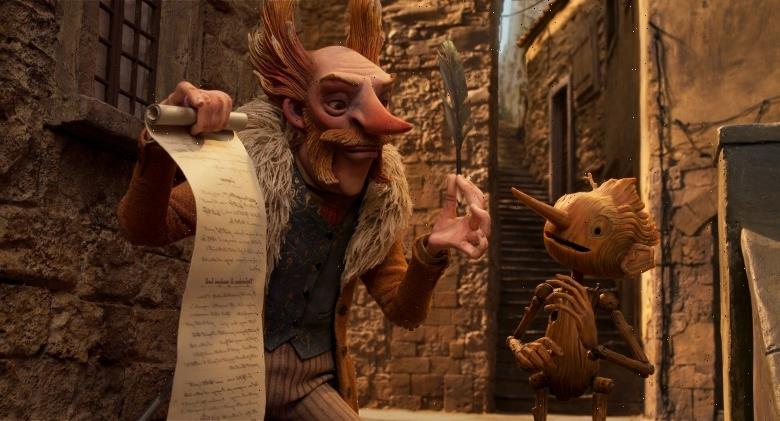 “Guillermo del Toro’s Pinocchio” reimagines the classic fantasy tale through the most beautifully-made stop-motion animation in years, a powerful and life-affirming father-and-son story about acceptance and love in the face of pain, misery, and fascism, and the filmmaker’s love of monsters in what is easily his best film in a decade.

The film is set in 1930s Italy, as fascism is sweeping the nation. We see how dangerous ideologies spread quickly and quietly at first, and what starts with just the town’s blacksmith being a bit too obsessed with uniformity and order gives way to hordes of fanatics screaming for Il Duce, kids being sent to boot camps, and everyone who is different being excluded – or worse.

In the middle of all this, we meet Geppetto, a humble woodcarver once beloved by all and with a happy outlook on life. Things change when he loses his son during a senseless air raid on the town toward the end of The Great War, turning Geppetto into a grief-stricken drunk who one day curses god and the natural laws, and decides to bring his son back to life by carving a child-size puppet. David Bradley gives a fantastic performance as Geppetto, but it is the animation team at ShadowMachine that pushes the boundaries of stop-motion animation to bring some of the best puppet performances in a film.

When Geppetto breaks down and cries by his son’s grave, you not only feel the pain in the vocal performance, but you see the puppet’s difficulty breathing, the trembling of his legs, the shaking of his hands; even the clothes move and flow naturally with the puppet’s body, something we rarely see in stop-motion. Just as Pinocchio’s wooden body is brought to life by magic in the film, so does del Toro, co-director Mark Gustafson and their army of over 40 animators breathe life into wooden (well, technically plastic and silicone) puppets to create some of the most stunning performances in a film this year — animated or otherwise.

Every character moves and behaves like a completely different individual, with the performances being animated in 2s (meaning animated half the frames that a regular film would) in order to bring their imperfect movements to life. They have quirks and itches, they make mistakes, and they shift weight when sitting down. Meanwhile, cinematographer Frank Passingham brings live-action lighting and blocking techniques to the film, making it look like it was shot with natural light and using negative space the way Hayao Miyazaki does.

In his grief, Geppetto makes a wooden boy. Like Victor Frankenstein, he tempers with powers he should leave alone, and his creation is unnatural, so this version of Pinocchio has more in common with Frankenstein’s cobbled-together look than the uniform, cute look from the Disney version. Indeed, Geppetto’s work is left unfinished when it comes to life, and he is kind of ugly, and moves more like a J-horror monster.

In several ways, “Pinocchio” is a giant middle finger to the Disneyfication of both the original Carlo Collodi story, and of fairy tales in general. Though this is a movie the whole family can see and get something out of, it never tones down the story for kids, nor does it talk down to them. The bones of the original tale remain, like Pinocchio’s time in the circus, the lessons he learns about being good, and the mess with the terrible dogfish (done here in a fantastic Ray Harryhausen homage), but here the story is reimagined as one of rebellion against expectations. The escape to the circus is not initially a sinful choice of laziness, but a desperate plea for acceptance and a rejection of the conformity and complacency of the fascist town’s school.

If you expected the whole “set during Mussolini’s Italy” thing to be pure window dressing, think again, because the threat of fascism informs every aspect of the film — down to Pinocchio’s circus acts eventually becoming propaganda shows supporting the army. The script, which del Toro has spent a decade trying to get made, initially with Matthew Robbins, now with “Over the Garden Wall” creator Patrick McHale, is all about disobedience, once again making what would otherwise be considered a villainous monster into the story’s hero, the only one who sees the error in people’s ways and rejects them.

Likewise, the film does not give Pinocchio the goal of being a real boy, and it does not shy away from the horrors of real life. The creature that gives Pinocchio life is not a traditional fairy, but a frightening and hauntingly beautiful being that looks like a biblically accurate angel, with wings filled with eyes — more like the Angel of Death from “Hellboy II.” When Pinocchio first wakes up, he is a bit of a nightmare, an overtly curious child thrown into a world he doesn’t know, a kid who smashes, breaks, and talks back with disrespect. His world is not one of easy moral lessons and rewards, but a world full of cruelty, death, and violence. Like “Pan’s Labyrinth” and “The Devil’s Backbone,” this is a movie set during a particularly cruel period, focused on how children coped and suffered. There is some rather gruesome imagery, and it is not only the villains who die horrible deaths.

And yet, “Pinocchio” is far from a sour or bleak film. This is a life-reaffirming movie about the beauty of life being fleeting, a movie not about a monster who wants to be a real boy, but about a monster that wants his creator to love him the way he is, and to be accepted for who he is. This is a movie about imperfect fathers and imperfect sons, about not meeting expectations, and learning to live with them, about accepting that life ends, that loved ones will leave us, and about embracing the time we had together. There’s horror, sure, but also warmth, laughs, and plenty of songs. Patrick McHale, who gave us the hit song of 2014 “Potatoes and Molasses” co-writes several songs with Roeban Katz and del Toro that are as cheerful and catchy as they are melancholic and profound. Meanwhile, Alexandre Desplat’s score is essentially a spiritual continuation of his “The Shape of Water” score, and it works wonderfully for the romantic tone of the film.

There’s plenty of comedy here too, particularly thanks to Ewan McGregor’s sarcastic, would-be philosopher Sebastian J. Cricket. The film gets a lot of mileage out of visual gags involving his tiny stature and penchant for being smashed, and it works every time. Where many star-studded animated movies feel like they lack actual performances, the cast here disappears into their stop-motion characters to the point where it is not always obvious who is playing who.

Guillermo del Toro has spent over a decade trying to get his dream stop-motion film made, and in that time he’s evolved as a filmmaker. Yet “Pinocchio” feels like the best mix of classic del Toro and new del Toro, with the wisdom and melancholy that comes with age and experience, yet his bright-eyed love of fairy tales from his Spanish-language films. Perhaps more impressive is how “Pinocchio” pushes the oldest form of animation to new places, and like the titular puppet, breathes life into inanimate objects.

Netflix will release “Pinocchio” in theaters this November before a streaming premiere on December 9.