Residents in Maribyrnong have begun the arduous task of cleaning out their homes following yesterday’s floods.

Piles of damaged household goods, furniture and clothes pile up on the verges along Oakland Street. The roads and footpaths are covered in a carpet of mud and residents are using brooms and rakes to sweep it away from their driveways and gardens. 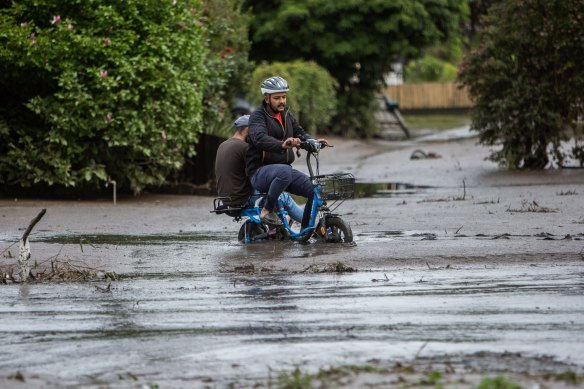 The impact of the flooding of the Maribyrnong River was still apparent on Saturday.Credit:Scott McNaughton

Mother-of-five Lam Loung was putting her family’s soiled personal belongings in plastic bags as her father-in-law carted cardboard boxes and waste in a wheelbarrow.

Neighbours came to lend a hand emptying the house, which had been completely inundated.

Loung said the water had come up so quickly they hardly had time to prepare. 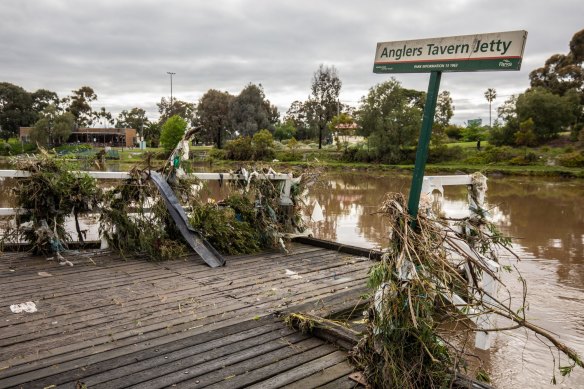 Damage to the Anglers Tavern after the flooding of the Maribyrnong River.Credit:Scott McNaughton

“In one hour it was up here,” she said. “So we quickly packed up. Me and my husband tried to lift everything up but the water was too high.”

A layer of mud and scattered personal belongings covered the floor of the two-storey home. Mattresses sat atop tables, an attempt to protect them from the water.

The floodwater came in with such force it lifted up the fridge and left it on its back. The fresh load of laundry hanging on the back porch was soiled, the veggie garden flooded.

Loung said her family had lost everything, including the food, clothes and her seven-month-old’s pram. Her children were staying with friends while they assessed the damage. 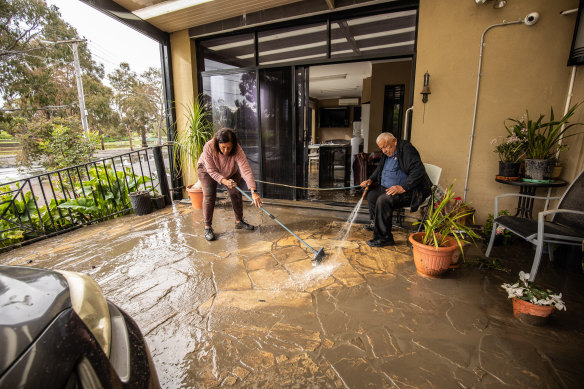 “They don’t know what’s going on but they have no clothes, no food, nothing,” she said. “I need to buy everything and start all over again like I’ve just arrived to Australia.”

Down the street, Joe Fakhri had enlisted the help of his son and brother-in-law to clean up the family home. He estimated the flood had caused $600,000 worth of damage.

Water inundated their entertainment area on the ground floor, damaging an industrial-grade kitchen, an indoor pool, memorabilia and his son Christian’s work tools. Three of the family’s cars were submerged.

Fakhri and his family gathered upstairs, offering shelter to neighbours as the water surged on Friday. He said the SES had rescued a handful of people from his carport roof.

“The windows have all warped because of the pressure of the water being so high. All the kitchen, an industrial kitchen, that’s all in the bin,” he said.

“That fridge down there, it was floating down here.”