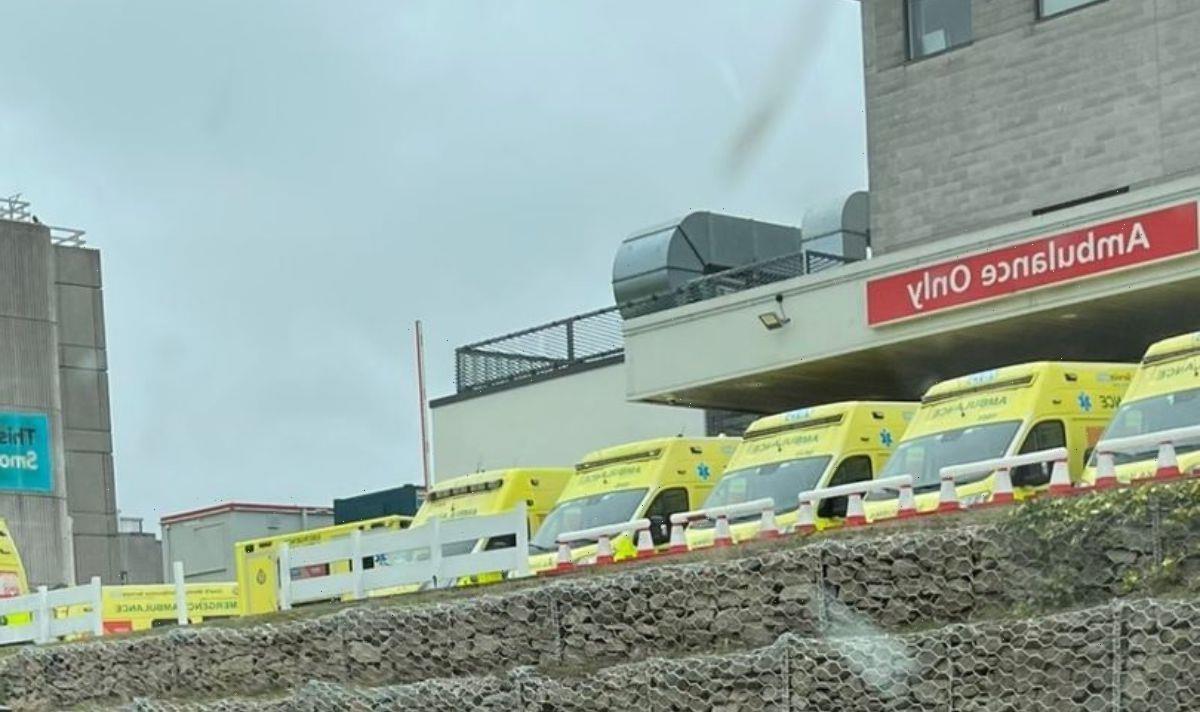 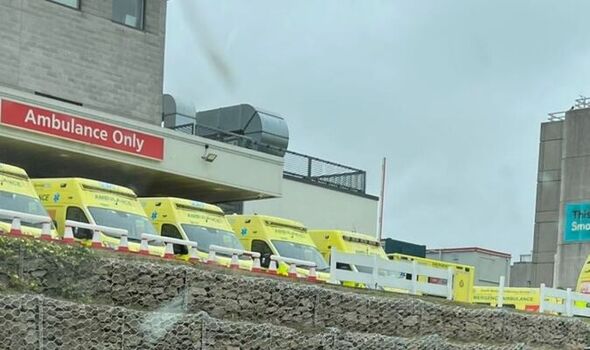 Sick and injured people are having to wait as long as 21 hours to be seen by the emergency services due to a lack of ambulances, it has emerged.

It comes as 30 ambulances were spotted queueing outside a hospital.

The vehicles were pictured at the Royal Cornwall Hospital (RCH) on Wednesday, October 12.

Cornwall Live spoke to some of the residents who have experienced hours-long waits for ambulances to get to them.

A pensioner lay in a cold street for nine hours due to a lack of available ambulances earlier this week.

An ambulance was requested at 1.35pm but did not arrive until 10.30pm.

Mary’s family repeatedly called the ambulance service but were told there simply was not one available.

She then remained in an ambulance sat outside Treliske for hours as there were no beds available.

Mary’s granddaughter Bethany said: “Our family are very shocked and appalled at the situation.

“It’s upsetting to see anyone you love in pain and injured, never mind your 72-year-old grandparent lying in the freezing cold for nine hours without any assistance at all.

“You hear stories about this stuff but you just don’t believe it.

“I think more people need to know about this because something needs to be done.

“I absolutely dread to think about what’s been going on to other poorly or injured people over Cornwall that we don’t hear about.”

She added: “The paramedics were just amazing, they were so apologetic and, of course, this is none of their fault at all.

“They are mentally, emotionally, and physically drained working in such tireless conditions.

“The main reason I am doing this and wanting to put the story out there is because the paramedics pleaded with us to do so, they want more people to make a stand and be made aware so that we can all speak up and hopefully a change is made.”

Emma Hardy told how it took 13 hours for an ambulance to arrive for her grandmother, who fell and broke her hip on the runway at Newquay Airport last month.

Once she was taken to Treliske Hospital, she was forced to wait in a succession of ambulances for a further 21 hours.

Emma described the wait as “inhumane”.

Emma had travelled from Swansea to fly to Alicante for a holiday with her grandmother, Brenda Hardy, 83, who lives in Goonhavern.

As they were about to board the plane, Brenda fainted and collapsed on the runway.

Emma said: “I can’t fault Newquay Airport as their first responders were on the scene straight away, but they didn’t want to move her as her hip was hurting.

“We phoned for an ambulance at 4pm and by 5.40pm she was still lying on the tarmac — she had blankets over her, but we couldn’t get anything under her to make her more comfortable, and she was getting much colder.

“We were told she had been upgraded to Priority 1, which should mean an ambulance would get to her in 18 minutes.”

The airport’s firemen stretchered Brenda into the executive lounge at 6pm as it was decided it would do her more harm than good being left on the runway.

An ambulance finally arrived at 4.50am, 13 hours after the initial call.

“My nan was saying ‘why is no one helping me, don’t they care?’ That’s excruciating to hear as a family member.

“She kept her sense of humour though and asked if the air ambulance, which is based next door, could take her as she pays her subscriptions to it, but they couldn’t self-deploy.”

When Brenda reached Treliske she waited for a further 21 hours, having to move ambulances four times, before she got a bed.

She was released from hospital on her 84th birthday on Monday after receiving an emergency hip replacement.

Emma said: “The wait time for an ambulance was inhumane.”

Cornwall Live reporter Lee Trewhela said: “My own mother, who is 83 and has advanced Alzheimer’s and mobility problems, had a fall last month.

“Although not an emergency, she definitely needed to be assessed.

“After ringing her GP and the NHS 111 helpline, I was advised to call for an ambulance – I waited with her for 21 hours before she was seen by a paramedic.

“I can’t fault any of the staff involved, who were all apologetic and the paramedic who eventually saw my mother was superb.

“The pressure the staff are all under was evident.”

Christine Evans, 69, has her own story concerning ambulance waits and was even transported from the Royal Cornwall Hospital in Truro to Derriford in Plymouth by an ambulance which made a round-trip from Bristol.

Christine, who lives near Probus, had a fall while clearing guttering at her home last month.

A neighbour was alerted by her barking dog as Christine attempted to crawl up a lane to get help.

Her neighbour rang 999 and was told there were no ambulances available and was asked if she could take Christine to Treliske herself, which she did.

On examination it was found that she had suffered seven broken ribs and needed to be transferred to a hospital in Plymouth for an operation.

She was placed in an ambulance for the journey.

She said: “I asked the ambulance man if it had taken them long to get down to me as I was just curious if there had been many traffic hold-ups.

“He said yes it had taken them over four hours.

“Then as I looked around I noticed on the window ‘Bristol Ambulance’.

“I asked ‘have you have come from Bristol to pick me up to take me to Derriford?

“‘ He said yes and they were going to drive back to Bristol once I had been dropped off!”

She added: “When I was given the all clear to go home, they said sorry there is no ambulance to take you home and all hospital transport is booked up, so could I get myself home.”

Fortunately, Christine’s niece was able to travel from Launceston to take her back home to Probus.

“All the staff that dealt with me were fantastic,” said Christine.

“I still cannot get over the fact the ambulance was brought from Bristol.

“The ambulance crew, nurses and doctors were all brilliant and very helpful, but so over-worked.

“The way the Government is going they are making it so much worse.

“They need to do something before the health service collapses altogether as there will be no one left.”

A spokesperson for the Royal Cornwall Hospitals Trust said: “Our staff are doing everything they can to get patients into the emergency department; none of us want anyone to experience long waits in ambulances.

“We currently have nearly 120 people in our hospitals, and a similar number in community hospitals, who are waiting to go home with support or to other care settings.

“If we could make those beds available, we would not have ambulances waiting.

“We are working tirelessly to get a steady flow of patients out of the emergency department and our assessment units throughout the day and, where needed, admitted onto our wards.

“We’re using our discharge lounge for those patients ready to leave hospital, to help us free up beds and ambulances as quickly as we can.

“The local health and social care system remains under sustained pressure and we are working together to keep people safe and make sure they can get the right care in the place that’s most appropriate for their needs.”

A spokesperson for the South Western Ambulance Service NHS Foundation Trust (SWASFT) said: “Our ambulance clinicians strive every day to give their best to patients, but our performance has not returned to pre-pandemic levels, partly due to handover delays at emergency departments.

“Health and social care services are under enormous pressure.

“We are working with our partners to ensure our ambulance clinicians can get back out on the road as quickly as possible, to respond to other 999 calls within the community.”