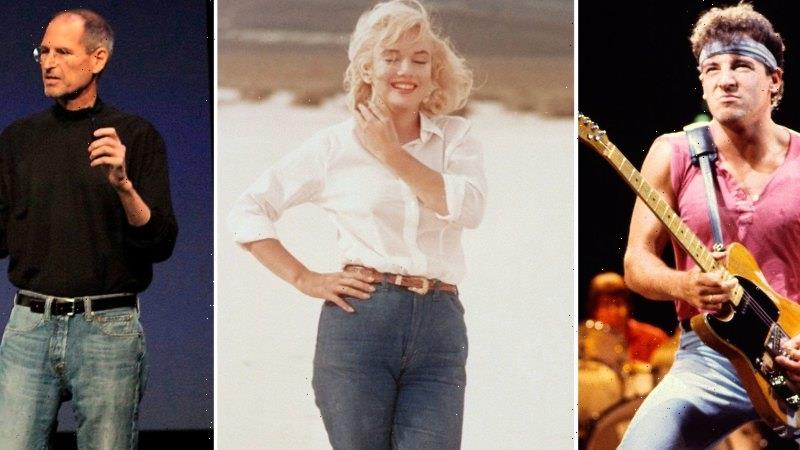 James Dean gave them a bad boy image. Marilyn Monroe showed off their sex appeal. Elvis wore the first black pair, while Bruce Springsteen chose them for the cover of Born in the USA. Tony Blair hardly seemed to be out of them in No 10.

Chances are, you have a pair in your wardrobe – I know I do – and whether they’re 501s, 511s, 701s or Ribcage, they will feature the familiar red tab, brown leather patch and button fly that make them one of the few brands that can legitimately lay claim to that horribly overused term: iconic. 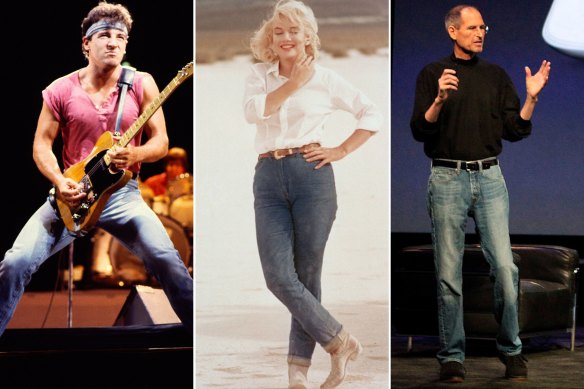 Bruce Springsteen, Marilyn Monroe and Steve Jobs have all been seen wearing a pair.Credit:Getty

A 19th-century pair, found in an abandoned mine in the American West and covered in white wax from the Victorian miner’s candles, has just sold at auction for US$87,000. The buyer, Kyle Haupert, is a 23-year-old vintage trader from San Diego who said, “I’m still kind of bewildered, just surprised at myself for even purchasing them.”

I’m not surprised, Kyle. If there’s one thing I know, as an avid Levi’s wearer, it’s just how this 150-year-old brand – started by a Bavarian immigrant who sold his blue jeans to California’s Gold Rush prospectors – transcends age, gender and trends. No other jeans have the capacity to unite Barack Obama, Alexa Chung and Jeremy Clarkson. From indie kids to fiftysomething dads; the fashion front row and Hollywood stars, there’s something about Levi’s.

I own six pairs and am rarely seen in anything else. Many other millennials feel the same: there are WhatsApp messages demanding to know exactly which style so-and-so was wearing at the pub last night. When Levi’s re-released its classic 501 style this year with a cropped ankle, Instagrammers (Levi’s has eight million followers) went wild.

Levi’s retail at around $170, though my favourite Kick Flares (sadly discontinued) cost US$10 in a bunfight at the New York flagship store, where I swiped them from under the nose of a teenager. I’m sure they found another pair – Levi’s now sells more than 1.25 billion pairs of blue jeans worldwide every year.

It’s even more extraordinary given that, by 1999, Levi’s was in distress. Younger shoppers turned to cult brands like Diesel, while Levi’s was associated with older men trying to cling to their youth. Profits fell from US$102.5 million in 1998 to US$5.4 million in 1999. It was a bitter pill for them to swallow. Who can forget Nick Kamen peeling off his 501s in a launderette in 1985? Back then, Levi’s held sway beyond the high street: The Clash had their only UK number one in 1991 with Should I Stay or Should I Go after it was featured in a Levi’s ad.

There was political power, too. In the 1950s, US students were banned from wearing blue jeans after Marlon Brando sported 501s in The Wild One and made denim seem dangerous. Levi’s responded by introducing white jeans. They crossed the Iron Curtain, becoming a cult symbol of dissent among Soviet teens in the 1980s.

They have barely changed since. It is, perhaps, that trend-dodging that has prompted the Levi’s comeback and seen the company anticipate US$10 billion of sales by 2027. There have been tweaks – zip flies and “boyfriend” styles – and clever collaborations with hot brands such as Ganni, Vetements and Comme des Garçons. But Levi’s has stayed true to what it is – which is why that 19th-century pair doesn’t seem unfamiliar. The jeans may no longer be aimed at blue-collar workers, but they bridge the divide between practical and cool. They feel rebellious while being unremarkable.

It’s why vintage ones have held their value. In 2018, an 1893 pair sold for almost US$105,000, while 1970s pairs upcycled by Re/Done sell for upwards of AU$1000. Levi’s introduced a “slow fashion” scheme in 2020 to buy back used jeans, spruce them up and resell them. It has started using organic and recyclable cotton, launching a “Buy Better, Wear Longer” campaign last year.

Good job that Levi’s seem to last forever. I may never have to buy another pair. Then again, I am going to New York next month…