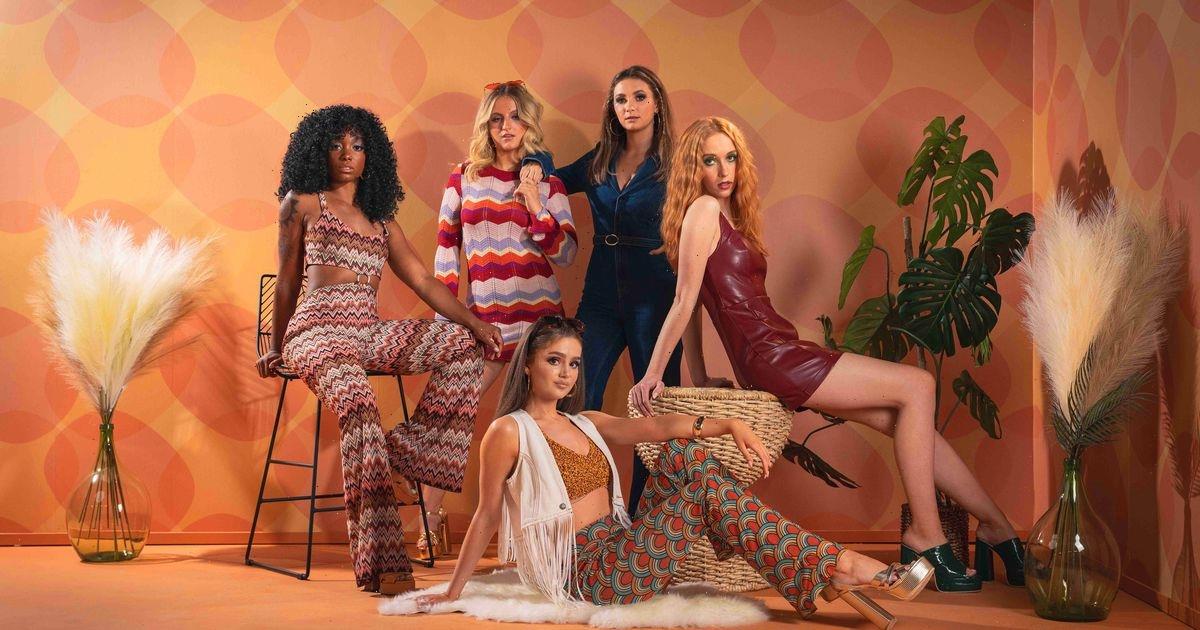 With just days left to go until Emmerdale airs its nail biting 50th anniversary episode, stars from the long running ITV soap have stepped back in time for a 70’s themed photo shoot to honour the decade which first introduced us to the Yorkshire village.

For Rosie, who is best known for playing Gabby Thomas on our screens, it was a dream come true as she revealed that the shoot was a nice change of pace from her usual storylines.

“Doing this shoot was so much fun for everyone involved. Choosing the outfits and getting all made up, really got us all excited for the 50th celebrations,” she said.

Dressed in a blue denim jumpsuit, complete with a statement belt detail, she continued: “There’s so much exciting stuff going on in the anniversary episodes, and it was nice to play around with costume and makeup to feel proper 70s vibes – with some tunes on too!”

“I’m so lucky to be involved in such an exciting, and a huge moment in history, for Emmerdale," she added.

Similar sentiments were also echoed by Katy Hill who plays Sarah Sugden in the soap.

Having been involved in a fair number of serious storylines over the years including her character’s need for a heart transplant, the chance to get a little more glamorous for a change was definitely a nice change of pace.

“It's been great fun being in the show during its 50th anniversary! Not only seeing all the exciting storylines that are going on, but also having the opportunity to do this fun 70s themed photoshoot,” admitted the star.

Rocking a pair of orange, blue and yellow flairs, Katy didn’t shy away from the 70’s aesthetic as she completed her look with towering silver platform sandals, a midriff baring crop top and a white fringed vest.

She then added: “We had a great time on the day getting our hair and makeup done 70s style, and the costumes were so cool. It was lots of fun jumping back in time for the day."

Daisy Campbell, who currently stars as pregnant Amelia Spencer in the show also couldn’t get enough of the shoot, as she admitted she was relieved to finally be able to ditch her fake pregnancy bump for a day!

Sporting a multicoloured striped mini-dress, the actress said: “I’ve been wearing a pregnancy bump for the last few months so it was great to glam up!”

Daisy also went on to praise the soap for allowing her to be part of its long running history.

“It’s such an honour to be a part of Emmerdale’s 50 years,” she said. “I feel unbelievably lucky.

“It was such a great day on the shoot especially as I got to share it with these four amazing ladies."

Describing the entire experience as “super cool”, Daisy even went on to admit that she felt she was born in the wrong decade, adding: “I really feel like I was meant to be part of that era!”

Newcomer Karene Peter, who plays Naomi Walters was also hugely grateful for the opportunity to take part in the shoot as she too celebrated being able to be part of the show’s milestone anniversary celebration.

Dressed in a brown, orange and cream zigzag jumpsuit complete with statement cutout midriff, Karene said: “We all had a great time on this shoot. Playing dress up as an adult can’t ever not be fun, really.”

She then added: “We got some amazing photos and it’s such an epic time to have joined the show, at such a pinnacle moment in its history!”

Chloe Harris actress Jessie Elland also loved being part of the special shoot as it made a poignant nod to the decade which had started it all.

“I absolutely loved the shoot,” she admitted.

Dressed in a slinky fitted red leather effect mini dress, she continued: “It was so great to see everyone all together in the outfits and dance around to some 70s music. All the girls have been doing such an amazing job on screen, so it was great to get to celebrate with them during this shoot!”

While much of what fans can expect in the episode is still a closely guarded secret, some teasers have revealed that a storm, cow stampede and even the death of a beloved character are due to take place.

The scenes will keep loyal fans glued to their screens as the aftermath of the explosive storylines leaves the village once again “changed forever”.

Emmerdale will celebrate its 50th birthday with an hour-long episode on Sunday 16 October.