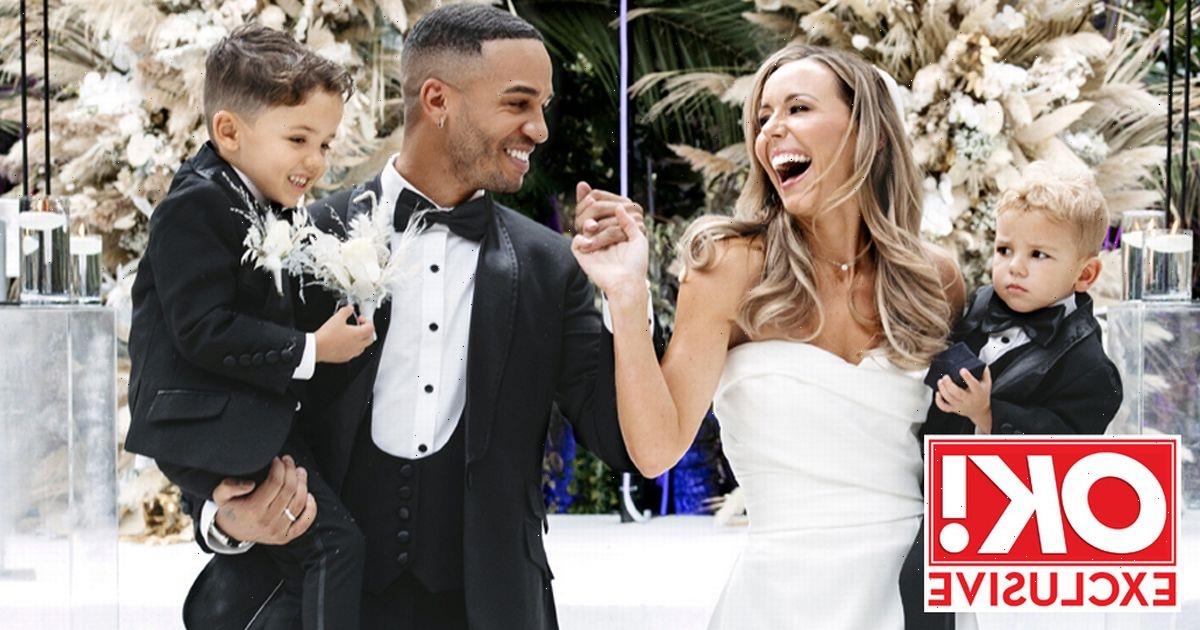 And our exclusive video of their nuptials shows the couple’s beautiful big day from start to finish.

From the moments that left their guests in tears and Aston’s romantic groom’s speech to their fireworks finale and incredible dance moves, we captured it all.

The wedding day kicked off at the Titanic Hotel in Liverpool’s Stanley Docks, where Aston and Sarah traditionally got ready apart.

Sarah was joined by her five bridesmaids – Emma, Louise, Charlie, Danielle and niece Claudia – while Aston was supported by his best man Berkan and his groomsman, Michael, Jeffrey, Dax and bandmate Marvin Humes.

Aston, 34, was also joined by his and Sarah’s sons Grayson, four, and Macaulay, two. Aston steadied his pre-ceremony nerves by turning his focus to the boys and steaming their suits and changing Macaulay’s nappy.

“Sometimes kids don’t like getting dressed so we made such a big thing about their suits and made it into a bit of a game,” Aston says.

“They were so wired and excited when we were getting ready, but then Macaulay fell asleep in the car on the way to the venue.”

Soon after Aston arrived at Liverpool’s Sefton Park Palm House guest began to take their seats for the 2pm ceremony, which started nearly an hour late after Sarah got stuck in traffic.

Sarah made her grand entrance through the gates of the venue in a Rolls Royce Phantom, before being walked down the aisle on the arms of her brothers Jason and Matt.

Meanwhile bandmate JB Gill had been given the very special role of officiating the ceremony for the couple and told their 155 guests about their love story before pronouncing them husband and wife.

The most emotional part of the day came during Aston’s nearly 40-minute groom’s speech, which garnered an equal amount of laughs and tears.

Speaking about Sarah and their relationship, Aston told their family and friends of their first meeting over 10 years ago: “I suppose I should start from the beginning. The beginning of our journey was at rehearsals.

"You came in in your purple DMs [Dr. Martens], a beautiful smile, magnetic energy and an infectious laugh.

“We actually spent the whole day just catching eyes from across the room. I was infatuated from the moment I saw you.

“We were on tour and we did have what I think and class as the most amazing connection. You soon become one of my closest friends without even realising it.”

He continued: “We were in Birmingham and I was like, ‘Yeah this is great and cool,’ and then we got in the lift and Sarah put in on me!

“She did, she planted one on me in the middle of the lift and I was like, ‘Ok wow, amazing, great’. Flash forward and I watch you with our boys and I don’t know how but I fall in love with you more every single time, every day.

“I know how truly lucky I am to have you and I promise you I know how lucky I am. I will treasure you every single day of your life that you will let me

“I’m now your husband and me finally being able to call you Sarah Louise Merrygold, my wife. I love you.”

With the speeches wrapped up it was time for the party to begin, with Sarah changing into a second wedding dress from Halfpenny London. and joining all their guests on the dancefloor.

But with the day running behind schedule, the couple admit their first dance went out the window, while they didn’t cut their wedding cake until the end of the night.

The celebrations continued until 1:30am and saw a spectacular fireworks display light up the sky, with Aston and Sarah the last on the dancefloor.

“The party was pure joy,” says Sarah. "I felt like I was just bouncing up and down for three hours. We didn’t even cut our cake until near the end.

"The venue let us push it an hour later because we were behind with the day. Aston told me I wasn’t allowed to chase the night, but I didn’t want it to end!”

“That’s my ruling for life,” Aston adds. “Always end on a high.”