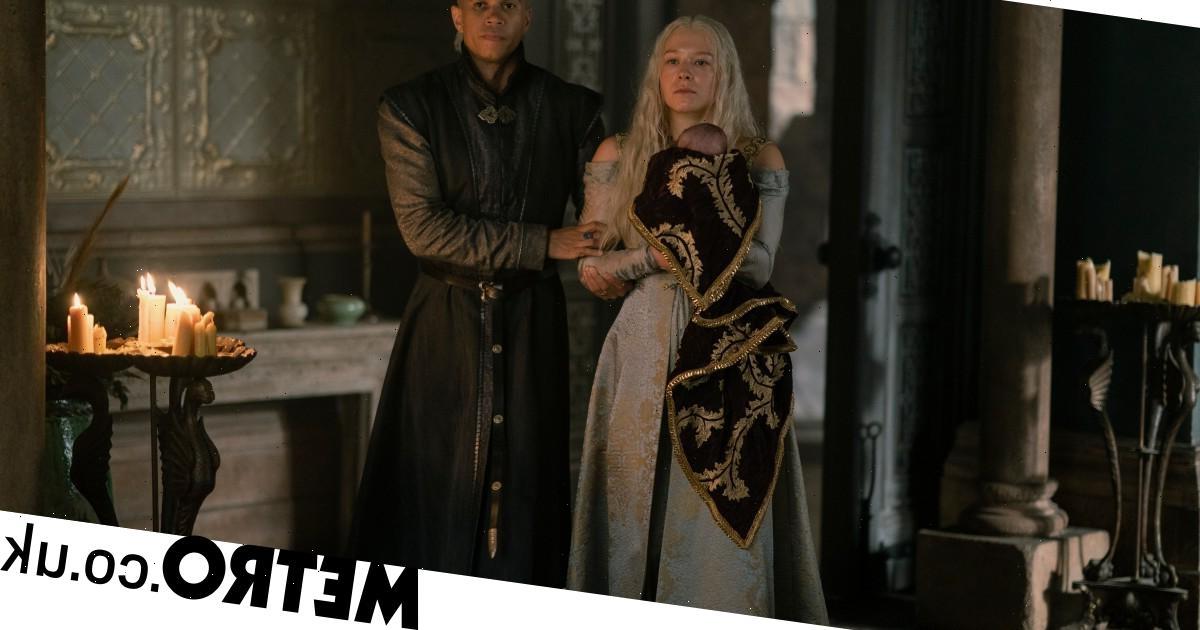 During House of the Dragon’s latest episode, Driftmark, the Game of Thrones prequel series played its best hand. And saved it right until the very end.

It spent an hour offering up a wealth of evidence that it can stand on its own two feet in the long-run as an adaptation of George RR Martin’s source material, with terrific central performances from Emma D’Arcy and Olivia Cooke, and then it completely tipped the scales in a manner that was so joyfully reminiscent of its wonderful parent series.

Just in case you hadn’t guessed: This piece contains spoilers.

Up to now, the writers have consistently used Martin’s fictional history novel Fire & Blood as a guide as opposed to a bible, but never to my surprise.

As someone who read Fire & Blood in preparation for the TV series, I’ve welcomed the writers’ decisions to play a little looser with Martin’s Targaryen timelines, but have never found myself open-mouthed in amazement.

Its adaptive decisions have made sense thus far, but I’ve simply nodded in appreciation. I know what’s coming down the line for this story, after all.

A crucial death has been moved up by a few years, a prolonged war was moved forward by a decade, a main character was aged down to her teen years to better emphasise the manipulative games played by men 40 years her senior. They’ve enhanced what has been a solid, immersive first season without ever shocking me.

In addition to that, allowing Laenor to live is a confident subversion of a trope that has dogged TV and film for too long

But the recent twist involving Laenor Velaryon (John MacMillan) and his true love, Qarl Correy (Arty Froushan), caught me completely off guard. I sat there, eyes wide with shock, relief, and heartache.

Not just because the writers have again exploited the carefully placed historical gaps in Martin’s text to good effect, but because they precisely executed a hugely consequential, off-book move so bravely and so suddenly in a way I didn’t think this show was going to attempt – at least not at this stage. It has added numerous new layers to the story that lies ahead.

Fire & Blood, for those unaware, doesn’t necessarily tell the truth of what happened during the Targaryen dynasty. It’s a reported history – a research text that Samwell Tarly (or his friend Jim Broadbent) could have picked up in the Citadel library many years later.

It’s written by a Maester Gyldayn, who peruses three separate recollections of the Targaryen kings and compiles a narrative by comparing and evaluating the likelihood of each report.

Gyldayn’s literary review says that, some time after Princess Rhaenyra (Emma D’Arcy) and Laenor’s wedding, Qarl murdered partner Laenor during an argument. The maester reporting on the incident, named Eustace, chalks it up to a jealous lover’s quarrel.

Another reporter, the dwarf Mushroom, posits that Daemon Targaryen (Matt Smith) paid Qarl to kill Laenor so that Daemon and Rhaenyra could be married.

The circumstances of Laenor’s death are vague – Qarl disappears, never to be seen again – but the fact of his death is left unquestioned. Laenor’s father, Corlys (Steve Toussaint), journeys to Dorne to collect his son’s body and the matter is closed.

From there, as was heavily implied as Alicent Hightower (Olivia Cooke) stormed towards Rhaenyra with dagger in hand, Corlys and Rhaenys (Eve Best) join Rhaenyra’s side in the upcoming civil war to protect their grandchildren.

I don’t want to spoil non-book fans too much, so I’ll say no more about that.

But by faking Laenor’s death, enabling him to escape forever with Qarl, House of the Dragon has thrown a dynamic all of its own making into the future alliance between Rhaenyra, Rhaenys, and Corlys.

Upon finding her son’s ‘body’, Rhaenys’ face turns hot and red with tears and grief – it is a face that will haunt me whenever we next see Rhaenyra and Daemon shaking hands and smiling with their allies from House Velaryon.

In addition to that, allowing Laenor to live is a confident subversion of a trope that has dogged TV and film for too long.

When Laenor introduced Qarl last week, I was already anticipating another round of painful discourse about the merits, or lack thereof, of queer representation in Westeros.

In an episode that received widespread praise, the incident left a sour taste in some mouths. Some commentators argued that House of the Dragon had fallen into a ‘Bury Your Gays’-shaped trap of its own making by brutally killing off one of its few openly queer characters, leaving Laenor devastated.

For those unaware, to ‘bury your gays’ in TV or film is to present and depict the deaths of queer characters in such a way that they are deemed to be ‘more expendable’ in comparison to their ‘heterosexual counterparts’.

Earlier this year, the finale of BBC show Killing Eve received backlash for its decision to kill Villanelle (Jodie Comer), its lead queer character, in the final moments of the series.

A sizeable number of media commentators, both queer and otherwise, have fairly argued the opposite, defending House of the Dragon on the grounds that Joffrey had not been beaten to death for his sexuality, but for being a serial trader of gossip who whispered in the wrong ear at the wrong time.

I wouldn’t personally accuse the show’s writers of burying their gays with Lonmouth’s death, but I was awash not just with shock and pain but with relief when Laenor made it out alive.

Great suffering was inflicted upon his parents as a result of his and Qarl’s relationship being able to flourish elsewhere (presumably somewhere in Essos), but watching him row to a new life instead of being stuck with the pointy end was a more fitting end for the TV version of Laenor that we’ve come to know.

And the potential ramifications for Rhaenyra’s side in the impending civil war are not only absolutely huge, but something that House of the Dragon’s writers can call their own.