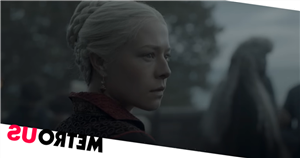 Warning: spoilers ahead for House of the Dragon episode 7.

The latest episode of Game of Thrones prequel House of the Dragon teased the breakout of war between the green and the blacks, with fresh wounds opened from the torrent of bloodshed.

The ending filled fans’ hearts with joy, as Ser Laenor Velaryon (John Macmillan) managed to make his escape with his lover Ser Qarl Correy (Arty Froushan) after faking his own death.

However, one element of the episode sparked numerous complaints from viewers – the fact that several scenes were so shrouded in darkness that they found it difficult to see.

The latest twists of the story included Prince Aemond Targaryen (Leo Ashton) sneaking off in the middle of the night to claim Vhagar, the enormous dragon that previously belonged to the late Lady Laena Velaryon (Nanna Blondell).

That same evening, Princess Rhaenyra Targaryen (Emma D’Arcy) and her uncle Prince Daemon Targaryen (Matt Smith) went for a walk on the beach, before sleeping together following their long-awaited reunion.

While many were thrilled to watch the drama unfold in the episode, several people expressed how annoyed they were that it was so difficult to see some of the most important scenes.

‘Why every episode does #HouseOfTheDragon have me straining my eyes at this dark screen?’ one person tweeted.

‘As for the most important parts of this episode being in the dark, jeez,’ another irked viewer wrote.

Someone else grumbled that the episode was ‘so dark’ it was ‘almost unwatchable’, adding: ‘Can’t see anything.’

House of the Dragon returns on Monday from 2am on Sky Atlantic and NOW.