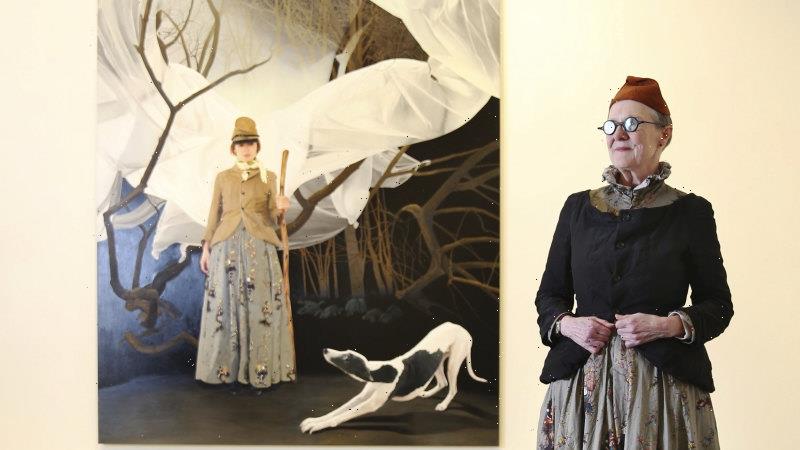 There was a fizz to last year’s Portia Geach Memorial Award for female portraitists, but this time the show feels slightly flat. A display is only as good as the entries submitted, and many artists seem to have settled on smaller, less ambitious works. Should size matter? Look at art long enough and you’ll find there are small works that seem immense, and large ones that feel awfully tiny, but a picture must be exceptionally good or bad to achieve such distinctions. Most of the Portia Geach entries are neither.

I wouldn’t say the works are devoid of quality, but there’s a safe feeling about this year, perhaps a lack of ambition. There are a lot of technically proficient portraits that don’t look like potential winners, with a few notable exceptions, such as Tsering Hannaford’s Justice Kelly, obviously an official commission, but a warm, skilful portrait that captures a sense of the sitter as an intelligent, good-natured person. This is partly a result of pairing a very detailed head study with a simplified treatment of the judge’s robes: flattened black, white and red against a neutral backdrop. By allowing the light to grow from the bottom of the picture to the top, Hannaford turns the face into a kind of revelation, making us feel Justice Kelly must be – literally – an enlightened character. 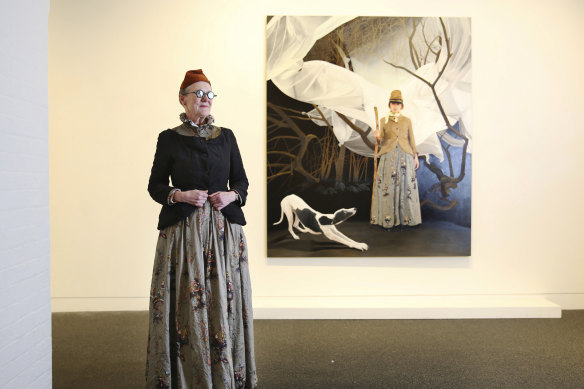 Another notably realistic painting that stands out from the crowd is Yvonne East’s The Day I Told My Truth (Self Portrait). For some, it may be too realistic, as the label tells us it’s a self-portrait painted after confronting a long-buried episode of sexual abuse. The statistics say this is not uncommon, but it’s rare that an artist feels the need to speak out in such a public forum. It’s a brave gesture, and a beautifully painted, no-frills portrait. The work gains a lot from being so obviously meaningful for the artist, rather than a dutiful likeness of a friend or stranger made for a competition. 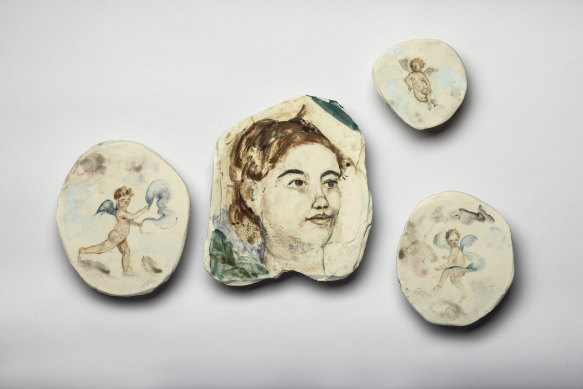 Sassy Park’s Ebony and the Angels.

Although Marie Mansfield’s Michael in the Studio might fit the above description, being a portrait of the artist with whom she shares a workspace, it’s arguably the best of the smaller, realistic pictures. Normally, I’d wince at another image of a sitter putting his hand to his chin in the time-honoured “thoughtful” pose, but Mansfield’s work has such an unforced simplicity it seems a natural gesture. Michael Simms is doing nothing much, but he feels more alive than almost anybody else portrayed in this show. 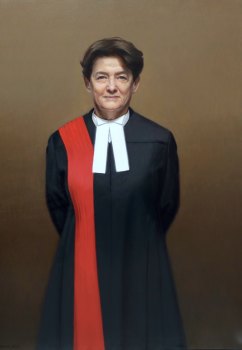 In a completely different way, Sinead Davies has produced a clever, appealing family portrait, in which the sitters and the setting are painted in a flat, unfussy manner, allowing each detail, each patch of colour, to stand out with exceptional clarity. The Jollys can feel well satisfied with their choice of portraitist.

This year’s winner, Lynn Savery’s Kindred Spirits, would have been hard for the judges to ignore. Not only is it the biggest picture in the room, but it has been painted in the most immaculate style, with all sorts of compositional complexities. Aside from the sitter, Eloise da Silva, who is captured with near-photographic precision, huge care has been taken with different kinds of cloth, pieces of wood, swirls of diaphonous drapery, a short-haired dog, and a striking tracery of twigs and branches that form a frieze in the background. There are messages relating to fashion and environmentalism, often viewed as opposite ends of the spectrum. It’s almost too much – an example of obsessive-compulsive creativity. The artist could have done half of this and still come up with a prize-winning portrait.

There have been many occasions when portrait prizes have been spoiled by odd, gimmicky pieces clamouring for attention, but this show might have benefited from a few more unorthodox entries. The most innovative contribution is probably Sassy Park’s Ebony and the Angels, a portrait of ceramic artist, Ebony Russell, surrounded by cherubs, painted on four small porcelain discs. The wall fragments of Pompeii supplied the inspiration for a modest but ingenious work, that pays homage to the artist and the sitter’s medium of choice. 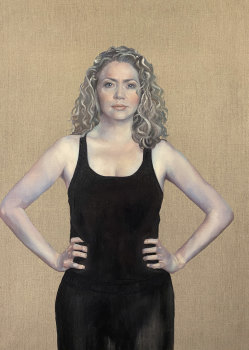 Yvonne East’s The Day I Told My Truth (Self Portrait).

Sally Anderson’s Guido Holding Folding Moulding is another stand-out. Ostensibly a portrait of her artist husband holding their child, there’s a metaphysical dimension to the work, with a sculpture on a pedestal, a jug with flowers and a red, flag-like curtain taking up significant space in the composition. The play of curves and fractured planes adds to the mystery of the picture, as we feel we are looking through multiple doorways or windows, projecting a dream-like atmosphere.

Susan O’Doherty’s Fiona Lowry with a Red Cushion is an apparently straightforward likeness that offers up its complexities in a gradual fashion. The artist’s use of solid planes of contrasting and complementary colour is trickier than it seems. So too is the contrast between the sitter’s neat black jacket and her translucent, striped skirt, in which her legs give the impression she could be sitting or standing. Such awkwardness can detract from a picture but here it seems appropriate to the four-square nature of the image.

The most flamboyant work in the show is probably Esther Erlich’s Atong, a portrait of the Sudanese-born photographic artist Atong Atem, herself an exponent of vividly coloured portraiture. Even though this is a half-body study, Erlich has emphasised the sitter’s height by having her long arms enfolded within the rectangle of the picture, as if she can barely squeeze them in. An outline in gold, with the suggestion of wings and a crown, denotes an extroverted personality. With some portraits the distance between artist and sitter is palpable, but in this instance one can feel how warmly Erlich responded to her subject.

There are 54 works in this year’s Portia Geach, enough for everyone to satisfy their personal taste. Having been awarded every year since 1965, the prize is one of the most venerable in Australia, although its original motivation of giving greater visibility to female artists, now seems beside the point. During the past few years, the percentage of women in institutional shows has risen to a level where they are generally in the majority. The National Gallery of Australia has held two massive surveys devoted exclusively to female artists, and the forthcoming instalment of Primavera at the Museum of Contemporary Art will feature six emerging female artists and no males. The next iteration of the contemporary survey, The National, will be assembled by five female curators. With the tide turning so decisively the Portia Geach feels increasingly quaint, a memento of the bad ol’ days when women were denied a fair go. Perhaps this is why the exhibition is so devoid of edginess – there’s nothing left to rebel against.

Portia Geach Memorial Award 2022 is at the S.H. Ervin Gallery until November 6.

The Booklist is a weekly newsletter for book lovers from books editor Jason Steger. Get it delivered every Friday.