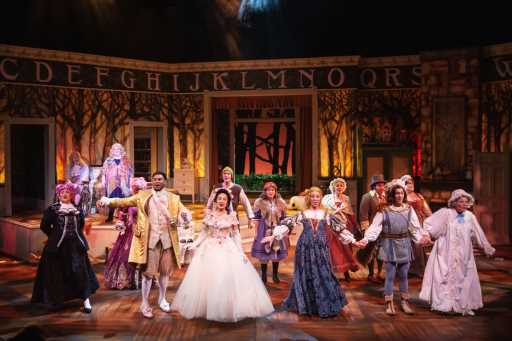 The word this summer out of a pandemic-bruised Broadway was promising. The Encores! production of “Into the Woods” wowed and charmed. The news closer to home is even more welcome.

The Arvada Center’s production of the Stephen Sondheim-James Lapine musical about fairytales Grimm, is glorious and otherwise delights.

Before the new season began, recently named artistic director Lynne Collins confessed that musicals were not necessarily her wheelhouse. It turns out, a way with actors, intelligence and wit are. (Those who attended the plays she directed or supported at Arvada’s Black Box over the past six years already knew that.) Cast with beloved Arvada regulars as well as other local actors making their debuts on the theater’s main stage, “Into the Woods” is hilariously wise and, at many a revealing moment, touching. Trent Hines directs the finely attuned orchestra.

Things begin benignly enough in a child’s bedroom. Make that a willful child’s bedroom. The little girl’s governess (Leslie O’Carroll) is having a dickens of a time getting her charge to bed. (Little Girl will be played by Hazel Hershelman, Alaina Isabel Redman Pollack and Hailey Sprague.) When the governess leaves, the girl opens an oversized volume of fairytales.

If you’re starting to wonder at the incessant namechecking of cast members, it’s because this ensemble shines en masse. Even so, Cole — of the resonant voice and handsome mien — who portrays both Cinderella’s beloved prince and the Wolf, is ridiculously satisfying. His rather disquieting “Hello, Little Girl” might have Det. Olivia Benson on the case.  But Sondheim and Lapine make clear that this Little Red Riding Hood (Anysley Upton) is nobody’s victim, though she is special.

And deBree’s beautifully voiced Witch is too cruel to be kind. Yet she has her moments of motherly, albeit wrongheaded, feeling. “Stay With Me” begins with her demand for the kidnapped Rapunzel’s fealty, but the song softens, getting at the underlying tensions that course through the musical. The good will have their foibles, their doubts. The baddies will display glimmers of humanity. Desires take us toward what we want — or believe that we do.

The Arvada Center has billed “Into the Woods” as a tribute to Sondheim; the musical theater titan died in November. The company and the production make good on that promise.

As the opening number ends, the woods appear outside the Little Girl’s bedroom windows. That flashy gesture is only the first in several enchantments engineered by the Arvada Center’s craft veterans. That thicket comes courtesy of set designer Brian Mallgrave. Its beckoning and foreboding are the work of Shannon McKinney’s teasing of light and hues; she also calls forth a critical flock of white-light pigeons.

Cinderella’s stepsisters and stepmother are beautifully clad by Clare Henkel and bewigged by Jocelen Barrett Smith, who is also responsible for the makeup that takes the Witch from crone to imposing knockout. Sound designer Max Silverman’s booming fee-fi-fo-fum reverberations — might they be giants?

Act II puts to the test fairytale promises of happily ever after. Some upstanding characters will perish, victims of unintended consequences. Others will have to rely on newly fortified versions of themselves or freshly formed alliances. These wrinkles of wish fulfillment were prefigured by Sondheim and Lapine from the get-go, or at least the show’s second number, “Cinderella at the Grave”: “Do you know what you wish? Are you certain what you wish is what you want?”

From the company’s spectacular opening salvo (well choreographed by Grady Soapes) to the earned tenderness of the penultimate number, “No One Is Alone,” as well as the company’s final summation of the beautiful complexities of life beyond the fairytales, the lessons here feel pointed, necessary and timeless.

Subscribe to our weekly newsletter, In The Know, to get entertainment news sent straight to your inbox.