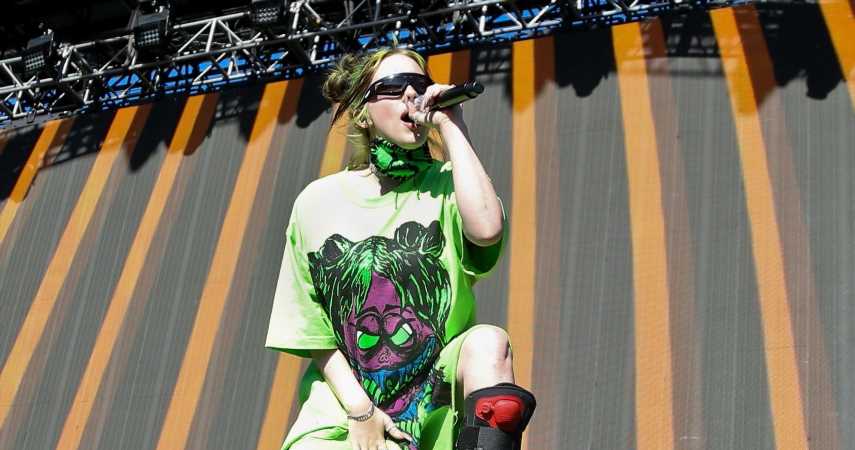 Billie Eilish has amassed success and a massive $30 million net worth at a young age, and while she prefers to live in her childhood home in Los Angeles, she also has new digs in Glendale.

Born to artists Maggie Baird and Patrick O’Connell, Billie Eilish was exposed to music and creative arts from a young age with her older brother Finneas. She began writing at 11 and, within two years, wrote and produced music with her brother. Eilish’s success was slowly on the rise after the release of her two EPs and performances at various festivals. After the release of her debut album When We Fall Asleep, Where Do We Go? in 2019, it landed straight on the No.1 spot on Billboard 200, and she simultaneously broke many records with her music. Billie Eilish became the youngest artist to sweep every general award category at the 2020 Grammys and won an Oscar in 2022 for her James Bond theme track song.

Billie Eilish has seen more success than many long-established musicians in the industry, but that has only humbled the young singer who remains close to her producer brother and parents. Her childhood home has been an essential part of her life, while she has also stepped foot outside and purchased a new home. Let’s take a look at the houses owned by Billie Eilish.

Billie Eilish’s fame skyrocketed while she was still a teenager, and while the singer could be expected to move out and get a separate home, she preferred to live with her parents, which humbled her in many ways. According to Re-Thinking The Future, her parents, Maggie and Patrick, purchased the home in Highland Park, Los Angeles, in 2002 for $240,000, but the house is now valued at a whopping $800,000.

The rustic home is built in a traditional typology structure seen in Los Angeles in 1912 and remains just as charming. The modest home features two bedrooms, one bathroom, a living room, and a simple modular kitchen. Since her father is a musician and her mother was a voice actor, Billie and her brother Finneas grew up with three pianos in their childhood home. Her brother also revealed that his parents let them take the two bedrooms while they slept on a futon in the living room.

Her childhood home has become iconic because it is not only her living quarters but also the location where she and Finneas recorded the debut album When We Fall Asleep, Where Do We Go? and produced it. During a segment of Carpool Karaoke for The Late Late Show With James Corden, Eilish took the host on a tour of her tiny home and showed him the important rooms. Her brother’s old bedroom was their makeshift studio painted with white and lilac walls. It had a single bed with multi-colored cushions and a piano next to a red desk chair, as noted by The Sun. One of the walls in the room also has a track list for her debut album when the sibling duo was deciding their song titles. While the singer did not reveal her bedroom, she admitted it was red and housed her pet tarantula.

Billie Eilish moved out of her parent’s home after her brother Finneas purchased two pricey properties in Los Angeles. Located a 10-minute car drive from Highland Park, where her parents live, the singer purchased an equestrian ranch in Glendale for $2.3 million. The home is not directly registered under Eilish’s name as she wanted to keep the purchase private. It is named under an office in New York where her business managers work. Eilish is known for her love of equestrian riding and horses, so it is no surprise that she bought a ranch. As mentioned by Hello Magazine, singer Leona Lewis purchased the property in 2013 and carried out several renovations, including remodeling the important rooms.

The supremely private property is located in a cul-de-sac invisible from the streets and is secured with 10-feet tall gates, brick pillars, and a top-end security system. The primary home is on a single floor with three bedrooms and three bathrooms. Following the trend of many Californian residences today, it has an indoor-outdoor lifestyle structure with foldaway glass doors and hardwood flooring. Lewis had updated the kitchen, which now has white Shaker cabinets and stainless steel appliances. Additionally, the large swimming pool in the backyard had also been upgraded.

Spanning 0.72 acres of land, the primary residence is not the only home on the estate. There is a guest house near the living quarters and a horse keeper’s apartment, as stated by Dirt. Equipped to handle horses, the area has a four-stall stable, area and feed room, and a tack room. It comes with a paddock to exercise the horses, while the goat pen is to keep additional animals on the property.

While making her first big real estate purchase, Billie Eilish considered her interests and love for horses with the ranch. Her home might be steeped in many amenities, but the singer prefers to call her childhood home a primary residence. Just a short drive away from her parents, Billie Eilish always keeps her family close.

READ NEXT: A Peek Inside Paris Hilton’s $8 Million Malibu Mansion