The Conners‘ main title sequence just got a major overhaul.

The Conners Season 5 Intel — Get Spoilers 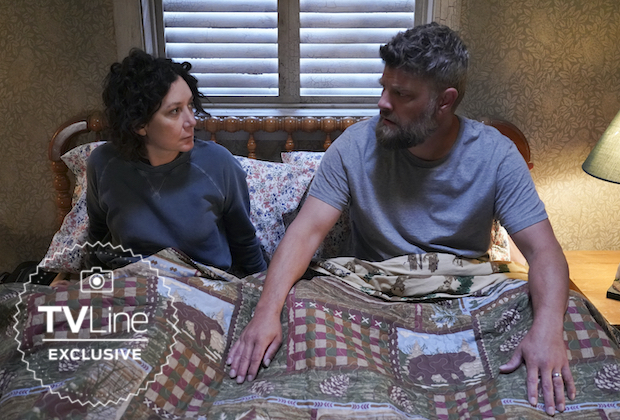 The update was inevitable following the departure of legacy cast member Michael Fishman, who played Dan’s son DJ in Seasons 1-4. TVLine exclusively reported that the Roseanne alum had exited the sitcom in August.

During Season 5, viewers will learn that DJ left Lanford to reunite (off screen) with Geena.

The fact that the Roseanne offshoot had yet to change its main title sequence seemed awfully odd, especially when you considered that A) Roseanne featured 11 different main title sequences during its 10-season run, and B) the scene shown in the Conners‘ opening credits during Seasons 1-4 represented the family’s first sit-down breakfast after Roseanne Conner died.

“We really haven’t changed or altered those in any way [since Season 1],” executive producer Bruce Helford acknowledged during an October 2021 interview with TVLine, shortly after Dan married Louise. “Honestly, I imagine if we did alter them, we would be including [Katey Sagal].”

But alas, Sagal remains a guest star, not a series regular, in Season 5, which means no Louise in the opening credits. Also M.I.A. is Jackie’s new husband Neville, played by fellow guest star Nat Faxon.

Wednesday’s premiere saw newlyweds Darlene and Ben, and Jackie and Neville, embark on a joint honeymoon, where their cost-saving measures contributed to a tension-filled getaway. Elsewhere, Dan, Becky, Harris, Mark and Beverly Rose spent a night at a waterpark, where Harris and Mark bonded over tequila after Mark found out that his ex-boyfriend was dating someone else.

What did you think of The Conners‘ Season 5 opener — and new main title sequence? Grade the premiere via the following poll, then drop a comment with your full review.