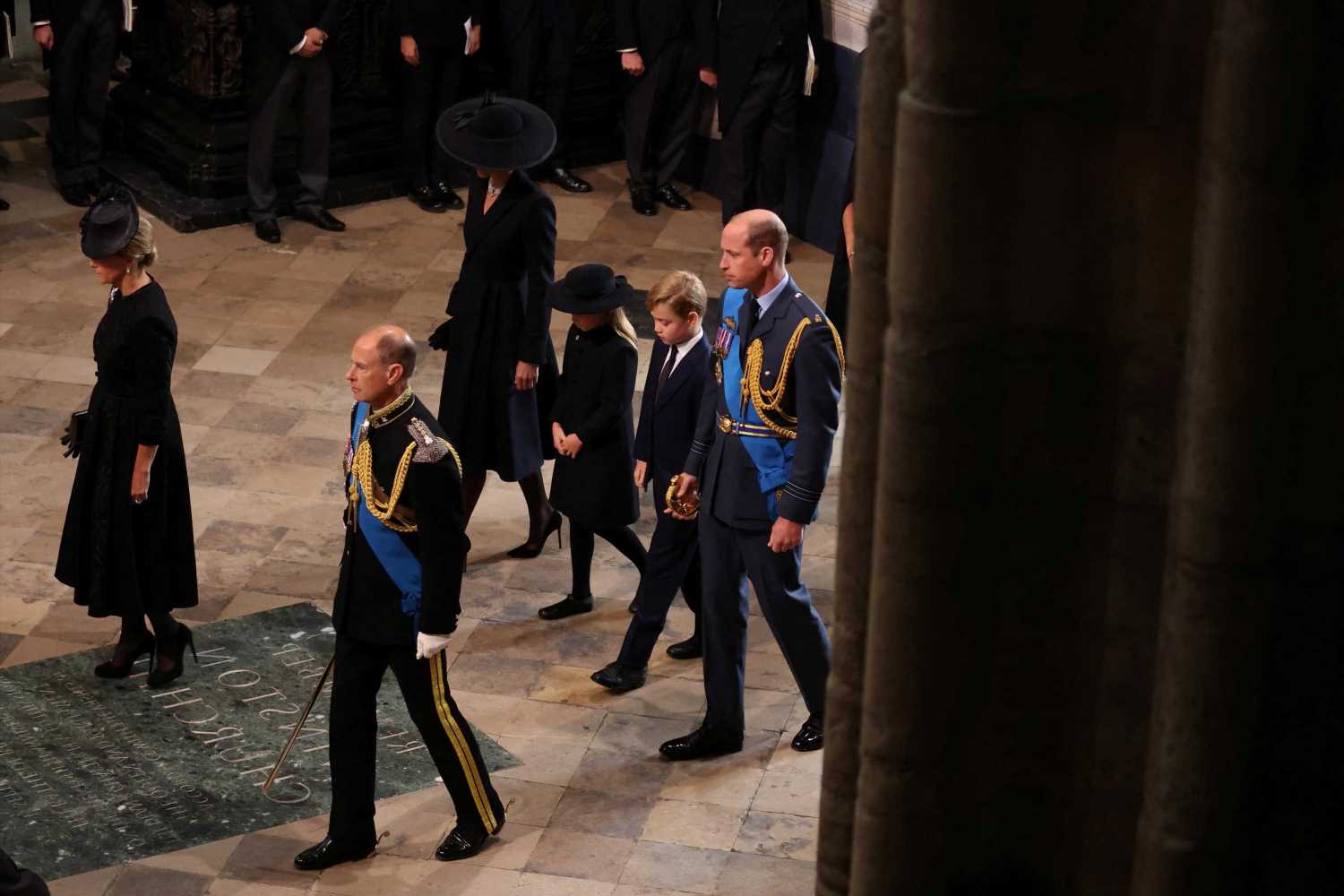 PRINCESS Charlotte and Prince George today solemnly walked behind their Gan-Gan's coffin in a sombre procession at the Queen's funeral.

The children, who were the youngest mourners at their great-grandmother's state funeral today, walked with their parents Prince William and Princess Kate behind Her Majesty's coffin. 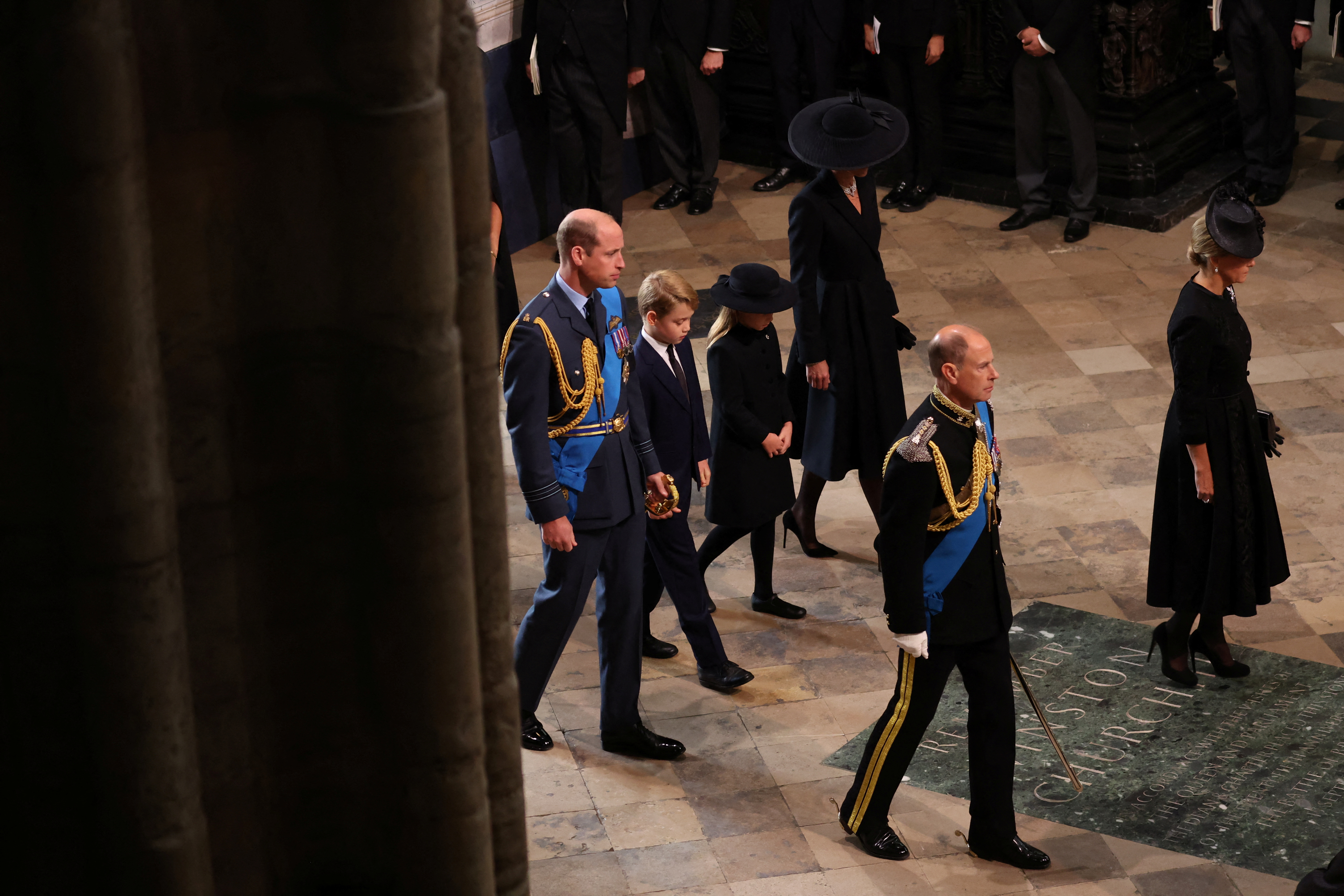 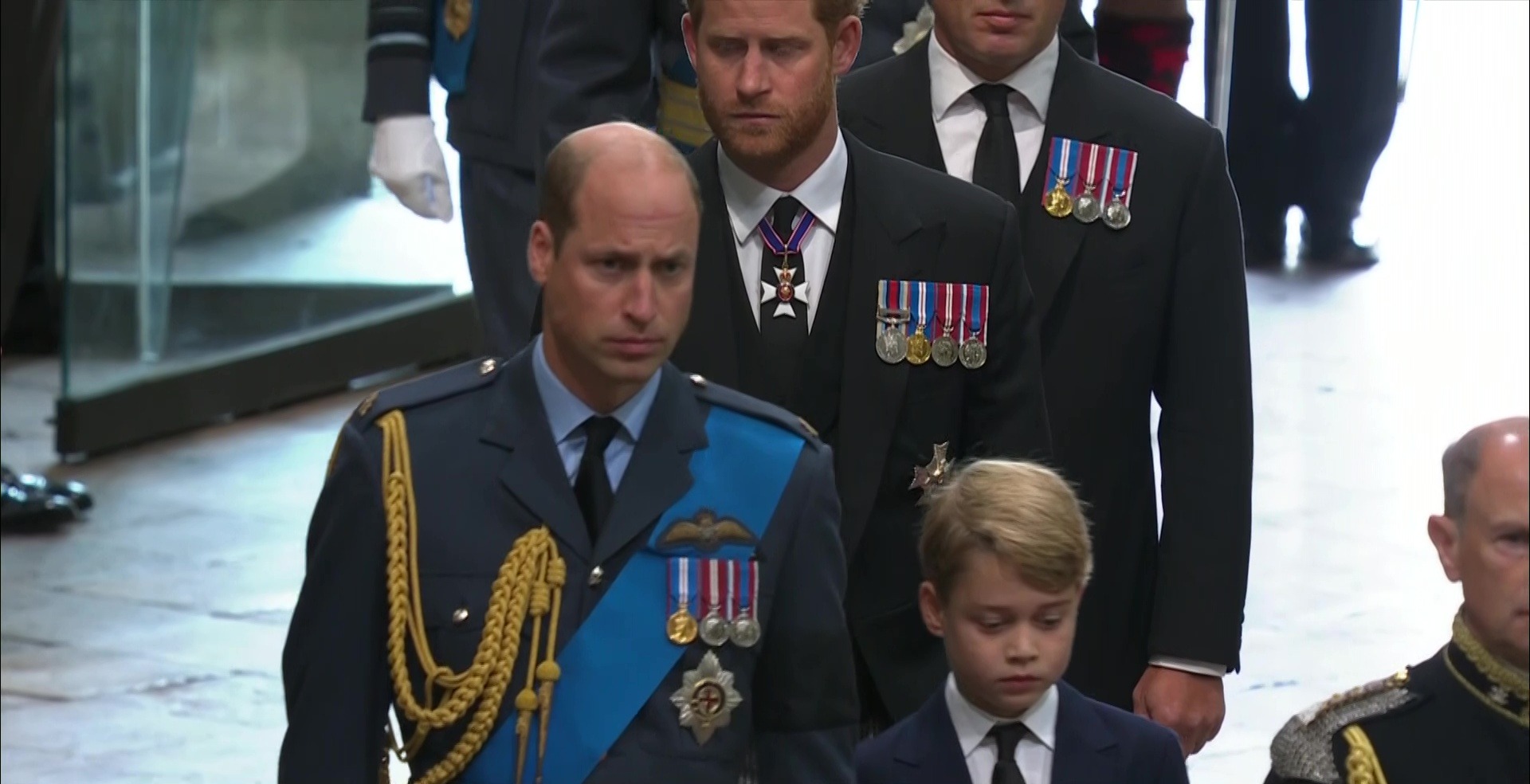 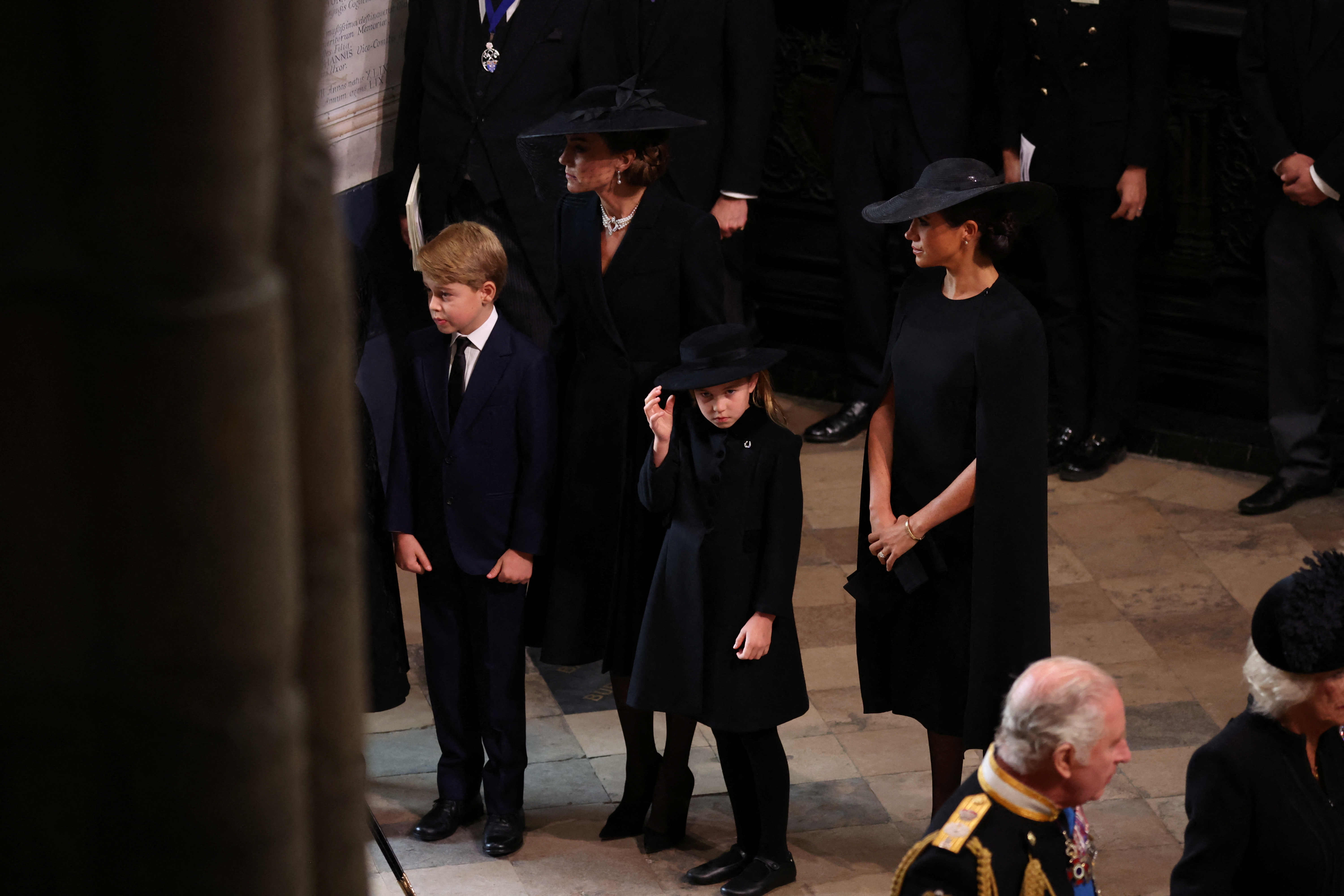 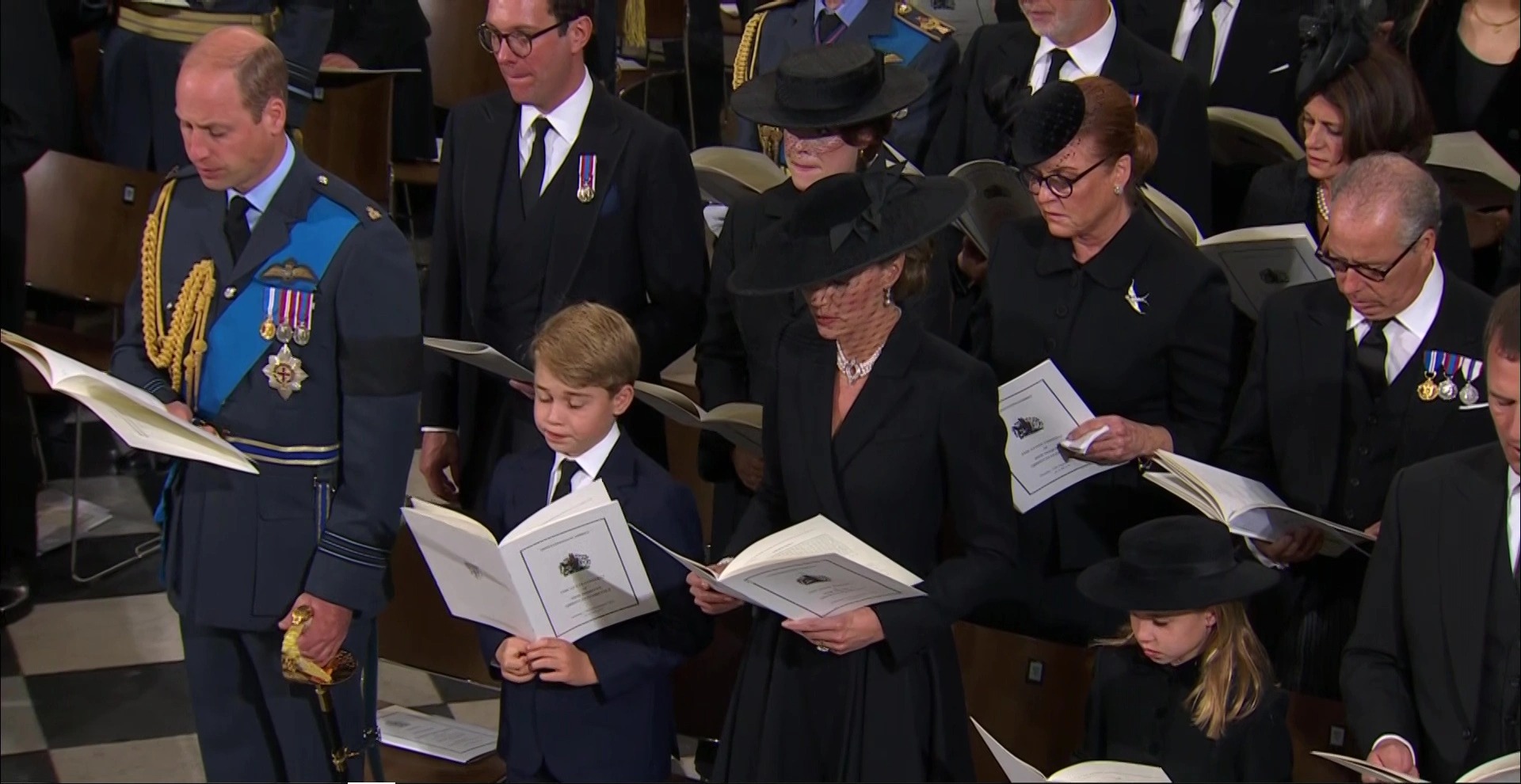 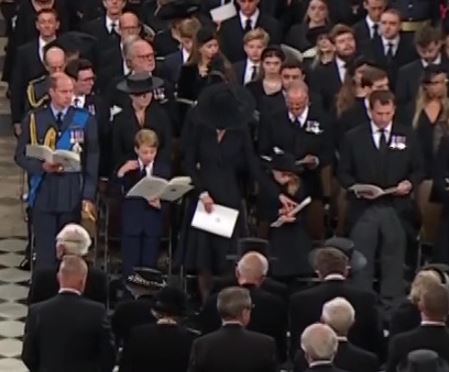 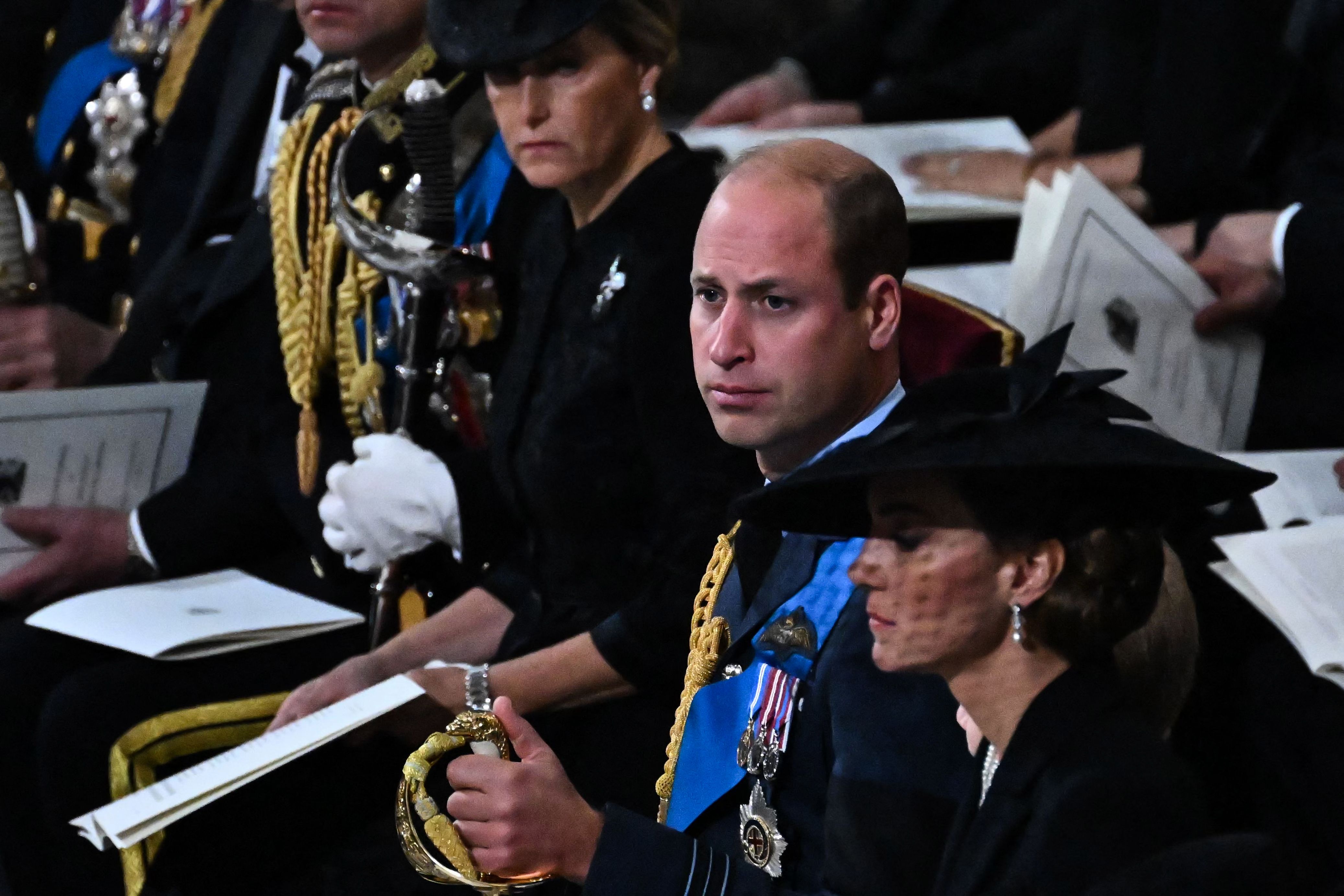 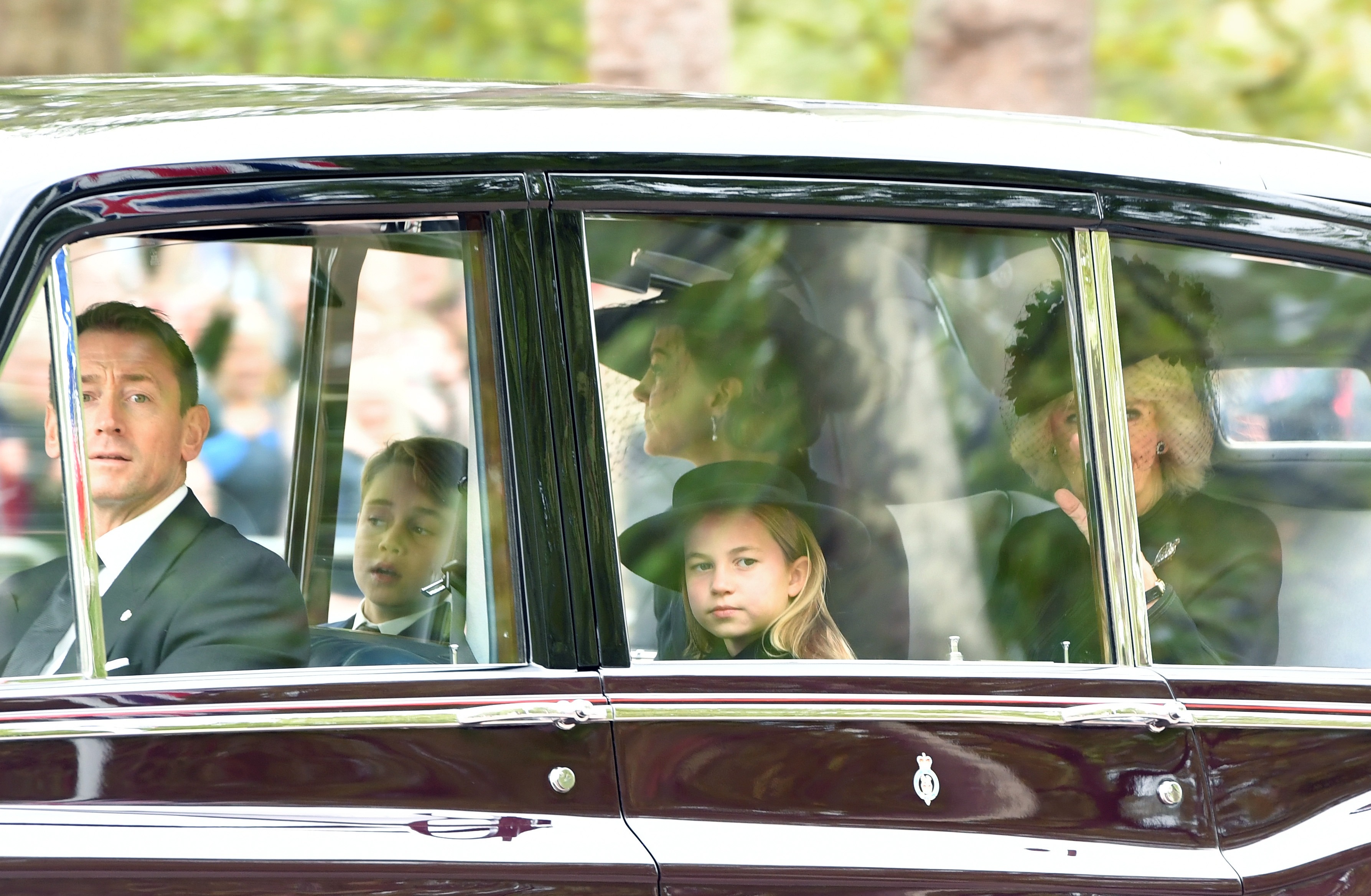 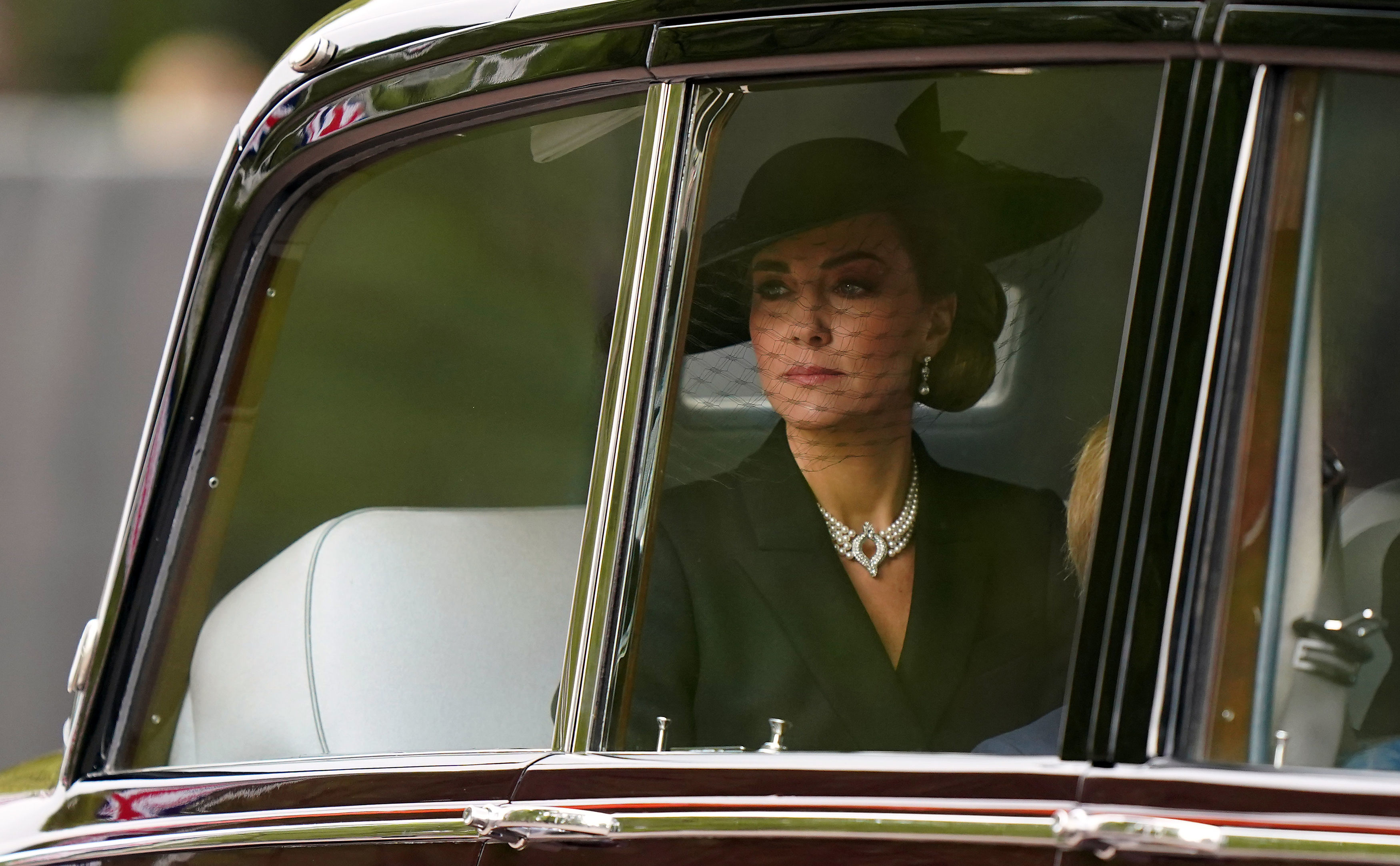 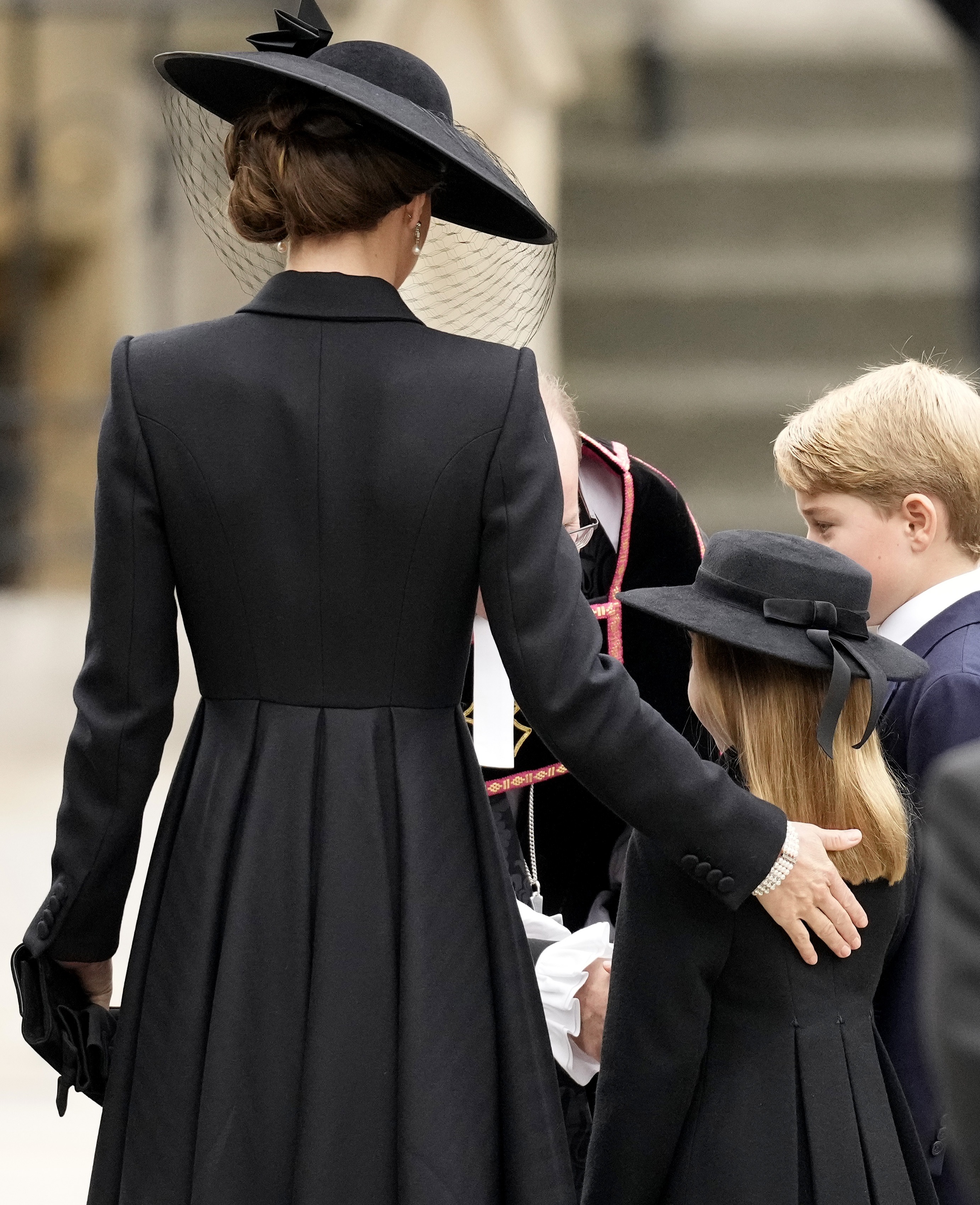 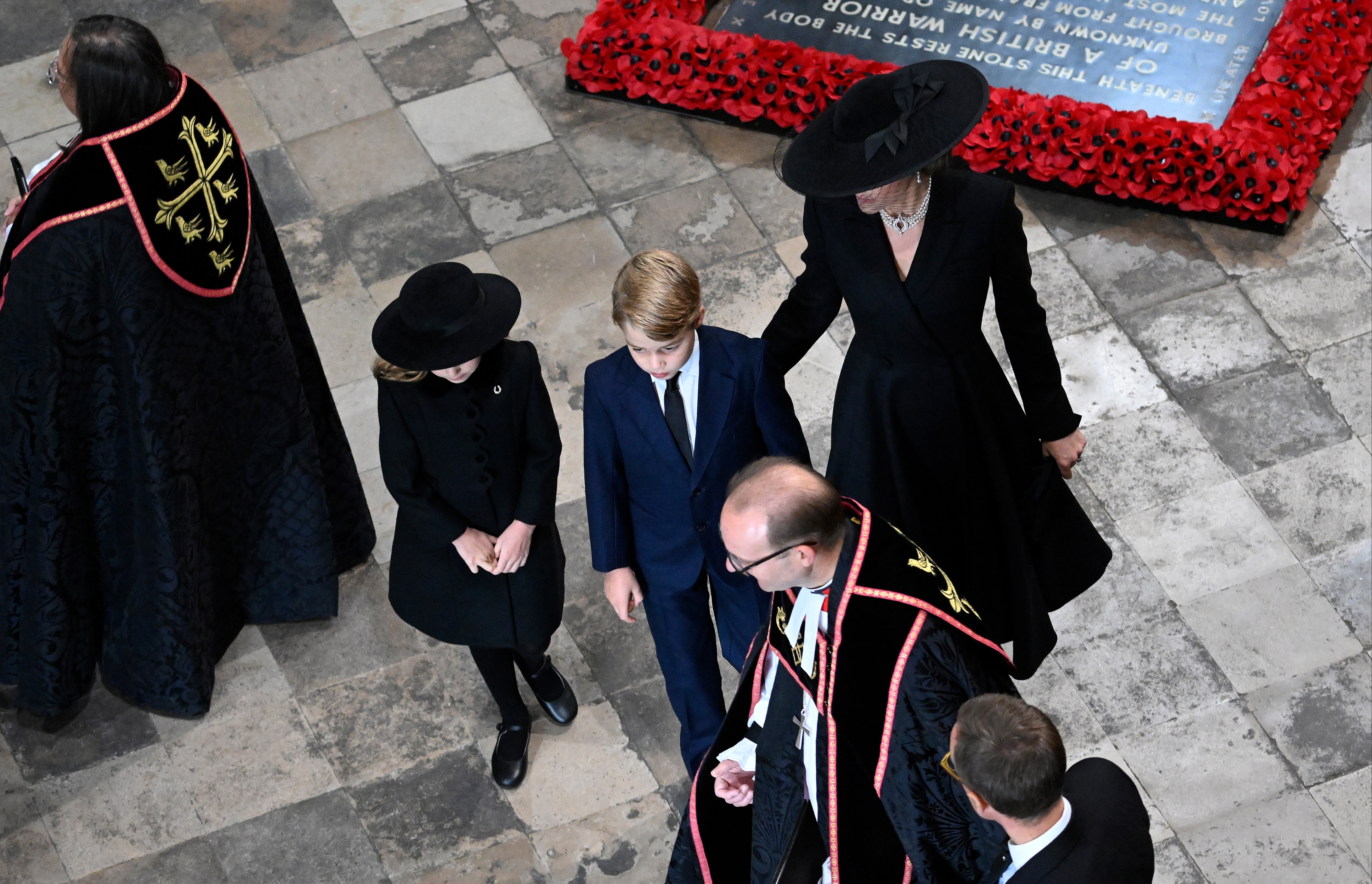 The children then stood and sung hymns with the 2,000 strong congregation – with mum Kate seen helping her daughter follow along the service.

The youngsters have been dressed in black outfits for today's services, with Charlotte wearing a hat like mum Kate.

In moving scenes, George, nine, and Charlotte, seven, had looked solemn as they walked alongside their parents into Westminster Abbey – with the youngest Louis, 4, staying at home.

Their late inclusion is believed to be the idea of parents Prince William and Kate who thought it important they attend the historic occasion. 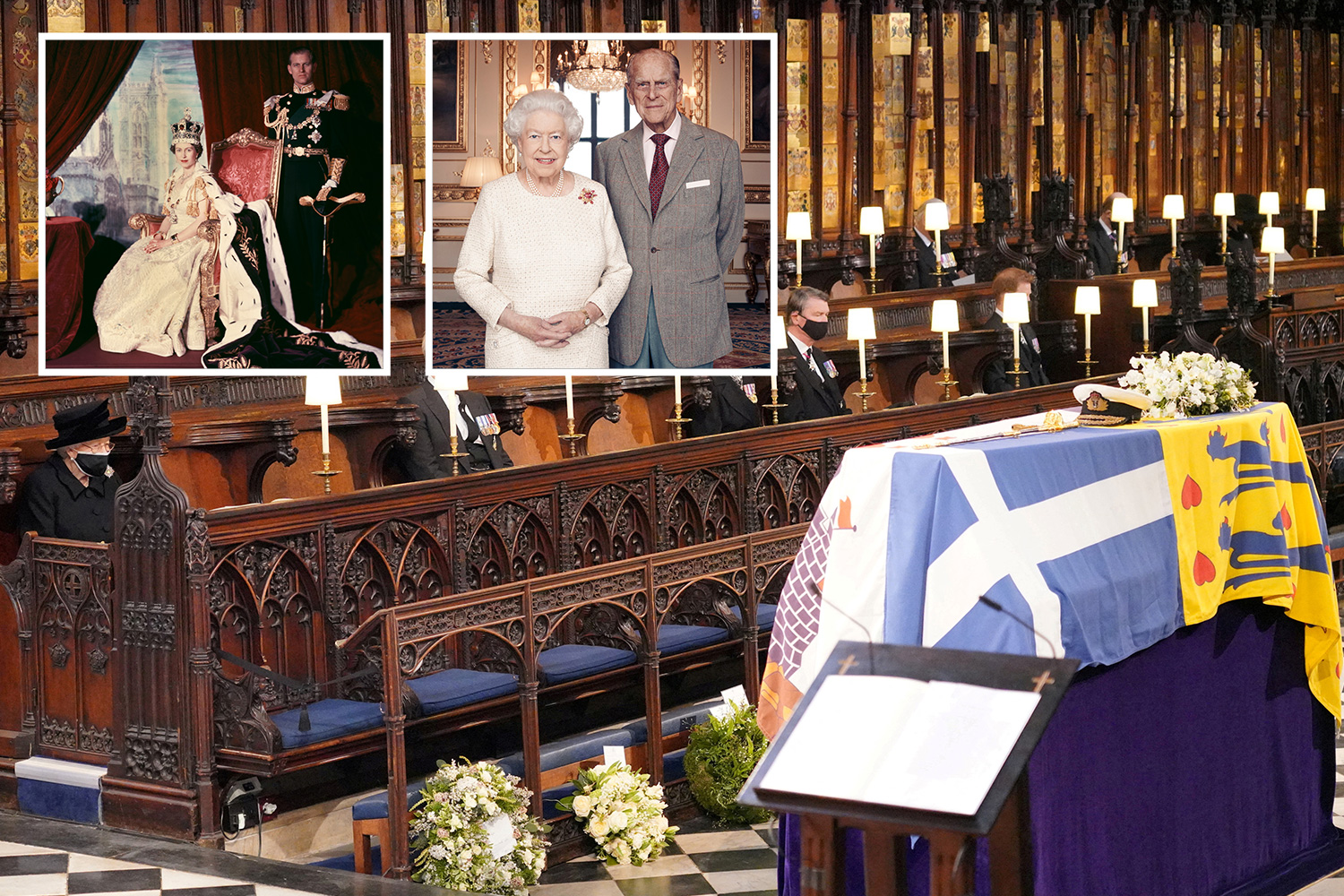 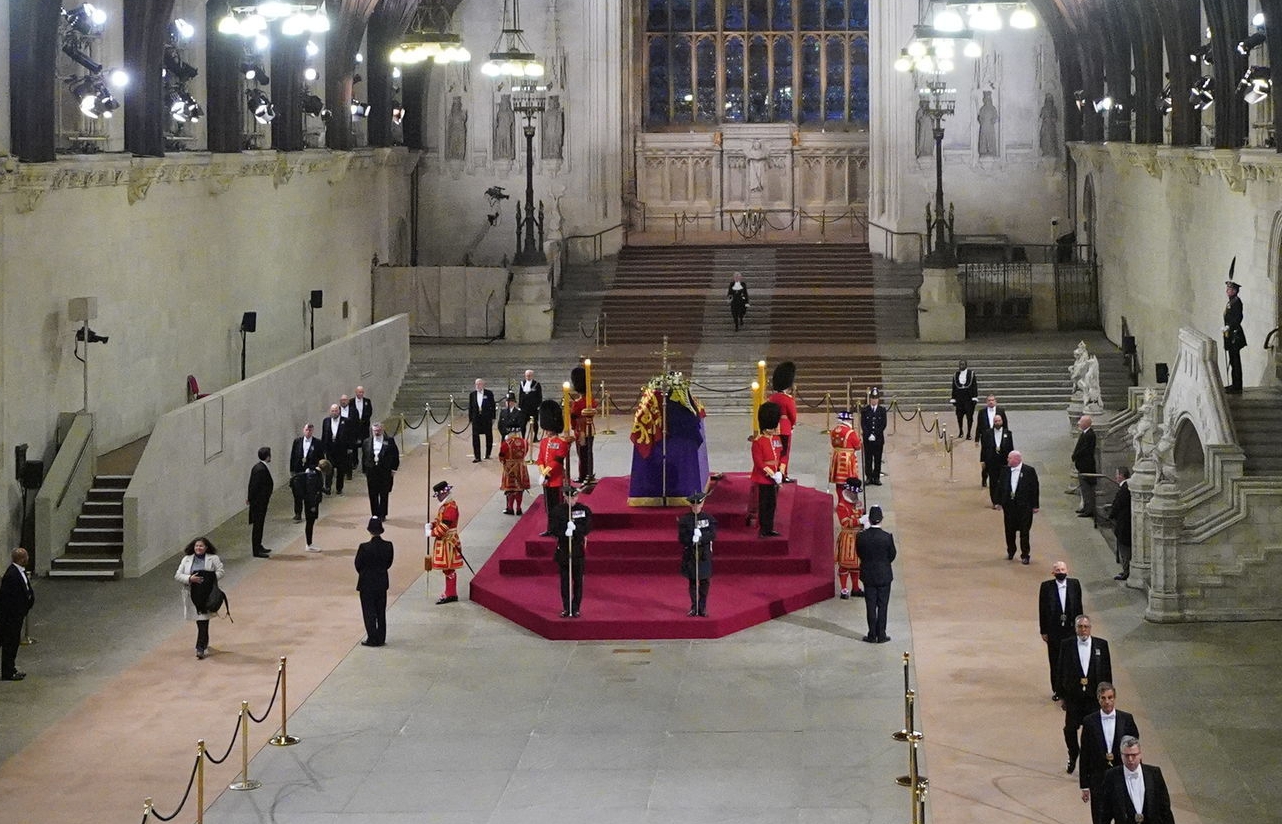 Mum-of-three Kate was seen placing a reassuring hand her eldest children's shoulders as they entered the memorial.

George was pictured singing The Day Thou Gavest, Lord, Is Ended as he stood between his parents.

Charlotte could be seen looking around from under the brim of her hat while the mourners sang The Lord's My Shepherd.

During the Archbishop of Canterbury's sermon, George read the order of service while sister Charlotte was seen whispering to her mother.

At one point, the youngsters could be seen standing next to their aunt Meghan Markle.

The family then took their seats alongside leaders from around the world to say goodbye to Britain's longest-reigning monarch.

The King this morning led the Royal Family as they walked in a procession behind the Queen's coffin.

Charles, 73, appeared to wipe away a tear as he followed his late mother's coffin – draped in the Royal Standard flag, and topped with her Crown, Orb and Sceptre -into Westminster Abbey.

William had been seen in a Range Rover with a police escort heading towards the St James' Palace before the procession shortly after 10.15am.

He had a reflective expression on his face as he travelled with Princess Charlotte beside him in the car.

The royals then appeared to switch cars as William moved to travel alongside his dad, King Charles.

Charlotte and George sat side by side in another car, with Kate and Camilla sitting behind.

The royal youngsters were among the 2,000 people gathered at Westminster Abbey before a committal service at Windsor Castle.

It is their chance to say goodbye to the woman they called “Gan-Gan”.

George and Charlotte previously walked hand-in-hand with their parents at the thanksgiving service for Prince Philip in March.

Crowds of heartbroken mourners flocked to London, Windsor and royal sites throughout the UK on the national bank holiday.

The entire funeral ceremony was screened on television to an estimated worldwide audience of four billion people.

The 2,000 mourners inside included heads of state, foreign royals and almost 200 key workers and volunteers.

Hundreds of thousands of mourners lined the streets ahead of today's emotional service – the climax of what has been described as the biggest security operation the UK has ever seen.

Some dedicated royal fans have even been camping out since Friday to bag the best spots – and by 9am, all public viewing areas along the procession route were full.

Kate has revealed her four-year-old son Louis is struggling to understand the Queen's death.

The Princess of Wales said her eldest son George is "sort of realising how important his great-grandmother was and what is going on".

But she said Louis is struggling – and has been asking a lot of questions ahead of his "Gan-Gan's" funeral today.

Kate made the revelations while speaking to Australia's Governor-General at a reception held for Commonwealth dignitaries last night.

Recalling the chat, David Hurley said:  "The younger one is now asking questions like, 'do you think we can still play these games when we go to Balmoral' and things like that, because she's not going to be there?'"

It comes after up to 400,000 people queued for hours to see the Queen lying in state at Westminster Hall, which ended at 6.30am.

The Queen will today be re­united with her beloved Philip, the monarch’s “rock and stay” for more than seven decades.

At a private service inside Windsor Castle, Her Majesty will be buried with the Duke of Edinburgh, who died 18 months ago, aged 99.

Last night, a never-before-seen photograph of the smiling Queen was released by her family on the eve of her funeral.

She is seen wearing her Aquamarine Clip Brooches, a gift on her 18th birthday by her father King George VI.

It was taken in May for a collection to mark her Platinum Jubilee celebrations for serving 70 years on the throne. 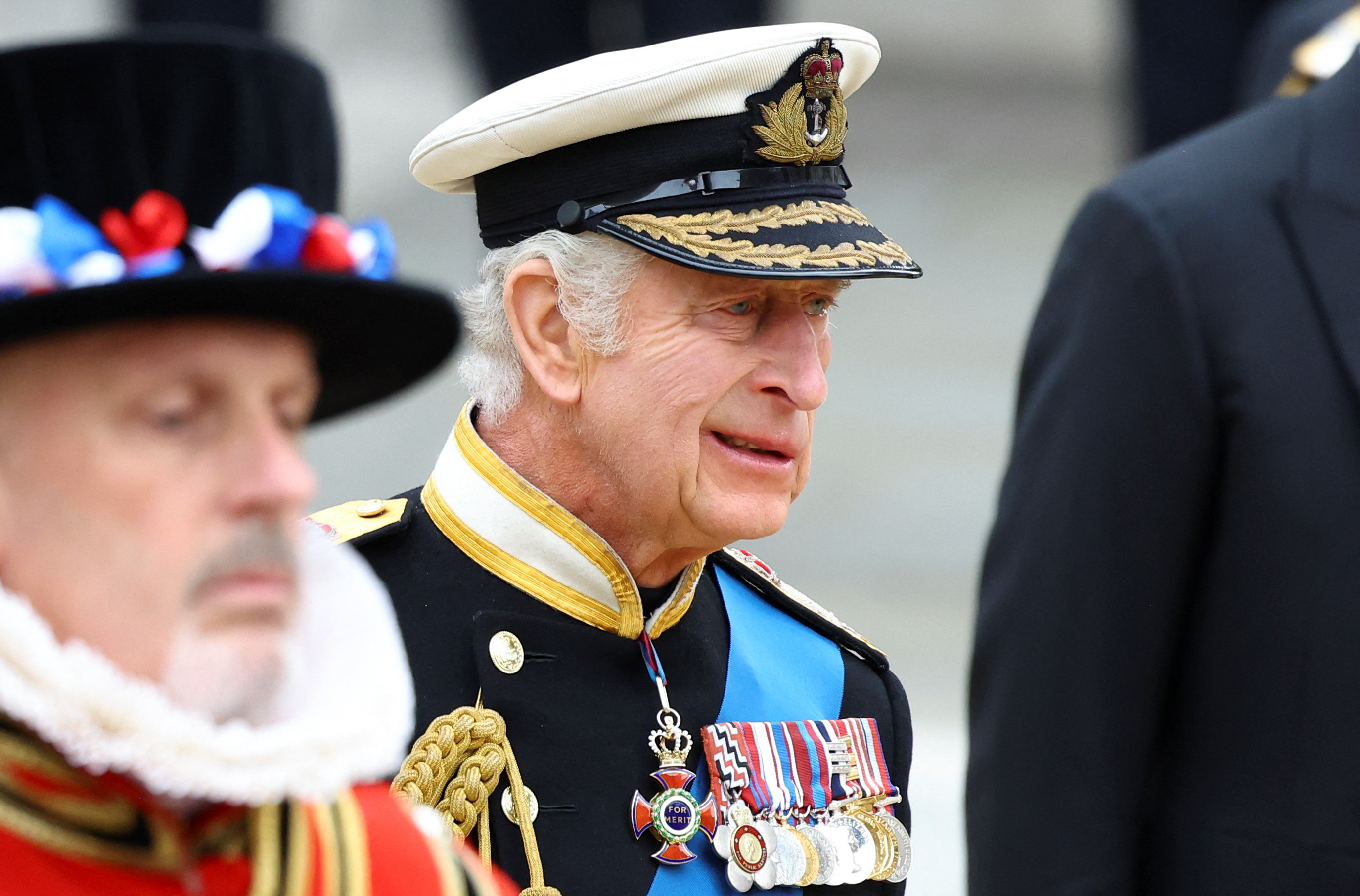 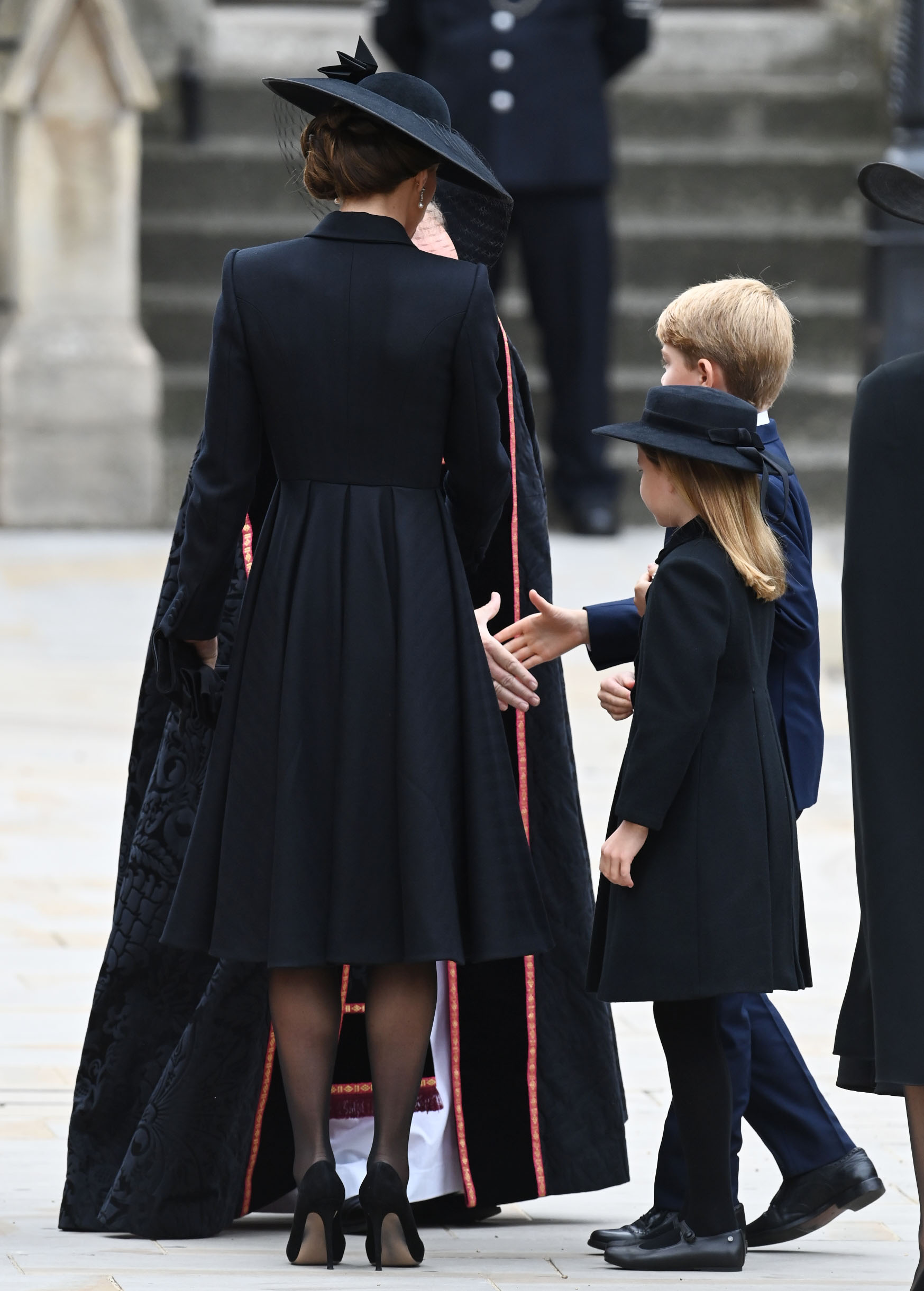 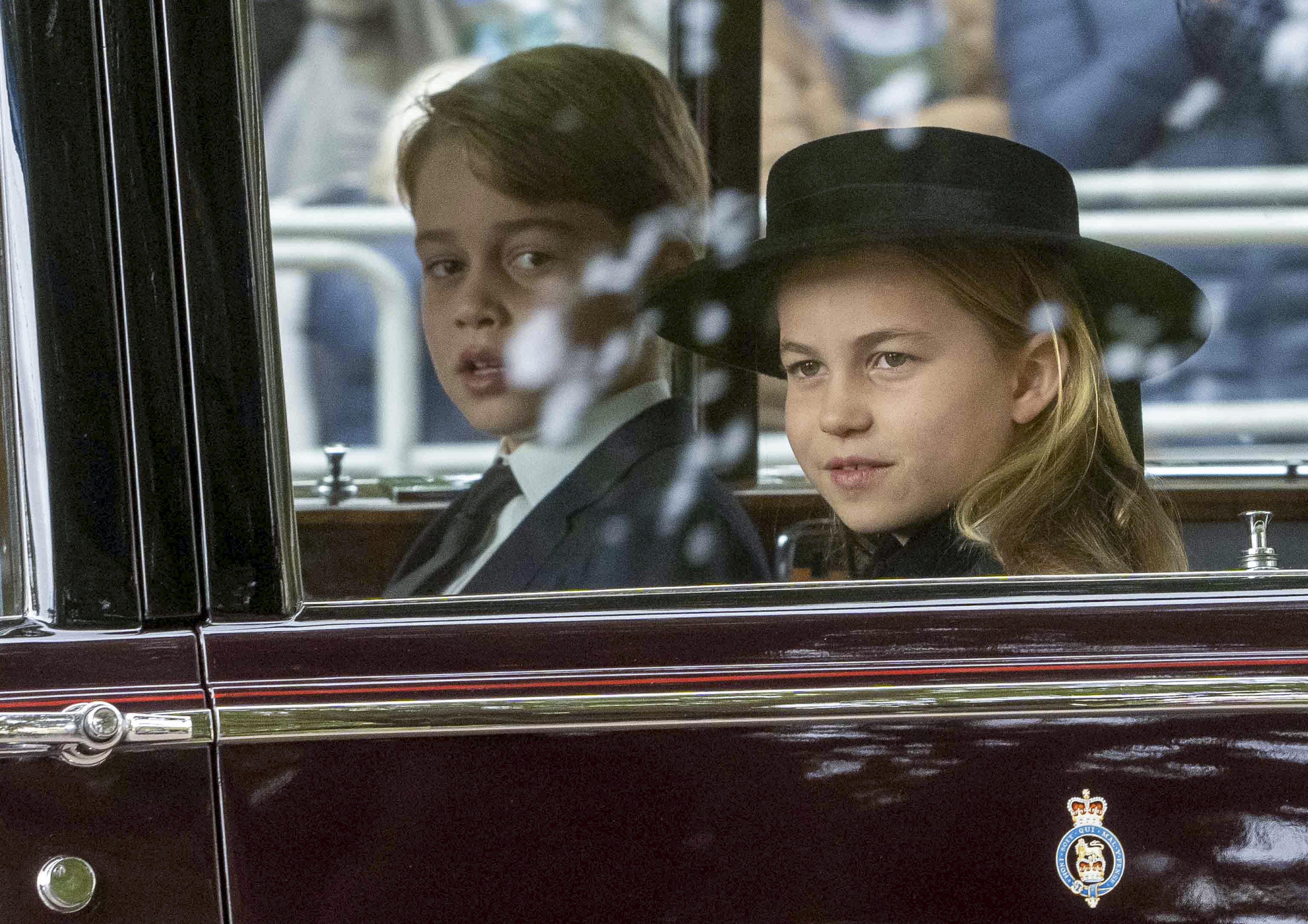 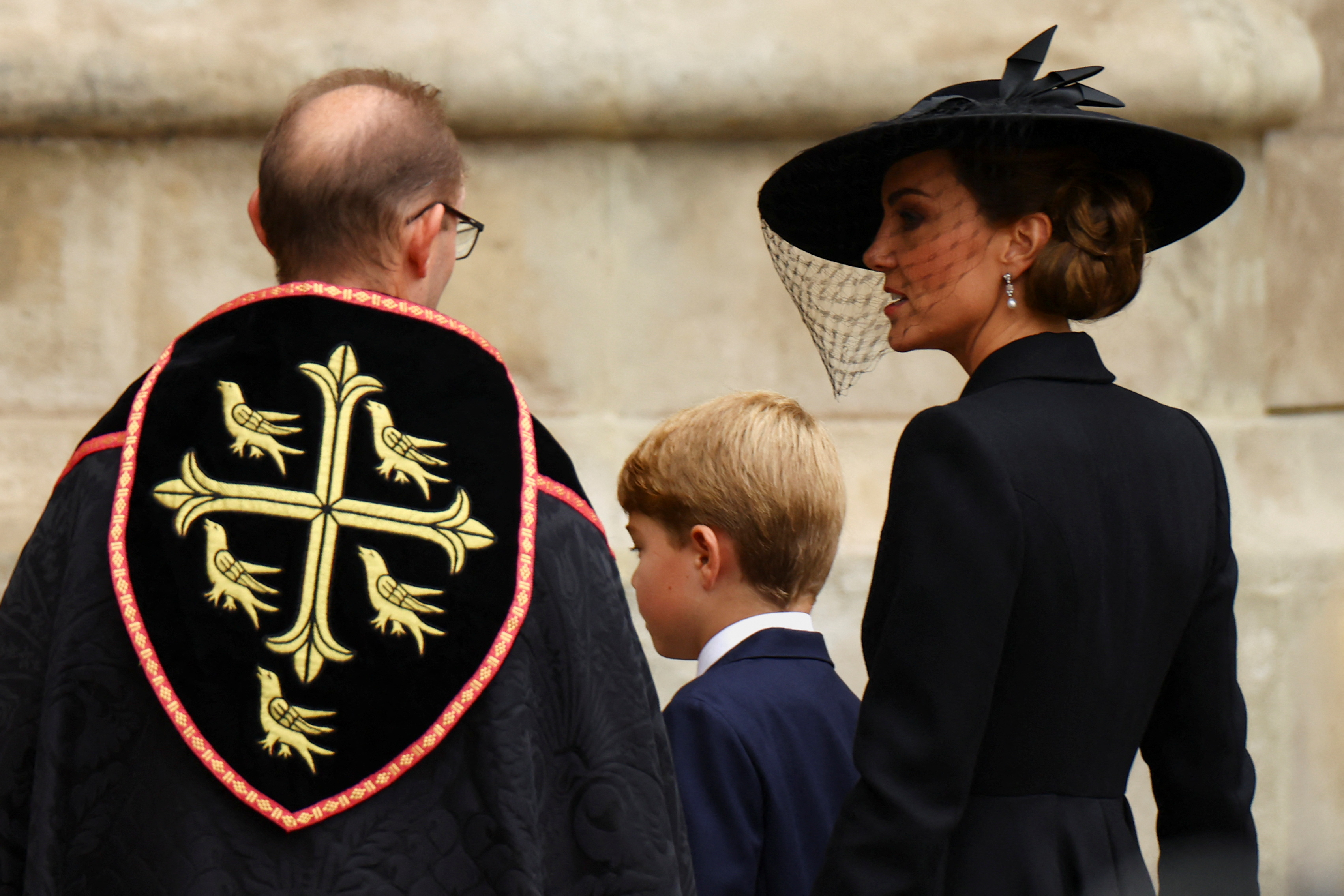 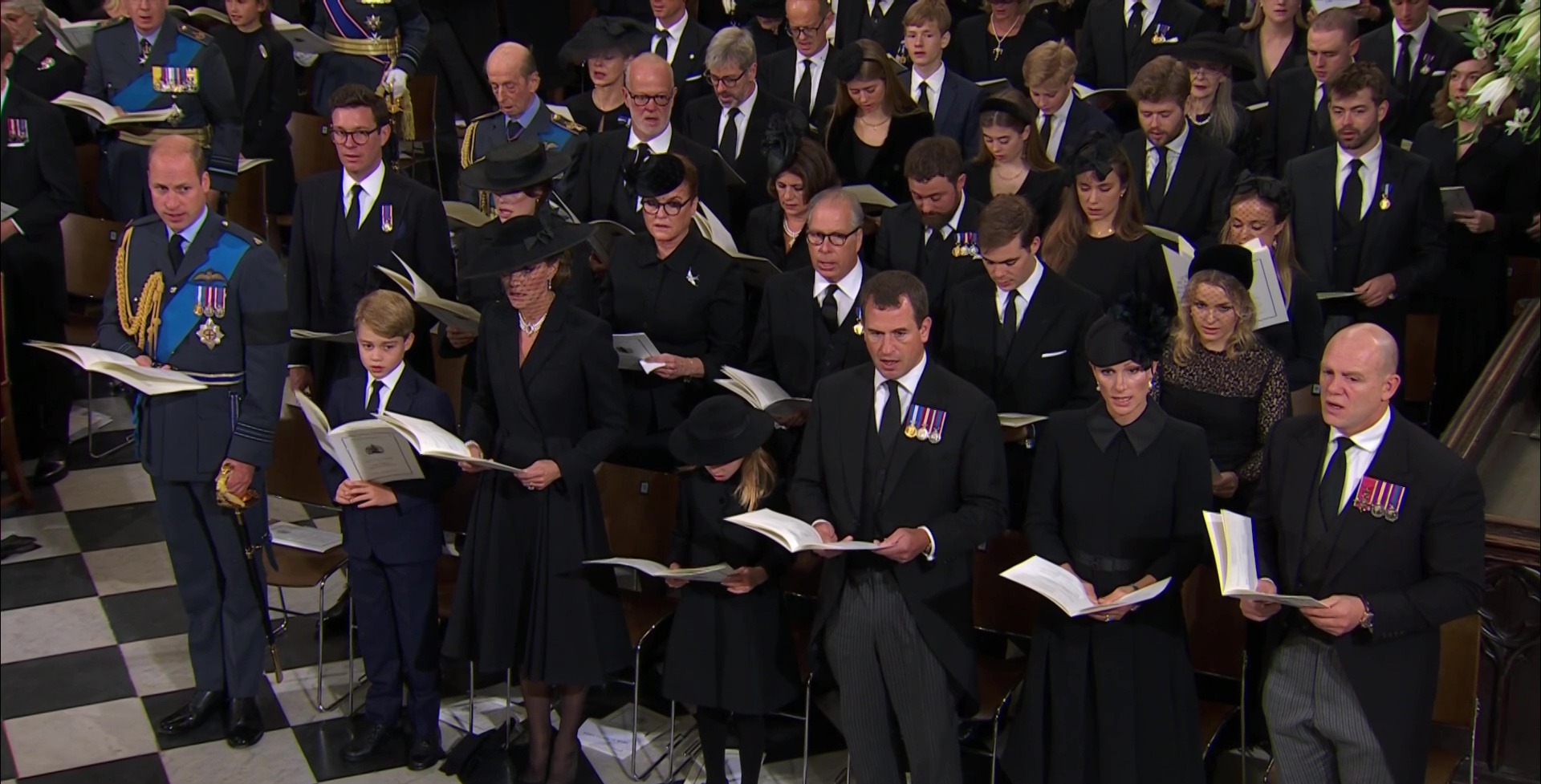 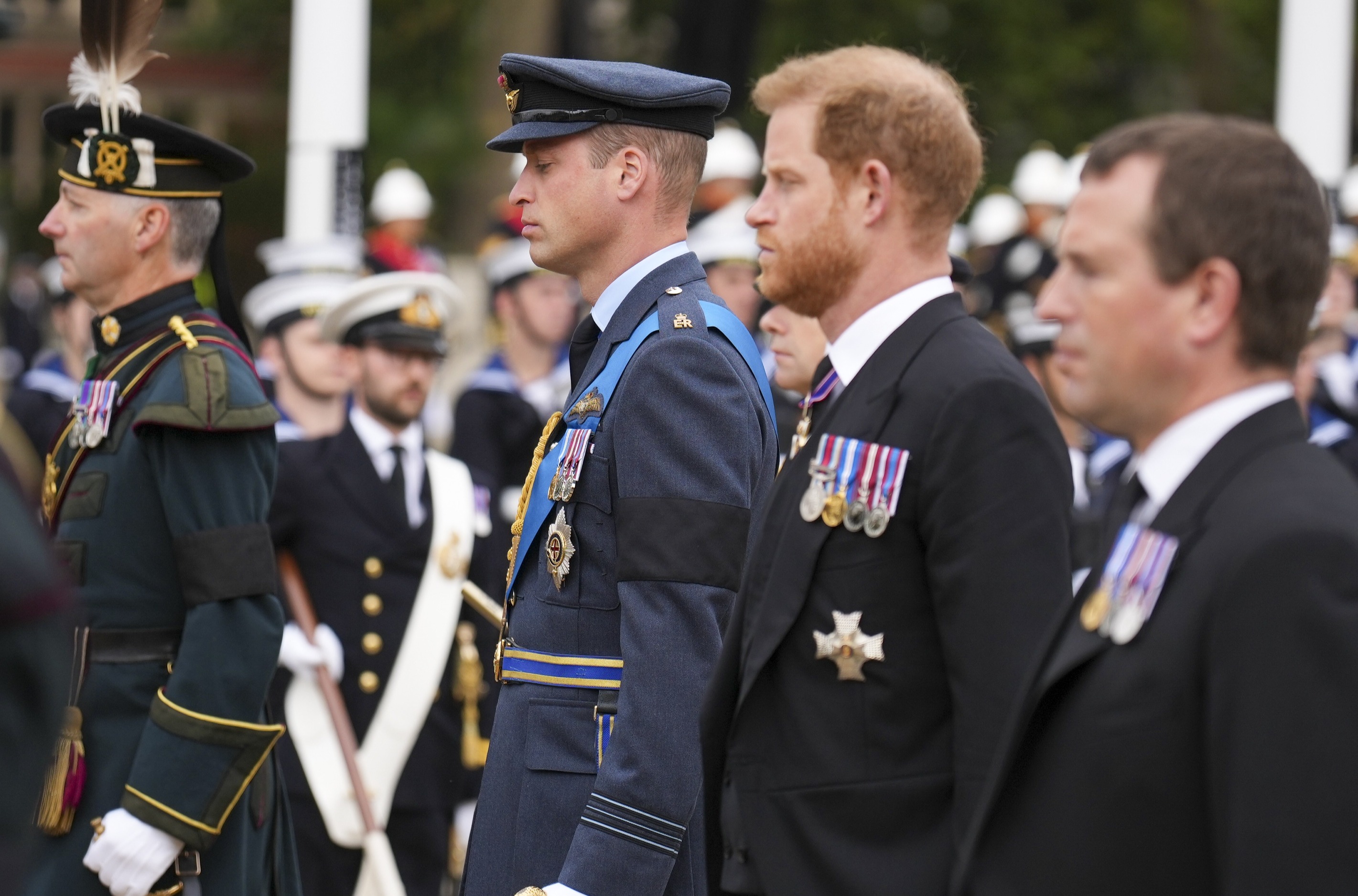 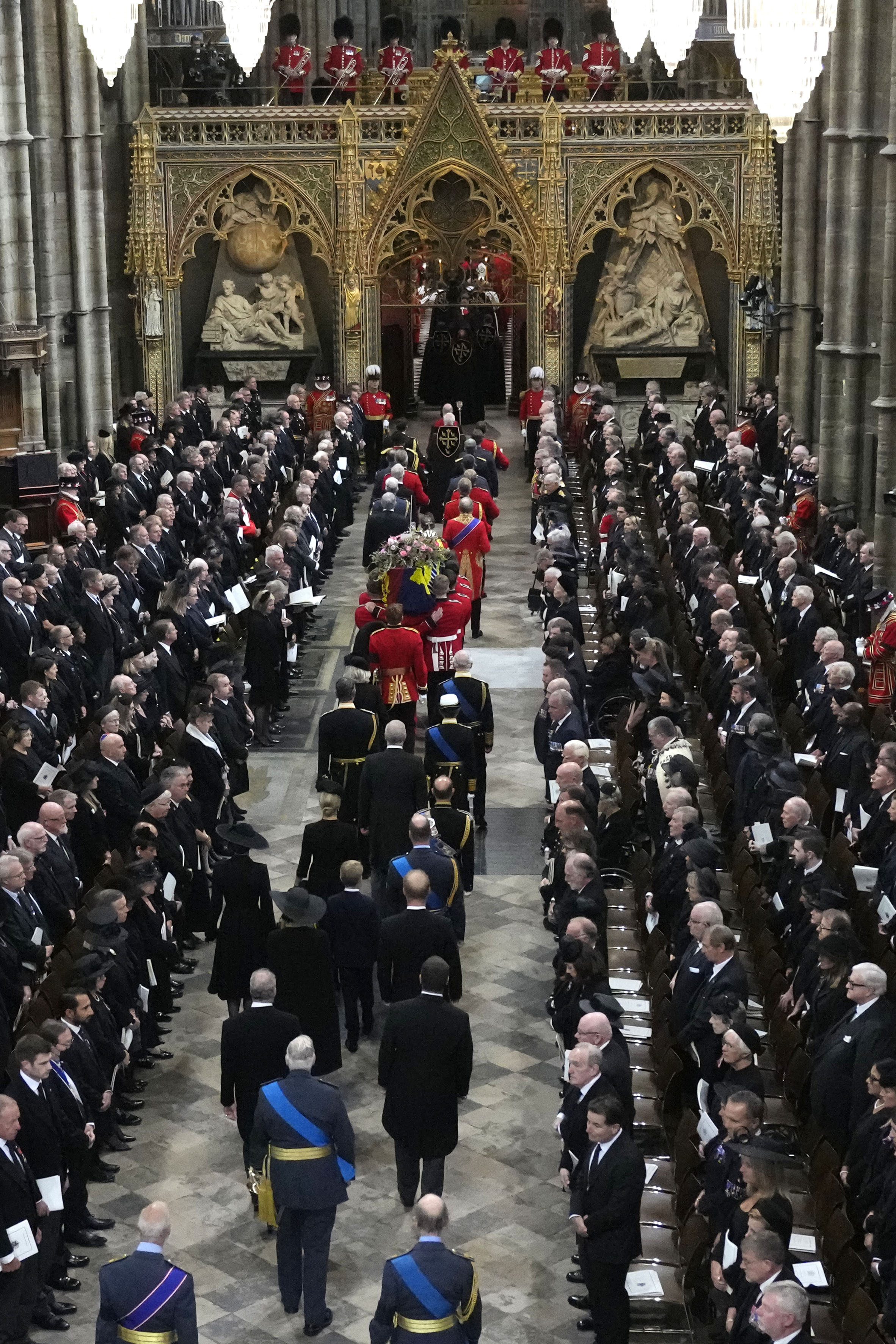 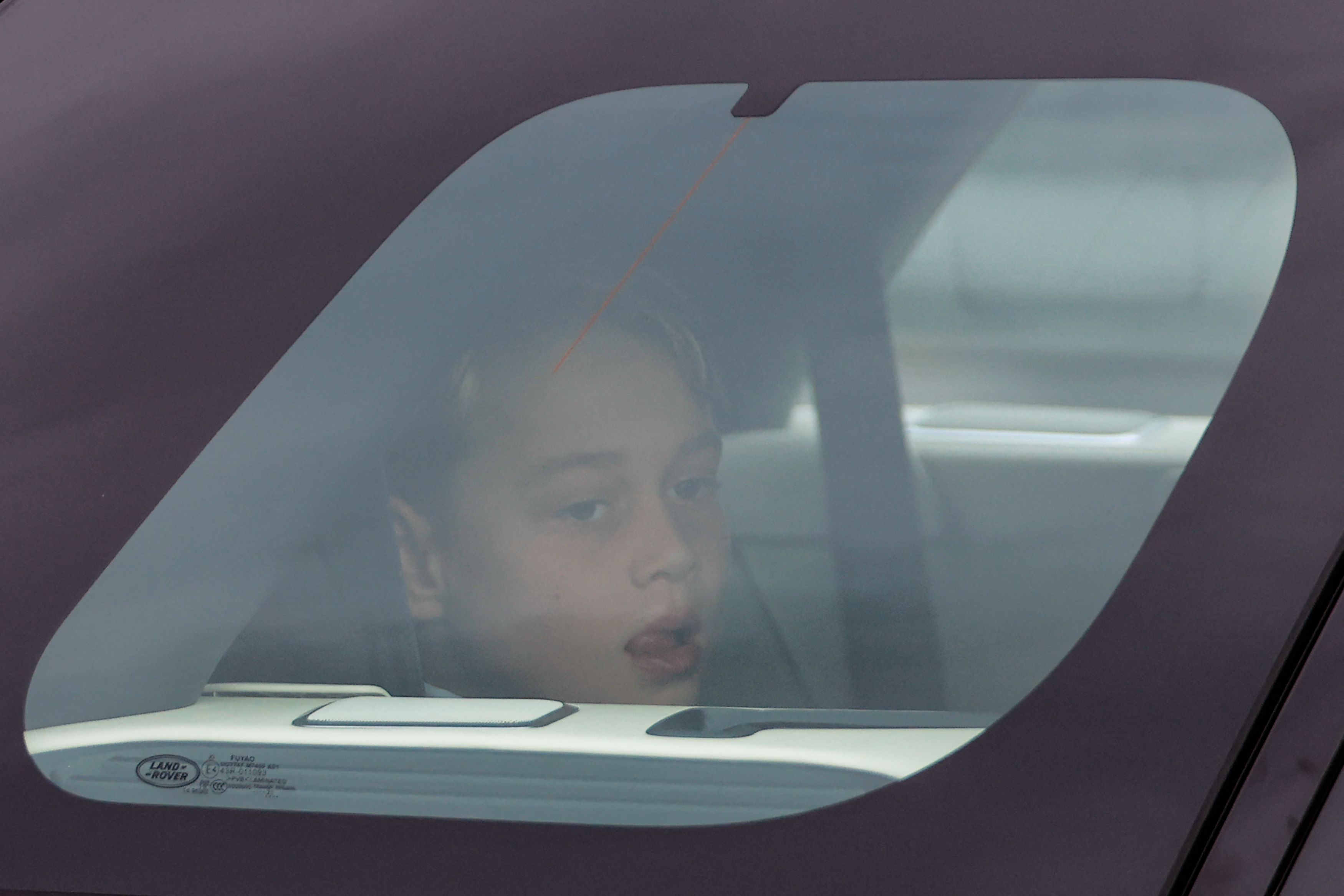 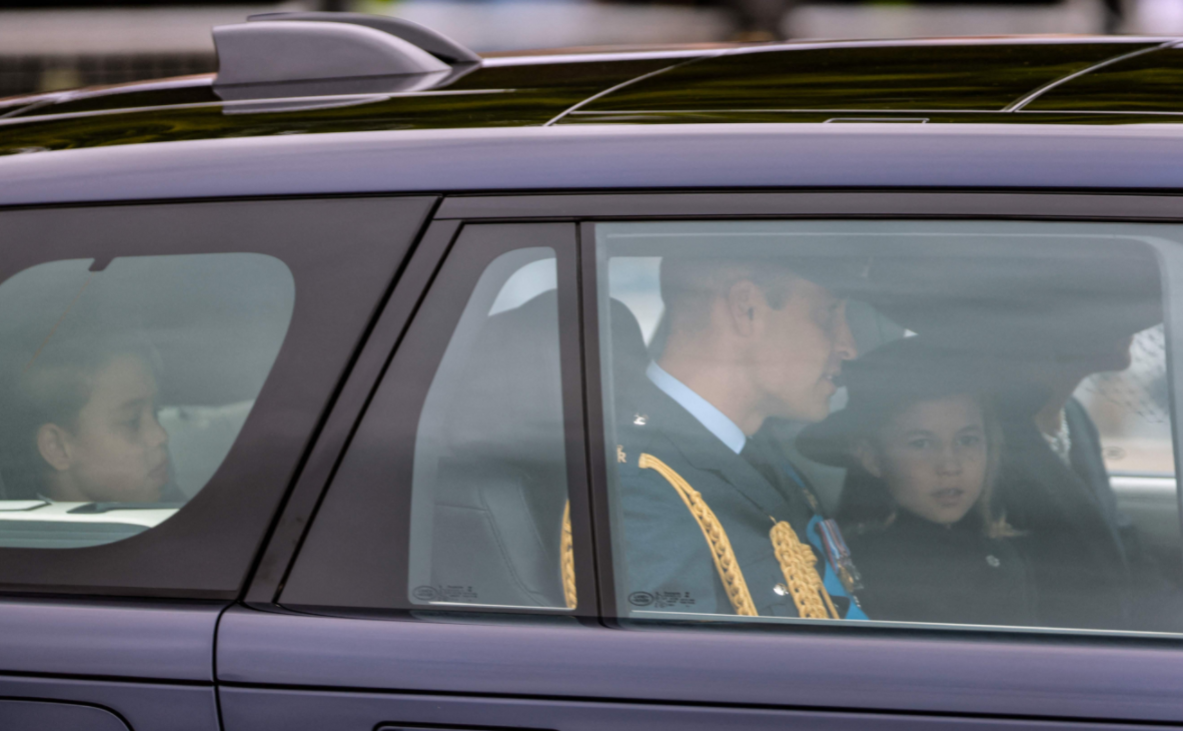 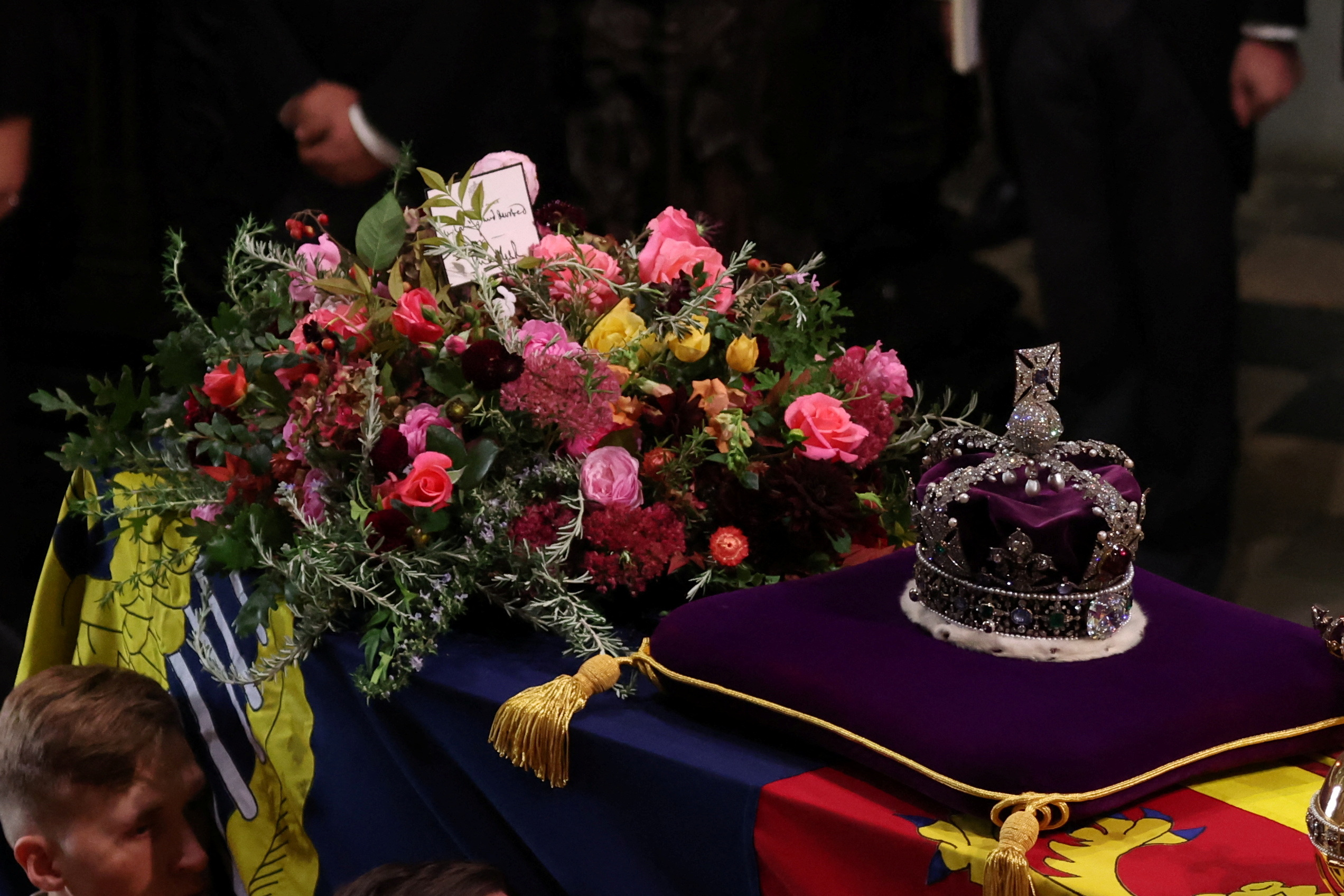 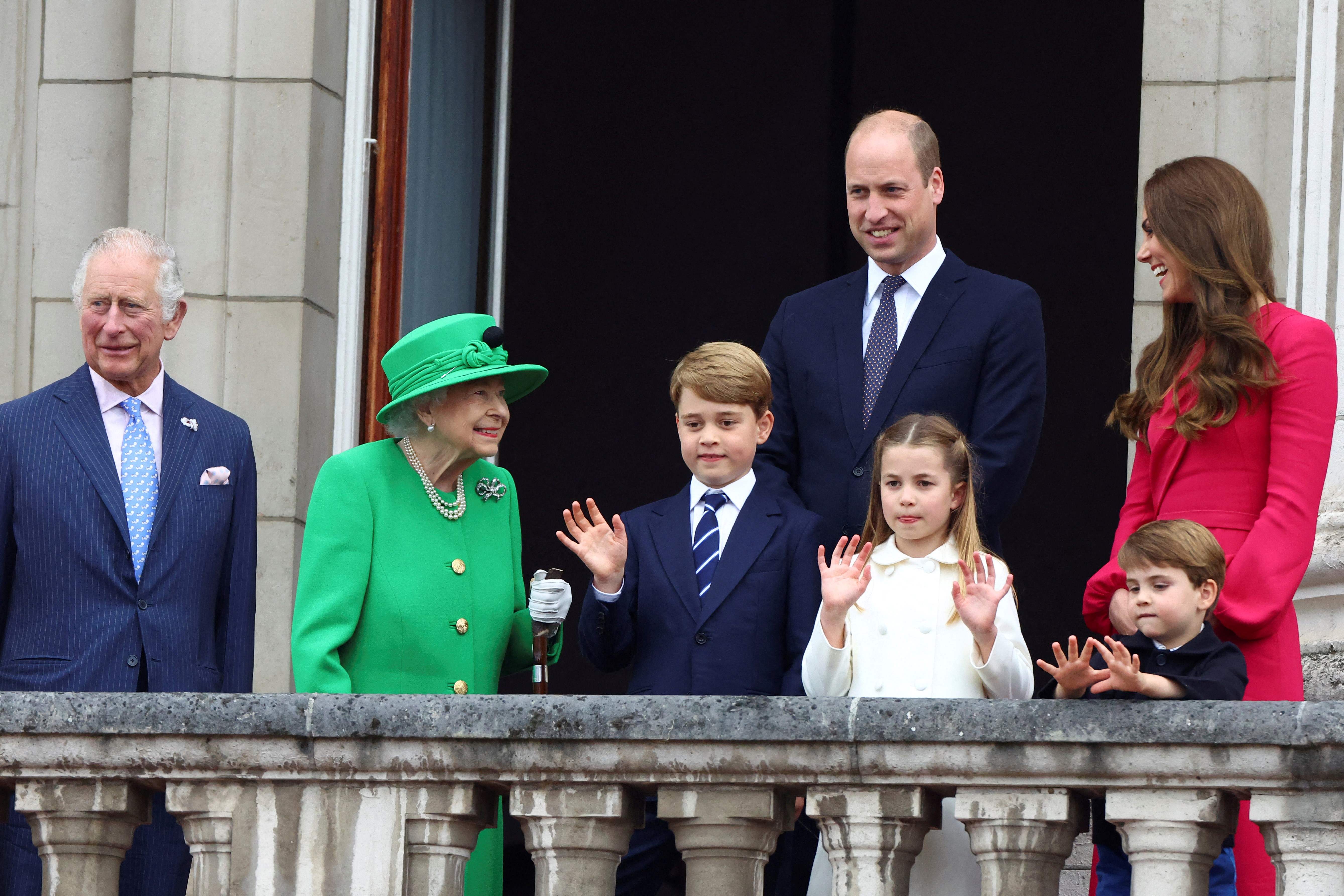 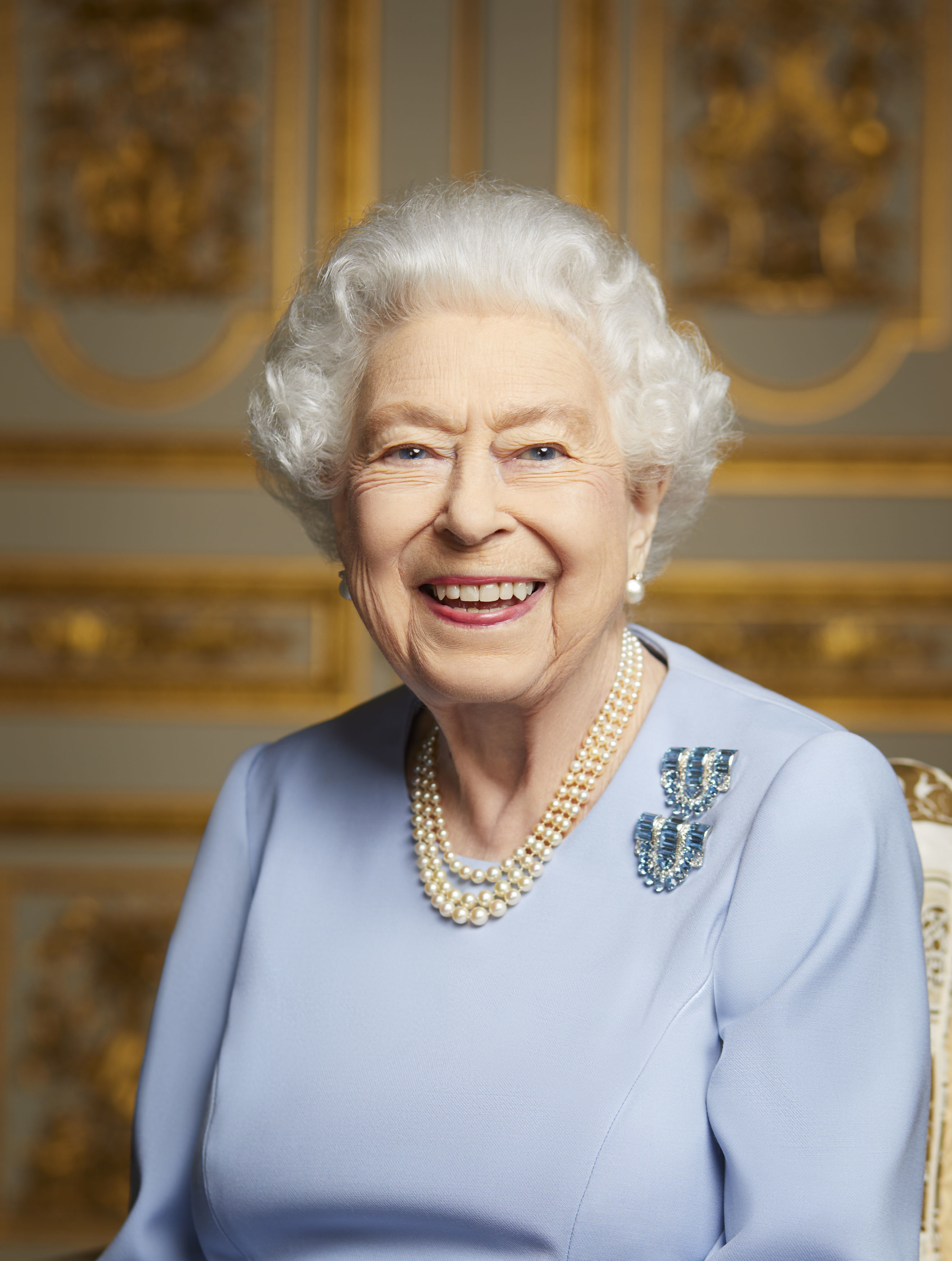