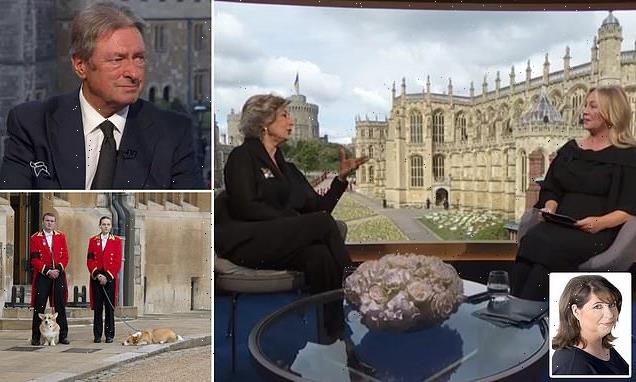 The self-mulching Alan Titchmarsh had the sprinklers on full blast as he told Kirsty Young all about ‘the first words my sovereign said to me’: JAN MOIR’s view from the sofa as she watches the world say goodbye to the Queen

Commentators hushed, anchors were sunk, reporters put away their microphones.

For more than an hour on all major television stations yesterday morning, something incredible happened. Something you rarely hear in the rolling cacophony of modern broadcasting.

It was, whisper it, the glorious absence of voices. The sound of silence. The incredible spectacle of Queen Elizabeth’s funeral was allowed to speak for itself.

Across all channels, coverage of the key procession from Westminster Hall to Westminster Abbey — and then the service itself — was some of the most amazing television most of us will ever see. 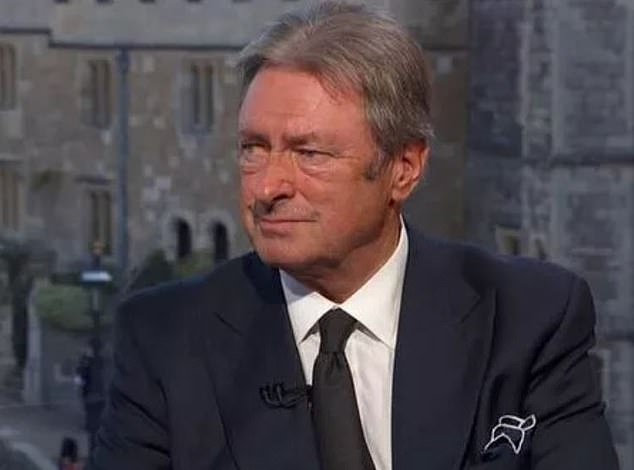 Jan Moir: ‘Here, the mood was noticeably less sombre, although self-mulching Alan Titchmarsh had the sprinklers on full blast as he talked about ‘the first words my sovereign said to me’ and her love of ‘humble flowers”

It took place in a small corner of a great city, but the images and the sensory experience captured by the cameras were unforgettable. The magnificent soldiers, the tolling bells, the bagpipes adding their own indelible layer of Celtic melancholy.

In what some might see as an unfortunate choice of metaphor, ITV’s Mary Nightingale said it made her ‘skeleton shake’, but we all understood what she meant.

Everything seemed to be happening in slow motion, yet many viewers must have hoped it would go on for ever. The eyeballs boiled at such lush, drenching pageantry, as the symbolism of monarchy and nation vied for attention with the simple grief of a family saying goodbye to a much-loved matriarch.

However, if silence is golden it must also be broken. Just as the hearse slid into place, the microphones clicked back on. ‘The ancient structure of Westminster Abbey, directly in front of the car,’ said Huw Edwards (BBC1), in case anyone was wondering about that big, grey building lurking centre stage. 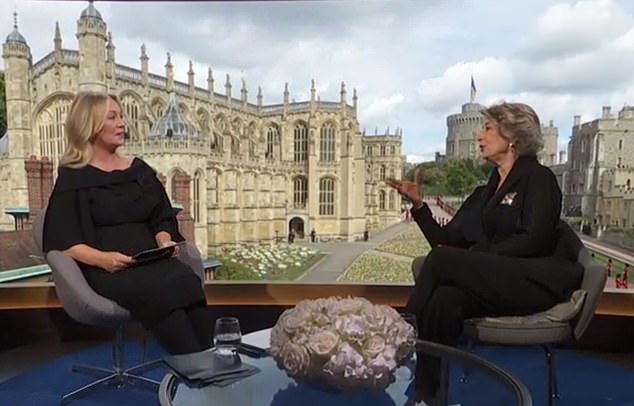 Jan Moir: ‘The BBC filled the gap between the Westminster Abbey and St George’s Chapel services with the always superb Kirsty Young in the Windsor studio, interviewing assorted guests’

Fergus Walsh, emoter-in-chief for the BBC, was prepared as always to go one better. ‘The Queen is borne into the Abbey, part of the recurring seasons of death and renewal,’ he intoned.

As some scrabbled for profundity like sightless hens scratching for corn, others were more tactful.

For, speaking of renewal, nobody even mentioned the Duchess of York suddenly appearing at the end of a crocodile of royal grandchildren, but I felt like cheering. Momentarily forgiven, Fergie slipping into the Abbey in black, taking her place in a pew to say goodbye in person — isn’t that just what the Queen would have wanted? I like to think so.

The BBC filled the gap between the Westminster Abbey and St George’s Chapel services with the always superb Kirsty Young in the Windsor studio, interviewing assorted guests. Here, the mood was noticeably less sombre, although self-mulching Alan Titchmarsh had the sprinklers on full blast as he talked about ‘the first words my sovereign said to me’ and her love of ‘humble flowers’.

He also said: ‘I have been so moved by the fact that we have all come together as she said we would and we must. I feel continuity.

‘The Queen has gone and we are still here as she would have wanted us to be.’ There seemed to be a tinge of Titchmarshian regret that we weren’t back in the time of the pharaohs, where the opportunity for loyal gardeners to be entombed with their rulers was commonplace.

Next up was Dame Maureen Lipman, who had a premonition that the Queen was going to die (‘I texted a friend’) but had to carry on working when her hunch sadly came true. 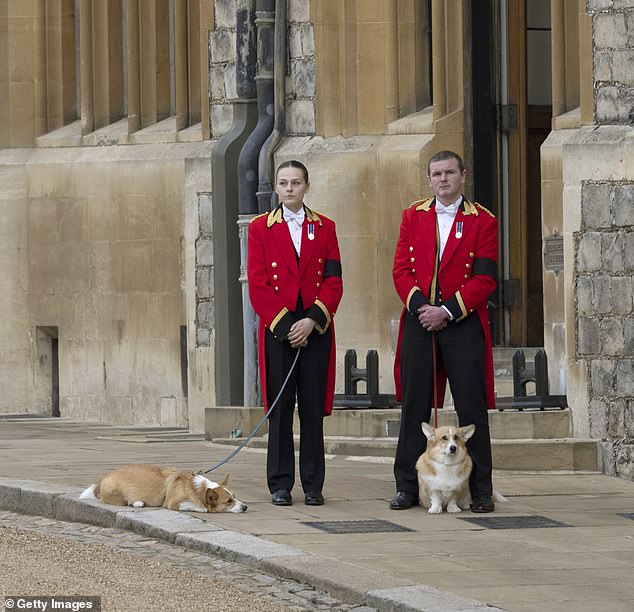 Jan Moir: ‘In the afternoon, the appearance of the Queen’s pony, Emma, along with her corgis Sandy and Muick, made many viewers gulp with emotion’

‘My reaction was visceral, I sobbed, but the show had to go on,’ she said. We learned that she had met Her Majesty six times, while Kirsty had met her only once.

‘She is in her own skin, she is absolutely herself,’ said Dame Maureen.

‘She had the best skin I have ever seen, she was lit from within,’ said Kirsty.

Over on ITV, Tom Bradby was going much, much more than skin deep by already fretting about mental health issues.

‘The grief on the Queen’s children and grandchildren’s faces; Prince George coming face-to-face with his destiny,’ he wailed. Luckily, royal psychotherapist (and Prince George’s godmother) Julia Samuel was there to reassure him.

‘Blocking the pain of loss can do us harm over time,’ she said, adding that the ‘beauty of the service held the great pain of the loss’. 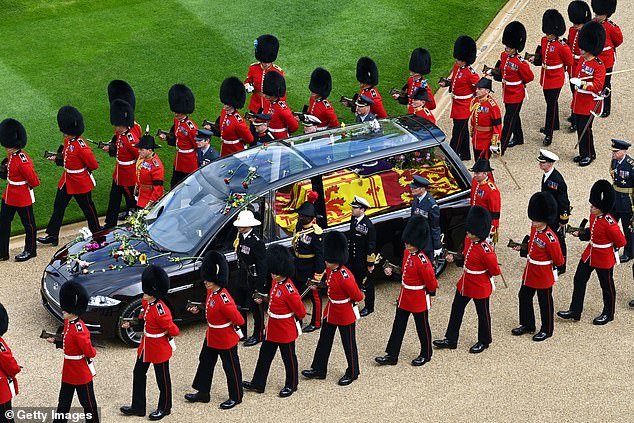 Jan Moir: ‘Earlier, all broadcasters had been filling airtime with both the profound and the piffle as they set the scene for this most momentous of days’

Also that ‘the grieving process is coming to terms with that reality’. Wasn’t it too soon for all this hand-wringing talk of healing and moving on? The Queen and the royal mourners were barely moving on from London at that point.

Earlier, all broadcasters had been filling airtime with both the profound and the piffle as they set the scene for this most momentous of days. It was going to be ‘the biggest event that has happened in London and the UK for decades and decades’ said Huw Edwards.

It was also the day that everyone had been ‘working on for years and years’, said Anna Botting for Sky.

Before the funeral began, the BBC was wondering what the Queen did when she was not dealing with affairs of state. They meant well, but it all sounded very reductive. ‘She was a countrywoman at heart,’ we were told. She was a woman who ‘loved her racing horses’. She was a ‘very good gundog handler’ and also ‘loved doing jigsaws’ — although presumably not at the same time. 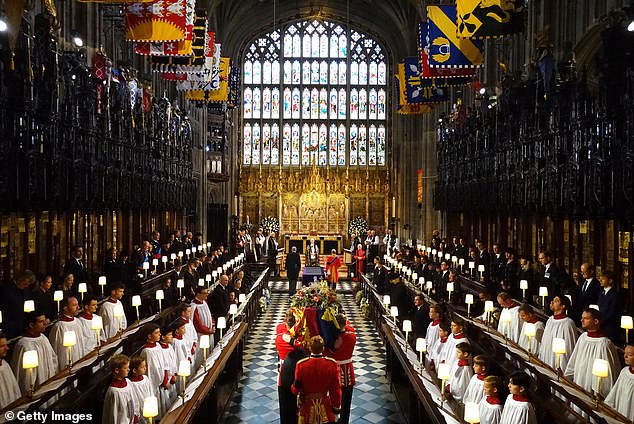 Jan Moir: ‘Overall, it was the little things relayed by the footage that made the day unforgettable’

‘She loved playing Scrabble,’ boomed Gyles Brandreth. Anything else? Yes. ‘For the late Queen, horses were almost the most important thing in her life,’ said Alastair Bruce for Sky — and never has the word ‘almost’ done such important duty in a sentence.

‘Her two great passions were horses and dogs,’ said David Dimbleby, who rather over-egged his commentary from Windsor for the BBC. Perhaps he didn’t get the silent treatment memo.

Meanwhile, in the crowds on The Mall, a former bagpiper for the Queen told a female BBC reporter how Her Majesty once gave him a bottle of arnica for his wife’s bruises after she had been involved in a car accident.

‘Such compassion!’ said the reporter and I barked with laughter, before realising she wasn’t joking.

Overall, it was the little things relayed by the footage that made the day unforgettable.

In the morning, at Wellington Barracks, a Grenadier Guard told Alex Rossi from Sky that it was ‘the proudest day of my life’ taking part in the ceremony. In the afternoon, the appearance of the Queen’s pony, Emma, along with her corgis Sandy and Muick, made many viewers gulp with emotion. 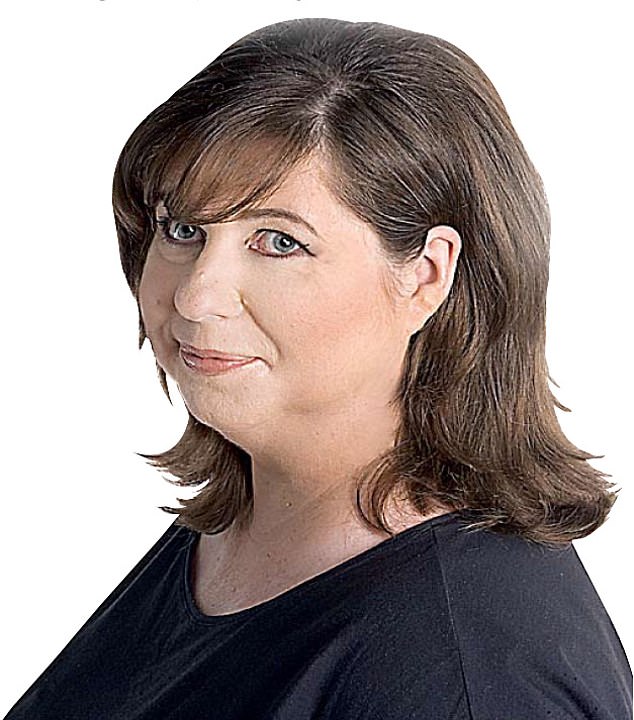 Jan Moir: ‘Even after the thunderous majesty of her funeral, it still seems strange to think that we will never see her again, cheerful under a colourful hat, waving from the balcony, addressing the nation at Christmas’

In the end, it was a sad but proud day for everyone, this longest of long goodbyes. It was a farewell to a monarch born between the world wars, the last major public figure to be a symbol of the post-war era. Queen Elizabeth wore a uniform, her husband served with the Royal Navy, her generation knew both war and peace, the worth of a shilling, the fragility of life.

Even after the thunderous majesty of her funeral, it still seems strange to think that we will never see her again, cheerful under a colourful hat, waving from the balcony, addressing the nation at Christmas.

No wonder that all last week, thousands and thousands of people queued to see her lying in state while millions more watched them do so on television. Perhaps with all this came an understanding that life is one long queue that ends in a coffin, for all of us, not just the Queen.

Then, at the very end, as her mortal remains disappeared into the Windsor vaults while a grief-stricken King Charles looked on, the Queen finally slipped from the public gaze for ever.