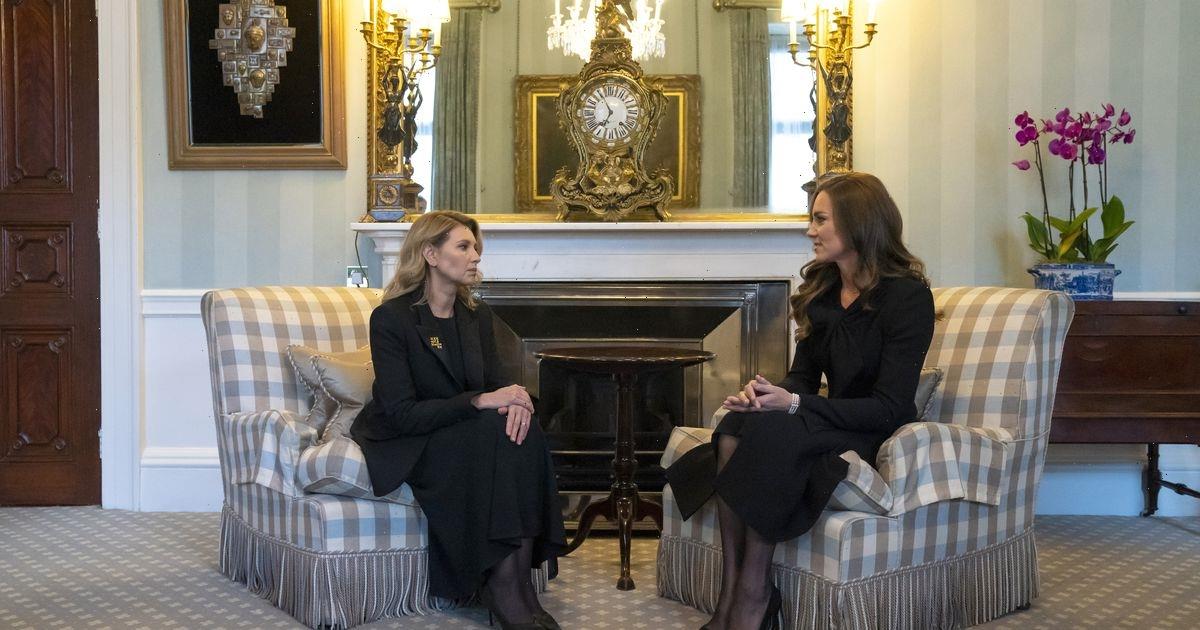 His Majesty, 73, and Camilla, 75, were also joined at the event byKate MiddletonandPrince Williamin what the King’s spokesman described as an “official state event”.

For the event, the Princess of Wales, 40, wore a black dress and matching heels while also sporting a pearl bracelet belonging to the late monarch.

She was pictured speaking to the First Lady of Ukraine, Olena Zelenska, to welcome her to Buckingham Palace while her husband stays behind to deal with the country's war with Russia.

They were joined by New Zealand Prime Minister Jacinda Ardern, who walked into the Palace followed by Canadian Prime Minister Justin Trudeau, who smiled briefly at journalists.

Brazilian President Jair Bolsonaro also joined dozens of other guests at the reception.

The arriving dignitaries have already been viewing the Queen's coffin in the heart of Parliament after being given a VIP timeslot.

It has been a busy day for the new King, after it was revealed he had travelled over 1,900 miles in the last week meeting well wishers in each of the four nations.

OnSaturday he was again joined by Kate, William and Camilla to greet representatives from Commonwealth countries at Buckingham Palace.

The governors-general of Antigua and Barbuda, Australia, the Bahamas, Belize, Canada, Grenada, New Zealand, Papua New Guinea, Saint Lucia, Saint Vincent and the Grenadines, the Solomon Islands and Tuvalu were among those present.

For all of the latest updates, sign up for OK!'s Royal newsletter

Charles also met with the chiefs of staff at Buckingham Palace on Saturday and personally visited Police headquarters in London to thank the emergency services for their work in planning the funeral, which many news sources believe may be the largest international event of it’s kind ever held in the UK.

The new King and his son, Prince William also surprised crowds that were queuing to see the late Queen on Saturday, as they stopped to personally greet and thank as many members of the public as time would allow, as the queue stretched along the side of the Thames.

Many took photographs and pressed against the metal barriers, eager to exchange a word with the King and the heir to the throne.

Currently people are queuing to visit the Queen Lying-in-State which reached its final day on Sunday.

The late monarch’s coffin will remain in Westminster Hall for the public to view until 6.30am on Monday, ahead of the state funeral in Westminster Abbey, with today likely to be the last chance to join the queue.

Some 800 people, including members of the Queen’s Household and Windsor estate staff, will attend the committal service afterwards at 4pm in St George’s Chapel, Windsor Castle.

After the funeral, the King and members of the royal family will walk behind the Queen’s coffin to Wellington Arch when it leaves Westminster Abbey, before it is driven to Windsor on the state hearse.