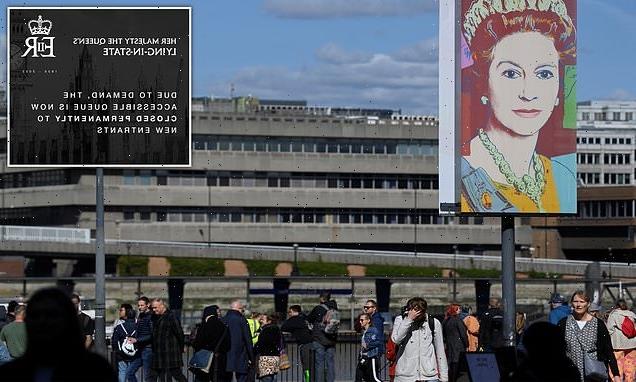 No more disabled people can see the Queen’s coffin: Government closes accessible queue for people with disabilities saying all time slots have now been filled

No more disabled people can now see the Queen lying-in-state in the Palace of Westminster after the Government permanently closed the accessible queue this afternoon.

Tens of thousands of mourners have braved 14-hour five-mile queues and plunging overnight temperatures since Wednesday evening to do ‘whatever it takes’ to pay their final respects to Britain’s longest-reigning monarch before her state funeral and burial on Monday.

The accessible queue for people with disabilities was closed this morning then resumed at midday – before The Department for Digital, Culture, Media and Sport (DCMS) announced it had reached full capacity and that the queue was now permanently closed.

The department said wristbands for all time slots had been allocated for as many people as possible to pay their respects.

A DCMS tweet advised: ‘Please do not join the queue at Tate Britain. Thank you for your understanding.’

Government guidance explained that the accessible queueing scheme would be open from 5pm on Wednesday  for 24 hours a day until the lying-in-state closes at 6.30am on Monday, the day of the funeral – and that people with disabilities would be given a slot to file past the Queen’s casket in Westminster Hall at the accessibility kiosk located at Tate Britain on Millbank.

However, the DCMS warned that the queue could close early to ‘ensure as many visitors in the queue as possible can enter the Palace before the Lying-in-State period comes to an end’, adding: ‘There will be limited capacity for the accessible queue each day, so entrance is not guaranteed’. 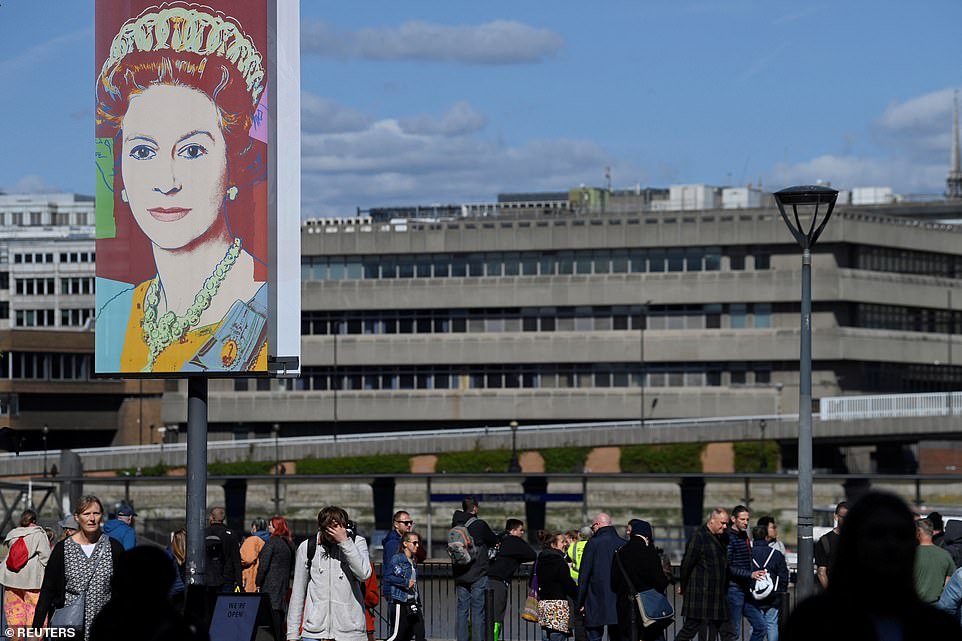 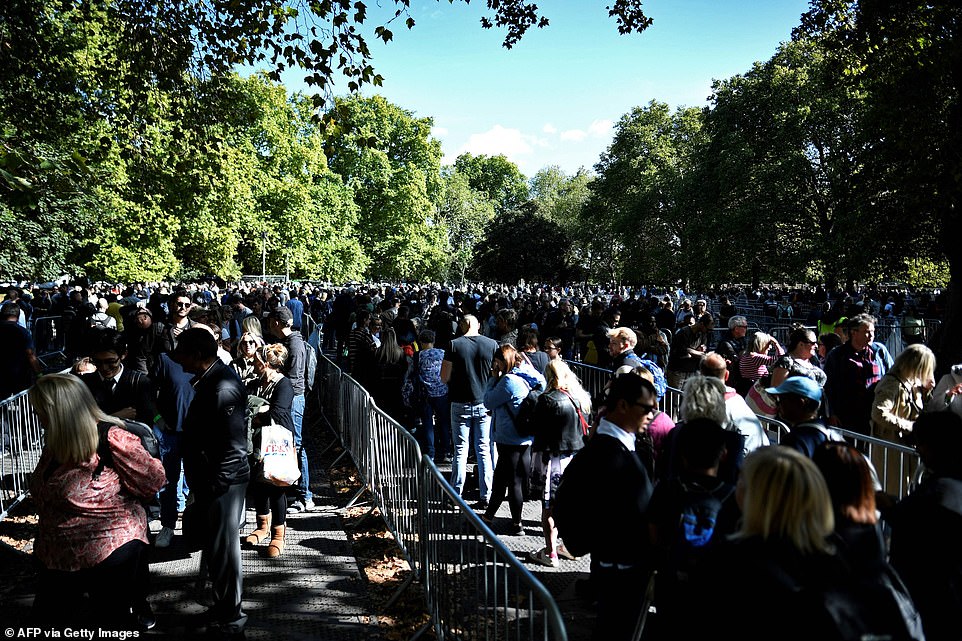 Members of the public join the queue in Southwark Park, south east London

Those waiting in the queue, which now has its own tongue-in-cheek BBC weather forecast, faced temperatures of 7C just before 7am this morning, at which time the official queue tracker advised the public not to make the journey. 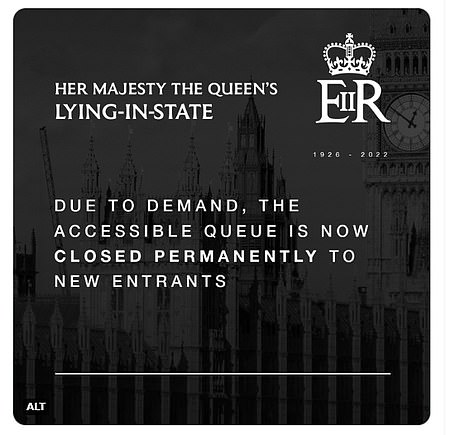 A DCMS tweet advised: ‘Please do not join the queue at Tate Britain. Thank you for your understanding’

Despite regularly checking the tracker, mourners went against advice to travel to pay their respects to the late monarch.

London Ambulance Service figures showed in the 12 hours to midnight last night, 275 people were treated, of which 39 were taken to hospital.

Claire Smart, 47, who had come to the capital from Teesside, said she had travelled to ‘pay my respects and to apologise for all the times as a little girl I rolled my eyes having to listen to the Queen’.

She went on: ‘I always wanted to curtsy in front of the Queen when she was alive, and sort of felt it was important to come and do it now.’

When asked whether she was put off by the predicted waiting times when she set off at 4.45am, Ms Smart replied: ‘I just thought I’ll regret not trying.’

Linda Partridge, 71, and Simon Hopkins, 59, travelled from the West Midlands for the lying in state because they felt ‘that need to come down’.

Ms Partridge, who left home at 3am to make the journey, said: ‘Even though they said it was closed I felt that need to come down. If we’ve got here and then they turned away, then fine. I would have just felt I needed to come and then be told I couldn’t go.’

Mr Hopkins said: ‘There was a sense of perhaps best not travel, but just to make the journey and just to check it out, and you know, if it ended in disappointment, then so be it.’ 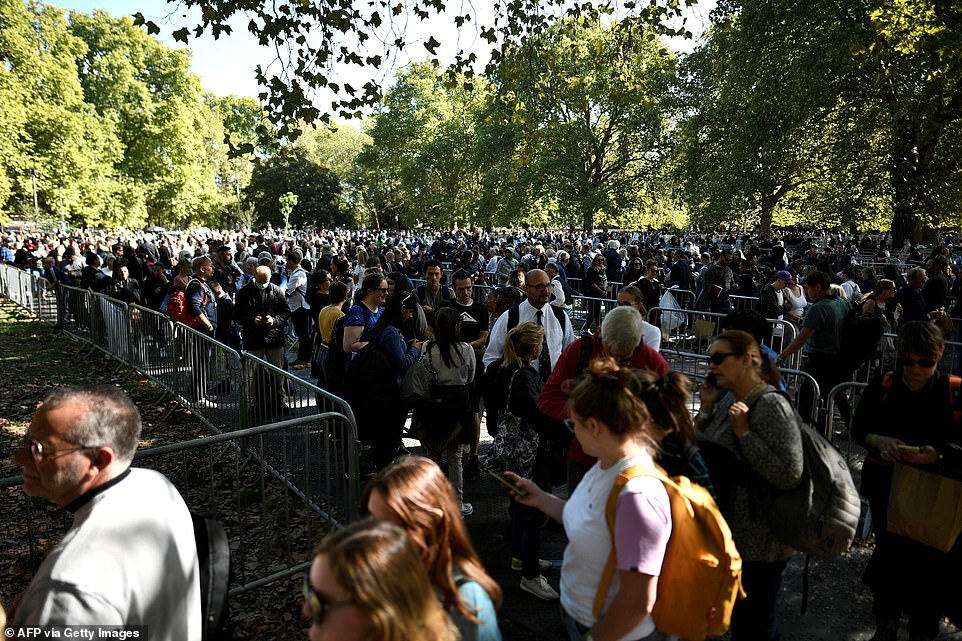 Members of the public join the queue in Southwark Park, south east London 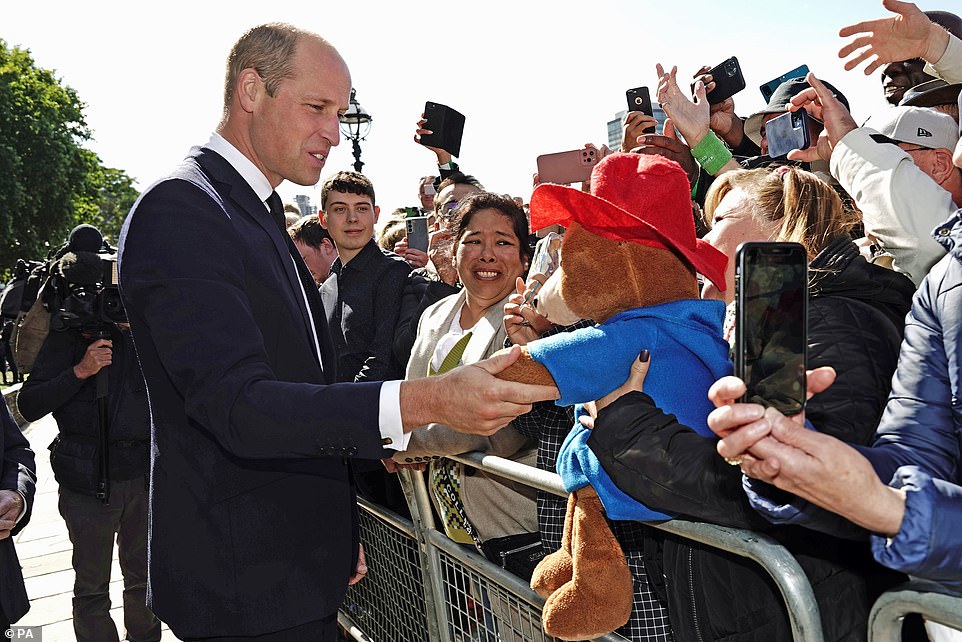 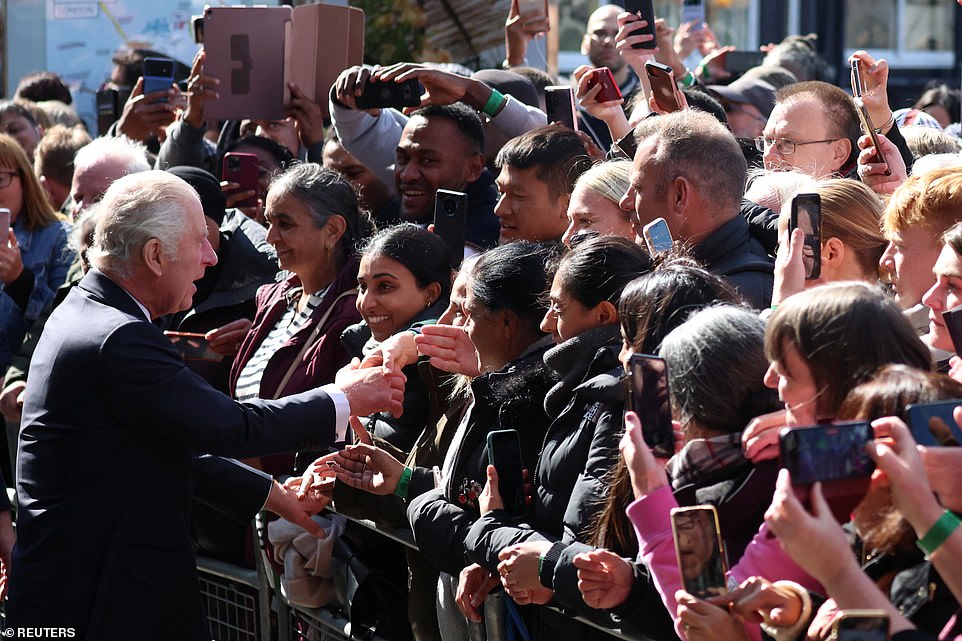 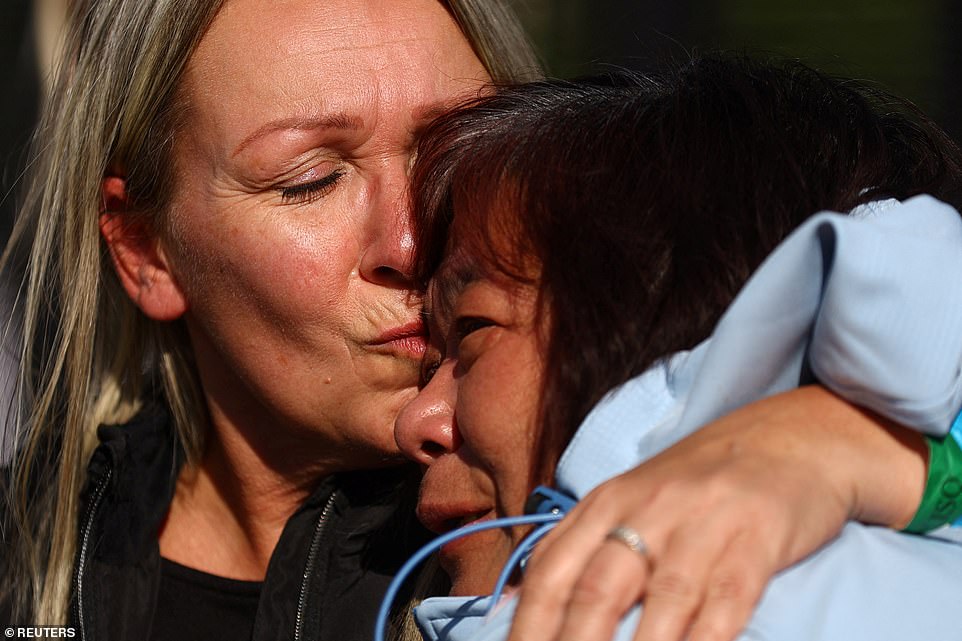 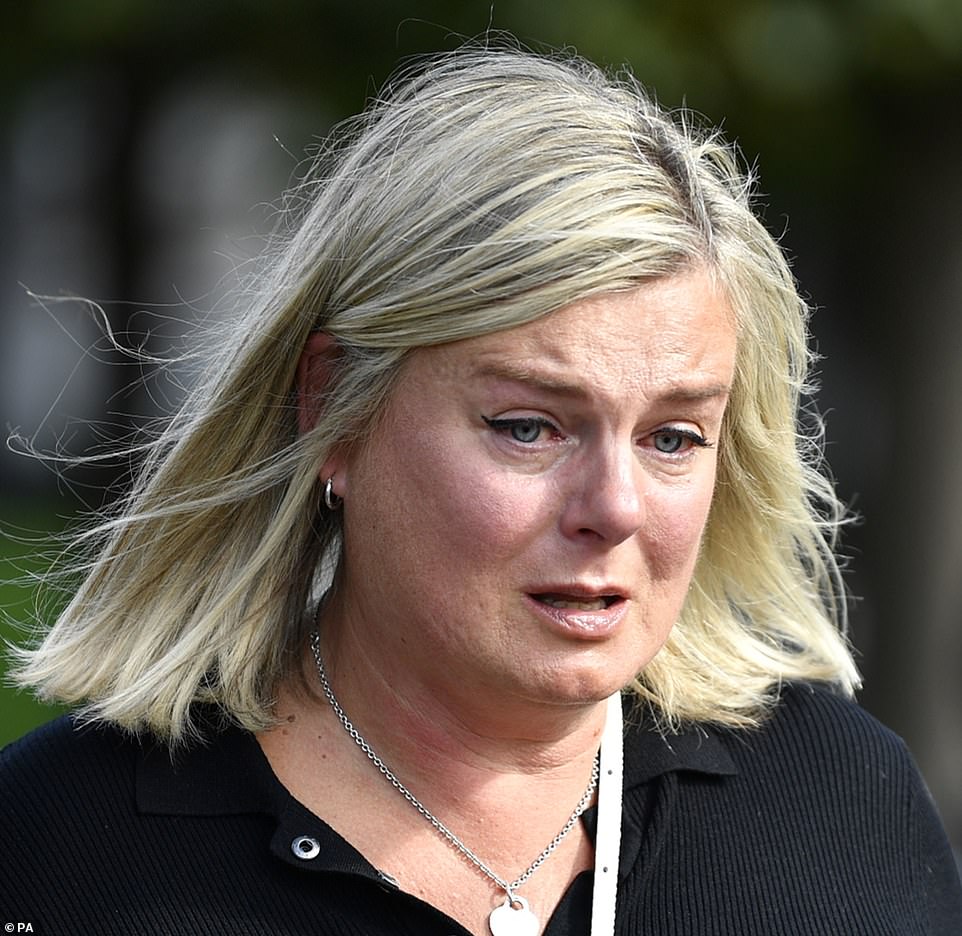 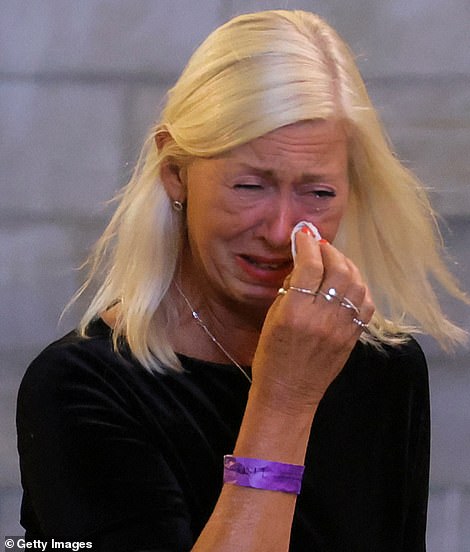 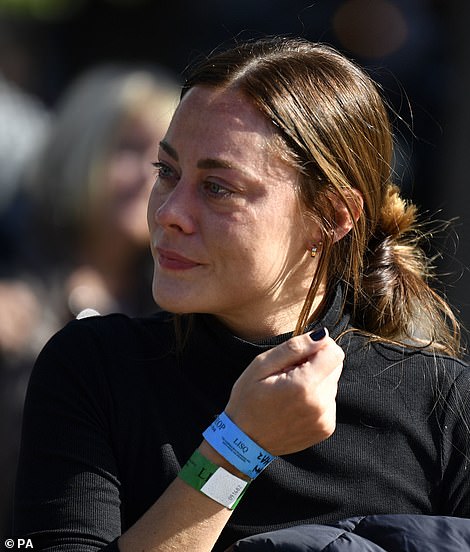 Ms Partridge had brought a walking stick with a seat because of problems with her knee, but otherwise the pair brought nothing with them.

She said: ‘I think we thought that we’re going to get down here and we were going to be turned away. That was the back of our minds anyway.’

Shiv Pandian, 58, from Raynes Park, south-west London, said his 30 years working as a urologist for the NHS had prepared him for a long wait.

‘There’s lots of places to eat and toilets and things; you’re used to working long hours at the NHS,’ he said, laughing. ‘The Queen has served us for 70 years. I’ve served along with her for 30 years. I’ve seen three jubilees of hers, and I want to say goodbye.’

He added: ‘I got out at Waterloo and followed the queue backwards, and then at one point I was guided here to Southwark Park. Then it said reassuringly, it’s 14 hours from the entrance here, so I’m hoping by midnight today I’ll have seen the Queen.’

Paula Priest, 53, from Wolverhampton, said she was happy to wait ‘as long as it takes’ to reach Westminster Hall.

Those who braved the trip despite Government warnings were pleasantly surprised by the pace of the queue.