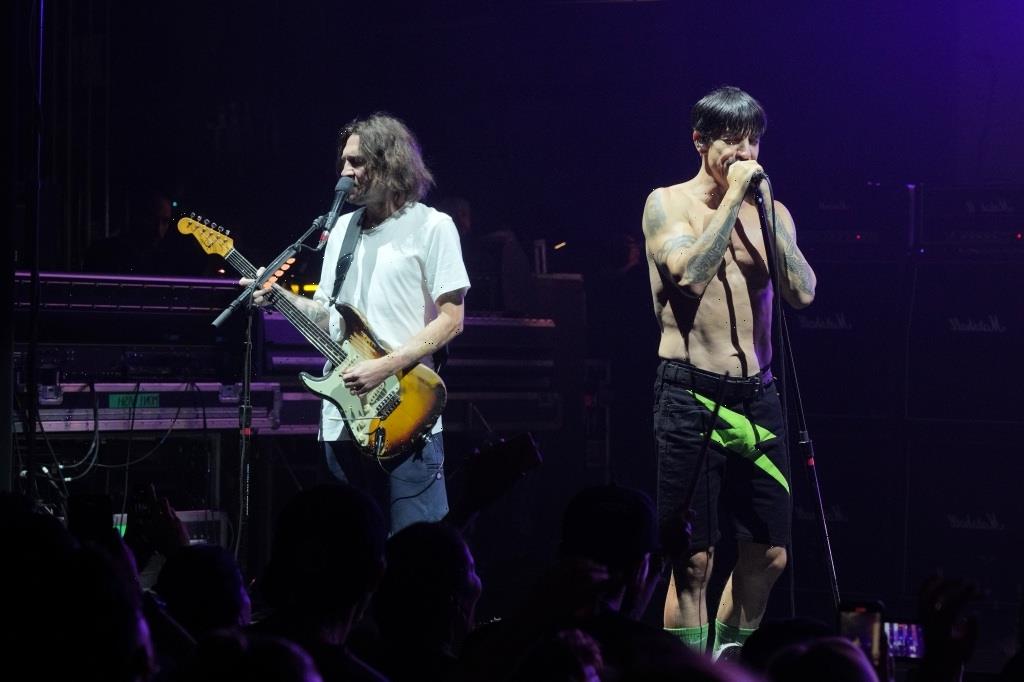 Right before the pandemic hit, Red Hot Chili Peppers fans were thrilled the learn guitarist John Frusciante had once again joined the band. He had left in 2009 to focus on solo work, and frequent collaborator Josh Klinghoffer took up the axe in the band for their next two albums, 2011’s “I’m With You” and 2016’s “The Getaway,” and the subsequent tours. While the band continued to deliver high-energy shows and released many solid tracks, things never meshed as during the Frusciante days.

Yet Frusciante’s return to the fold has ushered in prolific new era for the band, as 2022 brought two lengthy new albums — “Unlimited Love” in April and “Return of the Dream Canteen” in October — and a global stadium tour. As rejuvenated as they’ve been in the studio, the sparks flying in this classic lineup is the best special effect in their live shows. The stripped down production of the band’s Sept. 13 SiriusXM Small Stage Series show at the legendary Apollo Theater in Harlem made it clear to the 1,500 frenzied fans that, even as the band members enter their sixties, they’ve never seemed closer or played tighter.

The set started with Frusciante front and center, jamming a squealing, epic solo as bassist Flea and drummer Chad Smith built a driving groove behind him. Building to the charging opening of “Can’t Stop,” singer Anthony Kiedis bounded onstage as Flea started dancing like a madman. Like a warm blanket, familiarity and nostalgia washed over the crowd.

Everything you could want from a Chili Peppers concert is still on stage as the band approaches their 40th year: Kiedis ditched his shirt a few songs in, while Flea never wore one; Smith kept a heavy groove that allowed Flea plenty of room to dance over his fretboad; Kiedis’ wacky new age dancing made the audience feel great about their own dorky moves; and Frusciante’s soulful playing was the perfect cherry on top.

Yet there was a more immediate, intimate connection between the musicians that was palpable even from the cheap seats. It conjured up in the moments Flea and Frusciante would play face-to-face in the introductory jams to old favorites, creating something new on the path to launching into a sing-along. This intensity seemed to supercharge the always-impressive Smith, who was constantly taking creative fills and went through dozens of sticks as he pounded away. The energy spoke to time lost while Frusciante went solo (including an earlier period from 1992 to 1998, during which he was replaced by Dave Navarro), a chemistry so palpable it’s inspired endearingly sincere Twitter tributes from both Flea and Smith.

The setlist played things safe, toggling between the band’s deep bench of greatest hits (“Dani California,” “Otherside,” “Snow (Hey Oh)” “Give It Away”) and a handful of tracks from “Unlimited Love.” While it seems unlikely that anything new outside of lead single “Black Summer” will appear on future setlists, best in show goes to the Who-esque banger “These Are the Ways,” in which Smith gave his most thunderous drum god performance of the night during the song’s final breakdown.

With the band operating at this level, the night’s only disappointment was that they didn’t use this special occasion to dig in to their back catalogue a bit more. The setlist was nearly identical to their most recent tri-state appearance, a show at MetLife Stadium in New Jersey in August, with the addition of a tasteful cover of Funkadelic’s “What Is Soul.” But the theater full of superfans would have inevitably gone wild for a quirky B-side, or a performance of the funky “Dream Canteen” lead single “Tippa My Tongue,” or even a rarely-played jam from the Klinghoffer or Navarro era.

But that’s a small quibble for a show filled with joy and dancing from the audience and band alike, the sound of a group that has been lost and found but has locked in once more.