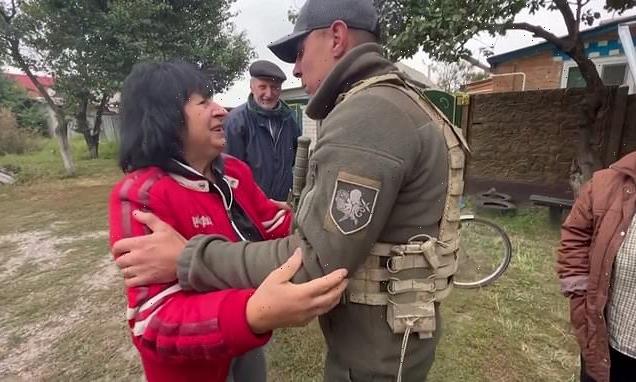 ‘I knew you’d free me!’: Heartwarming moment Ukrainian mother weeps and jumps for joy as she is reunited with her son as her town is liberated after six months of Russian occupation

This is the emotional moment a son reunites with his weeping mother in a Ukrainian village recaptured from Russian troops.

Footage shows Vyacheslav Zadorenko, the mayor of Derhachi District in Kharkiv Oblast near the Russian border, hugging his relieved mother in his liberated hometown after six months behind enemy lines.

Ukraine’s remarkable push has seen a huge swathe of territory around Kharkiv freed from Putin’s grip and forced his soldiers to surrender and flee in an embarrassing setback to his brutal invasion.

Zadorenko shared the video of the reunion online, saying: ‘The day I was waiting for more than anything in my life – meeting my dear mother!’

The mayor is seen getting out of his car and immediately embracing his tearful mother who says: ‘Vyacheslav, my dear! I’ve been waiting, I knew you’d return. My flower has blossomed. I thought it would die, but it grew and blossomed. My golden ones, my treasure!’ 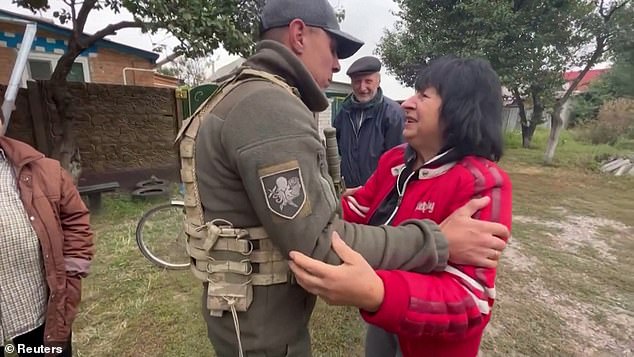 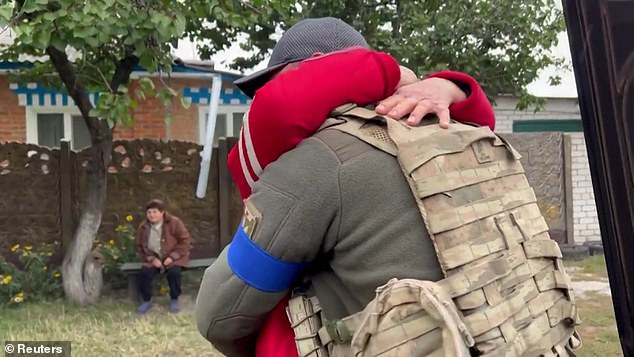 Vyacheslav Zadorenko, the mayor of Derhachi District in Kharkiv Oblast near the Russian border, hugs his relieved mother

The mother then hugs other men in uniform in the touching video, saying: ‘We managed to keep everything safe. I waited for you to return! I took all your things and kept them safe. The only thing is that the house was mined, I’ve been told.’

Zadorenko adds: ‘I’ve missed you so much.’

In a typical maternal way, the mother then tells her son she has prepared lots of borscht for him, a Ukrainian staple dish, and offers to feed him right away.

After he tries in vain to make her calm down, she says: ‘I knew you’d come and free me. All of us in Kozacha knew this day would come. At the gas station they told me you were coming.’

Zadorenko then insists that his parents must leave their house for a safer place. 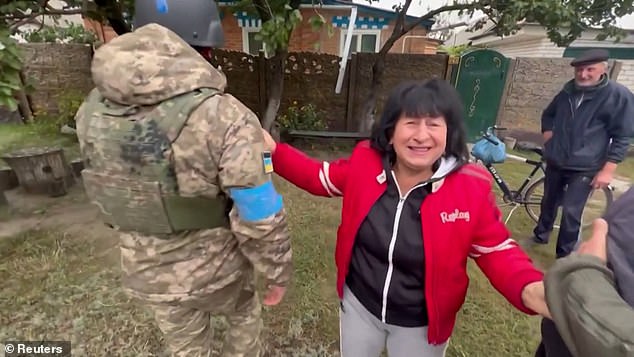 Zadorenko shared the video of the reunion online, saying: ‘The day I was waiting for more than anything in my life – meeting my dear mother!’ 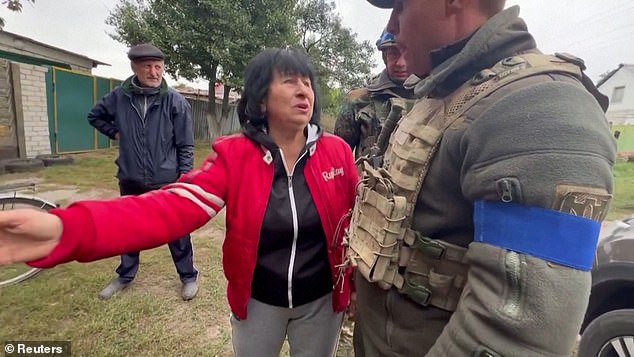 He tells her and his father to pick their things for a few days while Ukrainian forces come and demine the village.

The mayor said the group came ahead of the other forces to meet their family members and help get them to safety.

The heartwarming footage has been widely shared online, including by JK Rowling.

It comes as Volodymyr Zelensky helped raised the Ukrainian flag over the newly-recaptured Russian stronghold of Izyum as he celebrates the stunning advance that routed Putin’s forces in the north of the country.

The Ukrainian president took part in a minute of silence for fallen soldiers before congratulating those still fighting on their victory.

He then raising the flag in triumph over the city – which previously served as the launchpad for the Putin’s mission to seize the entire Donbas region. 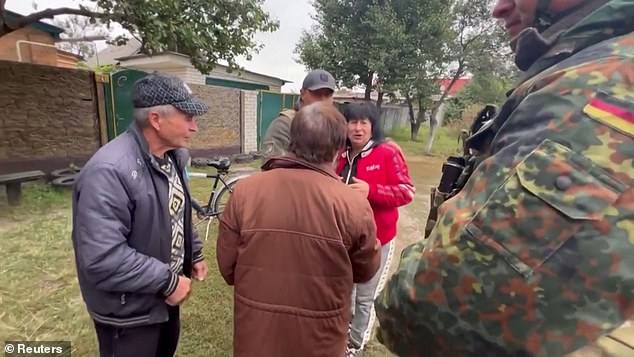 In a typical maternal way, the mother then tells her son she has prepared lots of borscht for him, a Ukrainian staple dish, and offers to feed him right away 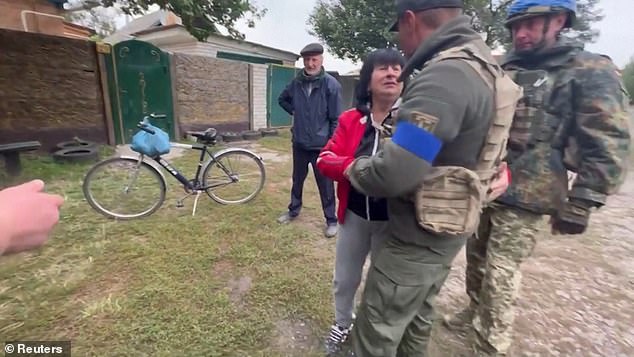 ‘Ukraine is taking back its own,’ a military spokesman said, as a growing hope of overall victory against Putin’s forces begins to spread across the country in the wake of Russia’s most-recent battlefield humiliation.

The scale of the unfolding military disaster is so great that not even the Kremlin’s sock-puppet propagandists are trying to disguise it, instead telling viewers on Monday night of a ‘serious defeat’ while considering – for the first time – the prospect of total defeat in Ukraine.

Karen Shakhnazarov, a film-maker and Kremlin loyalist, told viewers of Vladimir Solovyov’s nightly show that Russia is now in a ‘very difficult situation’ against a ‘strong adversary’ – adding that Moscow’s armed forces ‘were not ready’ for what he finally admitted is a ‘war’ and not a ‘special military operation’.

‘This war can only end with the defeat of one of the sides,’ he said. ‘For us, this defeat may prove fatal… it may lead to the disintegration of the country.’

Underlining that sense of impeding victory, the Ukrainian mayor of the occupied city of Melitopol said overnight that Russian troops are starting to withdraw – having held that territory since the early days of the war. 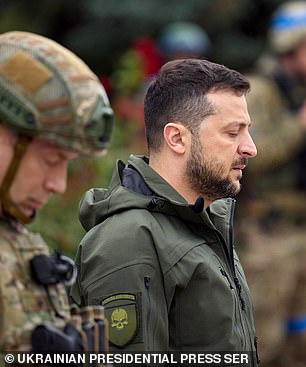 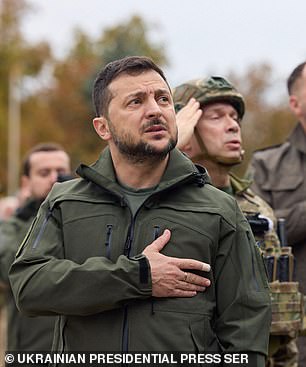 Zelensky took part in a minute of silence for fallen soldiers (left) before watching as the Ukrainian flag was raised over the city, amid a growing hope that overall victory against Putin’s forces is possible 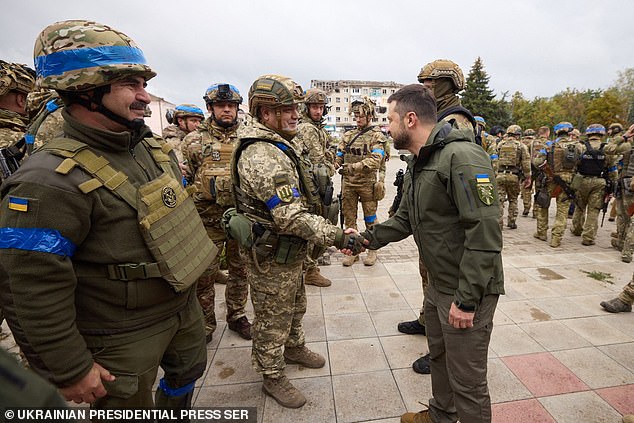 One of Ukraine’s commanders shakes Zelensky’s hand in the recaptured city of Izyum, which was liberated from Russian control in a rapid counter-attack by Kyiv’s forces last week 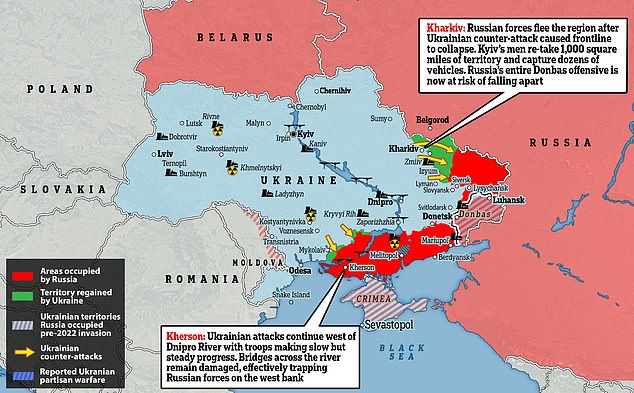 Ivan Fedorov wrote on Telegram that columns of military equipment were reported at a checkpoint in Chonhar, as Russian troops apparently beat a retreat to occupied Crimea.

If Ukraine has forces capable of re-taking the city, then it would break the so-called ‘land bridge’ that Russia spent months establishing between occupied areas of Donbas and Crimea.

That would mean Russian forces currently fighting tooth-and-nail for the city of Kherson would be all-but cut off from resupply from the mainland, except for the vulnerable bridge crossing the Kerch Strait.

It would also open up an avenue for Ukraine to attack Mariupol – the now-destroyed city that Russia made one of the main targets of its ‘special military operation – and further weaken the position of its forces in Donbas.

Russian troops in Donetsk and Luhansk – the two regions which together make up the Donbas – are already in a precarious position after Ukraine’s counter-attack out of Kharkiv severed some of their main supply routes. 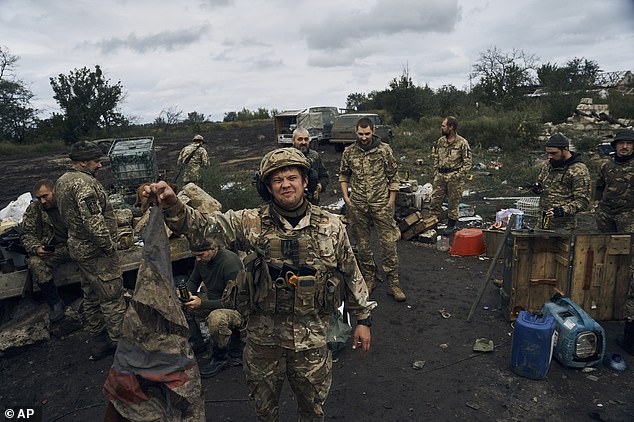 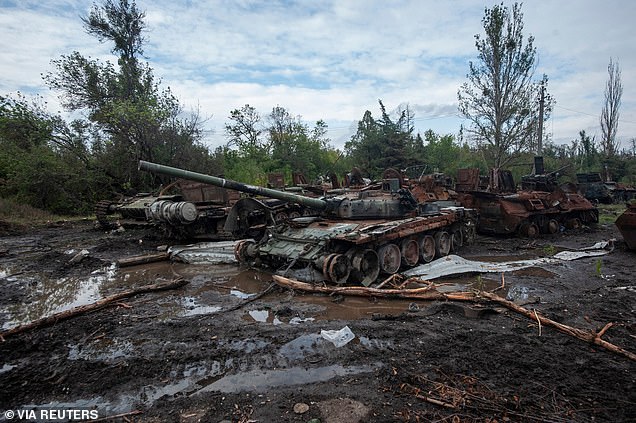 The cities of Izyum, Kupyansk and Vovchansk which formed the staging post for its attacks in the region and contain key railway lines to get ammo and other supplies to its soldiers are now under Ukrainian control.

Kyiv’s rapid advance has now slowed as Russian troops regroup and try to re-establish a frontline, with fighting said to be ongoing around Lyman, Rubizhne, Lysychansk and Severodonetsk.

In the newly freed village of Chkalovske in the Kharkiv region, Svitlana Honchar said the Russians’ departure was sudden and swift.

‘They left like the wind,’ Honchar said Tuesday after loading cans of food aid into her car. ‘They were fleeing by any means they could.’

Some Russians appeared to have been left behind in the hasty retreat. ‘They were trying to catch up,’ she said.

It was not yet clear if the Ukrainian blitz, which unfolded after months of little discernible movement, could signal a turning point in the nearly seven-month war.