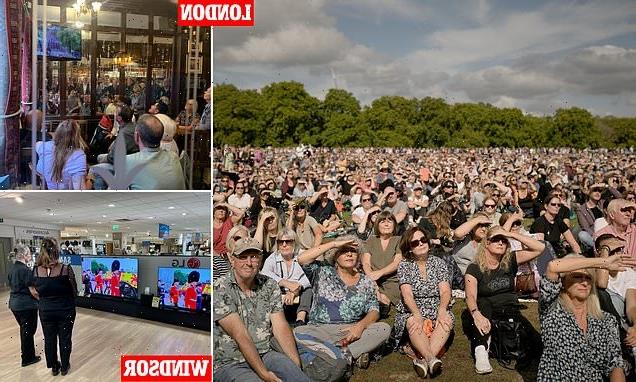 Britain grinds to a halt to watch Queen leave her palace for the last time: Mourners pack out Hyde Park, cram into pubs and stand in silence in department stores to watch sombre procession

Thousands of mourners have packed out Hyde Park while others have crammed into pubs and stood in silence in department stores to watch as the Queen’s coffin left Buckingham Palace for the final time.

Emotions were running high in the central London park, as members of the public watched in silence as King Charles III and other senior royals, including his sons Princes William and Harry, walked behind the Queen’s coffin to Westminster Hall.

Several spectators were seen wiping away tears during the 38-minute coffin procession to Westminster Hall, which will mark the beginning of the Queen’s lying-in-state that will last for four days until the morning of her state funeral on September 19.

Elsewhere, people were seen gathering around TV screens in pubs, offices and department stores as the procession, which began at precisely 2.22pm, proceeded along The Mall, Horse Guards Road, across Horse Guards Parade and onto Whitehall to Parliament Square and into the Palace of Westminster.

Pulled on a gun carriage of The King’s Troop Royal Horse Artillery, the coffin was draped with a Royal Standard and adorned with the priceless, glittering Imperial State Crown.

Taking the lead was the pomp and pageantry of the Household Cavalry Mounted Regiment and military bands. 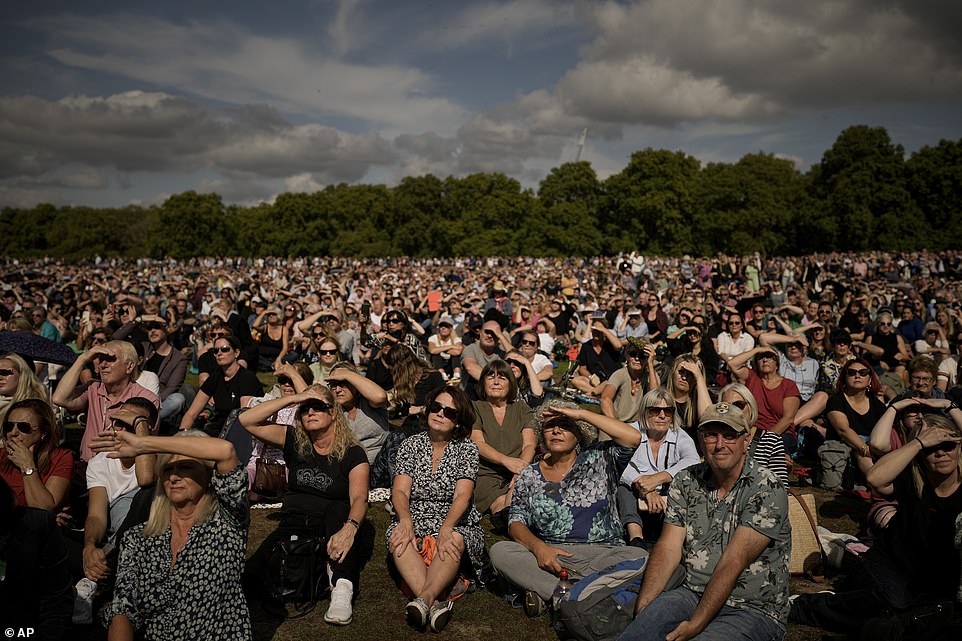 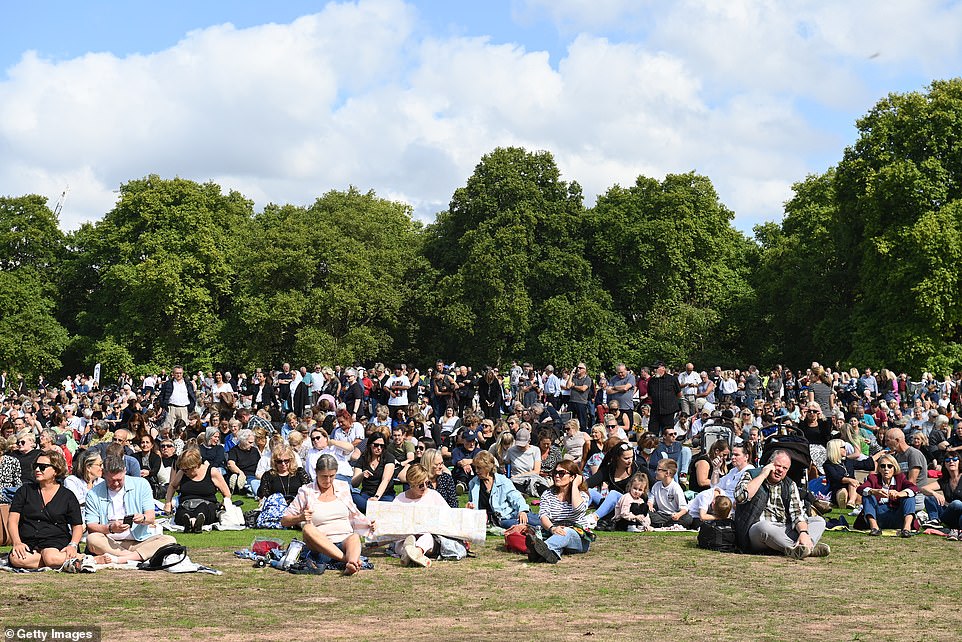 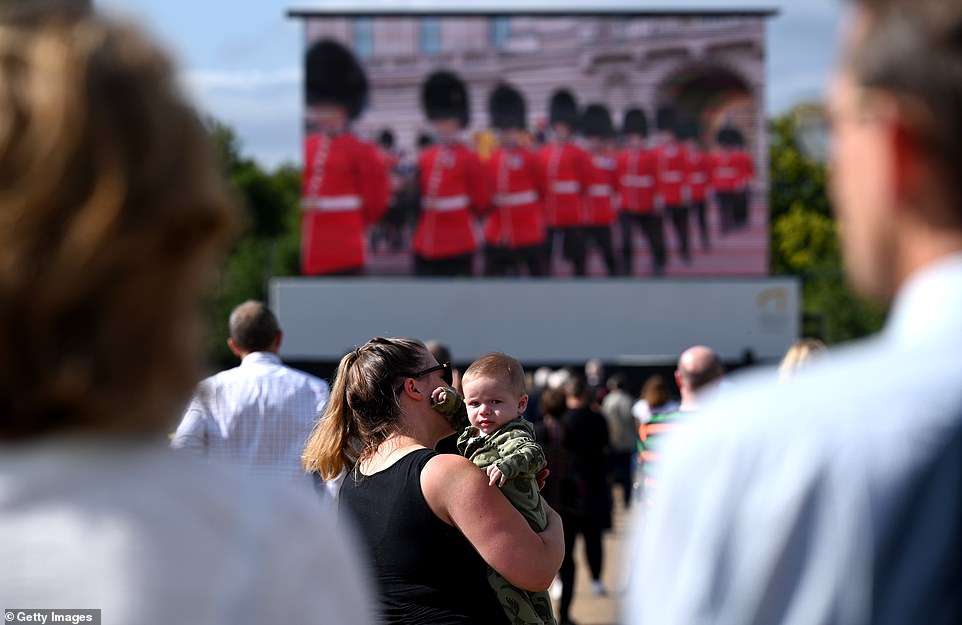 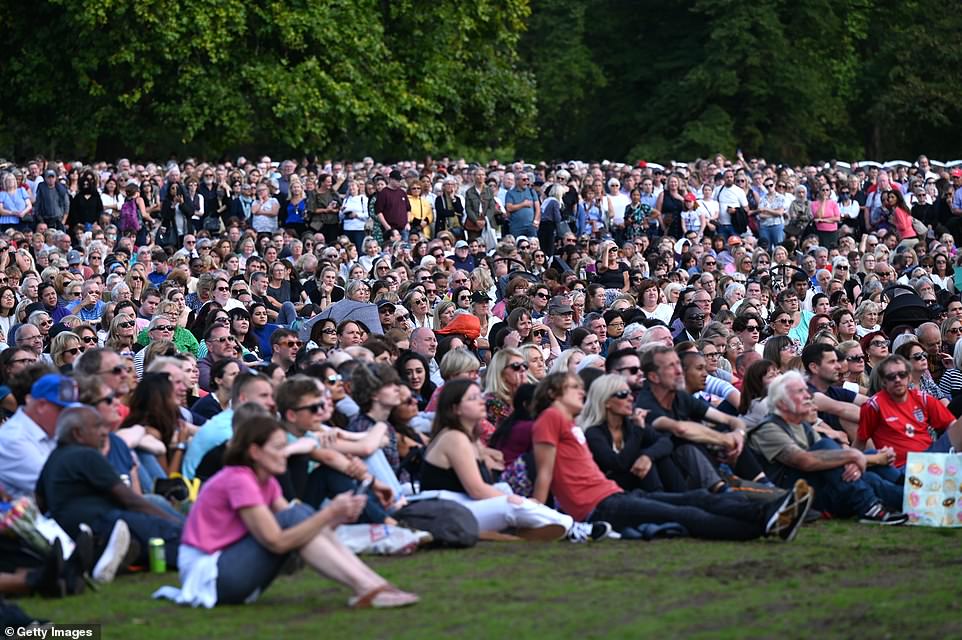 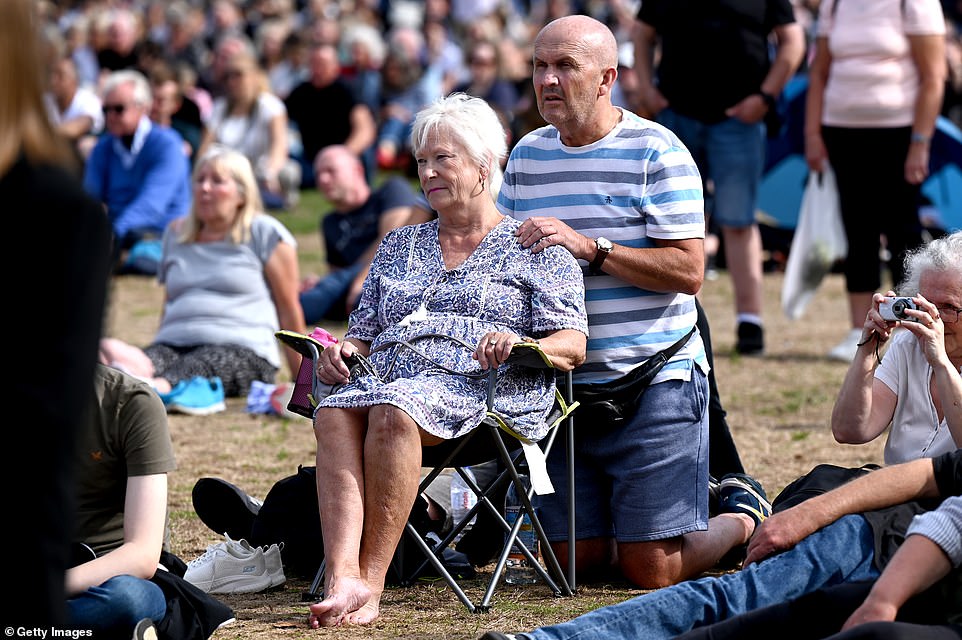 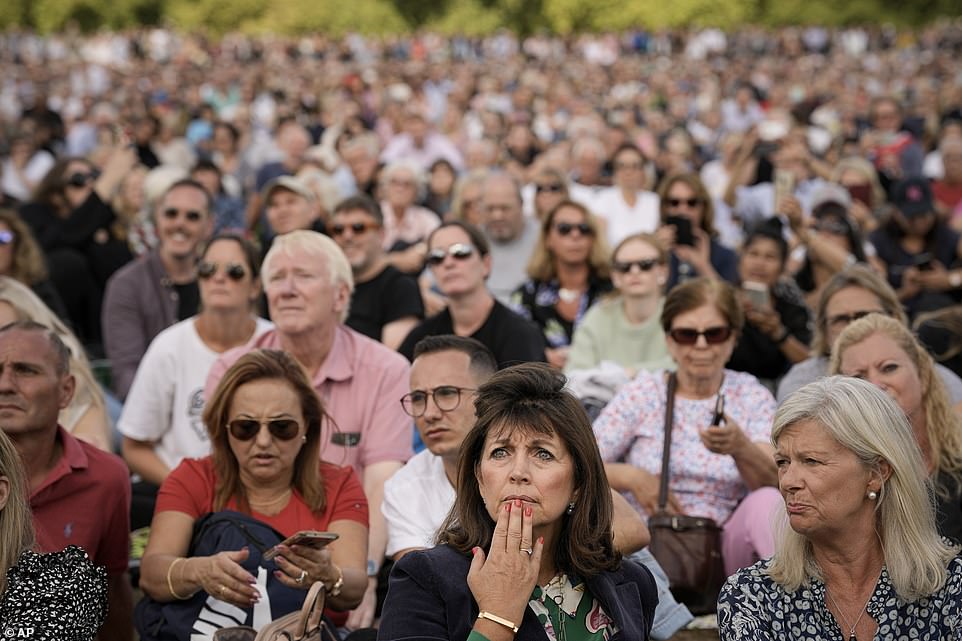 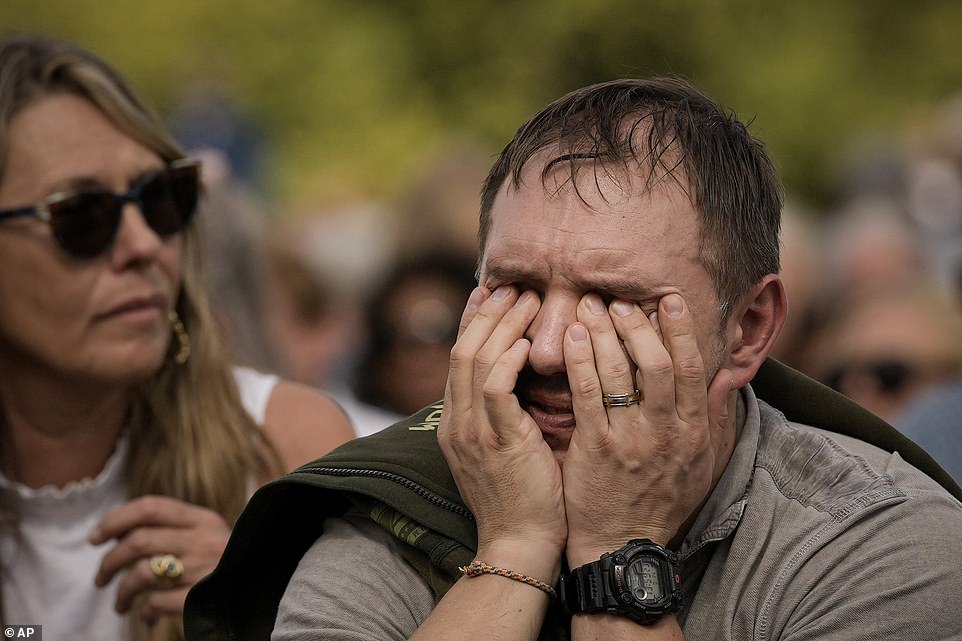 A man could be seen holding his head in his heads in Hyde Park, central London as Queen Elizabeth II’s coffin procession took place on Wednesday afternoon 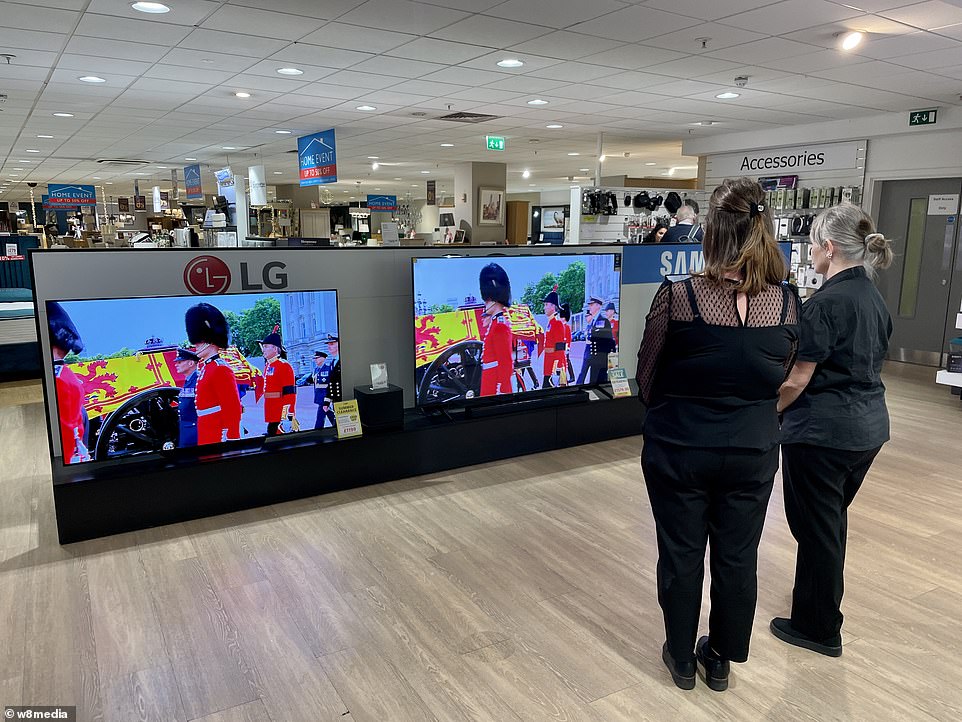 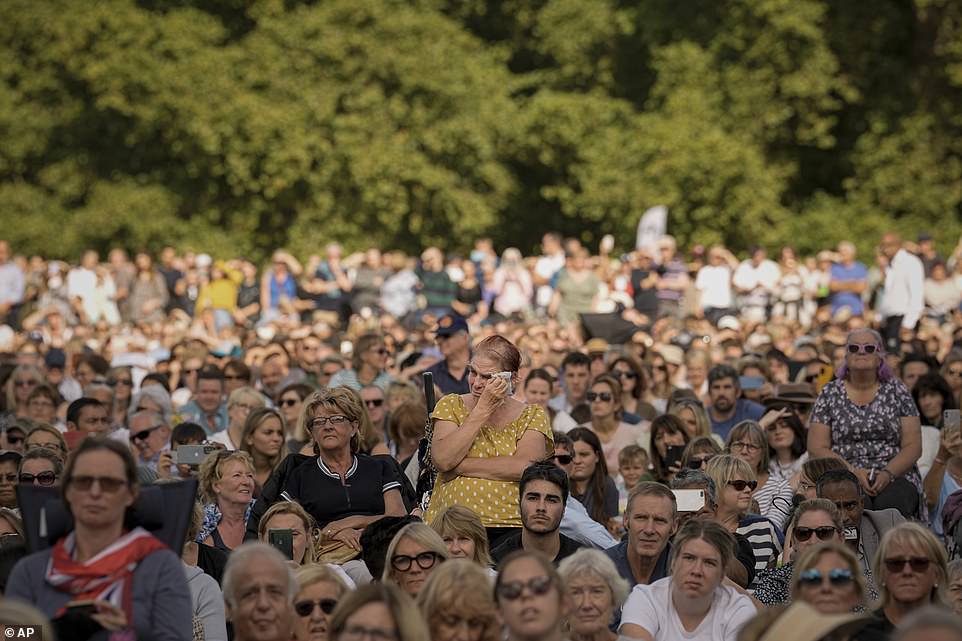 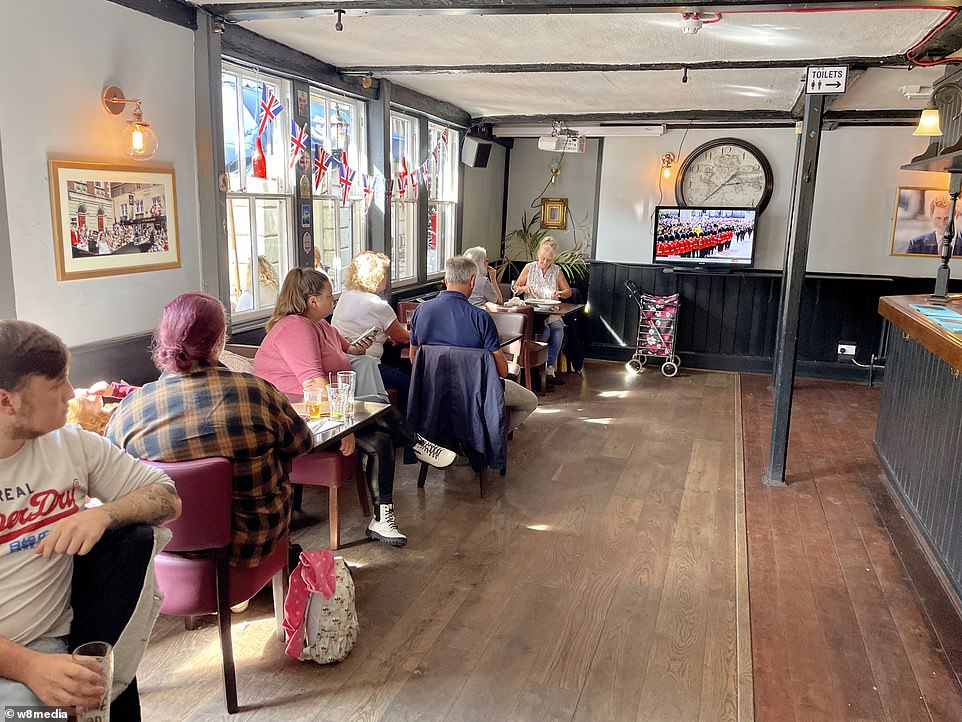 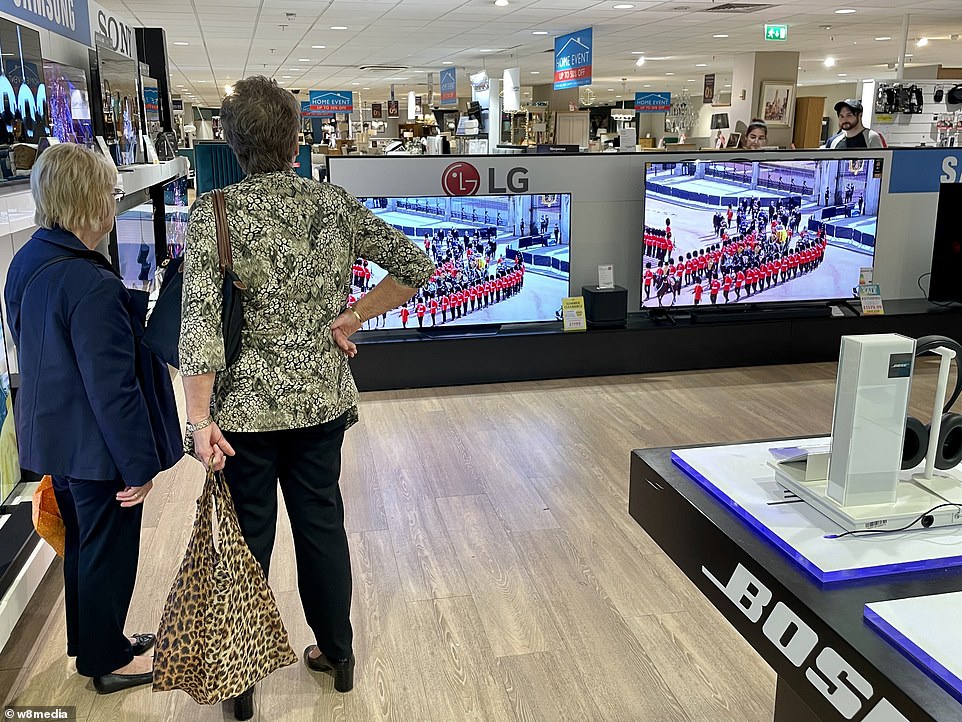 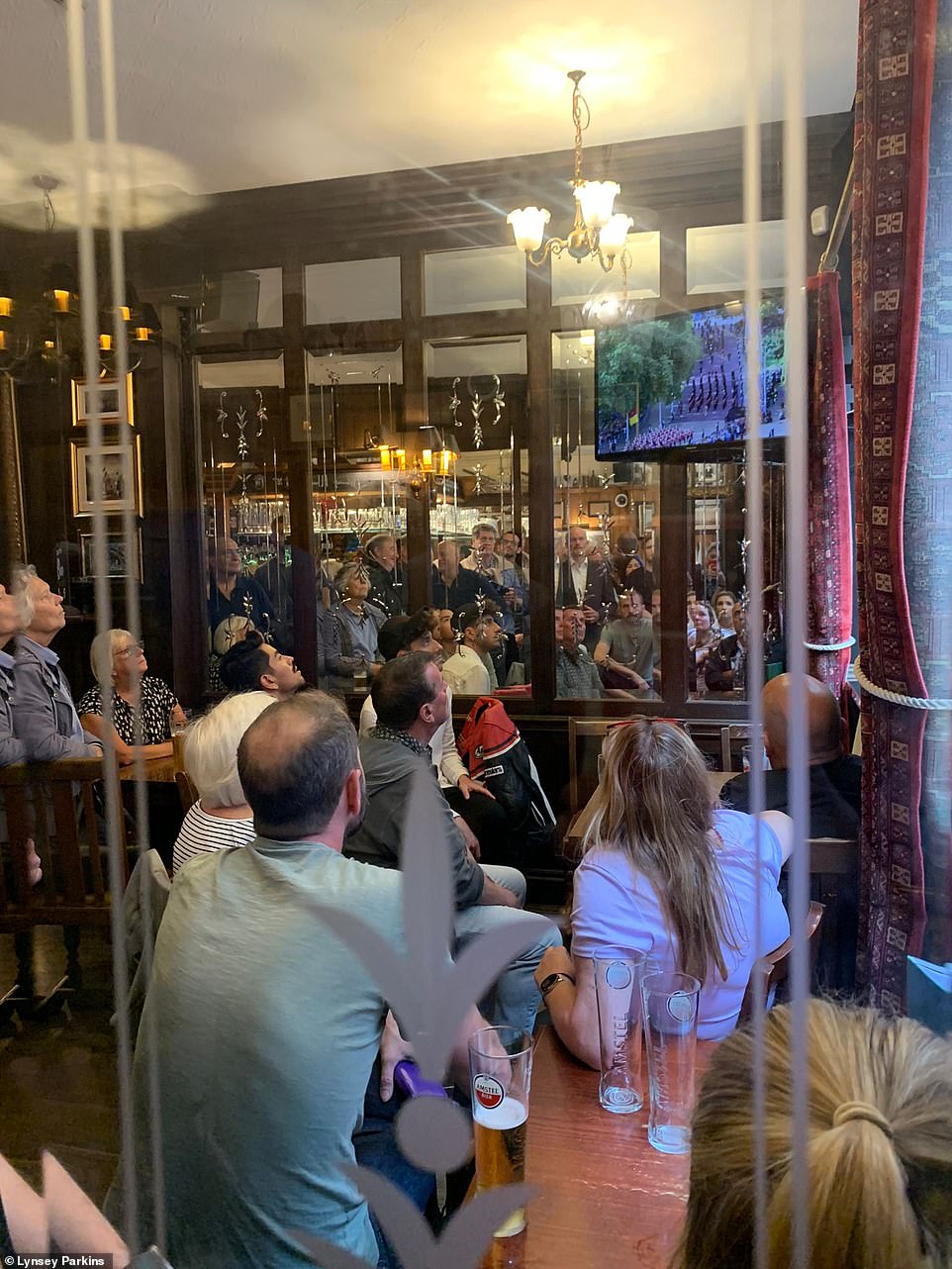 People watched the procession from The Ship and Shovell pub in Charing Cross, central London

In the capital, thousands of mourners flocked to see the moving sight of the Queen departing the official residence where she spent so much of her working life at the heart of the nation, with viewing areas declared full ahead of the procession starting.

The Queen’s coffin was transported on the George Gun Carriage, which carried King George VI’s coffin from Sandringham Church to Wolferton Station in February 1952 and was used during the funeral of the Queen Mother in 2002.

An estimated 800 military personnel took part in today’s procession, in their own tribute to the Queen who was the head of the armed forces.

Tears filled the eyes of the hundreds of thousands of public mourners as the Queen’s coffin made her final poignant journey from Buckingham Palace this afternoon.

A solemn and respectful silence greeted the emotionally powerful sight of Her Majesty’s coffin being taken to Westminster Hall.

After a life of dignity and service, the coffin being pulled by horse past her loyal subjects marked what would be the last time some would see her.

It was exactly 2.22pm when King Charles III led his family on foot towards the ancient hall at the heart of the Palace of Westminster where his mother’s coffin will sit.

The occasion was expected to be heavy with historical significance, and saw brothers Prince William and Prince Harry set aside their ongoing feud to support their father by marching with him behind the coffin. 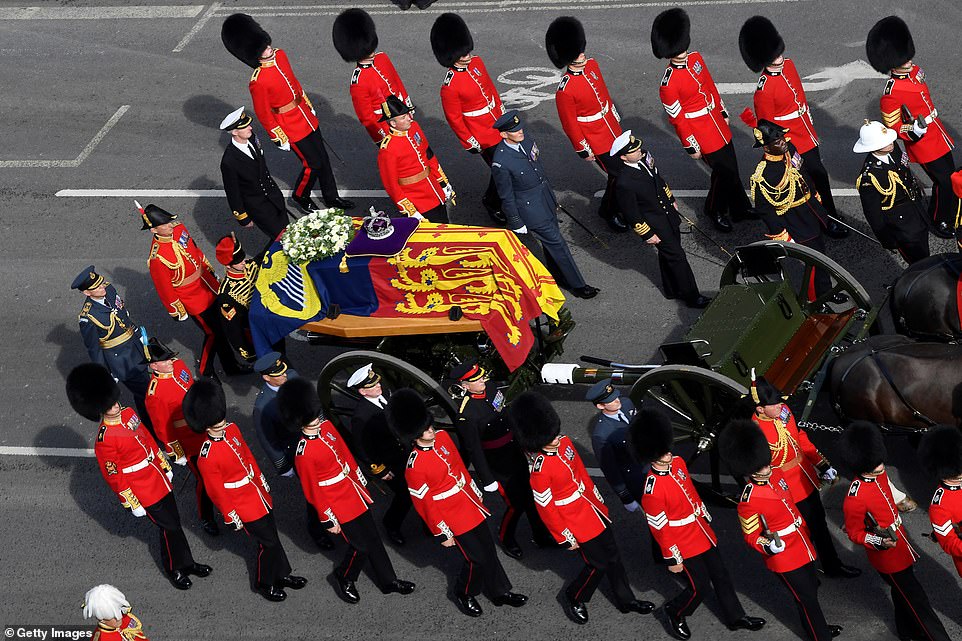 Once the procession had arrived at Westminster Hall, a brief service was held, led by the Archbishop of Canterbury.

From 5pm mourners will be able to file past the coffin to pay their respects to Britain’s longest-reigning monarch with an estimated one million people expected to queue for up to 30 hours to see her before the state funeral on Monday. The queue is already more than two miles long.

During an extraordinary 38-minute march down a packed Mall and down to Parliament Square, Her Majesty’s children and grandchildren, led by King Charles III, delivered her to Westminster where she is laid to rest before her funeral next Monday.

The Archbishop of Canterbury then read the opening prayer, which the King led the royals in reciting. The family stood silently for the short service that the late monarch had put together with the Church of England before she died aged 96. 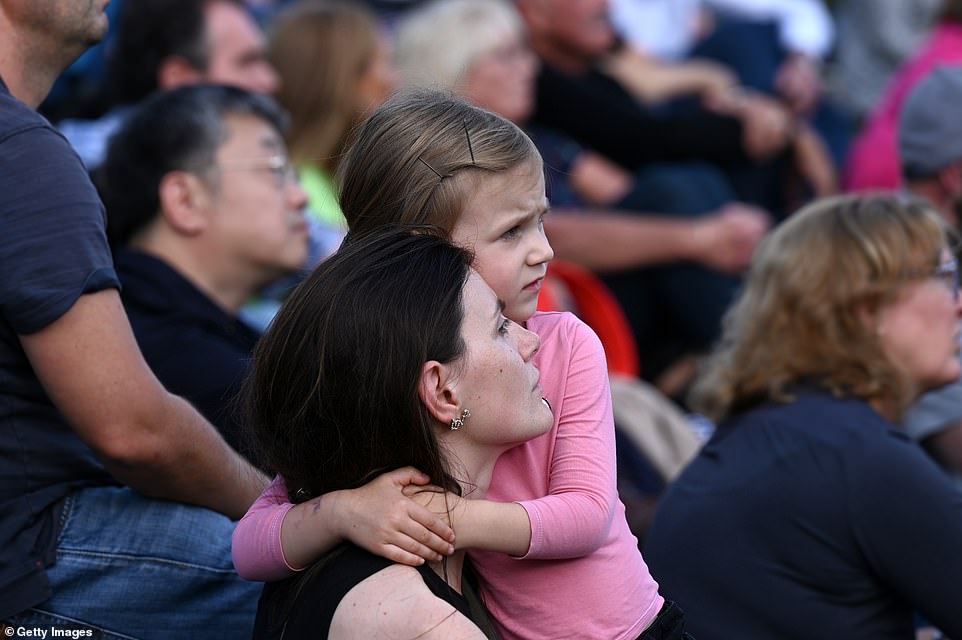 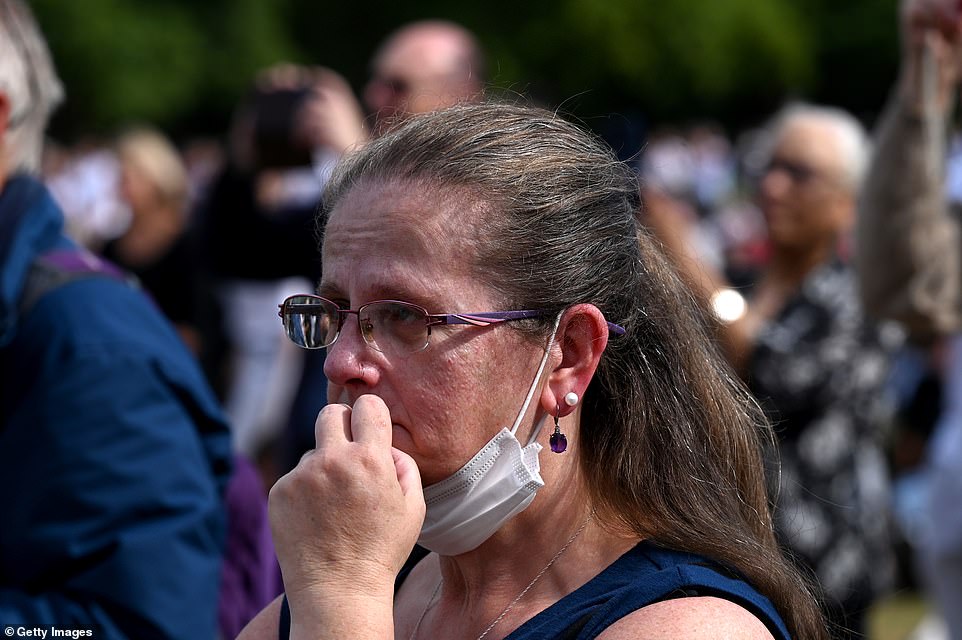 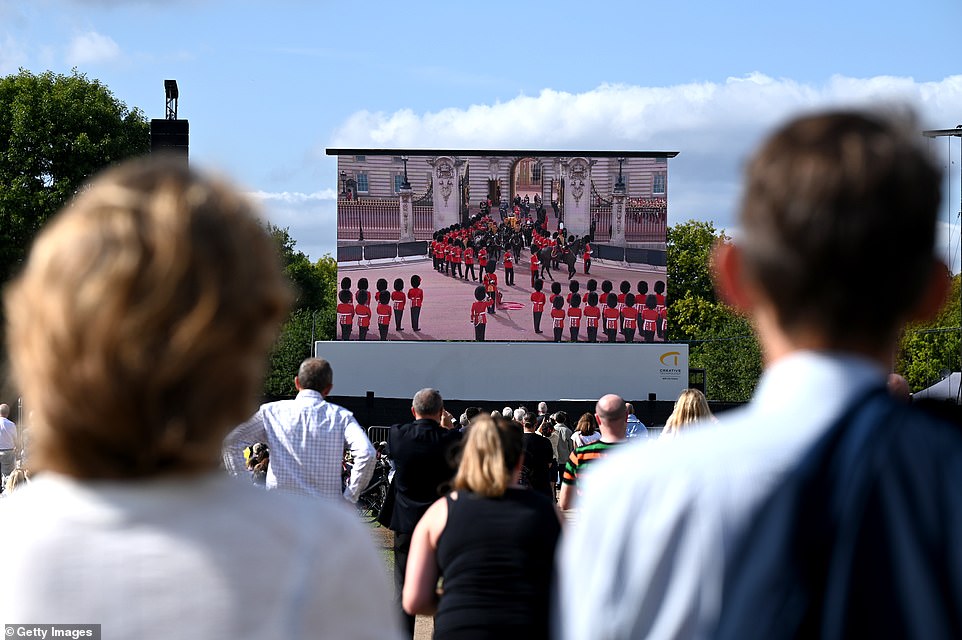 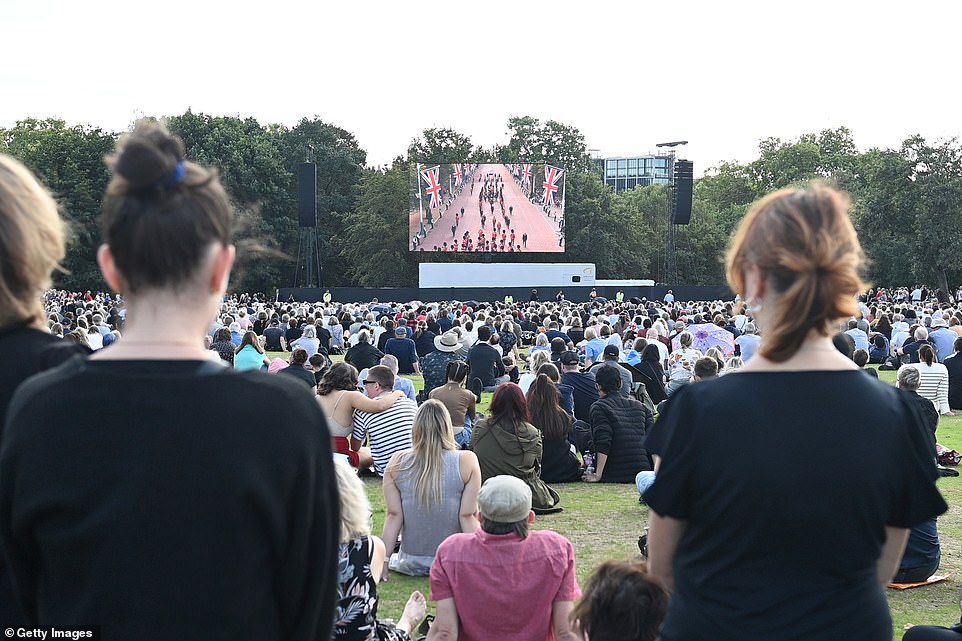 Cries of ‘God save the King’ could be heard as the King and the Queen Consort left Westminster Hall as Big Ben rang out at 3.30pm.

Royal couples left the building side by side, with the Duke and Duchess of Sussex holding hands and the Princess of Wales rubbing her husband’s arm reassuringly.

At 2.22pm today Her Majesty was carried down The Mall on a gun carriage – a tradition dating back to the death of her great-grandmother Queen Victoria in 1901 – as her children, grandchildren and other senior royals marched behind in time to a funeral march.

The Queen arrived at Westminster Hall at 3pm – where she was placed on a catafalque – a raised platform, with her crown, orb and sceptre on top. The monarch will lie in state there for four days and five nights.

William and Harry again set aside their feud and stood next to each other as they accompanied their beloved grandmother to Parliament. Their wives travelled separately in cars behind. 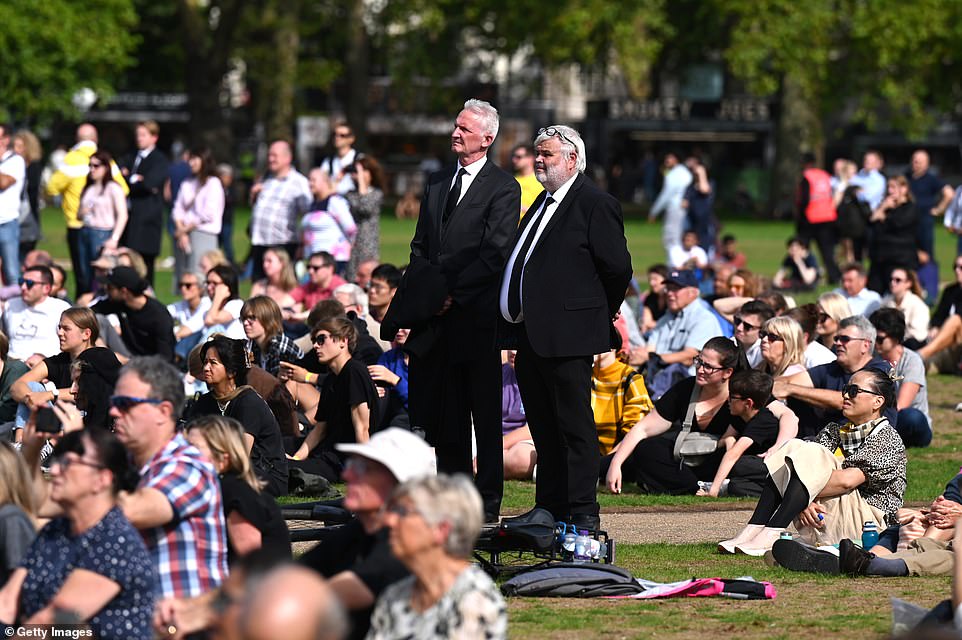 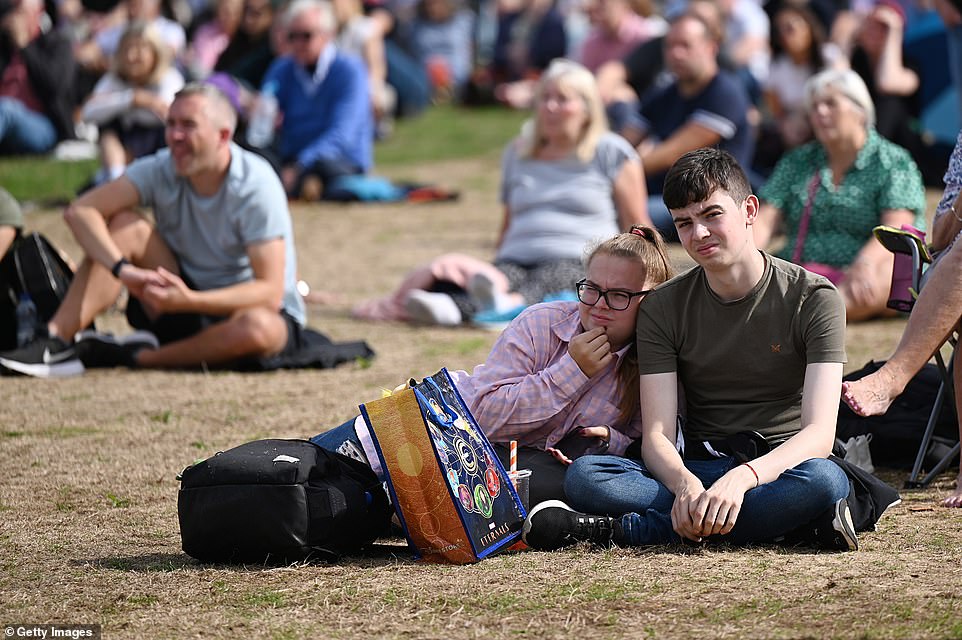 During the service, the senior royals stood in formation facing the coffin on its purple-covered catafalque, which was flanked with a tall, yellow flickering candle at each corner of the wide scarlet platform.

The King and Queen Consort stood together a metre or so apart, with the Princess Royal and Vice Admiral Sir Tim Laurence behind them, then the Duke of York alone, and in the next row the Earl and Countess of Wessex.

Behind them were the Prince and Princess of Wales, with the Duke of Sussex behind William, and the Duchess of Sussex directly behind Kate. The Cross of Westminster was placed at the head of the coffin.

When the Queen arrived, Charles, William and Anne saluted. Harry and Prince Andrew – barred from wearing military uniform – bowed their head instead.