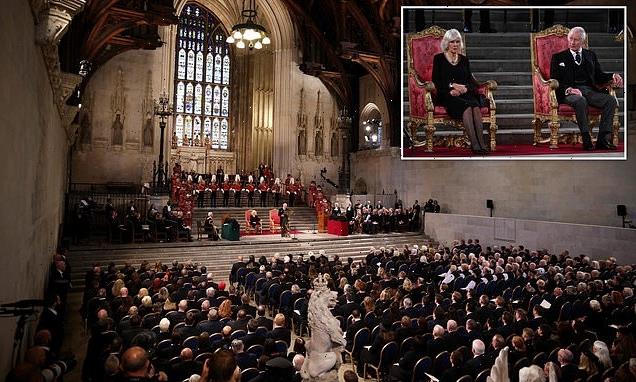 Under ancient arches, God Save The King rang out – in resounding fortissimo: HENRY DEEDES watches as the King addresses MPs

Hearing the state trumpeters let rip, at full parp, in ear-splitting crescendo is a sound that provokes a heart-pumping, chest-swelling sense of emotion.

And as those pitch-perfect blasts rang out around the cold slab flagstones of Westminster Hall yesterday morning, the vast sea of black stretching all the way back to the entrance suddenly rose as one.

The King had arrived.

Outside, the crowd swarming around Parliament Square let out a mighty cheer. There was a flurry of flashbulbs and that still unfamiliar cry of ‘God Save The King!’

As Charles emerged gingerly from his stately Rolls and stood, gently stooped and dwarfed by the hall’s hulking masonry, he appeared somewhat daunted at what lay ahead. His first address to Parliament. One could hardly blame him. 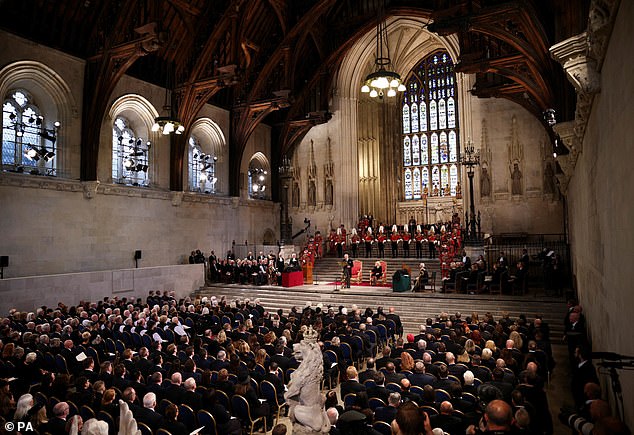 HENRY DEEDES: Hearing the state trumpeters let rip, at full parp, in ear-splitting crescendo is a sound that provokes a heart-pumping, chest-swelling sense of emotion. Pictured: King Charles III gives his address thanking the Lords and Commons for their condolences at Westminster Hall on September 11

The hall is an imposing place, haunted by the shades of our kings and queens dating back to the 11th century, and by great names from our own times.

Mandela has spoken here. So, too, Barack Obama and Charles de Gaulle.

But no sooner had he stepped through the giant doorway, with Camilla a half pace behind him, the burden of expectation seemed to melt away. Suddenly, there was a proprietorial air about King Charles III.

Gone too were those nervy tendencies, that habit he developed as Prince of Wales, of twiddling his cufflinks and fidgeting with his signet ring. He exuded quiet authority and unshakeable confidence.

The atmosphere in the hammer-beamed Norman hall was now bristling. Hundreds of members of both Houses had crammed inside to be part of a moment in history. As the King made his way down the aisle, some MPs nodded their heads in respect. Others, such as Tory MP Simon Hoare, launched themselves into a deep bow.

Prime Minister Liz Truss was seated alongside Labour leader Sir Keir Starmer and the SNP’s Ian Blackford. Blackford had chosen to wear a kilt for the occasion, revealing a pair of legs whiter and pastier than two pints of gold-top milk. 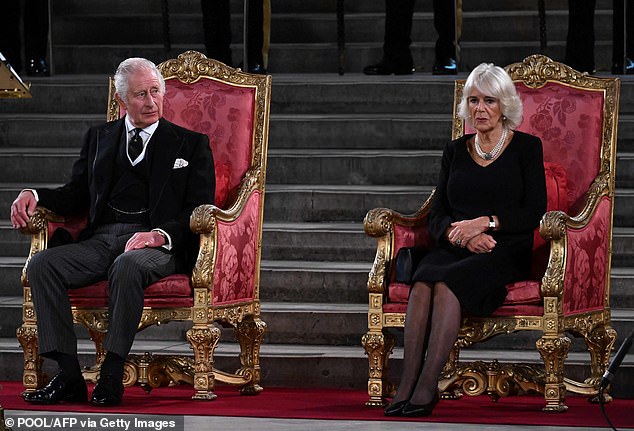 An explosion of custard-coloured hair at the front of the hall betrayed the location of Boris Johnson. He had been seated next to Theresa May. Tactful. Not. The two ex-PMs barely exchanged words.

And, good Lord, was that the noted revolutionary Jeremy Corbyn sitting down? It most certainly was.

Meanwhile, standing to attention on the hall’s steps were a clutch of Beefeaters trussed up in their magnificent livery, white plumes swishing, their ceremonial swords clinking with every movement.

The King and his Queen Consort eventually took their seats on a pair of pink thrones – the first time they have been so seated since the Queen’s death. Camilla grinned nervously, the diamonds on her pearl necklace twinkling like Long John Silver’s gold tooth. We heard first from the two Speakers.

Lords Speaker Lord McFall paid tribute to the late Queen, whom he described as a ‘leader of her people, and a servant of them too’ whose humility had ‘commanded respect and captured the imagination of peoples and nations across the globe’.

His Commons counterpart Sir Lindsay Hoyle, resplendent in a gold and black robe and a raffish white cravat, observed in a well-judged contribution that the Queen’s death had been ‘felt around the world’. 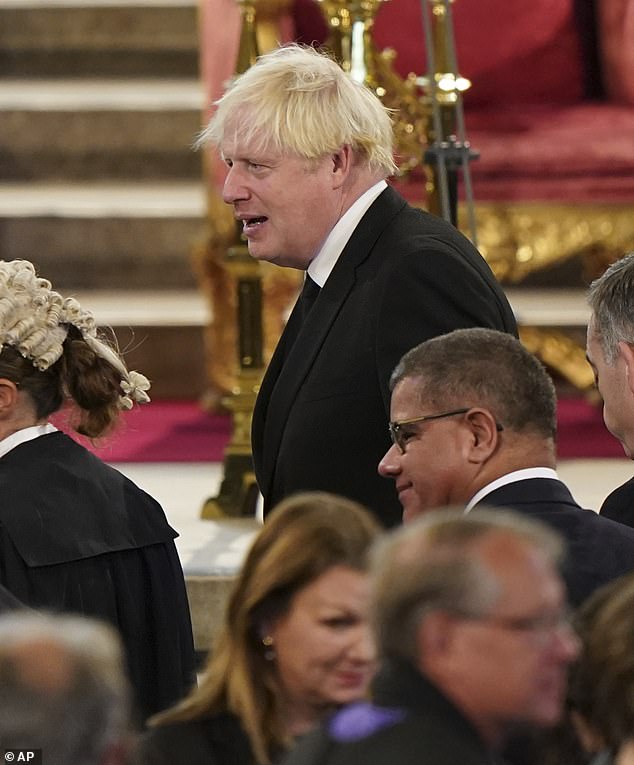 An explosion of custard-coloured hair at the front of the hall betrayed the location of Boris Johnson. He had been seated next to Theresa May. Tactful. Not. The two ex-PMs barely exchanged words

(Incidentally, I spotted Camilla and Sir Lindsay chatting outside afterwards. My betting is the Queen Consort enjoys tuning into the ding-dongs each week at PMQs.)

The King looked on, his face a picture of quiet contemplation as he perched almost languidly in his throne.

No doubt he is exhausted, emotionally and physically after the events of these past extraordinary days. Then, addressing both Houses from a gilded lectern, Charles confessed he felt the deep gravitational pull of his surroundings.

‘As I stand before you today, I cannot help but feel the weight of history which surrounds us and which reminds us of the vital parliamentary traditions to which members of both Houses dedicate yourselves with such personal commitment, for the betterment of us all,’ he said.

He spoke slowly and precisely, a theatrical pause here and there. Effort had obviously been put not just into his speech’s composition but in its delivery too.

He thanked those present for their tributes to the Queen. And, just as he had in his moving and memorable address to the nation last Friday, he turned to Shakespeare to express his feelings towards his mother, the Queen.

‘She was the pattern to all princes living,’ he said, a quote from Henry VIII used to describe Elizabeth I.

As Charles resumed his seat, those trumpeters struck up again and God Save The King rang out. It was the first time it had been sung in his presence. And let the record show, it was belted out in the most resounding fortissimo.