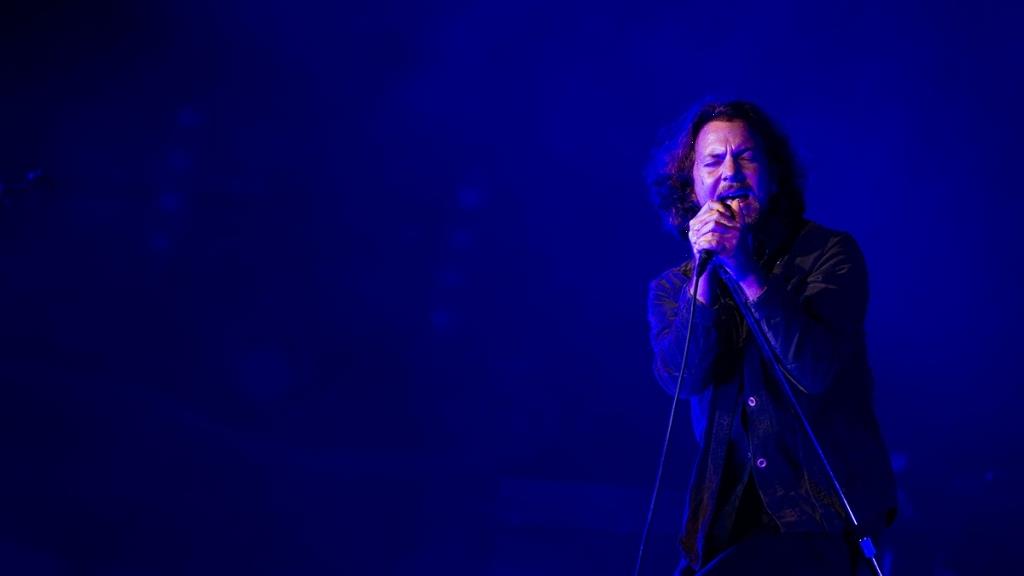 The Seattle Rock and Roll Hall of Famers made good Saturday night (Sept. 10) on a special show nearly two-and-a-half years in the making at the fabled Apollo Theater in Harlem, New York, navigating through a serious technical-related delay five songs into the set that took more than 15 minutes to correct.

The concert was broadcast live on Pearl Jam’s long-running SiriusXM channel as part of the network’s Small Stage series, and was open only to subscribers, contest winners and the usual coterie of VIPs. The 21-song performance blended classics such as “Porch,” “Even Flow” and “Better Man” with seven songs from the band’s latest album, “Gigaton,” plus a situation-appropriate dedication to Howard Stern, Robin Quivers and producer Gary Dell’Abate on “Spin the Black Circle.”

“I’m gonna admit — I’m a little shaky,” Vedder said at the outset, his hands wavering as if he was about to make his Broadway debut. “I’m feeling … energy. It’s a deep honor to play this venue.” He also saluted past Apollo performers such as Bessie Smith and Ray Charles (who he said once complimented him on his ‘80s-era mohawk), as well as the Red Hot Chili Peppers, who will play a Small Stage show here on Sept. 13 (joked Vedder: “30 years later and we’re still fuckin’ opening for them”).

The show began with the band seated for the early B-side “Footsteps,” followed by the rarities “Pendulum,” “Sleight of Hand” and “Parachutes,” the latter two played for the first time in six years. The PA dropped out a couple times during these initial moments, prompting a 10-minute break after “Hard to Imagine” to “reboot the computer … or reboot something,” Vedder said.

As the delay grew longer, Vedder walked to the front of the stage to ask for patience and proceeded to play Warren Zevon’s “Keep Me in Your Heart” on solo acoustic guitar, completely unamplified (Zevon died on Sept. 7, 2003). The band then exited for several more minutes before returning for the hard-rocking “Gigaton” opening track “Who Ever Said.”

Relatively fresh off a summer European tour and four shows into this North American leg, Pearl Jam was in top form on “Gigaton” songs such as “Quick Escape,” with its dazzling Mike McCready guitar solo, and the strident, Tom Petty-ish “Never Destination,” plus ‘90s rock staples such as “Do the Evolution.” The show wound down with a rousing cover of The Who’s “Baba O’Riley,” with Vedder smashing tambourines together and then flinging them into the audience, and closed with the hushed, tense “Indifference” from the 1993 album “Vs.”

The Apollo gig was a de facto warmup for Pearl Jam’s return to nearby Madison Square Garden on Sunday for the first time in more than six years.

The Small Stage show was originally scheduled for March 26, 2020, the day before the release of “Gigaton.” It and all other shows on Pearl Jam’s planned spring North American tour that year were postponed due to the COVID-19 pandemic, robbing devotees of the chance to see the band on its smallest New York-area stage since a 2006 performance at the 1,200-capacity Irving Plaza.

“It was definitely a formidable show, just because of the history of the place, and our reverence for that history,” Vedder said during a Pearl Jam Radio fan Q&A in September 2020. “The opportunity to play that stage, we did not take it lightly. For me, I think the band feels like we got tickets to that show. We were trying to schedule a Howard Stern interview, and I was excited about that as well. You know, play the Apollo, have a few drinks, sleep it off the next day, and then talk to Howard the next day. I was ready. He’s a great interviewer” (Vedder eventually made his debut appearance on Stern’s show two months later, hours before the 2020 presidential election).

The Small Stage series kicked off in August 2021 and has since featured performances by Coldplay, J. Cole, H.E.R., Ed Sheeran, Avril Lavigne and J Balvin, among others. Lady Gaga, U2, Bruce Springsteen and Paul McCartney have also previously performed for SiriusXM at the Apollo.