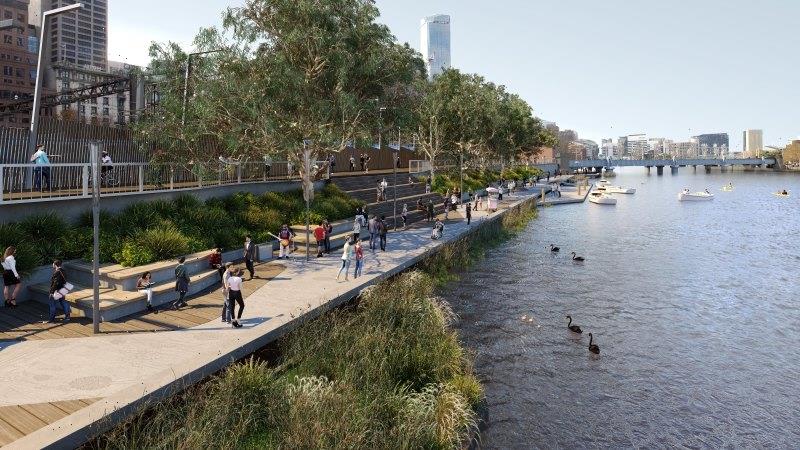 A landscape renewal project along the banks of the Yarra would deliver at least $3 of benefit for every dollar spent, but who will pay the $180 million shortfall to complete what Melbourne Lord Mayor Sally Capp has called her passion project remains a mystery.

The latest version of the Greenline – a four-kilometre promenade along the north side of the river from the Bolte Bridge to the Birrarung Marr park – is a scaled-down version of what Capp proposed before her election in 2018. 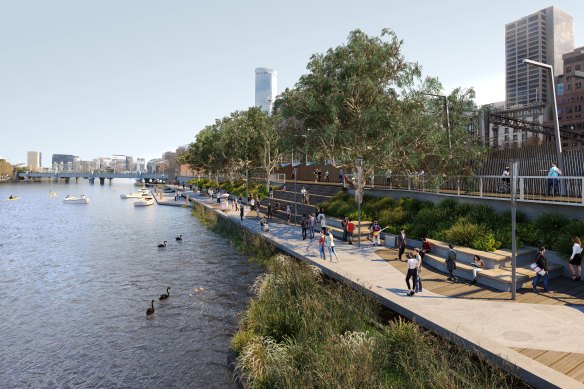 An artist’s impression of how Greenline might look near Flinders Street Station.

It was initially envisaged as a 10-kilometre trail linking Royal Park with Port Philip Bay through North Melbourne, Docklands, the CBD and Southbank Boulevard, with parkland built on huge decks above rail yards in the city.

But the vision has been scaled back to just four kilometres of uninterrupted green space and projects to improve the habitat and quality of the river water itself.

The business case report, prepared by consultancy firm Ernst & Young, says that the $300 million development would return $740 million in economic and community benefit to the state over the next two decades.

Melbourne City councillors will consider the business case and vote on whether to endorse it on Tuesday. It was released to the public on Friday, with the first stage of the project of installing “floating wetlands” in the Yarra to begin next year.

The business case also forecasts that the project would create 6400 extra jobs by 2042 and 3400 direct and indirect construction jobs.

Principal at consulting firm SGS Economics, Marcus Spiller, said the return on investment for the project was much higher than that of major tunnel and rail projects, which often return only $1.50 for every dollar spent.

“Even though it’s fairly expensive to build, compared to massive tunnels and land acquisition and building massive freeways, it’s a relatively modest cost, but you open up all sorts of wonderful opportunities to people” said Spiller.

The city council has set aside $140 million for the $300 million project already as part of its 2022–23 budget, including $20 million from the federal government.

The business case will be used to lobby the state government and other businesses to make up the $180 million shortfall.

The premier’s office was contacted for comment on any plans to fund the project on Friday but did not respond by deadline.

The business case presents councillors with three options; developing the Birrarung Marr end or the Bolte Bridge at a lower cost, or the entire four-kilometre stretch.

Independent Urban designer and architect Andy Fergus said completing the entire length was the most obvious benefit, as spot renewal projects of parks and walks along the stretch in the past had not made the north bank a pleasant place to visit. 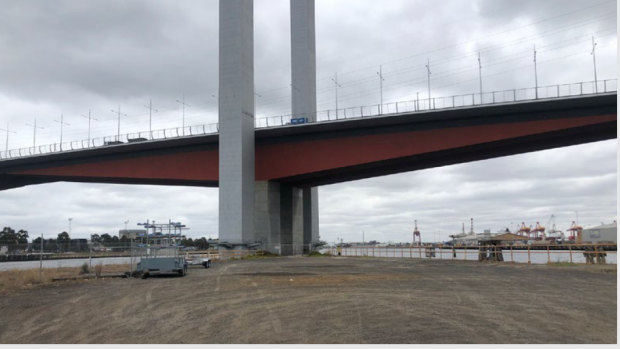 The current view of Bolte Bridge view from North Wharf. This area would become parkland under the “Greenline” plan.Credit:Melbourne City Council

“It’s been plagued by lots of tiny projects over the years, that have never amounted to continuous space,” he said.

Fergus did flag there were some missing elements in the business case that needed to be remedied, such as a plan for how to encourage people from the CBD to the riverbank as current underpasses around Flinders Street station were congested and uninviting.

He also noted the business case did not calculate the costs of not undertaking the project, including the costs of the river flooding as climate change impacts increased.

The Victorian Chamber of Commerce and Industry had criticised the project for a lack of a business case and Chief Executive Paul Guerra said on Friday the chamber was reviewing the document. 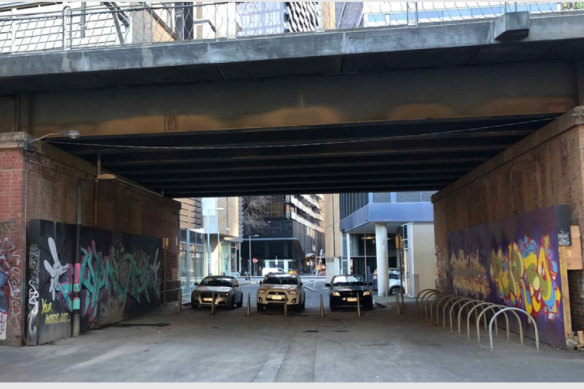 Land under the railway viaduct at Rebecca Walk would be redeveloped under the Greenline project.Credit:Melbourne City Council

But Rory Hyde, associate professor of architecture at Melbourne University, said the project “has greater value than merely economic” and that council ought to back such projects “because they are good, not because they make money”.

“What price can you put on returning life to the river? On a quiet place to sit? On birdsong? Or on placing Aboriginal culture at the centre of the city?,” he said.

Residents are encouraged to attend the Future Melbourne Committee meeting on Tuesday September 6 at 5.30pm. Questions must be submitted by 10am on the day.