Much like any other weekend, Keisha Green decided to unwind after a long work week with her friends in Atlanta. At the end of an evening filled with laughs and great company, Green hopped in her car and headed home. Unfortunately, this night would take a turn she would’ve never anticipated.

“We were involved in a very serious accident,” Green said, recounting the fateful night in 2013. “A guard rail came through the car and severed both my legs immediately,” she explained, which led to a double amputation right below the knee.

Unsurprisingly, this changed the course of her life forever.

At the time, the busy mother of two had built a booming hair extension store and laid plans to expand into a second brick-and-mortar location when her life was rocked. With her newly limited mobility, it became difficult to tend to herself and operate her businesses the way she always had.

“I was adamant about not allowing the amputation deter me from my goals,” Green said. “My mindset has never made room for self-imposed limitations, but unfortunately the world hadn’t caught up.”

Green said that after the accident, it became clear that most spaces weren’t ADA compliant, making it challenging for her to navigate, particularly in a hands-on field like e-commerce beauty. “I noticed I was falling behind on my shipments because I couldn’t find my way around as easily while in my chair,” she explained. “So, I started making accessibility accommodations and building a network of contacts that would help me do that all while growing my business.”

After some time, she was able to expand her beauty brand footprint into a hub for salon suites that housed stylists and other entrepreneurs. Along the way, she took note of what she learned and created a coaching program for aspiring business owners who were also amputees.

“I launched my platform, Legless Divas, because I know there’s a large group of Black women that underwent amputations, and knew no one else like them,” Green shared with Essence. “When I came from the hospital, I didn’t have a lot of the things that I needed to live my daily life. I didn’t have a shower bench. I didn’t have a bedside chair. I was unable to get through my bathroom doorway because of its construction. There were so many things that should have been done or looked at before returning home and this isn’t uncommon. These women needed advocates.”

Legless Divas is an inclusive support group that offers wrap-around services for amputees including one-on-one business coaching, health care resources, and access to an empowerment community of women.

Additionally, Green mentioned she’s aiming to share the stories of the women she’s met and helped along the way in a new podcast, Nothing Missing co-hosted with fellow amputee advocates. 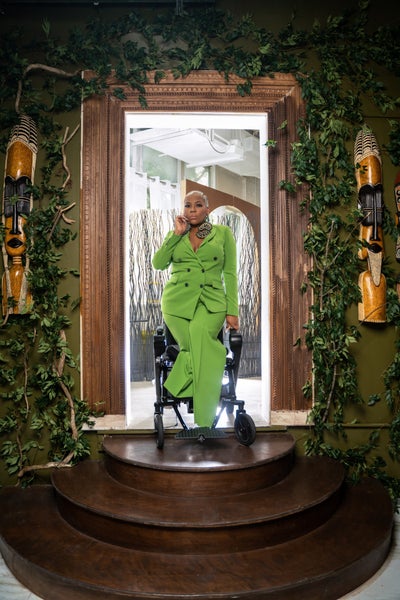 Additionally, Green mentioned she’s aiming to share the stories of the women she’s met and helped along the way in a new podcast, Nothing Missing co-hosted with fellow amputee advocates.

“In keeping with everything I’ve launched, this series will serve as an opportunity to champion the message that regardless of what people have labeled as a disability, we’ll always choose to focus on our many abilities. Despite our limbs having been removed, we’re missing nothing.”