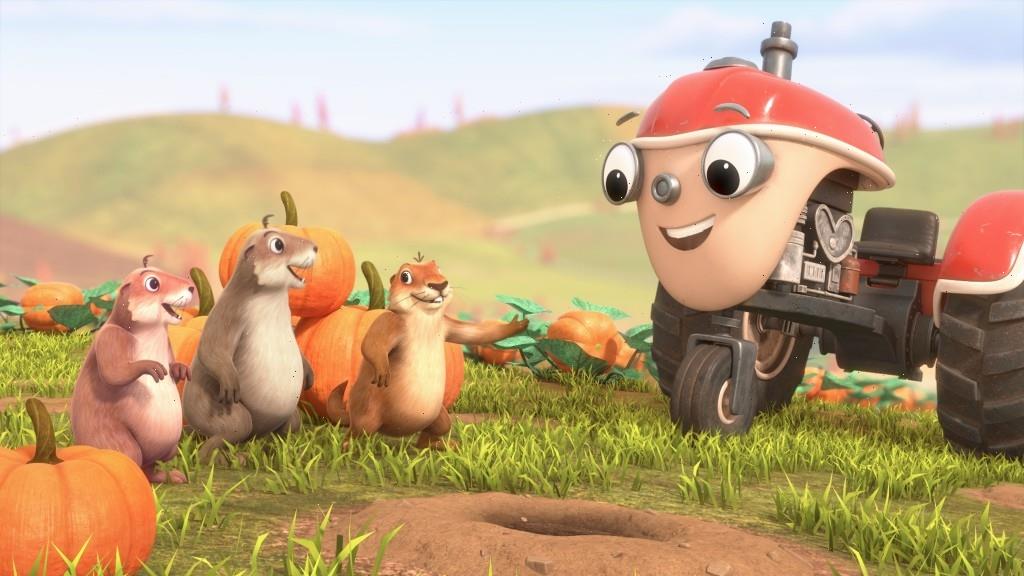 New original series coming to platform this autumn include “Sago Mini Friends,” an animated series based on characters from the Sago Mini World app; “Slumberkins,” a mixed media puppet / 2D animation program from the children’s emotional learning brand and produced by The Jim Henson Company; “Circuit Breakers” a futuristic anthology series that tackles kid-relatable issues through a sci-fi lens; and “Interrupting Chicken,” an animated preschool series which illuminates the joy of reading, writing, and storytelling, and stars the voice talents three-time Emmy Award winner Sterling K. Brown (“This Is Us,”).

Returning this fall iis the Emmy Award-winning series “Ghostwriter,” with an entirely new cast; animated adventure epic “Wolfboy and the Everything Factory”; friendship and farming tale “Get Rolling with Otis”; and Jack McBrayer’s music-forward “Hello, Jack! The Kindness Show.” 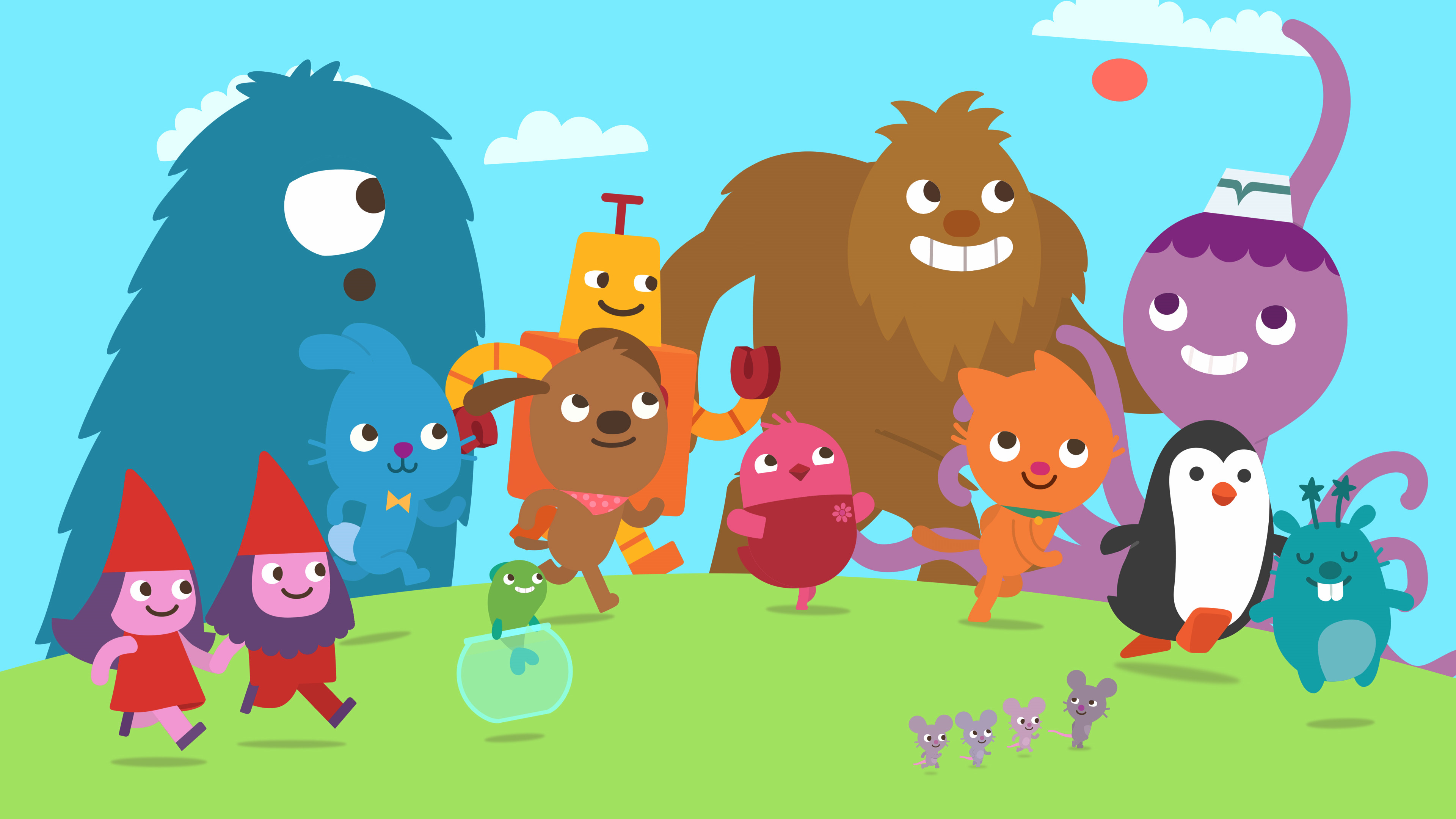 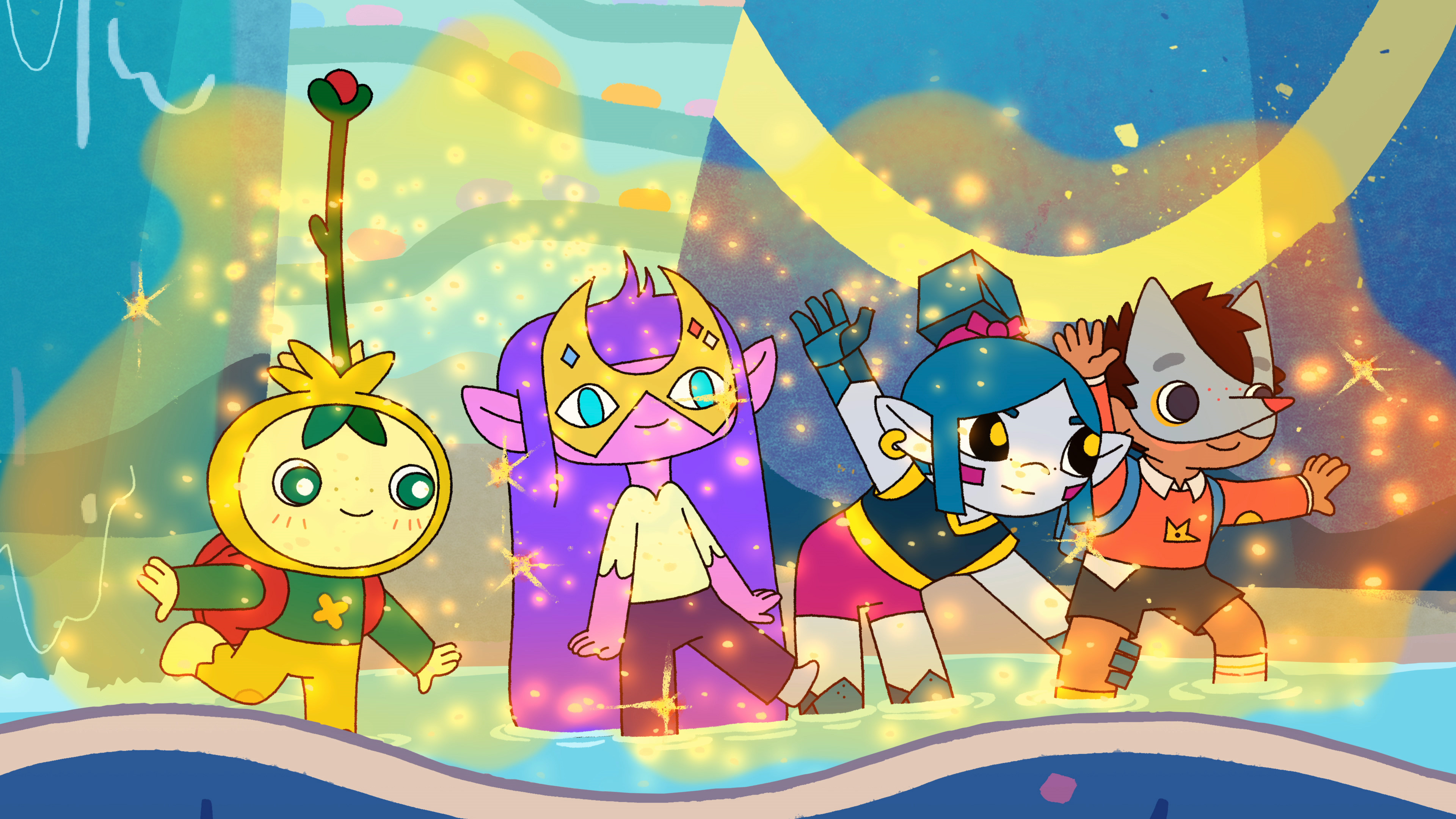 “Wolfboy and the Everything Factory” – Season Two – September 30

Inspired by the work of visual artist Toff Mazery, co-created by Emmy Award winner Edward Jesse (HITRECORD’s “Create Together”), developed by Emmy winner Michael Ryan (“All Hail King Julien,” “Kung Fu Panda”), and executive produced by Emmy winner Joseph Gordon-Levitt (“Mr. Corman”), HITRECORD and FOX Entertainment’s Bento Box Entertainment, the second season of the animated epic “Wolfboy and the Everything Factory” takes Wolfboy (voiced by Kassian Akhtar), to a new realm underneath the Everything Factory that is responsible for all of the destruction in the universe. With his Spryte friends and new allies, Wolfboy engages in a quest to unite the forces of creation and destruction, and realizes that being different is what makes him special – and ultimately, it’s the oddballs and dreamers who change the world. 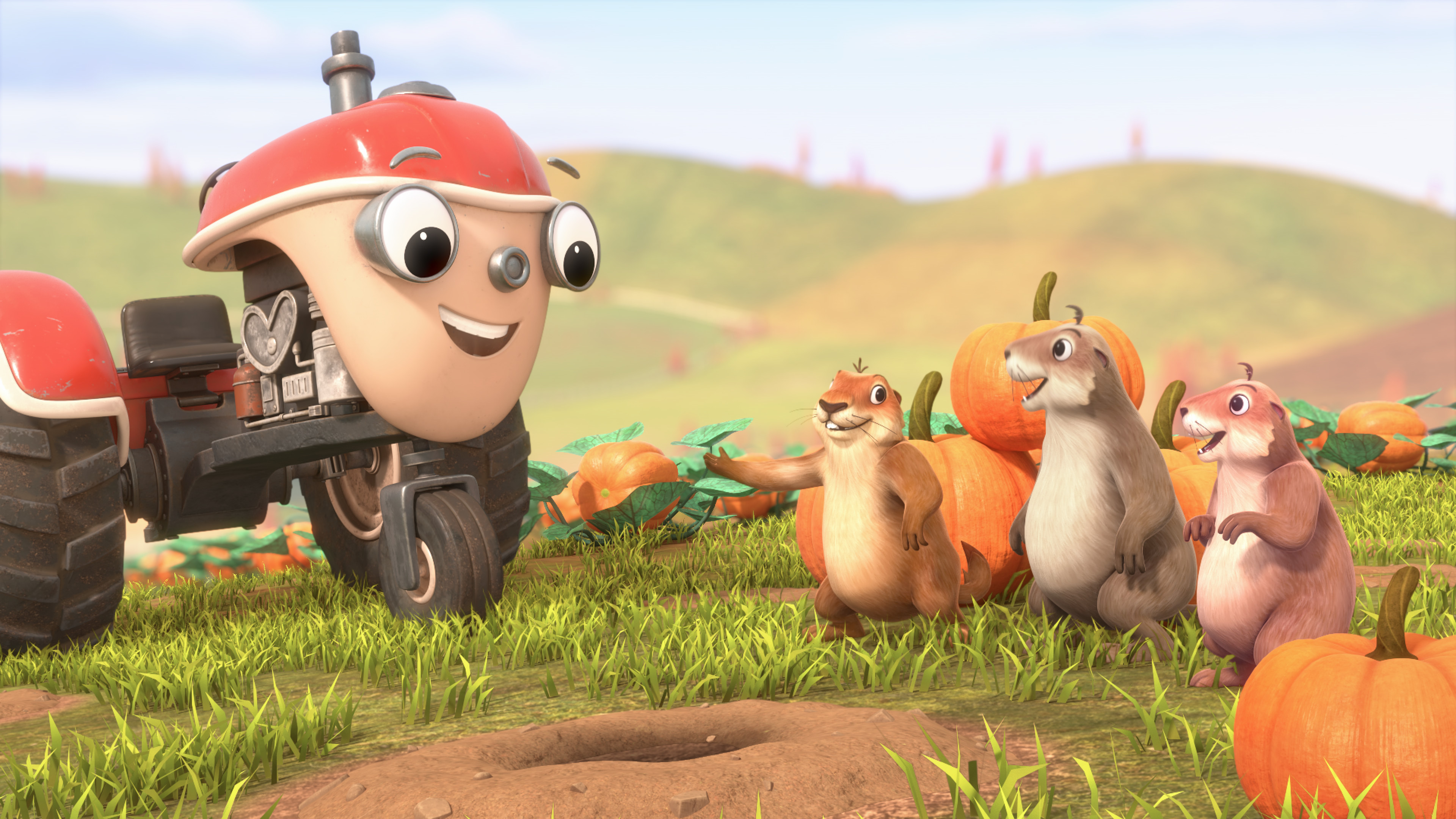 Based on the Penguin Random House book series by Loren Long, “Get Rolling With Otis” is an animated adventure series from 9 Story Media Group and Brown Bag Films welcoming young viewers to Long Hill Dairy Farm, home to Otis the tractor and all his friends. Otis may be little, but he has a big heart. Whenever he sees a friend in need, he hits the brakes, asks how they’re feeling, and rolls into action to help. The series is executive produced by Vince Commisso, Wendy Harris, author Long, Darragh O’Connell, Jane Startz and Angela C. Santomero. Dr. Michele Borba, educational psychologist, best-selling author, frequent media contributor on TODAY show, and an expert in parenting, bullying, and character development serves as the compassionate action expert on the series through Apple TV+’s changemakers initiative. 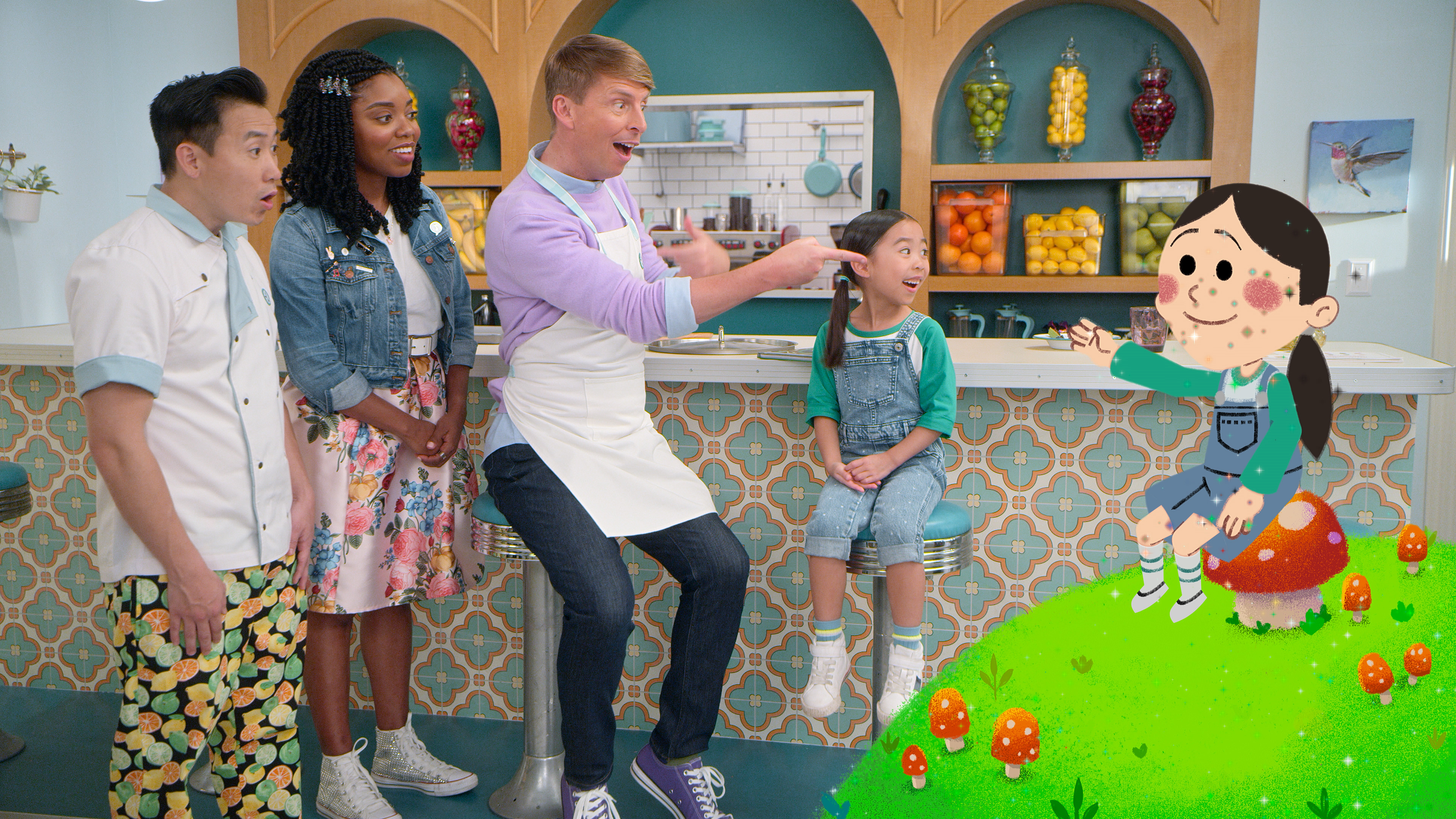 Jack is one of Clover Grove’s most thoughtful and caring residents, greeting everyone with kindness and humor. His ability to spread compassion, creativity, and imagination inspires everyone in town to do the same. A new season of kindness creates more incredible change. “Hello, Jack! The Kindness Show” is co-created and executive produced by Jack McBrayer (“30 Rock,” “Phineas and Ferb,” “Wreck-It Ralph” franchise) and Angela C. Santomero (“Blue’s Clues,” “Daniel Tiger’s Neighborhood”).

Emmy Award-winning “Ghostwriter” returns for a third season with an entirely new cast and a new adventure! When a ghost haunts a bookstore and releases fictional characters into the real world, a group of friends works to solve a mystery surrounding the ghost’s unfinished business. A reimagining of the 1992 hit series from Sesame Workshop, the modern-day “Ghostwriter” maintains a city-based, multicultural cast, inviting children ages 6-11 to see themselves on screen as they learn to appreciate a range of new and classic literature. Starring Princess Mapp (“Sydney to the Max,” “The Unicorn”), Nour Assaf (“The Casagrandes”), and Daire McLeod (“Danger Force”), the series was developed for television by J.J. Johnson and Andrew Orenstein with Academy Award winning and DGA Award-nominated Luke Matheny directing the first episode. Matheny and Orenstein executive produce alongside Johnson, Christin Simms, and Blair Powers for Sinking Ship Entertainment and Kay Wilson Stallings for Sesame Workshop. 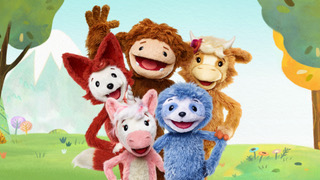 Embark on adventures with Bigfoot, Unicorn, Sloth, Yak, and Fox as they explore a world of feelings in this Jim Henson Company mixed media puppet / 2D animation series that empowers the emotional wellness of children through supportive storytelling. Based on the leading children’s emotional learning brand Slumberkins, the series brings to life some of the beloved characters from the Slumberkins books as they explore new stories of friendship, confidence, and connection to model healthy relationships. “Slumberkins” was created for television by Alex Rockwell (“Word Party,” “Pajanimals”). The Jim Henson Company’s Halle Stanford is executive producer along with Rockwell. Callie Christensen, MIT in Elementary Education and Special Education and Kelly Oriard, M.S. in Counseling and Marriage Therapy & School Counseling, creators of the Slumberkins education brand, are co-executive producers. Dr. Dan Siegel, executive director of the Mindsight Institute and clinical professor of Psychiatry at the UCLA School of Medicine and the founding co-director of the Mindful Awareness Research Center at UCLA, and author of multiple New York Times bestsellers, serves as an expert in understanding how attachment experiences affect behavior through the Apple TV+ changemaker initiative. 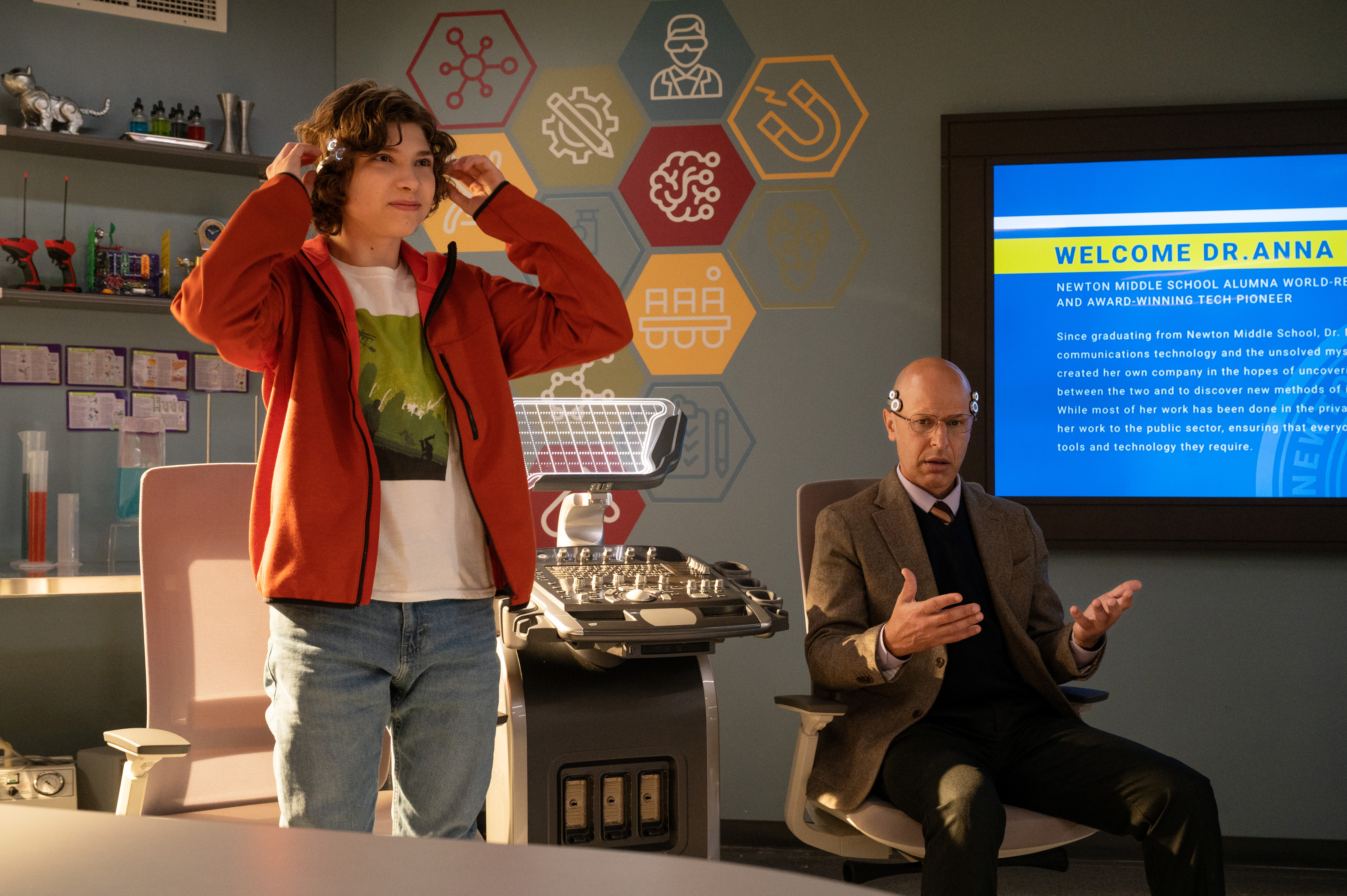 “Circuit Breakers” is a half-hour futuristic anthology series that tackles kid-relatable issues through a sci-fi lens. But not everything is as it seems, and their curiosity leads to chaos. The series was created by Melody Fox with executive producer Matt Hastings directing the pilot episode. “Circuit Breakers” is executive produced by Andrew Orenstein, Cottonwood Media’s Sarah Haasz, David Michel and Cécile Lauritano, Aircraft Pictures’ Anthony Leo and Andrew Rosen, and Todd Berger. 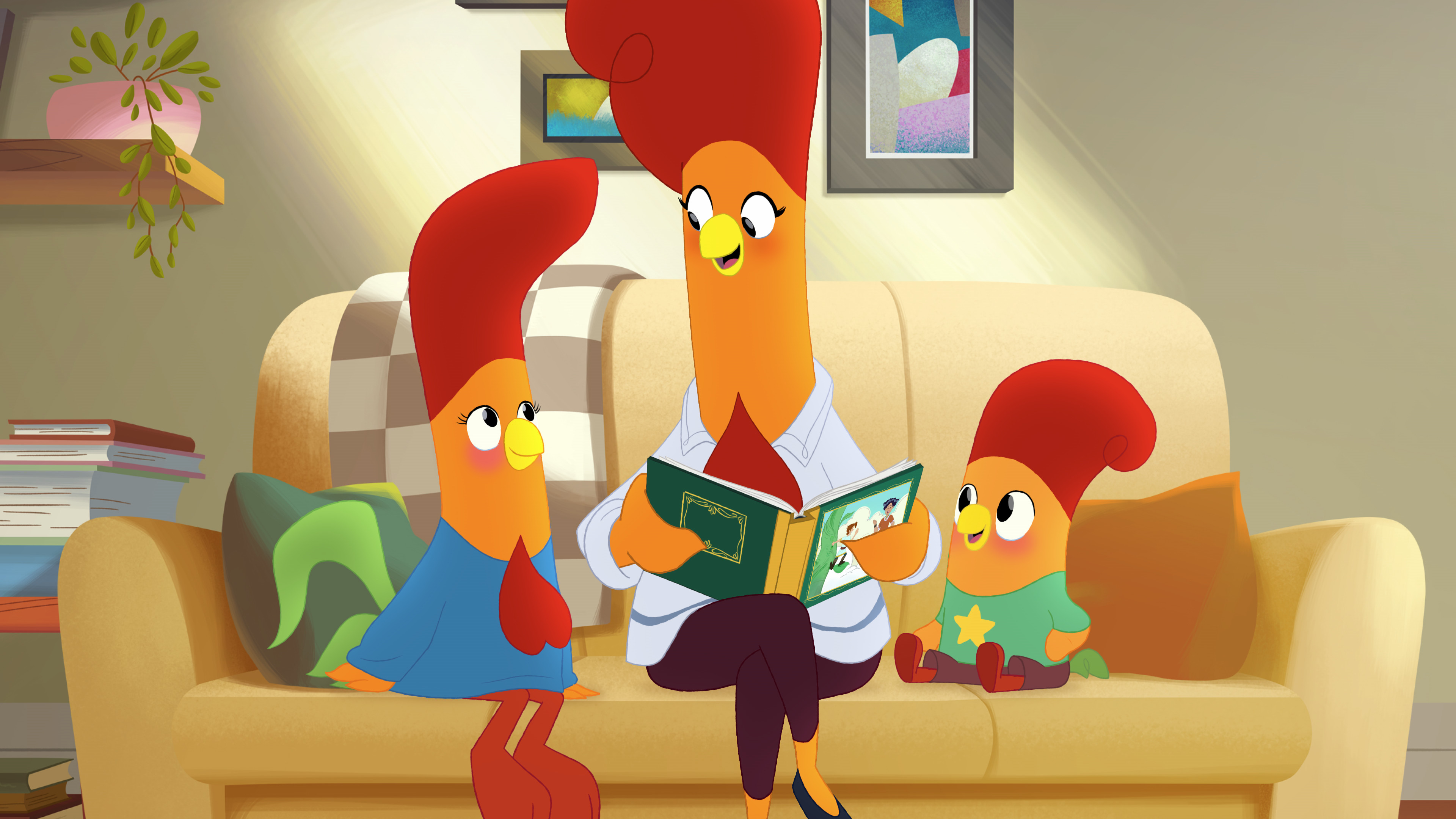 This animated preschool series based upon the 2011 Caldecott Honor-winning book series written and illustrated by David Ezra Stein “Interrupting Chicken” introduces children to the joy of creative writing – starting with a young little chicken named Piper who has a habit of interrupting storytime. Every time Piper hears a story, she can’t help but jump in, ask questions, and let her imagination run wild as she tries to fill in details, guess what happens next, or insert herself in the middle of the action to help save the day. “Interrupting Chicken” was developed by Emmy Award winner Ron Holsey who serves as executive producer. In partnership with Mercury Filmworks, the series stars the voice talents of three time Emmy Award winner Sterling K. Brown (“This Is Us,” “Honk for Jesus. Save Your Soul”) and is executive produced by Holsey, Stein, Loris Kramer Lunsford, Clint Eland and Chantal Ling. Dr. Lucy Calkins, Founding Director of the Teachers College Reading and Writing Project and the Richard Robinson Professor of Children’s Literature at Teachers College, Columbia University, serves as our reading and writing expert through the Apple TV+ changemaker initiative.

The slate of original series and film for kids and families on Apple TV+ includes the recently premiered “El Deafo,” “Amber Brown,” “Best Foot Forward,” “Lovely Little Farm,” “Duck & Goose,” “Pinecone & Pony,” “Fraggle Rock: Back to the Rock” and “Harriet the Spy” from The Jim Henson Company, and the animated adventure film “Luck” from Apple Original Films and Skydance Animation;

Also, Peabody Award-winning series “Stillwater”; Daytime Emmy Award-winning “Ghostwriter,” and “Helpsters” from Sesame Workshop; Academy Award-nominated animated film “Wolfwalkers”; “Hello, Jack! The Kindness Show” from Jack McBrayer and Angela C. Santomero; “Wolfboy and the Everything Factory” from Joseph Gordon-Levitt, HITRECORD and Bento Box Entertainment; “Get Rolling with Otis” and “Puppy Place”; new series and specials from Peanuts and WildBrain including “Snoopy in Space” season two, “It’s the Small Things, Charlie Brown,” and “For Auld Lang Syne”; and “Here We Are: Notes for Living on Planet Earth,” the Daytime Emmy Award-winning television event based on the New York Times best-selling book and TIME Best Book of the Year by Oliver Jeffers.