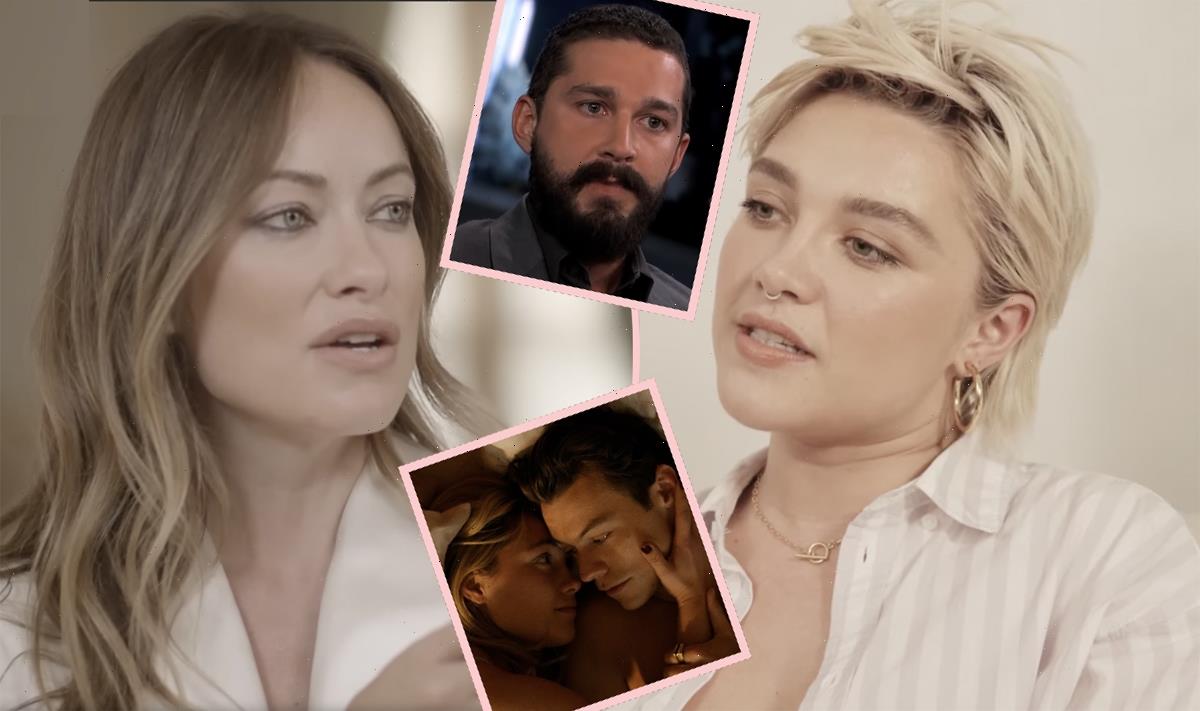 Whoa! If you were expecting Olivia Wilde and Florence Pugh to put whatever beef they have aside to promote their new movie together, you can forget about it!

As we’ve been following, there’s been an unspoken friction between the stars for the past few months. Last month fans noticed Florence wasn’t being her exuberant self when it came to promoting Don’t Worry Darling, the sexy thriller she stars in with Harry Styles, due to hit theaters in just four weeks. She didn’t share the trailer like she did with all her other projects, she wasn’t posting about it at all, perhaps most notably she didn’t respond when Olivia shouted her out on Instagram. Speculation was pretty quick there was an issue between the Black Widow star and her director. That was NOT helped by the fact Florence declined to be part of Olivia’s big Variety cover piece this week.

What’s the feud all about? We’ll get back to that in a bit… It just got more complicated…

For now, the latest evidence. It turns out Florence will be doing basically ZERO press for the movie. Nada. Three studio execs and an unnamed source close to the Midsommar star spilled to The Wrap — she’ll do the red carpet for the premiere at the Venice Film Festival, but that’s it! One exec confirmed to the outlet:

“She’ll be doing greetings for us from the set of ‘Dune’ because she’s not doing press.”

For those who don’t understand what a big deal this is, we’ll try to explain. Press isn’t just going to Comic-Con or eating hot wings or having to pretend you like Jimmy Fallon. There’s also those press junkets where movie stars sit in a hotel room all day while the studio wheels in entertainment reporters one after the other for 5-minute interviews. You know, the kind where they all ask the same questions. Actors HATE them. It’s what most consider the worst part of the job, and it results in a lot of actors getting in trouble by eventually saying the wrong thing, getting frustrated, even occasionally storming out. Just about every movie star in the world would choose not to do them if they didn’t have to. But they do have to. It’s a contractual obligation to the studio; it’s part of their job to sell the movie. It doesn’t matter if you’re Jennifer Lopez or Denzel Washington, you’re doing press.

Florence got out of doing that for this movie. That’s how important this was to her. It’s a BIG FREAKIN’ DEAL.

The studio exec claims it’s because of her schedule filming Dune: Part Two, but again — that has NEVER stopped actors from having to plug their movies. Both films are Warner Bros; we promise you, they would have found her the time in her filming schedule. No, this seems to us to be yet another example of Florence ghosting Olivia and her movie.

OK, so back to the question of why! What started this feud? Where’s the beef??

We heard some inside info explaining the feud a couple weeks back. A source told Page Six that Florence was made uncomfortable by Olivia’s relationship with her male lead. This insider claimed the Tron: Legacy star was straight-up cheating on Jason Sudeikis with Harry, which was made even more awkward by the fact the Ted Lasso star was visiting the set with their children:

“I can tell you for a fact that Flo seeing Olivia and Harry all over each other on set did not go down well as Olivia was still with Jason when she first hooked up with Harry.”

If that’s true, it’s possible Florence felt like she and the rest of the cast and crew were being turned into unwitting accomplices as they suddenly had to keep the secret of an extramarital affair. But there’s more…

As you may have heard, Shia LaBeouf didn’t take too kindly to Olivia once again bringing up how she (supposedly) fired him from the movie. You know the story: he apparently made some of the cast, including Florence, uncomfortable with his behavior. It certainly wouldn’t be the first time. Even before the abuse allegations, we learned he was so method he refused to shower and had a tooth pulled unnecessarily for a role. More recently, FKA twigs claimed he told her he murdered some stray dogs to get into character as a hitman. Disgusting. But it made sense that he was being difficult, right?

Speaking of FKA, it was right after the singer’s shocking lawsuit alleging sexual abuse that we first learned Olivia had “fired” Shia for bad behavior, with sources citing the director’s “zero a**hole policy.” It really made her look like she was keeping her cast safe from his nonsense. She even talked at length about it later.

Shia now claims he actually left the project over a conflict over what he thought wasn’t enough rehearsal time, writing in an open letter to Olivia, published in Variety on Thursday:

“I am a little confused about the narrative that I was fired, however. You and I both know the reasons for my exit. I quit your film because your actors & I couldn’t find time to rehearse.”

While we’re loathe to take Shia’s side here, the man brought the receipts! He released a video message in which Olivia very clearly BEGS HIM TO RECONSIDER AND COME BACK TO THE FILM!

In that video, she refers to Florence rather dismissively as “Miss Flo”, saying:

“You know, I think this might be a bit of a wake-up call for Miss Flo, and I want to know if you’re open to giving this a shot with me, with us. If she really commits, if she really puts her mind and heart into it at this point and if you guys can make peace — and I respect your point of view, I respect hers — but if you guys can do it, what do you think? Is there hope? Will you let me know?”

Does it sound like she’s taking Shia’s side on some kind of dispute here? Because if so, whoa!

Maybe Florence’s problems with Olivia extend way outside some rumored discomfort with infidelity — because it seems like there’s plenty of duplicity to go around here!

What do YOU think? Florence definitely seems upset with Olivia — but why?? Let us know your thoughts in the comments (below)!