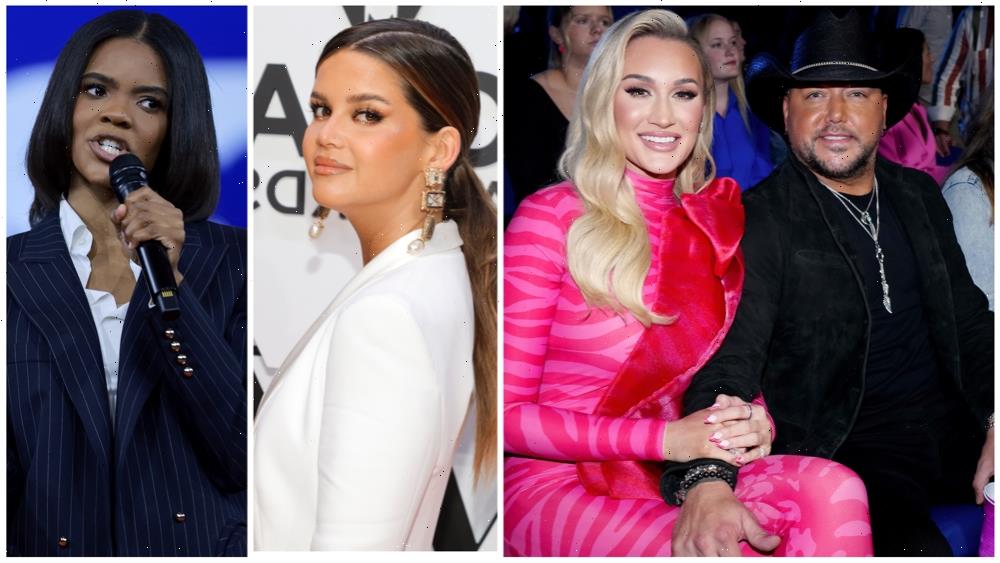 Country superstar Jason Aldean and his wife Brittany Aldean have become increasingly outspoken as conservative activists, without too much commentary or pushback from more centrist or liberal-leaning country stars. But when Brittany Aldean posted what many viewed as a transphobic joke to her Instagram account, Cassadee Pope and then Maren Morris jumped in defend the LGBTQ+ community — which then led to a war of words with another conservative Nashville celebrity, Candace Owens.

The exchanges got contentious enough that Morris said, presumably addressing Brittany Aldean: “It’s so easy to, like, not be a scumbag human? Sell your clip-ins and zip it, Insurrection Barbie.” Responded Brittany: “Karen Morris, thanks for calling me Barbie,” sealed with a kiss emoji.

The fracas began with Brittany Aldean posting an Instagram video of herself glamming herself in the makeup chair, laughing, with a supposedly jocular caption: “I’d really like to thank my parents for not changing my gender when I went through my tomboy phase. I love this girly life.” (The soundtrack to the video, ironically, was “Upgrade U,” a song by the highly trans-supportive Beyonce.)

Although the comment was quickly picked up and tweeted out by some more liberal country fans as offensive, on Aldean’s IG account, where comments are limited, it picked up plenty of positive comments from supporters that clearly viewed the joke as political, like Donald Trump’s daughter-in-law Lara Trump, as well as right-wing beauty influencer Amanda Ensing, country singer RaeLyn and the wives of country singers Jon Pardi, Chuck Wicks and Granger Smith.

But Pope was not having it. Without naming or tagging the Aldeans, she tweeted: “You’d think celebs with beauty brands would see the positives in including LGBTQ+ people in their messaging. But instead here we are, hearing someone compare their ‘tomboy phase’ to someone wanting to transition. Real nice.”

Morris then replied with her support for Pope’s views. That’s when Owens, the conservative activist and talk show host who moved to Nashville a few years ago, jumped in, writing to Morris: “It’s easier to not castrate your children. But I guess whatever helps sell bad records.”

“Oh my god, not you,” Morris replied to Owens. “My Grammy is positively sobbing right now. Also, why do y’all always go to ‘castration’ and ‘pedophiles’ to try and shut an argument down? It’s honestly concerning and worth looking into.” Owens ramped up her counterattack, quoting back the Grammy remark and responding: “You sound like a 15-year-old girl on Tik-Tok. You are in your 30s. Grow up.” And: “When you chop a penis off, it is the literal definition of castration… Also, I said groomers — not pedophiles. Got something else on your mind you want to share with the class, sicko?”

Although most mainstream country performers stayed out of the argument, artists from other genres did speak up as well, like Joy Oladokun, a Black, gay Americana artist who has performed at the Grand Ole Opry. “Waking up happy that my parents didn’t raise me to be as rude and nasty as Brittany Aldean,” Oladokun posted, flashing a peace sign and adding, “I also would like to say the LGBTQs have clearer skin without whatever she pushin’.”

This isn’t the first time the Aldeans have riled up non-rightward-leaning segments of the country community. On top of their Trump support, Jason Aldean all but declared his concerts mask-free zones as the pandemic began to wane, and the couple developed a clothing line that had their young children modeling “Hidin’ From Biden” shirts.

Morris referenced the Aldean’s politicized kids’ clothing line in a response to an IG post of Pope’s. “You know, I’m glad she didn’t become a boy either because we really don’t need another asshole dude in the world,” Morris wrote. “Sucks when Karens try to hide their homophobia/transphobia behind their ‘protectiveness of the children.’ Weren’t they putting their kids in ‘Biden-is-a-pedo’ shirts on social media? Sounds like a real safe way to protect them from millions of eyes! Fuck all the way off to Insurrection Barbie and the fellow IB’s trolling this comment section with their hypocritical, hateful asses.”

Other country stars lined up to add their likes or supportive comments to Pope’s and Morris’ posts, including Mickey Guyton, Meghan Linsey and top manager Jason Owen.

Pope’s latest IG post had her smiling in front of a London backdrop and writing: “POV: Knowing you got under someone’s skin you don’t like in the first place.”

Needless to say, perhaps, the only thing you’re less likely to see than a mask at a Jason Aldean show coming up is a rainbow flag.