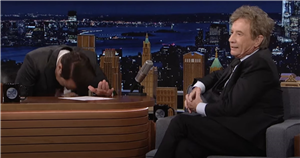 Martin Short is learning the hard way that ink is permanent but love is sometimes not. The iconic actor and “Only Murders in the Building” star appeared on “The Tonight Show” on Aug. 18 and kept Jimmy Fallon laughing the entire interview, rolling out a quip a second.

The 72-year-old began the segment by teasing his host (“James Thomas Fallon, your name screams out diversity, it really does,” he poked), before turning the jabs on himself. Short joked he was “so excited to be here tonight,” but noted that “could be the Vicodin or Xanax talking.” His facial expressions weren’t any indication, though, he teased, because “the Botox is fresh.”

When Fallon asked Short how his summer was going, the veteran comedian replied, “Well, it’s so beautiful. I’ve been up with the loons at my cottage. And do I regret my ‘Kim and Pete Forever’ tattoo? Sure.” Of course, it’s unlikely Short actually has a tattoo commemorating the nine-month romance of Kim Kardashian and Pete Davidson, though the young actor certainly has a lot of ink documenting the ill-fated relationship.

Short, of course, talked about his hit Hulu series, which is nominated for an impressive 17 Emmys for its first season, alone, at the 2022 ceremony in September. Short and his costar and frequent collaborator Steve Martin are both up for outstanding lead actor in a comedy series for their roles. Joking of Martin, 77, Short said, “He butt-dialed me the other day, which is kind of remarkable because he still has a rotary phone.”