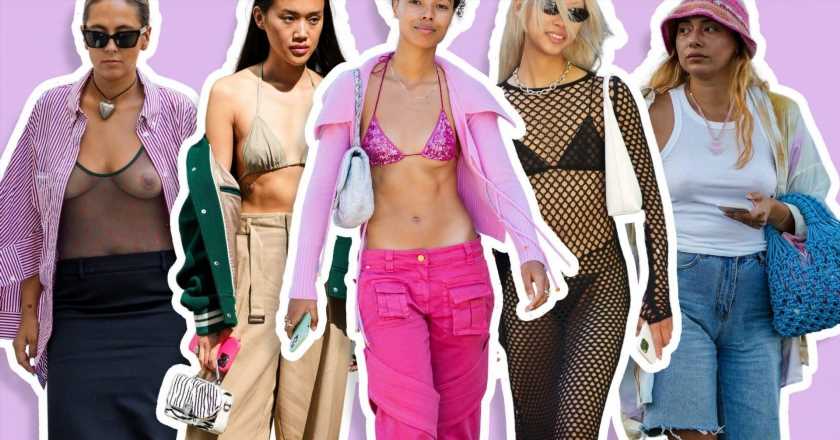 Written by Naomi May

The bra – in all of its supportive glory – looks set to be relegated once and for all next year, as the style set begins shunning it in favour of… well, see for yourself.

A certain conversation started earlier this year about Florence Pugh and her decision to go braless in a (totally delightful) sheer Valentino dress. The comments on Pugh’s Instagram feed – which she later addressed in a follow-up post – included a selection that referred to her “tiny tits” and suggested that she really ought to be “embarrassed” by being so “flat-chested”.

Aside from a wide swathe of society who ought to know that they should refrain from discussing other people’s bodies, Pugh’s decision to go braless reminded many of us how sexualised and maligned breasts continue to be, particularly in fashion. “Why are you so scared of breasts? Small? Large? Left? Right? Only one? Maybe none? What. Is. So. Terrifying,” Pugh wrote in the post, which has now been liked more than 2.4 million times.

Which is why when Copenhagen Fashion Week – argued by many style insiders to be the most agenda-setting and innovative of all of them – rolled around last week, it came as a welcome breath of fresh fashion air that seemingly everybody had done away with their bras.

The bra was rendered obsolete at Copenhagen Fashion Week SS23.

For the street style set, who have been responsible for the cementing of stomper boots, prairie dresses and indeed Ganni itself at the fashion fore, bras were relegated good and proper and, in their place, came the framing of their chests in all manner of sheer and flesh-flashing materials – similar to the sort that Pugh embraced. The result was the freeing of the nipple and the redundancy of the bra en masse.

Of course, it’s not all bad news for the bra. There were those who didn’t free the whole nipple and instead shunned their top half’s undie in favour of a triangle bikini top. On the streets, Oséree’s shimmering sequin bikini tops were commonplace, worn with slouchy XXL trousers (Y2K Christina, eat your heart out) and the rise of the bikini top as outerwear transcended social media catnip and elbowed its way onto the runways, chest first of course.

At Saks Potts’s spring/summer 2023 show in Copenhagen’s Kongens Nytorv, midriff-covering tops were replaced in favour of skimpy gold lamé bikinis, which clad bodies of all shapes and sizes. Baum und Pferdgarten’s collection similarly ripped up the rulebook (and the material of the top itself) and sent models down the runway wearing nautical-striped bikini tops, which peeked out underneath a heavy navy lumberjacket and coordinating trousers. It was a high-low peep show of the highest regard.

Bras were also rendered obsolete by Jade Cropper, the Swedish designer who made her runway debut in the Danish capital earlier this year with her first autumn/winter 2022 collection. The Stockholm-based designer mummified models in sheer materials without bras, which contrasted magically against the floor-sweeping gravity of their hems. It’s unsurprising that Cropper, one of the buzziest names on the Danish schedule, noted before the show that she had grown “tired of perfection”. Haven’t we all? Isn’t it time to finally rid ourselves of the very undergarments that play like putty into the patriarchy’s hand?

Twinkling and shimmering bikinis have taken the place once filled by bras.

For many, the death of the bra will be heralded as one step forward; for others – and not exclusively those with larger busts – it could very well pose something of a sartorial and health hazard. The diktat from the style set is that it’s your body and you should dress it, or indeed undress it, just the way you want. Should you be looking to employ the assistance of a more supportive bikini top, Form & Fold is the breakout swimwear label of this summer, which crafts covetable bikinis in cup sizes D and above.

The takeaway is about shedding the perfection and embracing the bold – fearless and, indeed, braless.