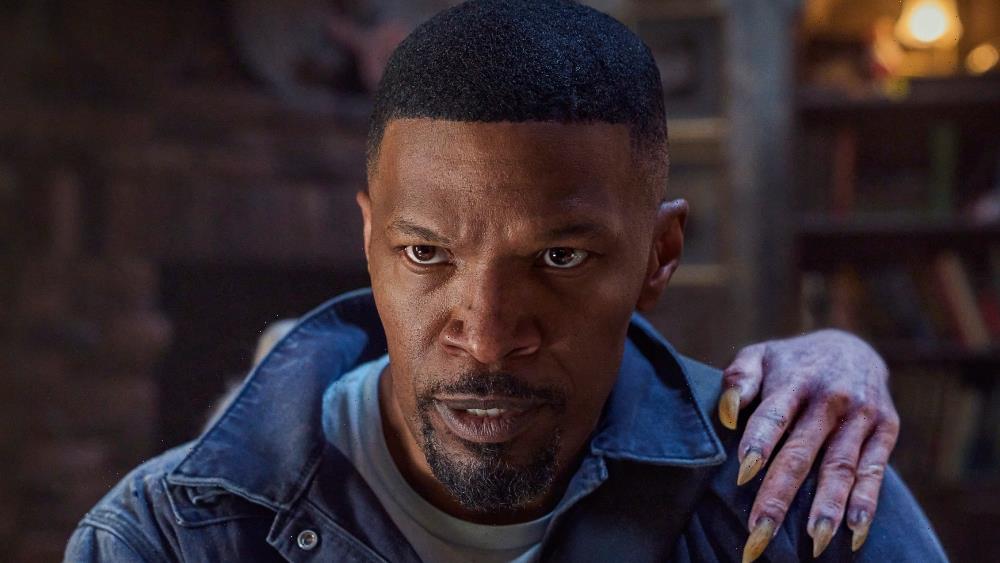 “Day Shift” is a vampire thriller stuffed with lock-and-load ultraviolence, starring Jamie Foxx in imperious badass mode. At heart, though, it’s a knowingly eccentric goof of a movie, to the point that it’s hard, for a while, not to find it agreeable, even as you register what a preposterous piece of fluff it is. Unfortunately, it’s also an arduous piece of fluff. It’s full of blow-you-away action scenes, and it’s also full of rules — a satirical vampire cosmology that’s fun until it starts to be just convoluted enough to give you a headache, especially when the rules are applied as inconsistently as they are here. Directed and co-written by J.J. Perry, “Day Shift” wants to be a dessert drenched in blood. That gives it flavor but also weighs it down.

Foxx plays Bud Jablonski, a Los Angeles vampire hunter whose day job is driving around in an ancient pick-up truck to clean and service swimming pools in the San Fernando Valley. Bud’s one and only goal is to get his hands on $10,000, which he needs to pay for the braces and grade-school tuition of his 8-year-old daughter, Paige (Zion Broadnax). (If he doesn’t have the money by Monday, his ex-wife, played by Meagan Good, will move the kid to Florida.) He plans to get the cash by selling vampire fangs, which, once extracted, can be quite valuable, depending on which bloodsucker they come from.

Sounds simple, right? But “Day Shift,” which is at once an undead action movie, a cheeky good cop/crazy cop buddy comedy, and the tale of a tough but saintly divorced dad out to save his family, is one of the more perversely twisty vampire flicks in recent memory. There are, in this movie, five types of vampires, organized by age: Southern, Eastern, Spider, Uber, and Juvenile. Got it? Don’t worry if you don’t, because none of it comes to much.

How do you kill the vamps? By blasting them through the heart with special African hard wood, then cutting their heads off with a silver blade. There’s a black-market sunblock that allows the vamps to be out in the SoCal daylight for maybe 20 minutes. (That doesn’t come to much either.) And once they’re killed, they release a special gas that you’ve got to get off you. Foxx has a special orange-yellow powder to use in the shower for that. Important rule: Don’t let the powder get in your butthole!

That the vampires are killed by decapitation is the closest the film comes to having an inviolable law (sort of like “Kill the brain and you kill the ghoul”). Until, that is, a key vampire gets decapitated only to place his head right back on himself, like something out of “An American Werewolf in London.” There are also vamps who are loyal to humans rather than other vampires. Why even ask why?

“Day Shift” is the sort of movie where Bud enters a suburban house, and there are two teenagers playing video games (they’re juvie vamps), and after they get blown away, Bud realizes that the house is a vampire hive, at which point one of the vampire-hunter brothers he has hooked up with announces, “Showtime, bro!” Cue the vampire extras in pale makeup and what look like costume-shop fangs bursting through doors, dropping through ceilings, and clawing through walls to become instant ballistic fodder. The vampire combat scenes aren’t particularly suspenseful, because they all come down to the same thing: The gun blasts send the vamps hurtling backward, but they instantly repair and continue to come at you — spinning and doing spider-walks, attacking in a contorted frenzy. Until, that is, you can chop the head off, which this movie does with an abandon that becomes numbing.

The chief baddie is a glamorous vampire real-estate agent, Audrey (Karla Souza), who is out to colonize the Valley by setting up the houses there as vampire hives. Unfortunately for her, Foxx’s Bud is a military veteran who’s totally mercenary about vampire killing, fiercely cut-and-dried in his action mega-moves. His vampire-hunter-as-working-stiff vibe is tied to the film’s flakiest and, in a way, most original element. In L.A., it seems that there’s a union of vampire hunters — literally a workers’ union, like the Teamsters. Bud used to belong to it but was kicked out for violating so many regulations. But his legendary mentor, Big John (Snoop Dogg), has the clout to get Bud reinstated.

Once you’re in the union, you can sell vampire fangs for much more money. But to do so, Bud has to agree to go on the hunt with Seth (Dave Franco), a desk jockey who’s there to make sure he doesn’t violate any union codes. He’s like the rookie cop assigned to ride with the reckless veteran trasher of protocol, only in this case the newbie is a geek full of terror who keeps pissing his pants.

Jamie Foxx is such a good actor that he gives even a skewed product like this one the benefit of his quick-cut retorts and genre-hero mystique. But “Day Shift,” instead of becoming more invested in Bud’s situation, starts to leave the human story on the back burner. It turns into a free-for-all around the time that Big John shows up with a circular machine gun, which fires rounds with such a punishing show of velocity and force that after he rips through a roomful of vampires, it takes a moment for us to realize that they should all still be alive since none of them was decapitated. By then, it’s the movie that has lost its head.