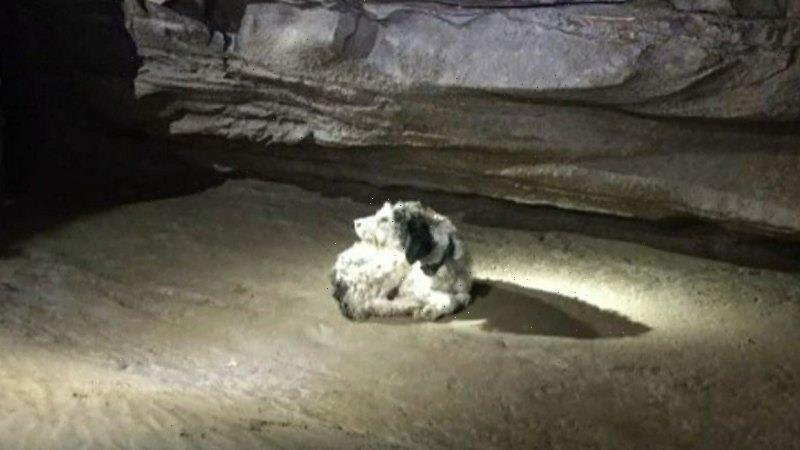 Gerry Keene was 500 feet (150 metres) underground on a cave exploration adventure in Missouri when his headlamp shone on something he’d never seen this deep in a cave: a dog.

She was skinny with matted fur and had curled up on a slab of cold rock, too weak to wag her tail or whimper.

Keene had seen fish, frogs and other small amphibians on his previous trips underground, but the last thing he expected to see was a dog. There was no telling how long she had been stuck down there. 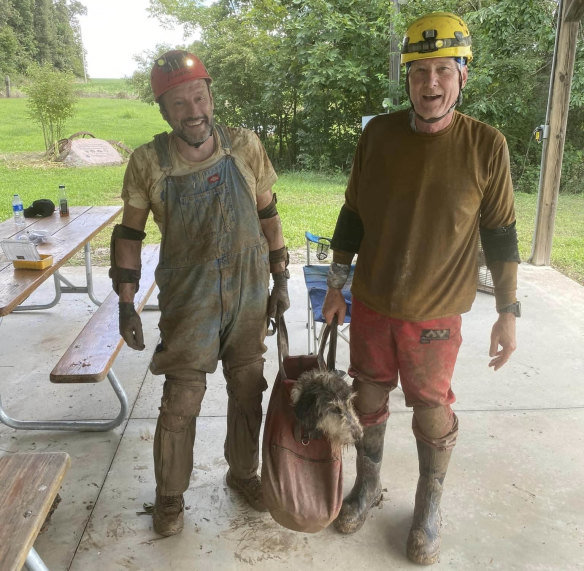 Gerry Keene, left, and Rick Haley with Abby after they rescued her from a Missouri cave.Credit:Rick Haley

“We realised it would be hard to get her out because she was too weak to walk,” said Keene, 59, who was on a spelunking trip in Perryville, Missouri, on Saturday with a small group that included several children.

He snapped a photo of the dog, then headed out of the cave to call for help from emergency responders.

At the same time as an assistant fire chief arrived, Rick Haley, a caving enthusiast who happened to be nearby, overheard that a dog was found inside the cave and needed rescuing. He volunteered to venture back into the darkness with Keene and help bring out the pup.

“There’s no telling how long she’d been down there, but we knew we had to get her out,” said Haley, who had just been surveying 2000 feet of passageways in the Tom Moore Cave system for the Cave Research Foundation.

Haley and Keene decided the only way to rescue the wounded dog was to go back down and carry her up.

“If we didn’t get her out, she would die in there,” said Haley, 66, a caver with 30 years of experience. “It would be a tough, vertical climb to get her out. But we were up for it.” 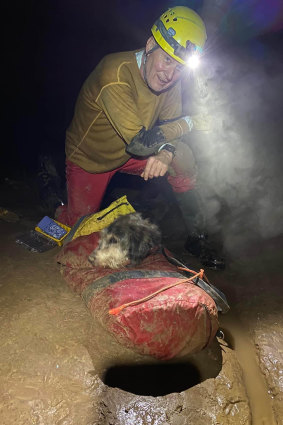 Rick Haley with Abby during her rescue.Credit:Gerry Keene

Before Keene went back into the cave with Haley, he showed the photo of the dog to residents who lived near the cave. One of them recognised her as Abby, a neighbour’s mixed-breed poodle who had gone missing June 9.

Haley and Keene speculated she might have chased an animal into the cave or was perhaps swept inside during a flash flood.

Knowing that someone was looking for her gave them even more motivation to go back in and get her.

They walked and crawled for about 15 minutes until they reached Abby, but it took them more than an hour to carefully haul her through low and narrow tunnels to the surface in a padded duffel bag, Haley said. The exhausted pooch’s head poked out of the top.

“We had to move her hand over hand because it was pretty tight and vertical coming out,” Haley said, noting that at one point he and Keene had to slither through mud in a long corkscrew tunnel.

“It was tiring because it was the fourth trip through the cave that day,” Keene said. “But we just took it slow and easy.” 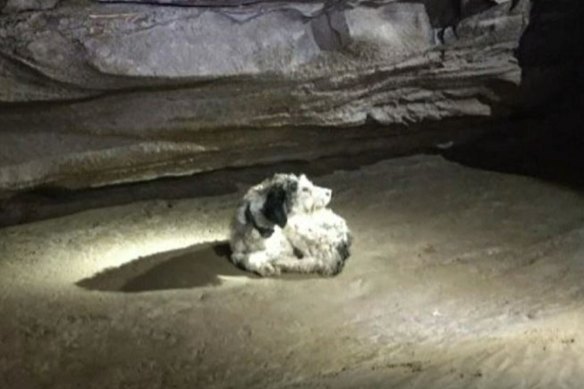 Abby the dog after Gerry Keene and his caving group spotted her deep inside a Missouri cave.Credit:Gerry Keene

The cave tunnel system is about 35 km, one of the longest in Missouri, which is known as the Cave State with more than 7300 recorded caves.

Abby was quiet and relaxed as they moved her through the tight spaces, perhaps because she knew she was being rescued, Haley said.

“She was also extremely weak and emaciated from lack of food,” he said. “She did have water in the cave. If not for that, she wouldn’t be here.”

He and Keene noticed that her claws were sharp and long, which indicated that she hadn’t walked in quite a while, he added.

When the pair surfaced with Abby, her grateful owner, Jeff Bohnert, 55, rushed over to get her and gingerly bring her home. He said a neighbour had alerted him about the photo taken by Keene.

He was flabbergasted to learn that his adventurous dog had been found 500 feet underground, two months after she went missing.

“I was absolutely astonished that she was still alive,” he said, noting that the cave is about three km from his house. “She’s a real survivor. It took a while for her eyesight to adjust after being in the darkness for so long. But she’s coming around.”

He and his wife, Kathy Bohnert, gently gave Abby a bath, and they made a large batch of chicken broth to feed to her in small amounts.

“It had been a long time since she’d had food, so we gave the broth to her in tiny increments to get her stomach moving again,” Bohnert said. “She’s still pretty weak, but she’s responding to the nutrients.”

He said that on the day she went missing, she was out playing off leash “in the country” with their other dog, Summer, as they like to do.

“Only one dog came home,” he said. “She hangs pretty closely with Summer, so I knew something was definitely wrong when she didn’t come back. It was sad to know she was missing.”

He said he looked for her and put out the word she was missing, but had no luck.

Abby has been part of their family for 14 years, ever since he got her as a puppy for his daughter, Rachel Bohnert, then 8.

Abby is now able to take short walks on a leash, and she seems happy to be reunited with her pal Summer and the family cat, Fuzzy, he said.

“We’re all really thankful to these two guys who brought her out,” Bohnert said, noting that he gave ice cream to the cavers to help them cool off after the rescue.

Haley and Keene said they were happy to make the trip.

“If it weren’t for our cave projects that weekend, we never would have found that dog,” Haley said. “When my head finally hit the pillow that night, I fell asleep with a smile on my face.”