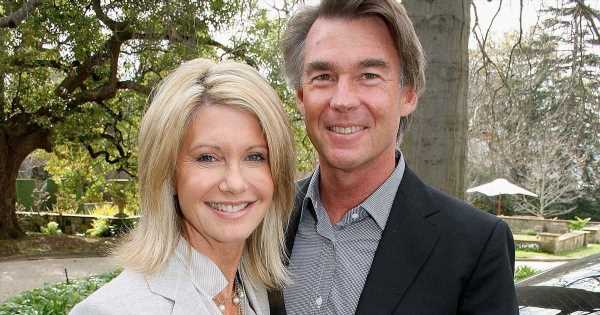 As the world mourns the indomitable Olivia Newton-John following her tragic death, many thoughts have turned towards her grieving husband John Easterling, who had been tirelessly supporting the star through her cancer battle since they first met in 2005.

The heartbreaking news of the Grease star’s death rocked the world on August 8 2022, as a Facebook post revealed her sad passing.

"Dame Olivia Newton-John (73) passed away peacefully at her Ranch in Southern California this morning, surrounded by family and friends,” the post read.

Although no cause of death was given, it is widely thought to be related to her breast cancer diagnosis, with the star having battled against the disease for over 30 years.

For over half of that time, John had been by Olivia’s side as she bravely fought against the disease, with the pair even championing the use of plant medicine to help combat the increasing pain and discomfort.

Here, we take a closer look at their enduring marriage over the years.

American businessman and environmentalist John Easterling, 70, first met Olivia at some point during the early 90’s, after a friend introduced them to each other and thought they would hit it off.

Both sharing a keen interest in spirituality and holistic cures, the two became fast friends, with John even going on to help Olivia to manage her cancer symptoms with medical marijuana that he grew himself.

It wasn’t until 15 years after their first meeting that the pair began to date, however, with the couple first stepping out together in 2007 after falling love during a trip to the Amazon.

The loved up couple first went public with their romance at the opening of stage musical Xanadu on Broadway in 2007. The roller disco inspired production was a musical comedy adaptation of the 1980 film of the same name, a film which Olivia herself starred in.

The following year, the loved up couple made numerous appearances together, including at the G'Day USA Gala with John Travolta, while the pair also participated in the Great Walk to Beijing challenge to raise money for the Olivia Newton-John Cancer Centre, which John and Olivia had co-founded to help others struggling with the terrible disease.

In the Summer of 2008, John and Olivia tied the knot in a secret ceremony in Peru, held on June 21. The couple later tied the knot again in Florida on June 30.

The marriage was a closely guarded secret, with only her daughter Chloe Rose Lattanzi knowing about it until it was formally announced to family and friends on July 4, at a celebratory barbecue at her home.

"It was the one thing I could keep private," she told PEOPLE at the time. "That's how we wanted it because my life is so public.”

Multiple public appearances followed in the wake of their marriage, with the couple frequently attending events and red carpets together, always with a smile on their face.

Appearing at everything from the American Country Music Awards to lavish red carpet premieres alongside stars such as Hugh Jackman, the duo appeared to be very much in love and thriving with their new life as a married couple.

By 2017, Olivia’s cancer had sadly returned, this time metastasising and having spread to her sacrum. Rather than be defeated by the disease, it renewed her passion to fight it, with John supporting her every step of the way – even going so far as to grow his own medical marijuana to help ease the pain of her condition.

In October 2020, the couple launched the Olivia Newton-John Foundation Fund together, to help raise vital funds to continue to support research into plant medicine for the ongoing treatment of all forms of cancer.

John Easterling announced the tragic death of his beloved wife at the age of 73 on August 8 2022.

"Dame Olivia Newton-John (73) passed away peacefully at her Ranch in Southern California this morning, surrounded by family and friends," he wrote on Instagram, echoing the post that had been shared on Facebook.

He continued, "Olivia has been a symbol of triumphs and hope for over 30 years, sharing her journey with breast cancer.

Her healing inspiration and pioneering experience with plant medicine continues with the Olivia Newton-John Foundation Fund, dedicated to researching plant medicine and cancer.

In lieu of flowers, the family asks that any donations be made in her memory to the @onjfoundation."