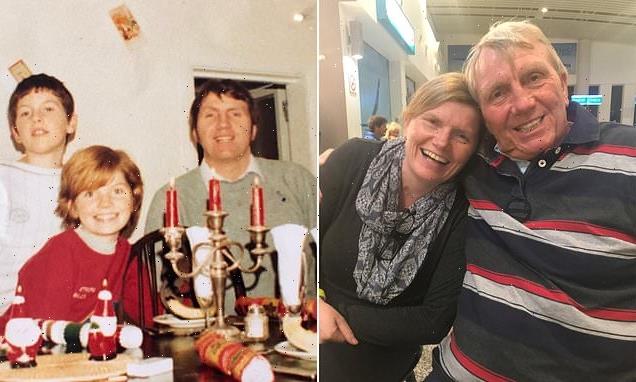 ‘While I wasn’t ashamed of him, I knew it was a secret’: The author who taught her father how to read reveals inspirational journey which highlights adult literacy issues

When I was eight years old my mother used to test my spelling from a big, red book. I loved everything to do with language and flew through the words, asking her to do the next page and the next.

Sometimes my father would join in. Not as the person holding the book, but as the learner.

He was, at the age of 30, trying to learn to read and write. He wasn’t as good as I was, but he encouraged my mother to make it into a competition. I always won and he was always proud of me. 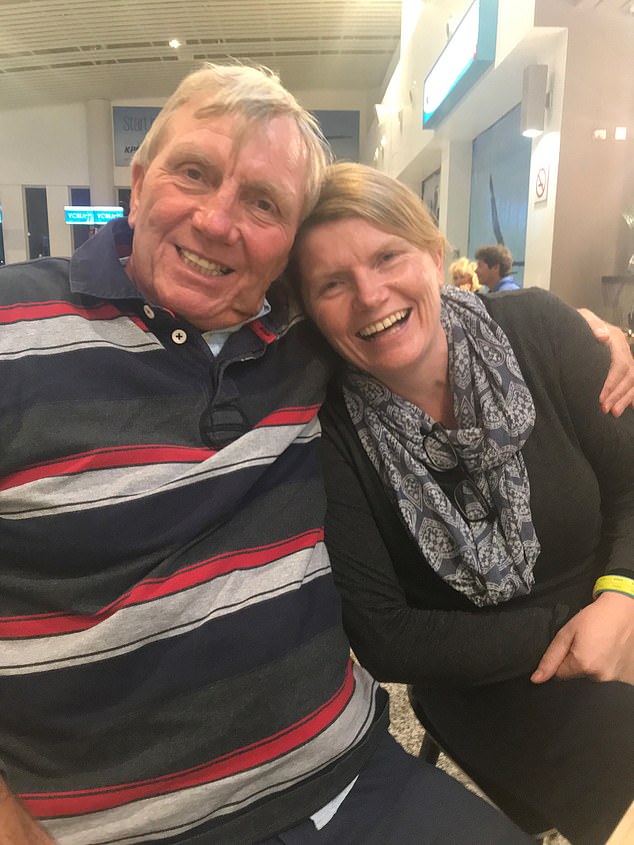 Cathy Rentzenbrink pictured with her father. She writes: ‘It never occurred to me to be ashamed that Dad struggled to read and write. There were so many other things he could do. He was jolly and kind, quick to help people out, really good at practical things’

‘You’ll go far,’ he would say. ‘Education, that’s the thing. You don’t want to earn your money by going down a mine like I do. You want to get educated and then you won’t have to work nightshifts in the dark and cold.’

I always wanted to stay up late reading and wasn’t allowed, so night shifts down a Yorkshire mine sounded glamorous to me. When I heard him come in, I’d scamper downstairs in my pyjamas for stories of the night before.

He was a great storyteller. He said he was like a cat with nine lives and I loved hearing about the time he was trapped between two trains down a mine, or when he fell between two ships in Rotterdam.

He’d had a 6 in nail all the way up through his foot and metal splinters in his eyes, and several times had only just missed being squashed by falling objects.

It never occurred to me to be ashamed that Dad struggled to read and write. There were so many other things he could do. He was jolly and kind, quick to help people out, really good at practical things. 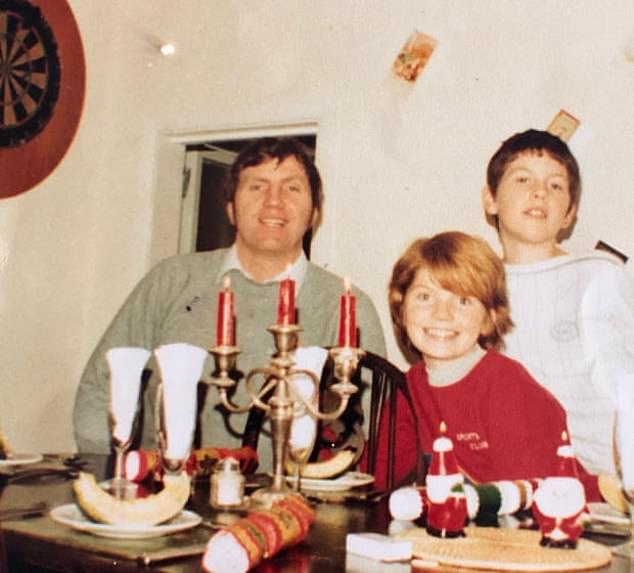 Cathy writes of her father: ‘He was, at the age of 30, trying to learn to read and write. He wasn’t as good as I was, but he encouraged my mother to make it into a competition. I always won and he was always proud of me’

I did notice that people who liked him would call him a rough diamond and that not everyone approved of him.

He didn’t like signing things. It made him anxious. I had a homework diary that needed signing every week but he hated doing it and once, when my mother was away, told me just to forge her signature.

While I wasn’t ashamed of him, I think I picked up that it was a bit of a secret, something to be worked around rather than openly admitted, and I know this is the same for others. The shocking fact is that eight million adults in this country can’t read.

Dad was the youngest of nine, born in a poor area of Ireland’s Cork city, and grew up standing in the queue for the pawn shop with his mother. They had nothing but he was happy, he said — until, when he was eight, his mum died and the family fell apart. 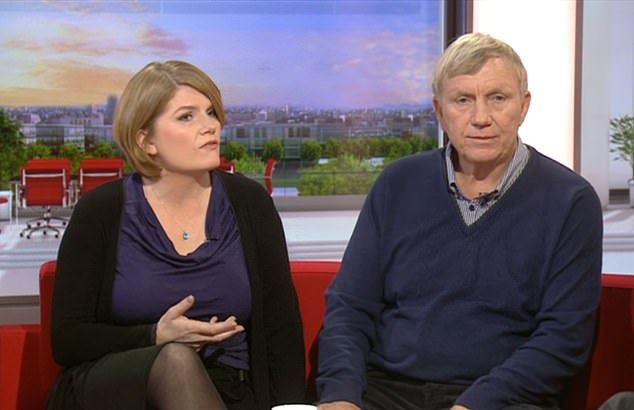 School was hard. The teachers hit him for not paying attention and when the other children started teasing him for being dirty, he decided he’d had enough. He became a truant, spending his days running away from the schools inspector.

By the time he was 15, his father had died, too, and Dad had gone feral. He thought of himself as stupid and couldn’t see a future.

He ran away to sea and for the first time ever had enough to eat. When he was 18 he came to the Cornish port of Falmouth. It was 1968 and he met my mother on Custom House Quay. It was love at first sight.

They embarked on a partnership that endures to this day and she did all his reading and writing for him.

By the time of the big, red spelling book, Dad was going to adult education classes because he needed to be able to write shift reports. I was helping him learn too. He’d sit with a newspaper and ask me to help with difficult words. I’d pronounce the word and listen as he’d try to say it back.

When I was in school plays he would help me learn my lines. One night I realised I’d got it wrong and he hadn’t said. He admitted it was too hard for him to follow and he thought I sounded magnificent anyway.

A couple of decades later, his reading took another jump. I gave him a signed copy of David Beckham’s autobiography, just because I thought he might like to own it. I was amazed when he rang me to say he’d read it.

He said he’d been feeling more confident with reading the sports pages of the newspaper and decided to have a go. ‘It wasn’t as hard as I thought it would be,’ he said. ‘I’m going to read Bobby Charlton’s book next.’ 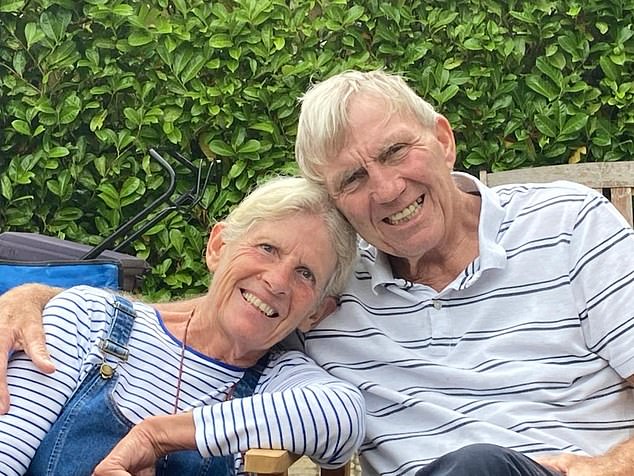 Cathy says: ‘I owe a lot to my literate mother, but just as much to my kind and clever father…’ Both pictured

He worked his way through sports biographies and then asked me to recommend a novel. I suggested Jane Eyre because I thought he’d respond to the tribulations of a fellow orphan.

But when I asked how he was getting on, he admitted it was too hard. I hadn’t thought to tell him he didn’t need to read the academic introduction.

I then suggested a couple of thrillers and he was away again. It was like hand-rearing an injured chick and teaching him to fly like a falcon.

The first time he read a whole book in a day was when I was giving birth to my son: my mother was in with me and Dad was in the waiting room.

He loved to read on holiday but said people stared: ‘No one expects to see a man with as many tattoos as I’ve got reading a Booker Prize-winning book.’

Inspired by Dad’s journey, I got a job working for literacy charity Quick Reads. I started going into prisons — more than half the prison population have literacy issues — and talking about Dad because I often met men who had lost a parent at a young age.

‘Thanks for telling me about your dad,’ said one man, ‘It is amazing to me that someone who sounds like me could have a daughter who turns into someone like you.’ I still well up when I think about all the loss and longing in that sentence.

Dad and I went on BBC Breakfast together a few years ago to talk about adult literacy and his journey. 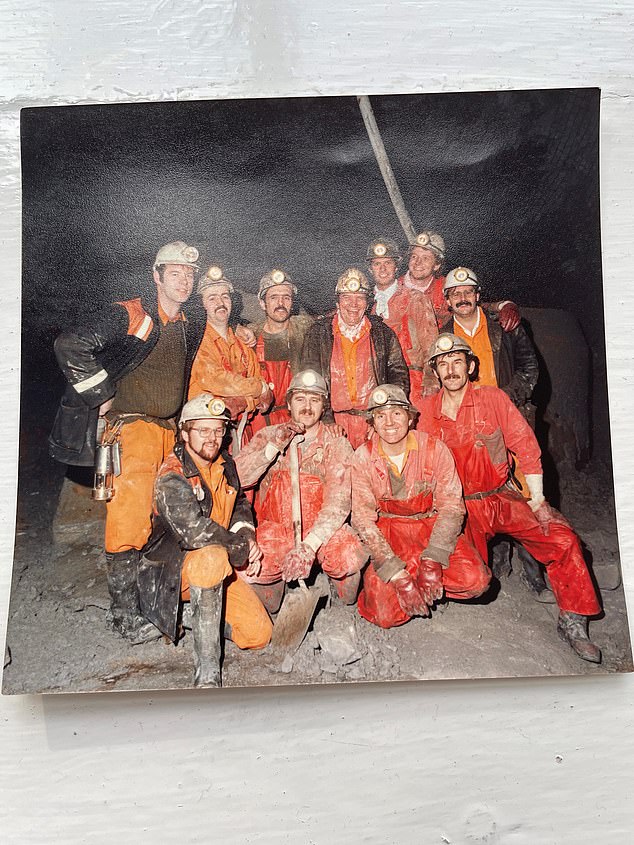 Cathy’s father pictured bottom right. She says: ‘I always wanted to stay up late reading and wasn’t allowed, so night shifts down a Yorkshire mine sounded glamorous to me…’

He was so excited, but just before we were about to go on air they handed him a consent form to sign. He went white. He thought he had to try to read it — all the dense legal language — and was panicking.

I just pointed to the space for his signature and told him to scribble there. I thought how, even here, where he’d come to talk about his literacy struggles and everyone was sympathetic, it was still so stressful and shaming.

Dad can write now, so does shopping lists and crosswords, but, as he says, punctuation is a foreign country and he has no idea about grammar.

He was proud of me when I beat him at spelling and he’s still proud of my prowess with words. I know that, just like that man in the prison, he can hardly believe that someone like him has a daughter like me — a published author of five books.

But he should believe it. I owe a lot to my literate mother, but just as much to my kind and clever father who has always believed I could go far and who gave me the lifelong gift of a childhood full of trust, love and stories.