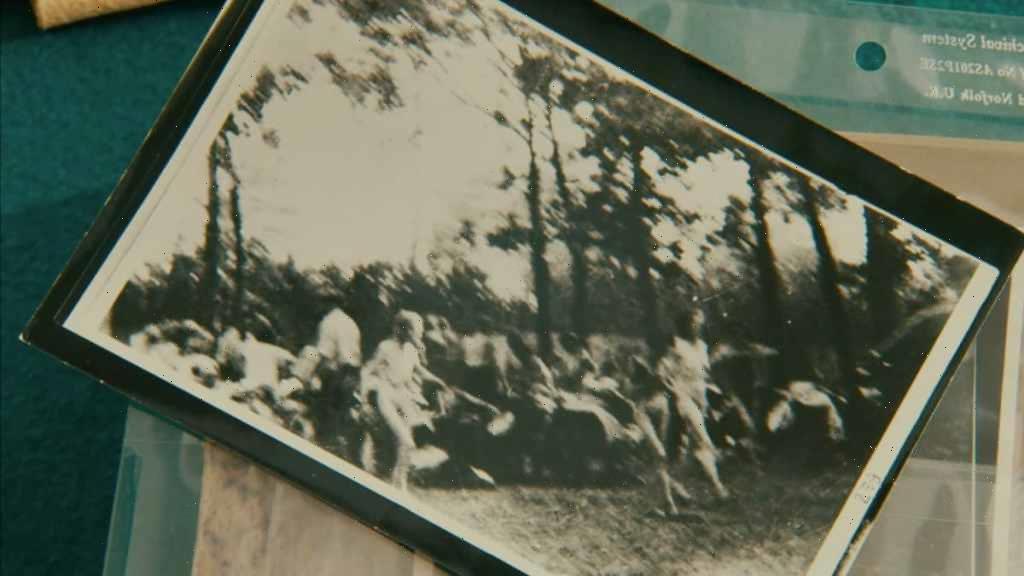 In one of the hardest sequences to look at in “From Where They Stood” (it’s also one of the hardest to look away from), we see four photographs taken inside the Buchenwald concentration camp by Alberto Errera, a Jew from Greece who was a member of the Sonderkommando — the inmates who were allowed to live, at least for a time, because they agreed to be part of the grisliest work detail. There has never been a known photograph that exists of what went on inside the gas chambers. But Errera came close by taking several clandestine photographs from the gas chambers, giving us a window into what happened before and after.

One of his images shows a group of women prisoners, several of them naked, against a woodland setting; they think they’re about to take a shower, which is the lie that was told to prisoners to get them to enter the gas chambers. There are also two photographs of the Sonderkommando — the only two in existence — that show several of them walking among a sea of corpses, which they have just dragged out of the gas chambers. The eeriest thing about the photo is that smoke rises all around them. The crematorium wasn’t functioning that day, and their job was to set fire to the corpses in the open air.

As we watch and listen, a small team of European Holocaust historians comment on these photographs, trying to pinpoint, as much as possible, what’s going on in them. Why do the Sonderkommando simply look like men at work? Because they’ve done this many times. Is one of the nude women holding a newborn? The photograph is too grainy for us to make that out, but it looks, terrifyingly, as if she might be. Like so many visual records of the concentration camps, these photographs haunt us because they sit on the fault line between life and annihilation.

A decade after the end of World War II, the French director Alain Resnais made “Night and Fog” (1956), a 32-minute documentary about what went on in the Nazi death camps, and for many of us it remains the definitive record of that profound horror. Resnais contrasted black-and-white footage shot in the camps — to this day, it remains the most graphic footage of those events most of us have ever seen — with scenes shot in color, often at the same locations, 10 years later, to create a dialectical tableau of the past embedded in the present.

In “From Where They Stood,” the director, Christophe Cognet, employs a similar strategy, though where Resnais took half an hour of screen time to etch the Holocaust into our souls, this movie, with its circular spirals of talk (the commenters chew over what’s happening in each photograph in a way that’s often revealing but, on occasion, simply very French), takes two hours to accomplish something that is less elemental.

Yet the movie, in its slightly academic way, is a meditation that heightens our perception. The photographic record of the Nazi era has sometimes made it seem as if it literally existed in black-and-white. Here, seeing the camps today in soft autumnal colors, bathed in the sounds of wind and birdsong, we’re achingly aware that this is, in fact, what it was like — not a monochromatic hell but a vision of nature perverted. Cognet and his team created negative blow-up transparencies of many of the photographs on glass, and as they poise them against the identical locations, we feel eerily transported. In one uniquely disturbing set of photographs, taken by Joanna Szydlowska in 1944, several women prisoners display their wounds. They were victims of Nazi “medical experiments” (one had her legs shortened), and they look at us across time.

The ultimate horror of what went on in the camps remains out of reach — a reality impossible for any prisoner to have captured, and maybe too unfathomable to be viewed. And it lends a mystery to these photographs that’s unique in the 20th century. But “From Where They Stood” also captures the life inherent in the fact that these photographs exist. The prisoners who snapped them took great risks to steal and smuggle cameras, and to hide the rolls of film after they were shot. They did it as a form of resistance: a testament to what went on in the camps, which in some cases, as in the 7 photographs taken by Wenzel Polak, amount to an astonishing undercutting of victimization mythology — we see shots of Polak and several compatriots, smiling and striking poses of casual strength. The commenters make the point that if it weren’t for the striped uniforms, you’d never guess that these people were in a concentration camp. They look like they don’t belong there. Which raises the question: Why would we look at anyone and think otherwise?