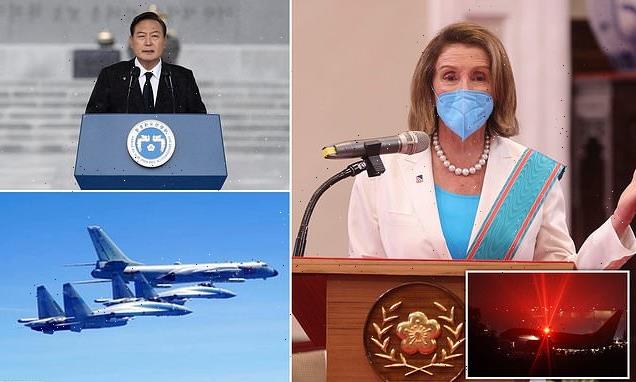 House Speaker Nancy Pelosi departed Taiwan Wednesday after her controversial visit that infuriated the Chinese government – only to have the geopolitical tensions follow her to South Korea.

Pelosi and her congressional delegation’s next stop is Seoul, where she will meet her South Korean counterpart, National Assembly Speaker Kim Jin-pyo and other ruling party members on Thursday.

But South Korean President Yoon Suk-yeol won’t be meeting her. Yoon is taking time off at home in Seoul.

An official from the presidential office told the South China Morning Post Yoon would not be greeting the high-profile US visitor, whose stature as a powerful Democratic leader and second in the line of succession infuriated Beijing and caused a diplomatic row.

‘In the first place, there was no such a plan (for Yoon’ meeting Pelosi) as the president’s vacation schedule coincides with her visit here,’ the official said. 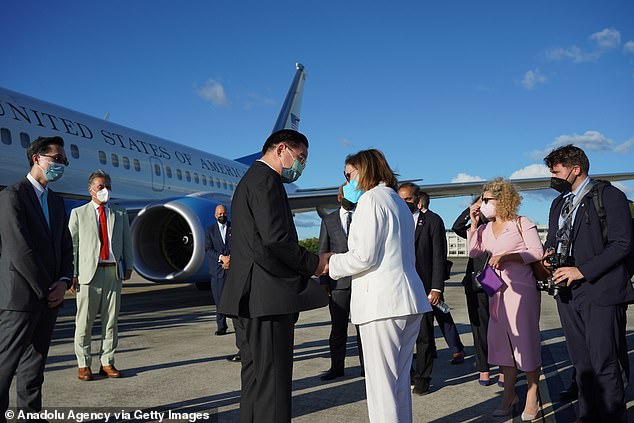 House Speaker Nancy Pelosi and her 5-member congress delegation depart Taipei Songshan Airport to South Korea after Pelosi’s visit within her Pacific tour in Taipei, Taiwan on August 3, 2022. The tensions over her visit are following her on her next leg, to South Korea

The PRC made its anger clear with a series of war games for August 4 to 7, which were revealed on a map to encircle Taiwan.

‘Today the world faces a choice between democracy and autocracy’ she said.

‘America’s determination to preserve democracy, here in Taiwan and around the world, remains ironclad,’ said the speaker.

Her trip earned domestic backing from many Republican elected officials, after Biden cautioned July 20 regarding her trip that ‘the military thinks it’s not a good idea right now.’

White House security spokesman John Kirby said Monday that Biden had never called Pelosi to ask her not to go, and that it was the prerogative of lawmakers to set their own trips.

That didn’t stop Beijing from airing its resentment before and after Pelosi’s government plane landed in Taipei.

‘The US side will bear the responsibility and pay the price for undermining China’s sovereign security interests,’ foreign ministry spokeswoman Hua Chunying said at a regular press briefing Monday.

Chinese Foreign Minister Wang Yi said ‘the US breach of faith on the Taiwan issue is despicable’ in comments published on his ministry’s website Tuesday that did not specifically mention Pelosi.

Kirby responded to China’s moves in an appearance on Fox News Wednesday.

‘We’re certainly watching them as closely as we can. You might recall on Monday we said publicly that this is exactly what we would expect the Chinese to do in the wake of, or even during, Speaker Pelosi’s trip. So this is pretty much the playbook we expected,’ Kirby said.

‘We’ll be watching to see how they develop. Again, we urge Beijing not to escalate the tensions. There’s no reason to. Nothing about Speaker Pelosi’s trip was inconsistent with our longstanding approach to both China and supporting Taiwan’s self-defense.’

Pelosi at a news conference poked Beijing more making much more of an incident for her trip than one by a congressional delegation of male senators in April.

‘They made a big fuss because I’m the Speaker, I guess. I don’t know if that was a reason or an excuse,’ she said. ‘Because they didn’t say anything when the men came.’

The U.S. gave official recognition to the Chinese regime in 1979, opening the ‘one China’ policy. But the Taiwan Relations Act commits the U.S. to meeting Taiwan’s defensive needs. 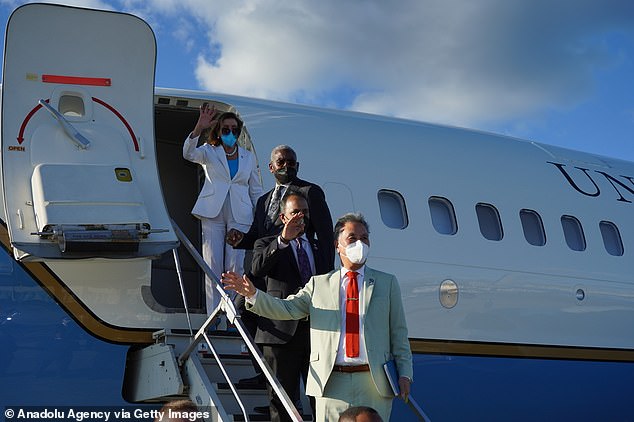 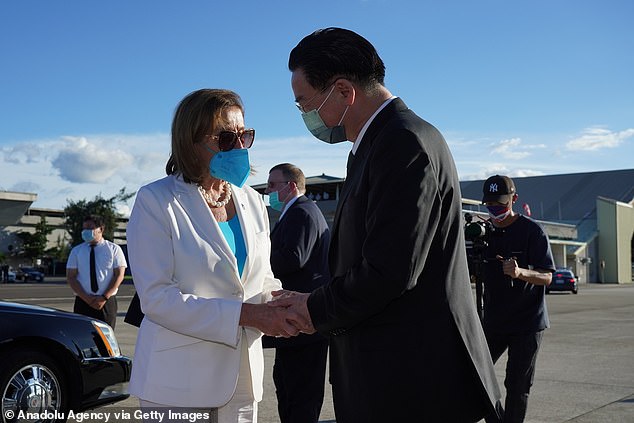