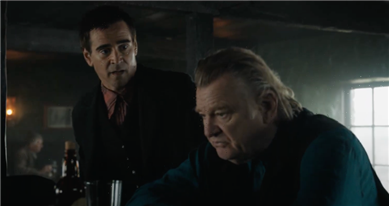 Academy Award winner Martin McDonagh is back, this time with a self-described “break-up story” about two friends whose abrupt parting of ways spurs unforeseen consequences.

Colin Farrell and Brendan Gleeson reunite with each other and McDonagh for the upcoming film, having previously worked together on the director’s well-loved 2008 crime comedy “In Bruges.” Earlier this year, McDonagh told Vanity Fair he hoped “The Banshees of Inisherin” would entertain the cult fans of “In Bruges” in similar ways, but that it “could be a little more, at least at the outset, odder or weirder — and definitely something different.”

“The Banshees of Inisherin” is set and was shot in McDonagh’s native Ireland (far from his last project, “Three Billboards Outside Ebbing, Missouri.”) Against the backdrop of the Irish Civil War in 1923, Farrell plays Pádraic, a contented man whose chipper attitude is often accompanied by an adorable miniature donkey named Jenny. Opposite him is Gleeson as the curmudgeonly Colms, who inexplicably turns his back on the friendly Pádraic one day, claiming: “I just don’t like you no more.”

“This is about things getting inexorably worse from a simple, sad starting point,” McDonagh told Vanity Fair. As Pádraic pursues an explanation from Colms with ruthless tenacity, the once affable neighbors’ blooming conflict creates a town-wide schism in the fictional community of Inisherin. “It’s just aiming for the truth and hoping for the best,” McDonagh continued, saying “Banshees” is his “quietest film” but also among his most visually enjoyable.

“I wanted it to be as beautiful as possible,” the filmmaker said. “To aim for beauty and for cinema. Because if you heard of a story of two guys grumbling at each other, and you didn’t have the epic kind of beauty, it might get a little tiresome.”

“Eternals” star Barry Keoghan also appears, as a policeman’s son who plays a pivotal role in the conflict; alongside Kerry Condon, best known for “Three Billboards” and “Better Call Saul,” as Colms’ sister Siobhán. The film will also feature reunions between McDonagh and past behind-the-scenes collaborators: composer Carter Burwell and cinematographer Ben David. It is edited by Mikkel E.G. Nielsen, who won an Oscar for his work on “Sound of Metal.”

“The Banshees of Inisherin” hits theaters October 21, but will first premiere at the Venice Film Festival on September 4. Check out the trailer below.