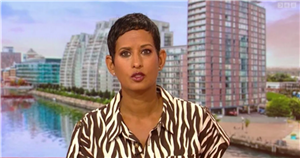 Naga Munchetty took a savage swipe at her fellow BBC co-star Matt Tebbutt’s appearance after the TV host was “shoved over” to BBC Two over the weekend.

During Saturday’s instalment of the popular morning show, the BBC Breakfast star, 47, welcomed the TV chef, 48, onto the show as they discussed the channel switch up this week.

As they linked up with the Saturday Kitchen host, the broadcaster revealed how the show had been moved over to another channel this week due to the Commonwealth Games which dominated BBC One.

And the journalist couldn’t help but fire some cheeky jabs at the cook following the schedule mix up after her show early morning show remained on the premium channel before the sporting event took place.

Before she threw the show over the professional cook, Naga made sure to remind viewers that Saturday Kitchen had moved over to BBC Two this week as she introduced his segment.

She explained: “We’re with you until half nine today because the Commonwealth Games are on, so we’re making way for those obviously.

“And Saturday Kitchen has been shoved over to another kitchen on BBC Two this morning. Matt, good morning to you.” It was clear to see Matt was hurt by her playful banter as he opened with: “Good morning … shoved over.”

Naga fired back with: “That’s the technical term. I can show you what that looks like the next time we meet.”

After Matt introduced his guests to viewers on the show, the conversation returned to Naga as he handed the airwaves back, noting: “Don’t forget we’ll be on BBC Two, shoved over to BBC Two at 10 o’clock.

The newsreader cheekily replied with: “Well done with your new shirt, it’s a nice colour. IT’s a bit bold for you. Less boring, isn’t it?”

Thankfully, Matt laughed off her pointed comment as she carried on the show in his absence.