A magistrate has slammed as “disgusting, vile and repugnant” the actions of a man who targeted a Melbourne suburb with more than 50 swastika stickers the day after the Victorian government introduced legislation to criminalise public use of the hate symbol.

Jimeone Roberts, 29, was on Monday convicted and ordered to complete 200 hours of unpaid community work after he pleaded guilty to public nuisance in Moorabbin Magistrates’ Court. Police say Roberts is affiliated with the Australian far-right organisation National Socialist Network. 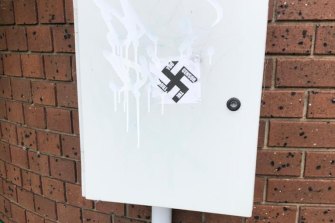 One of the swastika stickers put up in Caulfield on May 12.

Police say Roberts and Jack Darren Bell plastered the adhesives of the swastika throughout Caulfield, a suburb with a large Jewish population, about 10am on May 12.

That was one day after the Andrews government announced it would criminalise the Nazi symbol by introducing specific offences and penalties of up to one year in jail and fines of up to $22,000. The legislation had bipartisan support.

At the time of the announcement, the government said the laws wouldn’t come into effect for one year, but the May 12 incident was a factor in the government later reducing that to six months.

The court heard Roberts and Bell were seen attaching swastika stickers to the front of businesses, community organisations and the office of Caulfield MP David Southwick, who is Jewish, as well as onto poles in Caulfield Park.

Witnesses contacted police and the pair were arrested, but declined to be interviewed. Bell is also charged but is yet to enter a plea.

Magistrate David Starvaggi told Roberts he avoided jail by “an absolute whisker”, and ordered he complete an 18-month community correction order. He said he would have jailed Roberts had he not pleaded guilty.

“This is one of the most disgusting, vile, repugnant acts of anti-Semitism and racial behaviour that I have ever seen,” Starvaggi said.

“Your behaviour is tantamount to pure evil and [is] vile behaviour. It’s got no place in modern Australian society, and you are to be condemned for that.”

No personal details about Roberts were given to court, though his lawyer noted the 29-year-old acted in response to the government’s announcement the previous day. The lawyer called for Roberts to be fined given his early guilty plea.

However, Senior Constable Andrej Trajkovski, prosecuting, said Roberts’ crime was politically motivated and told the magistrate jail was an option.

“There is a line between freedom of expression and hatred,” Trajkovski said.

Community leaders and authorities have detected a surge in neo-Nazi activities in recent years, and Southwick described as “horrific” the deliberate use of the swastika against Jewish businesses.

He said the timing of the crime made it clear some people believed they could engage in anti-Semitic conduct without consequence.

“These people were giving the bird to the government, and to deliberately do this in an area where 40 per cent of the people who live in the area are Jewish, is hugely offensive and quite frankly, unacceptable,” he said.

“I am pleased the magistrate made the comments he did. They are very, very important, and I hope they deter others from doing this.

“This is an important step in the right direction, but the sooner we get these powers in place to be more specific, the better.”

Anti-Defamation Commission chairman Dvir Abramovich hoped Roberts’ prosecution would send a message “loud and clear that perpetrators of racial and hate-fuelled action will face consequences for their evil deeds”.

“This was deeply personal, and I welcome the conviction of this individual for this crime and hope that this sends a strong signal that our community will never tolerate such vile expressions of neo-Nazism in our midst,” he said.

“We cannot allow the normalisation of such sickening and threatening behaviour. The [use] of these flyers was a reminder that there are people with malice in their hearts walking our streets who fantasise of reviving Hitler’s satanic legacy and are willing to wage a campaign of terror and harassment.”

He is due to face court again later this month.