Artist, maker and designer Dom Foffani was 24 years old when he and his brother walked into to the family kitchen to find their father dead on the floor.

As his family sat around the table in the hours of grief and planning that followed, Foffani’s mother and brothers realised they had no idea of their father’s wishes for his death: did he want to be buried or cremated? What type of funeral did he want? Had he made a will?

They eventually decided against a “quiet and solemn and shy and sad” ceremony. “We wanted something that was fun and silly and stupid because that was him,” Foffani says. 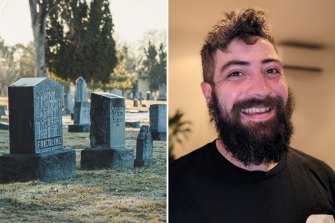 “We found out that our dad wanted to be buried, but we decided he would be cremated, and we only found that when his will came to the surface, which none of us had read.”

Foffani, from Sydney, resolved to not die the same way, and the now-29-year-old began preparing for his own death – not as morbid as it might sound. He started talking with his family about his funeral, organ donation and more. He wrote it all down and put it in his backpack before he went overseas.

A ‘good death’ is when you have considered end-of-life planning.

“The idea of what happens when something goes wrong overseas, and no one knows who I am or what my wishes are or who to contact… That was quite a practical decision I made, to write out what my wishes are,” he says.

After years of a pandemic-induced focus on death, and voluntary assisted dying now legal in all states (it is not legal in the ACT or Northern Territory), Australians are being urged to talk about plans for the inevitable.

Having the first conversation about death can be the difference between leaving your family and friends drowning in paperwork and having real space to grieve, says Cherelle Martin, a campaigner for the August 8 Dying to Know Day, a day encouraging Australians to become “death literate”.

She says if people push past the awkwardness of the first conversation, a “good death” is possible.

“If it’s an unexpected death, a ‘good death’ is when you have considered end-of-life planning,” she says. Family and friends “don’t have to make the array of decisions that come at [them]. They know … whether you want to be cremated, buried, or something else.”

“All of a sudden people are able to grieve for their loved one,” she says. “They are completely focused on honouring that person and feeling their own personal grief, rather than being caught up in decisions.”

Walter Carter Funerals’ Richard Gosling has made a living out of death. The funeral director says most people don’t go to funerals until they reach 40 or 50 years old, which adds to a sense of uncertainty.

He says it’s always better to make decisions about death and funerals when you’re not reacting to questions as they arise. “It’s a lot easier to talk about when emotion isn’t overruling it,” he says.

“People don’t like to look behind that curtain. It reminds them that they’ll be behind the curtain one day themselves,” he says of people’s reticence to discuss plans for their death.

“I step behind that curtain every day. It’s not that terrifying. But it is final.”

Liam Mannix’s Examine newsletter explains and analyses science with a rigorous focus on the evidence. Sign up to get it each week.