Prime Minister Anthony Albanese has made a “positive start” with his question for an Indigenous Voice to parliament, the federal opposition says.

But signs of a growing split in Coalition ranks have combined with official government advice to underscore the difficulty of a successful referendum.

Coalition spokesman for Indigenous Australians Julian Leeser told The Sydney Morning Herald and The Age that he welcomed the government’s announcement on the proposed constitutional amendment to ensure an Indigenous perspective is incorporated into government decision making.

In a speech at the Garma festival in Arnhem Land, Albanese proposed this question be put to all Australians in a referendum: “Do you support an alteration to the Constitution that establishes an Aboriginal and Torres Strait Islander Voice?” 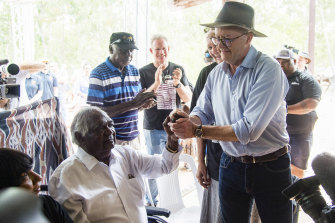 Leeser said it was important that Australians received answers to their “reasonable questions” about the Voice.

“I think the form of words is a positive start to the discussion on constitutional recognition,” Leeser said, just days after new Liberal senator Jacinta Nampijinpa Price said a Voice to parliament risked driving a wedge between Australians, prompting three senior Liberals to also express concerns.

“People want to know who will be on it,” Leeser said.

“How will those people be chosen? What will it do? And how would this respond to the issues Indigenous people face in the community? The Coalition’s got an open mind on these issues, but we need to see more of the detail. This has been a positive step today, but there’s more detail to answer.”

The former Coalition government has previously pushed for a “co-designed” Voice to government through legislation rather than being enshrined in the Constitution.

Cash said yesterday that she wanted “to see something that unites Australians and doesn’t divide them”.

“There is no consensus amongst the Indigenous communities in relation to a Voice,” Cash said, adding Price’s speech was one of the best given in Australia. “She [Price] actually called on the prime minister of Australia to listen to the voices of Indigenous people.”

Just eight of 44 referendums have ever succeeded in Australia, and, without support from the Coalition, the push for constitutional recognition will struggle to garner the widespread support needed for a referendum to be successful.

In an incoming government brief provided to Attorney-General Mark Dreyfus and obtained by this masthead under freedom-of-information laws, the Attorney-General’s Department said supporting the government to deliver this commitment would be one of its “highest priorities”.

“Prioritising this work will signal to the country that your government is committed to working with First Nations people to deliver systemic justice,” the brief says. 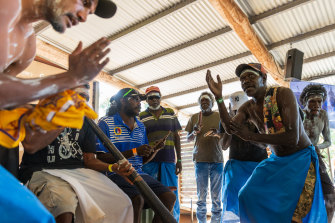 The Manggalili community performs during the opening ceremony of the Garma Festival on Saturday.Credit:Getty

“However, changes to our Constitution present a significant challenge, given Australians’ historical reluctance to make changes to our founding document.”

Albanese acknowledged in his speech that a referendum was a “high hurdle to clear”.

Geoff Scott, a Wiradjuri man and dialogue leader on the Uluru Statement from the Heart, which calls for constitutional change, said the wording of the question was the result of “years of discussion and debate”.

“I think he’s had the courage and commitment to definitely put it out there to say this is going to happen, and people need to get on board with him,” Scott said of Albanese’s speech.

“He’s saying these might not be the final words. It’s the starting point for consultation with many groups.”

Albanese said a constitutional Voice reflected the principles of “respect and consultation, strength and status” and created immunity from election cycles and the government of the day as it “cannot be silenced”.

He proposed three sentences to be added to the Constitution if the referendum succeeds: one that enshrines the Voice; one that sets out its responsibility to make representations to the parliament and executive government on matters relating to Aboriginal and Torres Strait Islander people; and one that empowers the parliament to make laws on how the Voice would be created and how it functions.

“I believe the best way to seize the momentum is by settling, as soon as possible, on the referendum question that will be put to the people of Australia,” Albanese said.

The federal government’s plan is to hold the national vote before the next election, which is due by 2025.