Olympic gold medallist Tom Daley has weighed into the Manly pride jersey debate, declaring: “I had no idea that such homophobia still existed in Australia.”

Daley, the British diver who in 2014 revealed he was gay, carried the Queen’s baton into Alexander Stadium at the Commonwealth Games opening ceremony on Thursday.

The 28-year-old has been shining a light on a very sombre number: it is a criminal offence in 35 of 56 sovereign states of the Commonwealth to be LGBT, prompting countless athletes to stay firmly in the closet in fear of harm or death.

That figure alone puts the controversy surrounding the Sea Eagles’ jumper, which prompted seven players to stand down for the match against the Roosters on Thursday night, into sharp perspective.

Nevertheless, Daley said he was shocked by the headlines coming out of Sydney.

“I see Australia as this very liberal place, so to see homophobia like that still exists is concerning,” Daley told this column. “Good on the players who wanted to play. I don’t think [the NRL] should stand for such strong views against a marginalised population. How would it be if you took a stance against any kind of minority? Why is it OK to do that against queer people?” 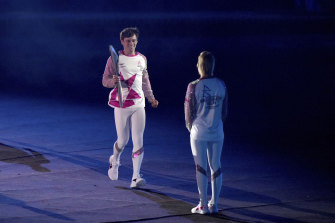 Daley made an appearance on Thursday at Pride House, a pop-up venue in Birmingham’s Gay Village that celebrates diversity and inclusion at the Commonwealth Games.

Pride House also featured at the Glasgow Games in 2014, and the Gold Coast in 2018, providing a safe space for athletes.

“There are powerful stories of athletes going to those Pride Houses who were overwhelmed to be somewhere that was a positive reflection of who they are,” Jon Holmes, from the Pride House executive team, said. “In Glasgow, a delegation from Botswana came into the house and the women were visibly moved to be somewhere where they could be their authentic selves.”

Former Jamaican swimmer Michael Gunning only starting to feel like his authentic self after coming out in 2018. Coming from a country labelled as one of the most homophobic places in the world, his reticence was understandable.

Being at an Ariana Grande concert at Manchester Arena in 2017 in which a suicide bomber killed 22 people changed that, though.

“That experience, and being so close to death, meant I really wanted to help people,” said Gunning, who will be the in-house commentator at the swimming events. I’d struggled for so long. I was so scared to come out. But I wanted to help people. If not me, then who? So I have no regrets coming out when I did.

“There have been so many athletes from the Caribbean who have approached me since I have; just so many people in Jamaica and countries where it is illegal, people sharing that burden with me. With all the death threats I’ve had, all the hate I’ve had, all the positivity has made it worthwhile.”

Gunning also features in a documentary hosted by Daley, who has visited Commonwealth countries where it is illegal — and in some cases punishable by death — to be gay.

The Commonwealth Games Federation has made a point of making Birmingham the most inclusive of all. Earlier this month, it decided that no country will be awarded hosting rights if it has anti-gay laws. 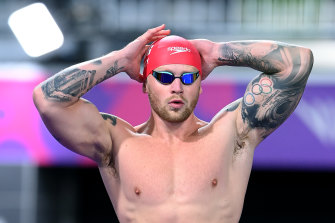 Adam Peaty is one of the hometown headliners of the Birmingham Commonwealth Games.Credit:Getty

One of the biggest stars of these games is England swimmer Adam Peaty. Perhaps the biggest, though, is Netflix’s Peaky Blinders, which focuses on a criminal gang based in Birmingham in 1919.

Peaty was front and centre of The Mirror’s coverage on Friday, dressed up like an extra on the hit series. Resplendent in flat cap and menacing expression on his face, the 27-year-old even has a gun slung over his shoulder.

No bull – it wouldn’t be an opening ceremony without a giant animal.Credit:PA

He’s quite the weapon in the chlorine, too, and is looking to overcome a broken foot that sidelined him from the world championships when he competes in the 100m breaststroke. A three-time Olympic champion, he’s won six Commonwealth Games gold medals in the past.

The Australian team’s official cheerleaders are Governor-General David Hurley and his wife Linda, who has quickly become a cult hero among the athletes.

At a function at the athletes’ village, she belted out a rousing rendition of You Are My Sunshine — and then got the athletes to do the same, facing the person sitting next to them.

The other star of the team thus far is chef de mission Petria Thomas, who is no longer the shy country girl from Mullumbimby on the NSW Northern Rivers.

She has relished the role, greeting every team member as they enter the athletes’ village, no matter what time of the day. 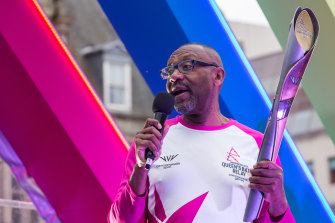 Comedian Lenny Henry didn’t get the memo that you don’t need to be good at sport to enjoy it.Credit:Getty

THE QUOTE
“No, I was never good at sport.” — Comedian Sir Lenny Henry, on BBC’s coverage of the opening ceremony, when asked if he had bought any tickets to events. Um, OK then.

THUMBS UP
The opening ceremony, which was inspired by Peaky Blinders’ creator Steven Knight, was a ripper. It didn’t paint over Birmingham’s troubled past, but beautifully celebrated its diversity and creativity. The enormous bull, which represents the historic bull ring in central Birmingham, was the star of the show.

THUMBS DOWN
There are strict COVID-19 restrictions around the athletes’ village but the sneaky little virus is starting to infect a handful of competitors, including Australia’s javelin world champion Kelsey-Lee Barber. Fun fact: a rapid-antigen test here costs just two quid, which is about AUS$3.50.

IT’S A BIG DAY TWO OF THE GAMES FOR …
Emma McKeon, who is gunning for the all-time medal records of Ian Thorpe, Leisel Jones and Susie O’Neill. She competes in the 100m butterfly and 4x100m freestyle.

IT’S AN EVEN BIGGER DAY TWO FOR …
Beach volleyball, which will be held in the heart of the city at Smithfield Market Place. Look, it’s no Bondi Beach nor Copacabana. But sand is sand and the Australian men’s pairing of Paul Burnett and Chris McHugh take on the might of the Maldives.

Get all the latest news from the Birmingham Commonwealth Games here. We’ll be live blogging the action from 4pm-10am daily.