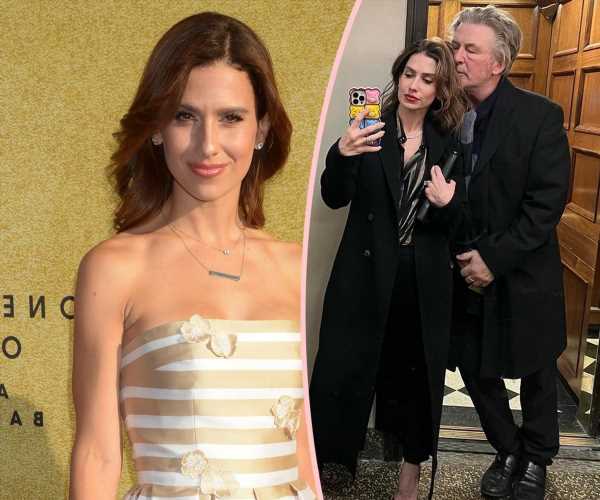 Hilaria Baldwin got real about the “darker” sides of her life with Alec Baldwin.

The 38-year-old former yoga instructor took to Instagram Wednesday to share a black-and-white picture of the couple cuddled together on a bed with his arms wrapped around her, along with a lengthy post claiming that the enemies of her husband are on a mission to destroy him. What??? She began by expressing how “wonderful” it has been to be by Alec’s side for more than a decade now:

“To enter your world and become your person has been both a joy and an eye opening experience. How many wonderful moments, meeting incredible people, doing amazing experiences, and building a family. I am forever grateful. Every day.”

However, the post quickly took a turn as she touched on the more difficult parts of her life with the 30 Rock alum – specifically how his celeb status has brought on a ton of intense public scrutiny:

“The darker part is seeing behind the curtain at how some of this ‘business’ can function and the blows and sacrifices that someone in the public eye takes for speaking up for what they believe and for helping others. Enemies of these missions seek to destroy you, in order to delegitimize your voice and purpose. This is not a new tactic…it’s as old as history…yet, how easy it is now more than ever to slander people and cherry pick and piece together strands taken out of context, ‘opinions’, or complete fabrications. And how some people believe it or stay silent out of fear.”

“Alec, how many times we look at each other and say: deep breath, in this together, keep on for the good of what we believe. Somos un buen equipo. How many times I’ve experienced people stopping you and thanking you for your philanthropy in the arts, your work with children, fighting for our environment, and yes, we all know: our politics. People see how hard you fight for what you believe is right. And we are grateful. Listen to these voices..turn down the volume on the darkness and negativity.”

The momma then noted that she has also dealt with “dehumanization” herself after experiencing public backlash, especially over her Spanish heritage scandal:

“I am the one that sees you in your dark moments…the human moments—away from the movie stardom and public figure that people are so quick to elevate or execute. My empathy for your humanity is endless… unfortunately, having experienced the dehumanization myself, (another old tactic to go after the spouse of your enemy)…leads us to the moments when we think: how much more can one body and one mind take before we crumple beneath the psychological torture?”

Concluding her message to Alec, Hilaria thanked him for using his voice for “good,” saying:

“I don’t know the ending to any of our stories, but I do know that while we are living, I want you to be told time over time how much we see you and appreciate you. And we know that you are carrying quite a load, using the privileged place of your public voice for good. Not everyone with your privilege chooses this path. And we know it’s hard. So many love you, AB, we are here for you to lean on and feel safe”

It is unclear what exactly she is referring to in this post. But as you know, the 64-year-old actor is no stranger to controversy and problematic behavior over the years, even calling his daughter Ireland Baldwin a “rude, thoughtless pig” in a leaked voicemail in 2007.

And of course, a lot of attention has been directed towards Alec over the past year since he accidentally shot and killed cinematographer Halyna Hutchins with a prop gun on the set of the film Rust. Despite facing several lawsuits over the incident, Alec has pretty much pointed fingers at everyone but himself, even passing off some of the blame for the tragedy on Halyna at one point. Messed up.

But what are your thoughts on her post about Alec, Perezcious readers? Let us know in the comments (below).