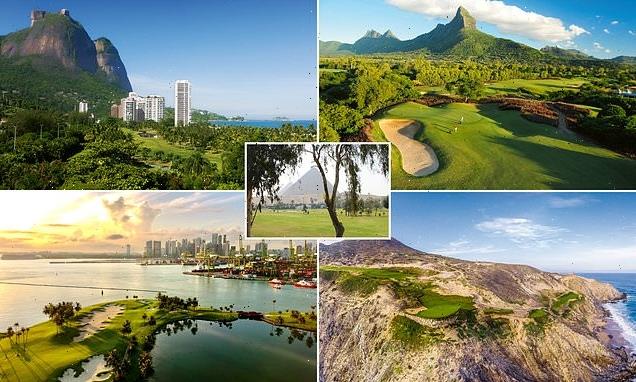 Putt-erly incredible! The world’s most jaw-dropping golf courses revealed in new book, from a fairway by Egypt’s ancient pyramids to 18 holes in Texas that transport you to the Wild West

The beautifully illustrated new coffee table book 150 Golf Courses You Need to Visit Before You Die, written by Stefanie Waldek and published by Lannoo, pools together the ‘most beautiful golf courses in the world’.

An Argentinian course that looks like J.R.R Tolkien’s Middle-earth, a nine-hole course that lies alongside Egypt’s Great Pyramid of Giza, and 18 holes in Texas that transport you ‘back to the days of the Wild West’ are among the astonishing golf courses that appear in the tome.

Author Waldek says: ‘Golf, more than any other sport, has an intimate relationship with place because it is inextricably tied to the landscape. Mother Nature herself could be considered a golfer’s opponent; her rolling hills, sea breezes, and atmospheric pressure challenge all who face her. This is why golf courses are found in some of the world’s most scenic locations.

‘In 150 Golf Courses You Need to Visit Before You Die, I have gathered an array of golf courses, from those in beautiful settings, often with an offbeat panache, to those traditionally considered “the best courses in the world”.’ 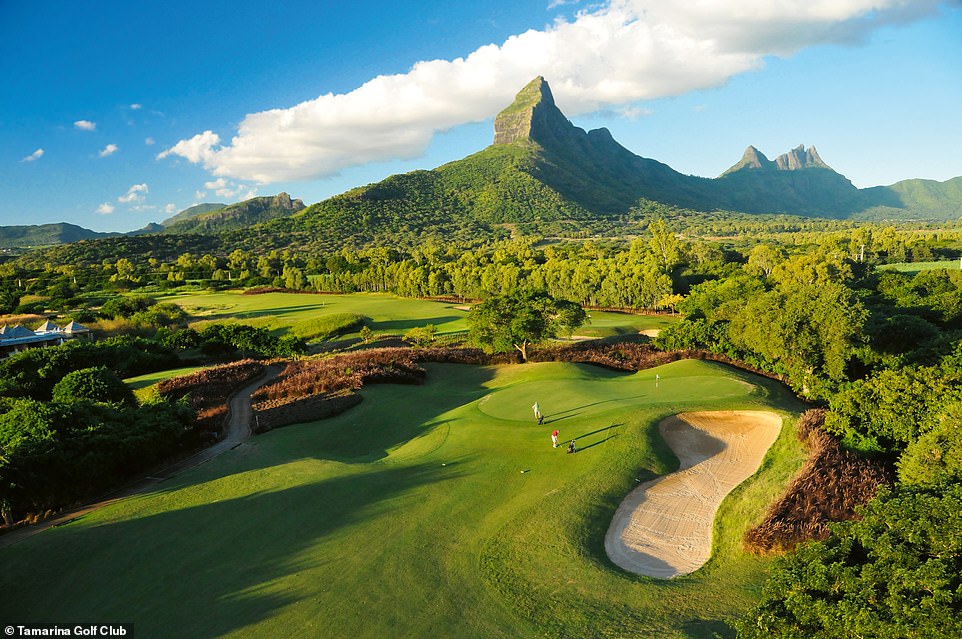 TAMARINA GOLF CLUB, TAMARIN BAY, MAURITIUS:  On this course, ‘the views are all about the mountains, including the imposing Mount Rempart (centre background) and the triple peaks of the Trois Mamelles (right background)’, the book reveals. Rodney Wright designed the course, which is primarily surrounded by ‘lush tropical forest’ and ‘open savannah’. ‘There is water here by means of the Rampart River, whose gorge and estuaries serve as hazards on a few holes,’ the book notes. According to Waldek, this isn’t the most challenging course on the ‘golf-heavy’ island of Mauritius, but it’s ‘certainly fun to take in the scenery during a round’. She adds that ‘the signature hole here is number 13, a par-three with an 82ft (25m) drop from tee to green’ 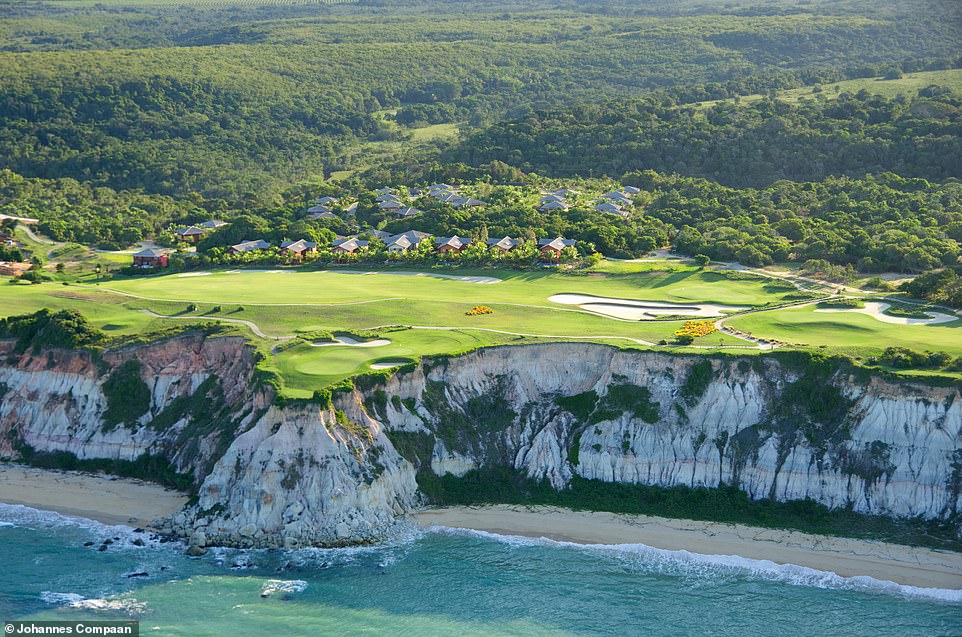 TERRAVISTA GOLF COURSE, ESTRADA MUNICIPAL DE TRANCOSO, BAHIA, BRAZIL: At this golf course – one of Brazil’s flagship courses, located in ‘jet-set chic Trancoso’ – ‘golfers play through the rain forest before emerging atop oceanfront cliffs’, Waldek reveals. Detailing the spectacular scenery that awaits at the course, which was designed by American architect Dan Blankenship, she says: ‘Four holes abut 150ft- (46m) tall cliffs overlooking the Atlantic. The particularly picturesque hole 14 is the standout as it’s set on a section of the cliffs that juts out over the beaches below’

QUIVIRA GOLF CLUB, PREDIO PARAISO ESCONDIDO, CABO SAN LUCAS, MEXICO: Quivira Golf Club, named after the ‘mythical city of gold’ sought by Spanish conquistador Francisco Vasquez de Coronado, is known for its ‘scenic beauty’, Waldek reveals. Describing the Jack Nicklaus-designed course, she says: ‘The course starts at a beachfront clubhouse before ascending the desert cliffs, running along their tops in what seems to be a gravity-defying manner (at least from the air), then descending back down to the beach. The resulting views are awe-inspiring.’ Breathtaking landscapes aside, there’s another added bonus to playing the course – Waldek recommends keeping ‘an eye out for whales as you play’ 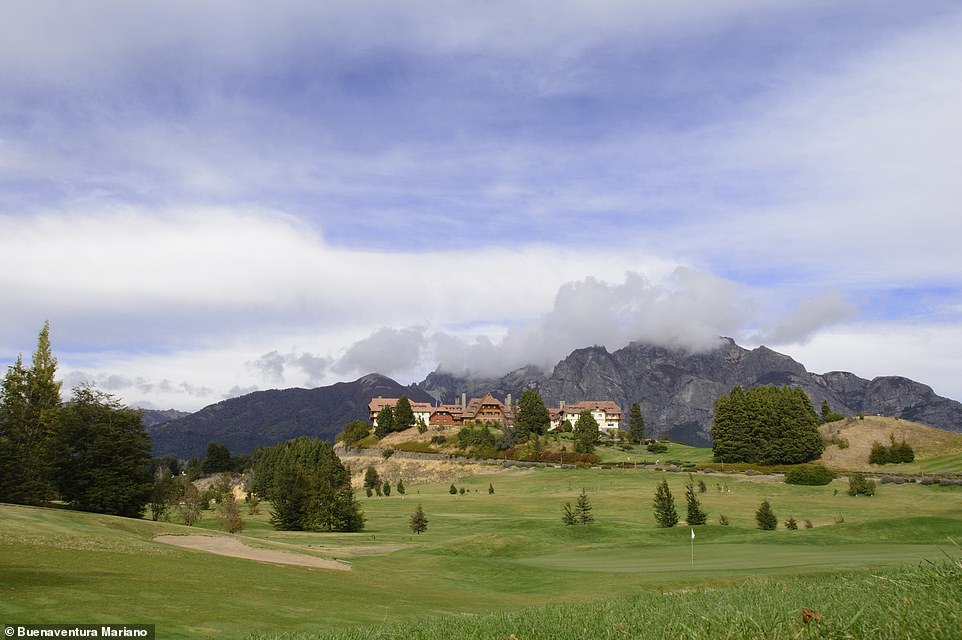 LLAO LLAO RESORT, GOLF & SPA BARILOCHE, RIO NEGRO, ARGENTINA: ‘The setting for the Llao Llao Resort in Bariloche is reminiscent of a fantasy landscape in J.R.R Tolkien’s Middle-earth,’ Waldek declares, adding: ‘But this is real life, and you’re actually in the scenic Nahuel Huapi National Park, right on the shores of Nahuel Huapi Lake with the mountains of Patagonia behind you.’ According to the author, it’s ‘one of the most breathtaking places to play golf’ and well worth the ‘long trek’ it takes to reach the remote destination. The book notes that the first nine holes were designed in the early 20th century by Luther Koontz, while the second nine were added in 1994 by Emilio Serra 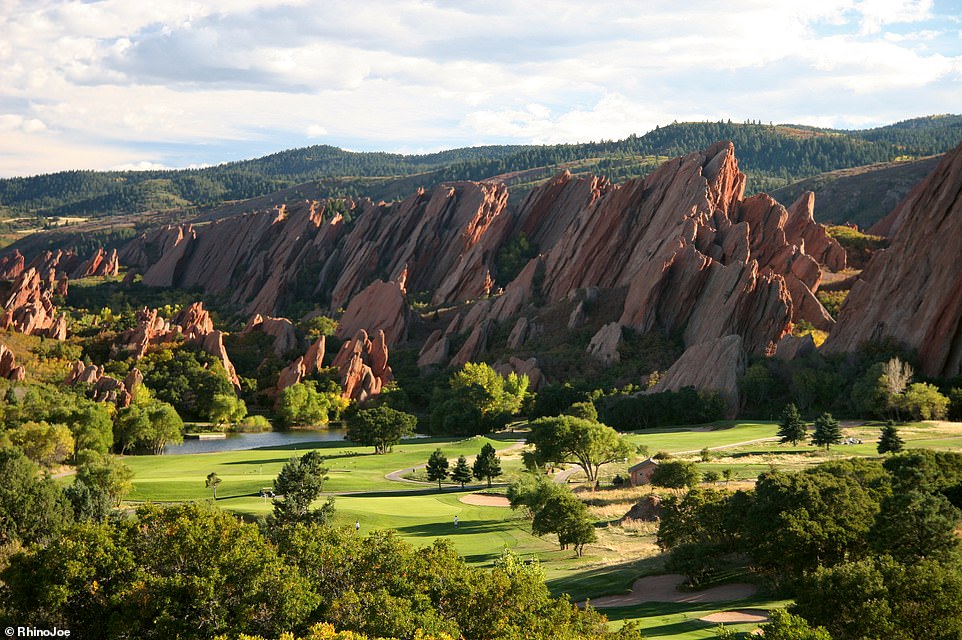 ARROWHEAD GOLF COURSE, SUNDOWN TRAIL, LITTLETON, COLORADO: This golf course, designed by American architect Robert Trent Jones Jr, ‘runs parallel to some of the most sublime rock formations in the United States’, the book reveals. Waldek writes: ‘Sheets of red rocks called flatirons jut out of the earth at a severe angle, contrasting the rolling fairways and greens – it’s hard to fathom the strength of Mother Nature’s cataclysmic forces that led to this landscape.’ The author adds that ‘if you wanted to put down your club and just marvel in the beauty here, no one would blame you’ 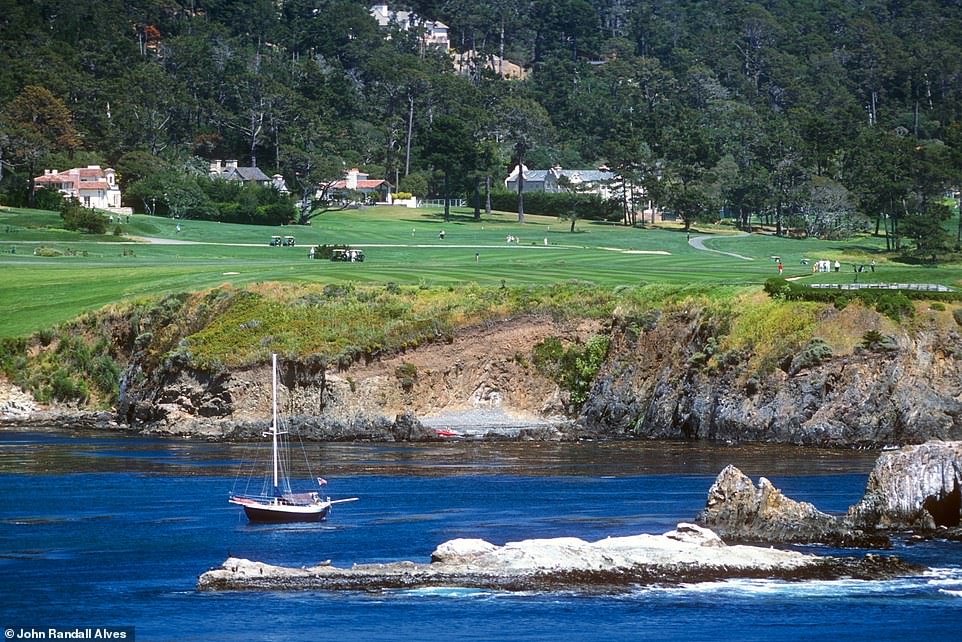 PEBBLE BEACH GOLF LINKS, PEBBLE BEACH, CALIFORNIA: Pebble Beach is known as ‘the best public golf course in the United States’, according to the book. It’s ‘open to all — or at least all who are willing to pay the high fees’. Waldek writes: ‘Pebble Beach has one of the best settings in golf history: the headlands extending into Carmel Bay. Technically speaking, it’s not the most difficult course out there, featuring a simple out-and-back design by Jack Neville and Douglas Grant laid out in 1919, then updated by Henry Chandler Egan about a decade later. Yet golfers come here for views so majestic that Golf Digest hails the course as the “greatest meeting of land and sea in American golf”‘ 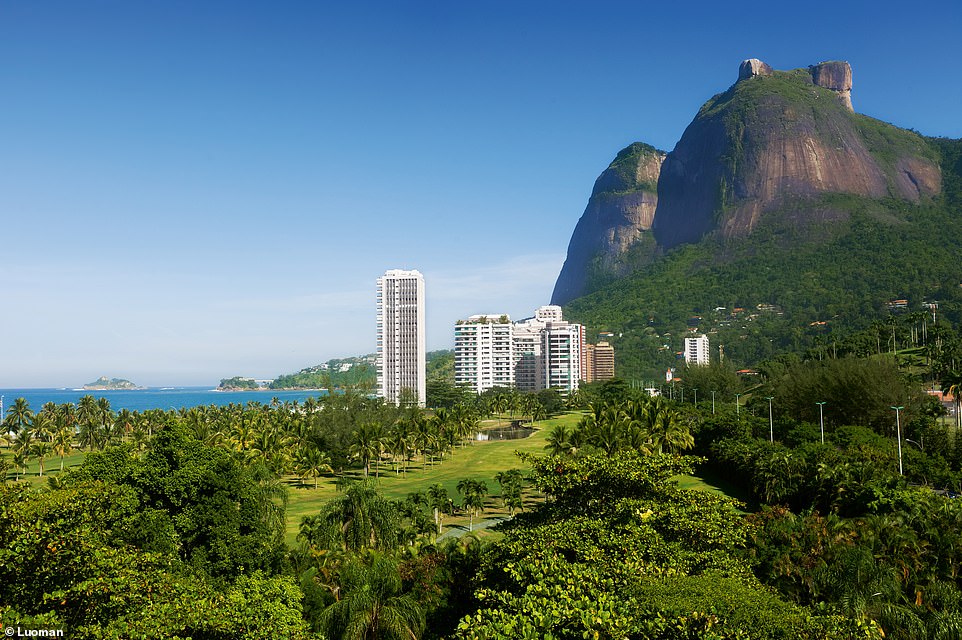 GAVEA GOLF AND COUNTRY CLUB, ESTRADA DA GAVEA, RIO DE JANEIRO, BRAZIL: ‘Founded in 1921 as the Rio de Janeiro Golf Club, Gavea, as it’s known today, was the first golf course and club in the Brazilian city, and it remains the most prestigious,’ the book reveals. Waldek notes that the course has ‘undergone a number of renovations’ over the past century at the hands of several architects, and continues to ‘delight’ players today. ‘While the club is primarily for members only, guests of certain local hotels are able to score tee times,’ the book adds 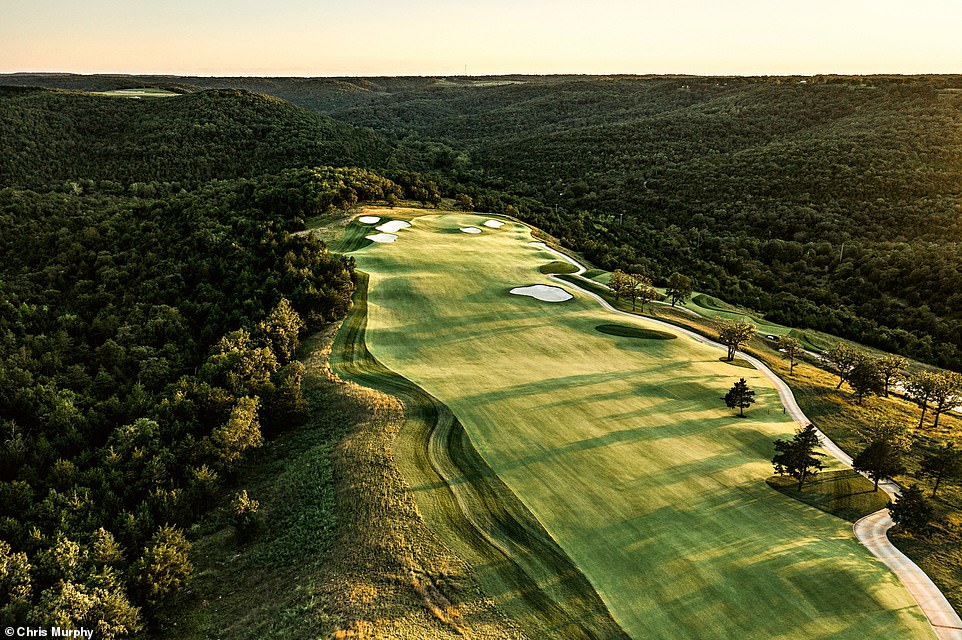 PAYNE’S VALLEY GOLF COURSE, HOLLISTER, MISSOURI: This stunning U.S golf course is the work of a legend of the golf world – Tiger Woods. Waldek writes: ‘[Tiger’s] firm, TGR Design, has realized a number of private courses, but Payne’s Valley at Big Cedar Lodge in Missouri is its first public course, named in honour of the late Payne Stewart, who was born in the state.’ She describes it as ‘a fairly approachable course for golfers of all levels’ and adds that it’s ‘perfect for a leisurely round or two with friends, so it’s not for those seeking an extreme challenge’. According to the author, a highlight of the course is ‘a particularly beautiful par-three 19th hole, complete with an island green at the base of the waterfall’ 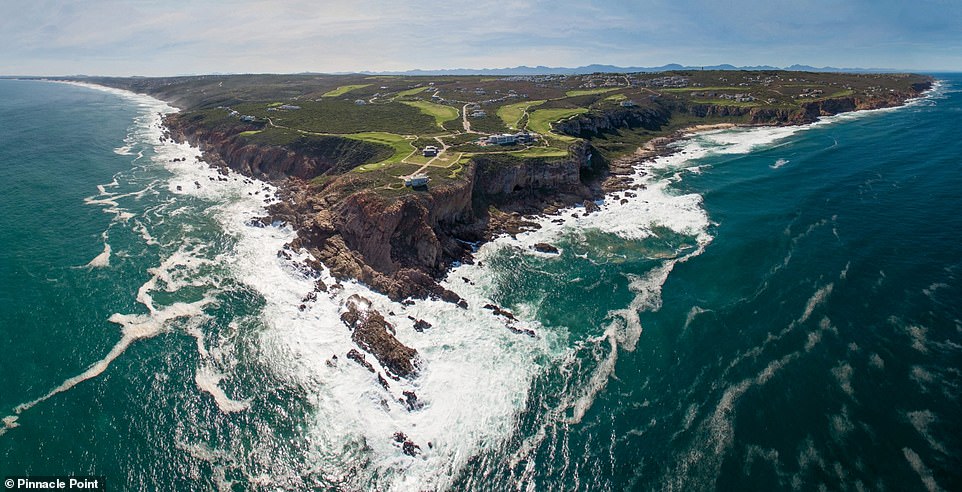 FYNBOS, PINNACLE POINT GOLF CLUB, MOSSEL BAY, SOUTH AFRICA: ‘Golfers with a fear of heights might want to stay away from Pinnacle Point Golf Club’s Clifftop Fynbos Golf Course, but if you can stomach sheer drops off the oceanfront cliffs, you’re rewarded with not only one of the best views in golf, but also an extremely challenging game,’ says Waldek. The course was designed by South African designer Peter Matkovich in 2006, who declared it ‘without a doubt the most spectacular’ golf course he’d ever designed, the book notes. According to the author, ‘seven of the 18 holes dance right along the edge of the cliffs, and four of them even challenge golfers to play over the drop-offs and the roiling Indian Ocean below’ 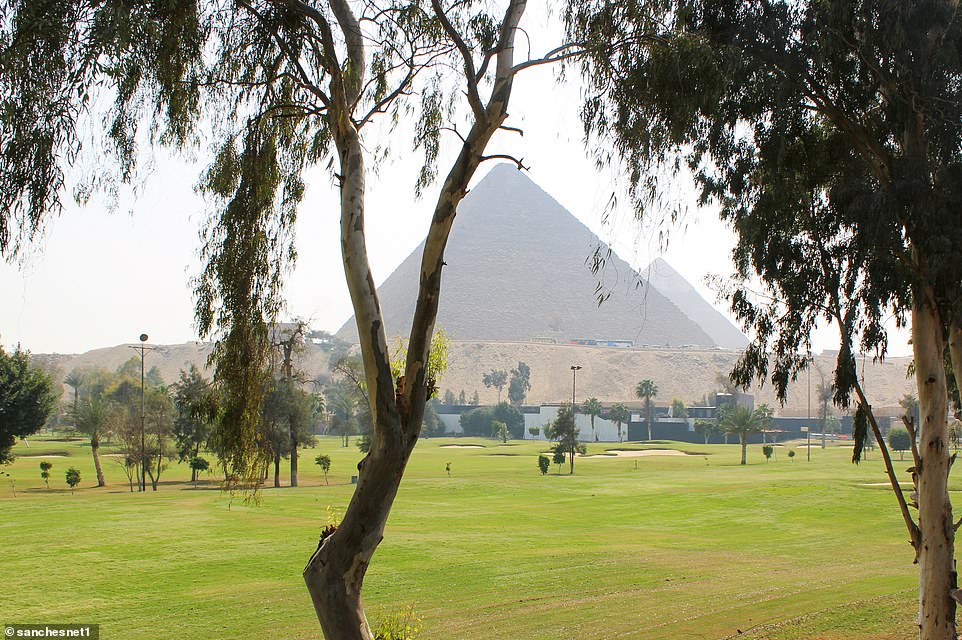 MARRIOTT MENA HOUSE GOLF COURSE, GIZA, EGYPT: At this golf course, you can get swinging right alongside the Great Pyramid of Giza – ‘the only one of the Seven Wonders of the Ancient World that exists today’. Waldek writes: ‘The historic Marriott Mena House hotel that abuts the Giza pyramid complex is home to a nine-hole course that was originally built in 1899. While the course isn’t the largest or most challenging in the world, it is certainly in one of the world’s best locations, making it a worthwhile place to spend half a day.’ However, she notes that the course is currently undergoing a renovation, so ‘you may need to bookmark it for a later date’. She adds: ‘When it reopens, it’s a must-play for its ancient backdrop’ 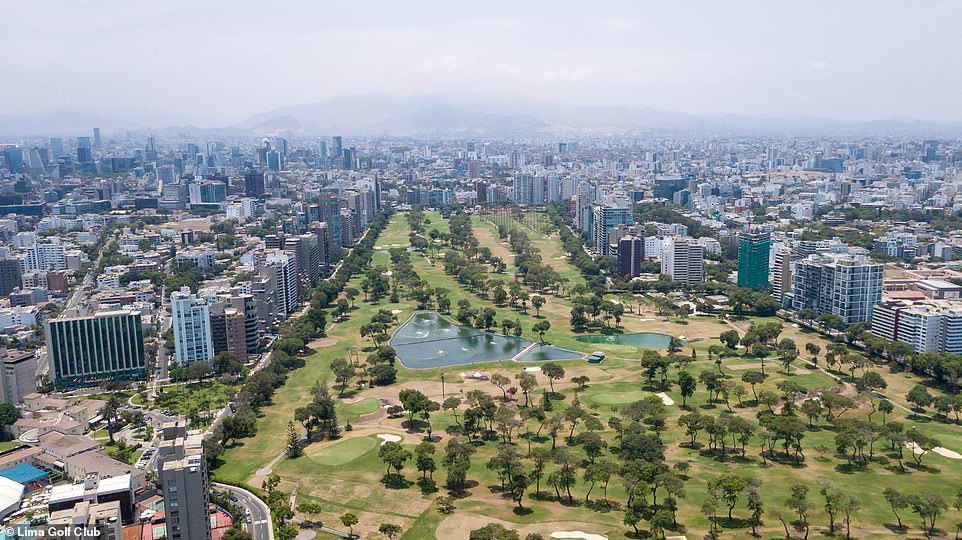 LIMA GOLF CLUB, SAN ISIDRO, LIMA, PERU:  The book observes that Lima is ‘one of the most exclusive golf destinations, with many of its courses restricted to members only’. However, ‘there are a few loopholes for visitors’, Waldek notes, revealing that the ‘historic Lima Golf Club, founded in 1924, is open to guests staying at the Country Club Lima Hotel, a heritage-protected establishment’. The book explains: ‘The course is located bang in the middle of the residential San Isidro neighbourhood – it grew around the course – and it’s one of the largest green spaces in the city today.’ According to Waldek, because of the course’s exclusivity, it’s rarely crowded, ‘which is a delight for those who play it.’ She adds: ‘It is a haven of tranquillity and beauty in the heart of bustling Lima’ 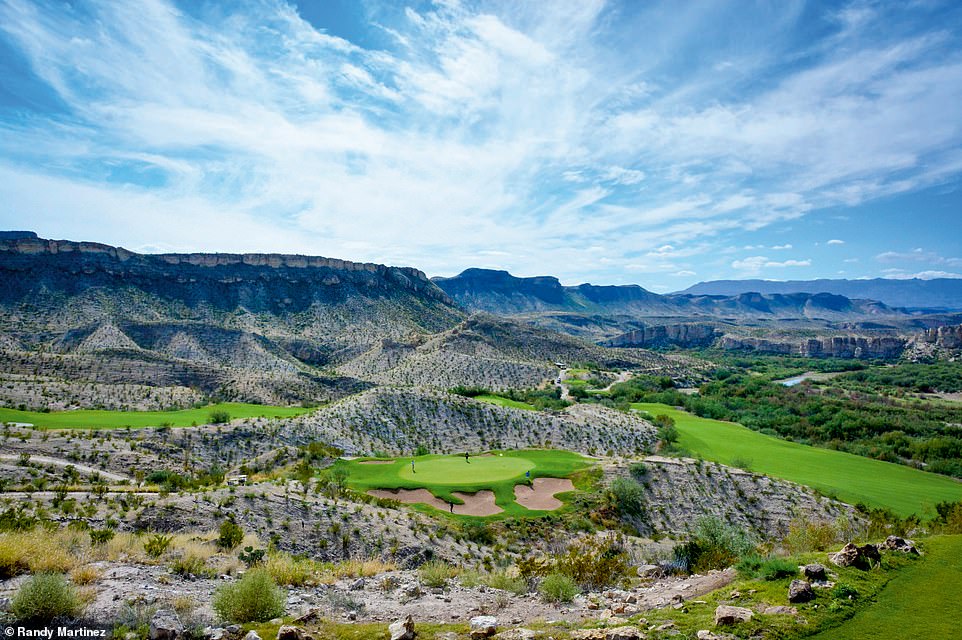 BLACK JACK’S CROSSING, LAJITAS, TEXAS: ‘Black Jack’s Crossing [golf course] at the Lajitas Golf Resort is located at the Mexican border in southwest Texas, a five-hour drive from El Paso and a seven-hour drive from San Antonio. But the payoff is worth the journey. Not only are you golfing amid the dramatic, Mars-like landscape of the Chihuahuan Desert, you’re right next to Big Bend National Park,’ Waldek reveals. Summing the course up, she says: ‘At this extremely remote course you’re transported back to the days of the Wild West.’ The author explains that the resort itself is ‘built around the former Lajitas Trading Post, a 19th-century structure that now houses the Pro Shop and the Yates Longhorn Museum.’ She adds: ‘You can see bullet holes in its walls from the Wild West days – yeehaw indeed’ 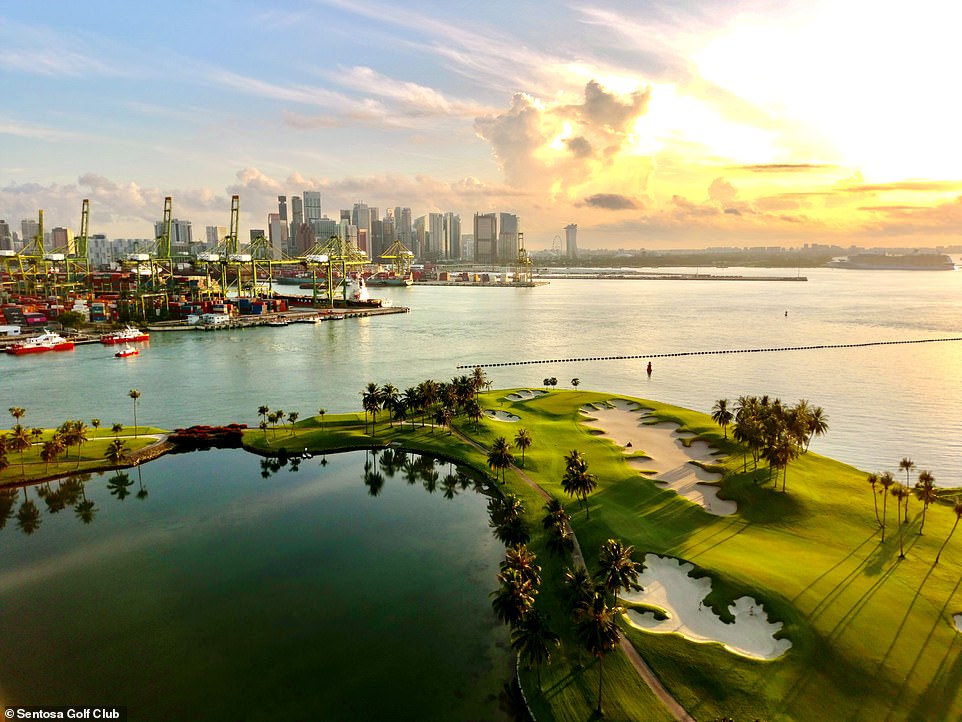 SERAPONG COURSE, SENTOSA GOLF CLUB, SENTOSA ISLAND, SINGAPORE: The Serapong Course – one of two courses at the Sentosa Golf Club – lies on Singapore’s Sentosa Island, a former military base that is now a major resort island, the book reveals. Opened in 1982, it was ‘designed by American architect Ronald Fream, who transformed a former mangrove swamp into the lush fairways you see today’. Waldek says that the course was renovated in 2006 and 2021, with these revamps ‘contributing to the course’s high ranking on many of the world’s best lists’. She adds: ‘Serapong is best known as the home of the Singapore Open (since 2005) and for its astounding views of the Singapore skyline, especially from the third hole’ 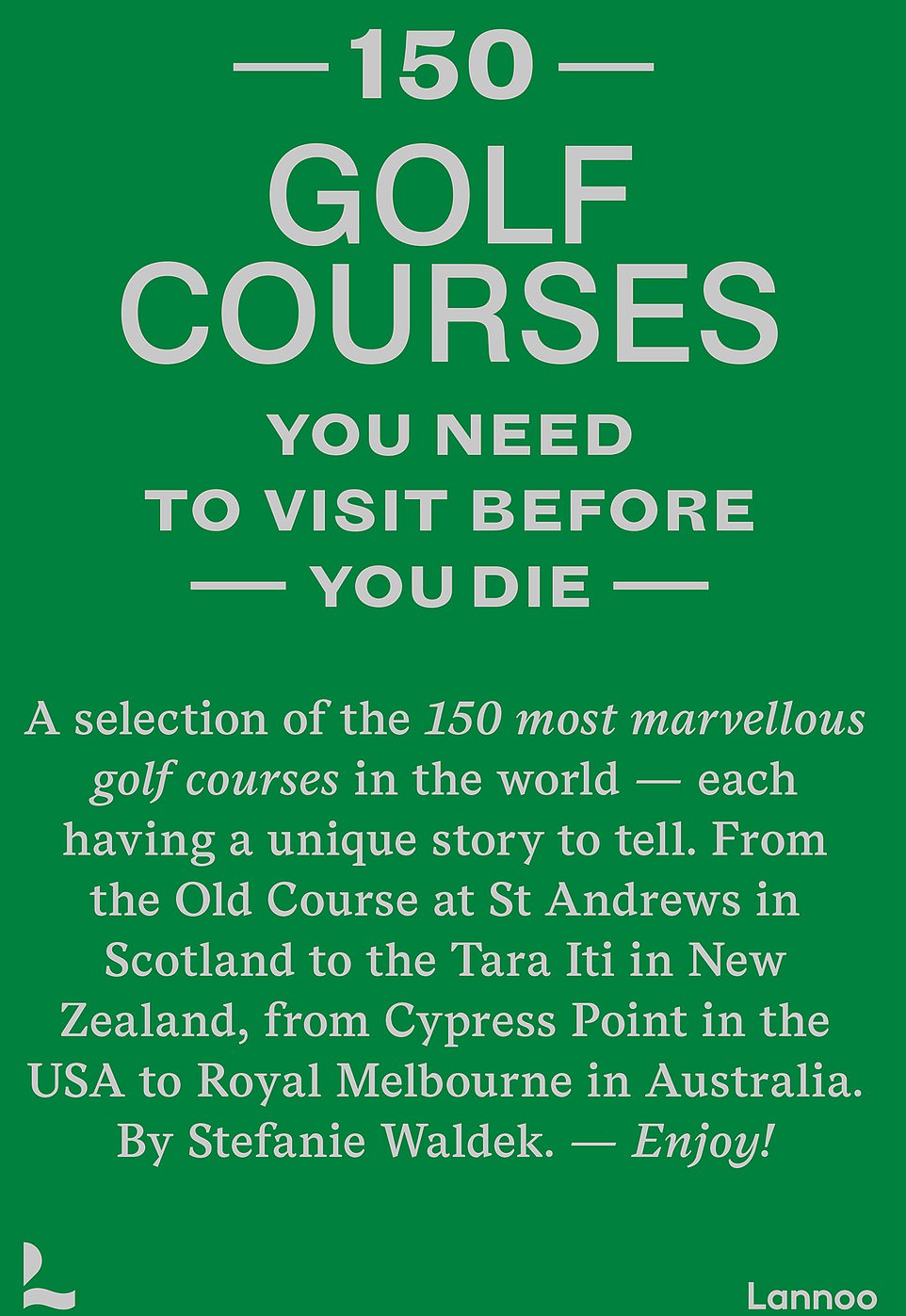