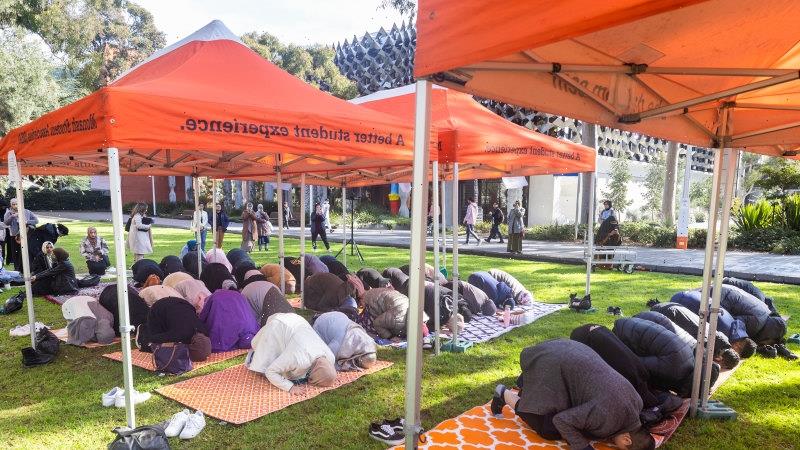 Islamic students at Monash University have vowed to pray outdoors on campus every day in protest against the university’s failure to provide a new dedicated prayer space.

They say that each day, hundreds of students cram into two small rooms designed for a maximum of eight people. 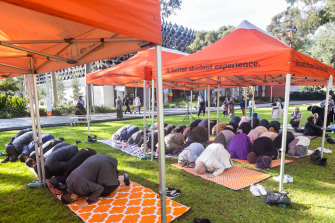 Students, who have been lobbying for a larger Muslim prayer space since 2018, were told last month that Monash University was “multi-faith” and any new communal space built there would be made available to all staff and students.

Those students said the refusal came just weeks after they were told two disused classrooms would be refurbished into prayer rooms.

Dozens of Muslim students took to one of the Clayton campus’ busiest lawns to pray on Wednesday, a public act of worship and protest they pledged to continue daily until their request was met.

“Monash is not providing adequate prayer space on campus for Muslims,” protest signs said. “So we are praying outside. Please walk around us.” 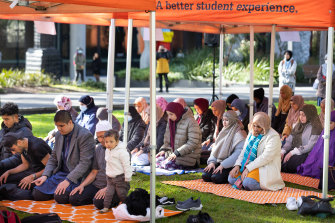 Dozens of Muslim students took to one of the Clayton campus’ busiest lawns to pray on Wednesday.Credit:Jason South

The prayer rooms were built decades ago and ordinarily accommodate eight men or eight women a room, although this has been reduced to five per room because of COVID-19 social-distancing protocols.

The space is used almost 2000 times a week by 233 students, a Monash University Islamic Society survey found in March.

A weatherboard house in a residential street near the university has also been converted into a mosque, though an Islamic Society spokesperson said it was remote from campus and rarely used.

An occupational health and safety report completed in 2018 found the small prayer rooms were poorly maintained, cluttered with trip hazards and had poor disability access.

“Muslim students on campus have just become so frustrated,” she said. “For five years, they’ve worked really hard to have a collaborative relationship with the university and explain what the problems are, and yet we are back at square one.”

De Silva said students were told in early June that two rooms in the Clayton campus’ Krongold Centre were available, only to be told days later that the rooms were required as classrooms.

“Unfortunately, the Krongold Centre is required for teaching, and at this time, and is not available for communal purposes,” Monash’s executive director campus community division Vladimir Prpich wrote.

“The university is multi-faith, and as such, any new communal spaces will be made available to all staff and students, aligning to this vision.”

De Silva said the university’s insistence that all new spaces must be multi-faith was confusing.

“The biggest faith space on campus is a chapel: it has pews, a large cross, there is no way it could be used by any other faith,” she said.

“We have been meeting with members of the Monash Islamic Society to discuss options for a fit-for-purpose prayer space at our Clayton campus to better meet our students’ needs,” she said.

“We most recently met with students a week ago and again today, and we are working to identify the most appropriate facility to ensure these students’ needs can be met in a sustainable way.”

Islamic Society vice president Fatima Ramtoola said males and females wanted to pray together, but were segregated in the prayer rooms.

She said the concept of a multi-faith communal room was impractical.

“A multi-faith prayer room is going to be very difficult to manage,” she said. “Different faiths have different requirements, and putting all these faiths in a room together and expecting us to be able to regulate it … we’re just really confused about how we would be expected to do that.”