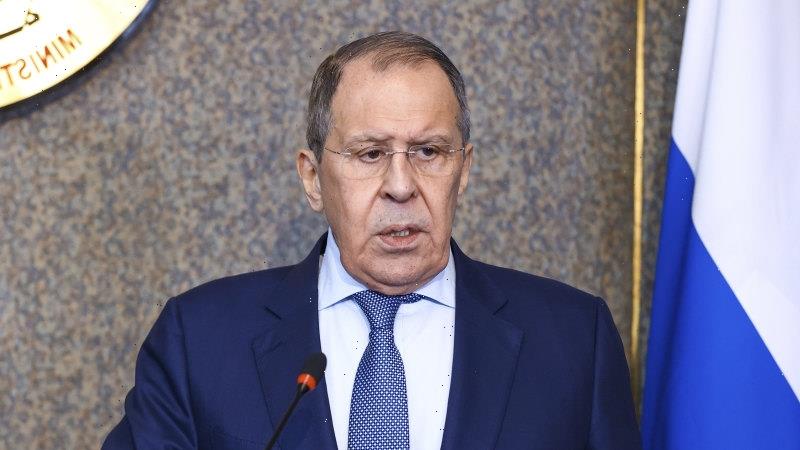 Kyiv: Russia’s top diplomat said Moscow’s overarching goal in Ukraine is to free its people from its “unacceptable regime,” expressing the Kremlin’s war aims in some of the bluntest terms yet as its forces pummel the country with artillery barrages and airstrikes.

The remark from Russian Foreign Minister Sergey Lavrov comes amid Ukraine’s efforts to resume grain exports from its Black Sea ports —something that would help ease global food shortages — under a new deal tested by a Russian strike on Odesa over the weekend. 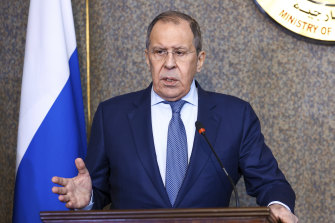 Russian Foreign Minister Sergey Lavrov: “We are determined to help the people of eastern Ukraine to liberate themselves from the burden of this absolutely unacceptable regime”.Credit:AP

“We are determined to help the people of eastern Ukraine to liberate themselves from the burden of this absolutely unacceptable regime,” Lavrov said at an Arab League summit in Cairo late Sunday, referring to Ukrainian President Volodymr Zelensky’s government.

Apparently suggesting that Moscow’s war aims extend beyond Ukraine’s industrial Donbas region in the east, Lavrov said: “We will certainly help the Ukrainian people to get rid of the regime, which is absolutely anti-people and anti-historical.”

Lavrov’s comments followed his warning last week that Russia plans to retain control over broader areas beyond eastern Ukraine, including the Kherson and Zaporizhzhia regions in the south, and will make more gains elsewhere.

His remarks contrasted with the Kremlin’s line early in the war, when it repeatedly emphasised that Russia wasn’t seeking to overthrow Zelensky’s government, even as Moscow’s troops closed in on Kyiv. Russia later retreated from around the capital and turned its attention to capturing the Donbas. The war is now in its sixth month.

Last week, Russia and Ukraine signed agreements aimed at clearing the way for the shipment of millions of tons of desperately needed Ukrainian grain, as well as the export of Russian grain and fertiliser.

While Russia faced accusations that the weekend attack on the port of Odesa amounted to reneging on the deal, Moscow insisted the strike would not affect grain deliveries.

During a visit to the Republic of Congo on Monday, Lavrov repeated the Russian claim that the attack targeted a Ukrainian naval vessel and a depot containing Western-supplied anti-ship missiles. He said the grain agreements do not prevent Russia from attacking military targets.

In other developments, Russia’s gas giant Gazprom said it would further reduce the flow of natural gas through a major pipeline to Europe to 20 per cent of capacity, citing equipment repairs.

The move heightened fears that Russia is trying to pressure and divide Europe over its support for Ukraine at a time when countries are trying to build up their supplies of gas for the winter.

Ukraine’s presidential office said Monday at least two civilians were killed and 10 wounded in Russian shelling over the preceding 24 hours. In the Kharkiv region, workers searched for people believed trapped under the rubble after 12 rockets hit the town of Chuhuiv before dawn, damaging a cultural centre, school and other infrastructure, authorities said.

Kharkiv Governor Oleh Sinyehubov said: “It looks like a deadly lottery when no one knows where the next strike will come.”

Ukraine charged two former cabinet ministers with high treason over their role in extending Moscow’s lease on a navy base in Crimea in 2010. Prosecutors said Oleksandr Lavrynovych and Kostyantyn Hryshchenko conspired with then-President Viktor Yanukovych to rush a treaty through parliament granting Moscow a 25-year extension, leaving Crimea vulnerable to Russian aggression.

Russia said it thwarted an attempt by Ukrainian intelligence to bribe Russian military pilots to turn their planes over to Ukraine. In a video released by Russia’s main security agency, a man purported to be a Ukrainian intelligence officer offered a pilot $US2 million to surrender his plane during a mission over Ukraine. The Russian claims couldn’t be independently verified.