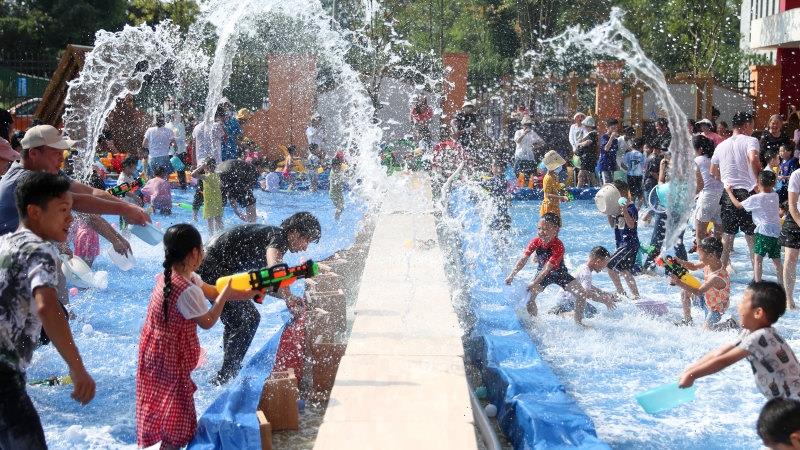 Beijing: China will suffer the return of more heatwaves over the next 10 days from east to west, with some coastal cities already on their highest alert level and inland regions warning of dam failure risks because of melting glaciers.

A sharp temperature spike was expected on the weekend, before building up into heatwaves, defined as periods of atypically hot weather of three days or more. Saturday was the day of the “big heat” in the Chinese Almanac based on the lunar calendar. 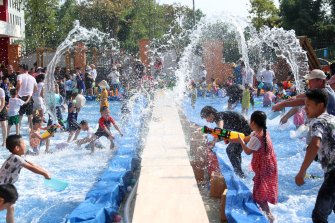 Children and their parents enjoy themselves at a kindergarten in Huaying, Sichuan Province, China.Credit:Getty Images

The hot spell is expected to be similar in scope to heatwaves from July 5 to17, but more regions could be hit by temperatures of 40 degrees or higher, Fu Jiaolan, chief forecaster at the National Meteorological Centre, told state media.

In the western region of Xinjiang, accelerated glacial melt through to July 29 poses risks to rivers and dams, the China Meteorological Administration said, warning particularly of a high risk of dam failure on a tributary of the Aksu River near the border with Kyrgyzstan.

This round of hot weather will have “a certain degree of impact” on the melting of alpine snow and ice, the administration said.

The heat this northern summer has been described as extreme. From June 1 to July 20, the Yellow River and Yangtze River basins – major centres of industry and commerce – were hit by at least 10 high-temperature days more than the norm. 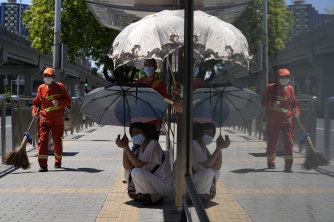 People shelter from the sun under umbrellas as they wait for a bus in Beijing.Credit:AP

Scientists caution that climate change will only make heatwaves hotter and more frequent.

The highest-ever recorded temperature in China is a matter of debate. According to Chinese media, the hottest period in the last 300 years was in July 1743 during the Qing dynasty, with a French missionary in Beijing said to have recorded an all-time high of 44.4 degrees. In 2015, a local news portal reported 50.3 degrees at a weather station near Ayding, a dry lake in Xinjiang’s Turpan Depression. 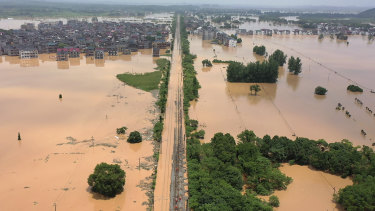 From the snowcapped peaks of Tibet to the tropical island of Hainan, China is sweltering under the worst heatwave in decades while rainfall hit records in June.Credit:Chinatopix/AP

Temperatures in the city of Turpan could reach 50 degrees next week, the administration said.

Some cities in Zhejiang province, home to many factories and exporters, issued red alerts on Friday, the highest in a three-tier warning system, forecasting temperatures of at least 40 degrees in the following 24 hours.

The load on the national power grid could reach a new high as demand for air-conditioning by homes, offices and factories surges, with safe operation facing “severe tests”, the Ministry of Emergency Management warned.

“For all of the factories in China and in Shanghai we have regulations that need to be followed,” said Leo Zhang, president of chemical product maker Sika China. 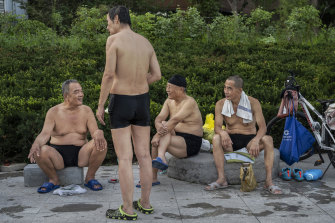 Swimmers chat at a popular swimming area next to the Liangma River in Beijing.Credit:Getty Images

“Every year we do things to make the work more comfortable, for example giving workers ice-creams when it gets too hot.”

Zhejiang, as well as parts of Fujian, Guangdong, Hunan, Jiangxi and the city of Chongqing, were at risk of forest fires in the near term, the ministry said.