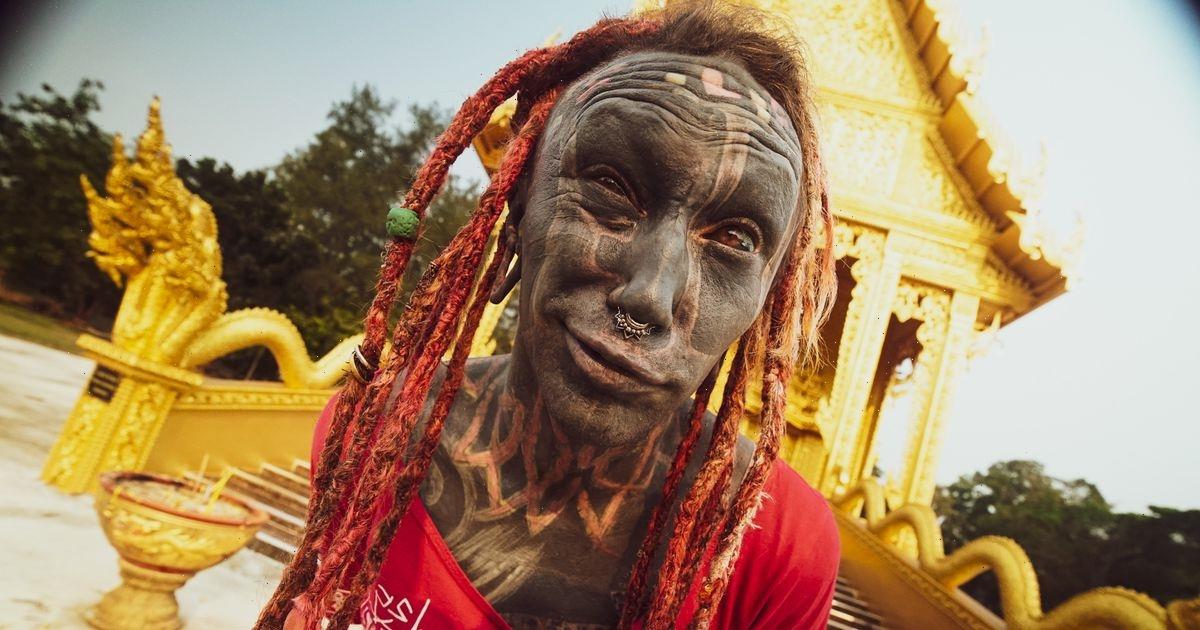 A trans woman whose body has been completely covered in tattoos said she's lost count of how many times she's been inked – and her look is so different that she even gets asked for selfies on the street.

Lily Lu has been a world-renowned tattoo artist for years, and she's bagged a few freebies along the way, which has played a big part in aiding her tattoo budget.

She loves getting inked – so much so that her entire body is plastered with intricate designs – and she's even had more tattoos layered on top of original designs to up the ink.

Some parts of her body are now covered with up to three layers of tats, and she admits the process becomes more painful each time.

Lily, from Germany, told The Mirror: "I pretty much ended up with 100% of my body covered, so it's in no way possible to count the tattoos.

"It's more than three layers over my entire body and I still collect a new one from time to time.

"For me, most of my tattoos have a deeper meaning – they are a memory of my past, like in a tribe when you earn a different piece for different stages of life.

"I walked a path on the edge of society for almost two decades and my ink symbolises multiple stages of me letting go of the normal ideology of life and the reality society teaches us."

Lily said over time she's learnt to walk away from what other people think – she said she treats her tattoos "more like a book", which are packed full of memories, tales and stories.

She admitted strangers would sometimes say hurtful things to her, and some wouldn't even go near her due to her extreme ink.

But now people seem to be more accepting, and she doesn't face criticism as often.

She continued: "I live deep in the countryside and in our town everyone knows me. My tattoo style is very special.

"It's very known and customers travel from all over the world to our small village.

"So here is probably the village in the world where 'freaks' get less stared at than anywhere else in the world.

"Besides this, I'm more in nature and I avoid people."

Lily said she's also noticed that people's reactions have changed over the years, as she said going back 15 years ago people would cross the road when they saw her to avoid walking near her.

Now some people will stop her to ask if they can take a selfie.

"Nowadays it's a lot more accepted in normal jobs and you are way less limited," she told The Mirror.

"What it also means for me is less freedom to express yourself, and go a radical step as the step isn't that radical anymore to get that heavily inked."

Lily was only 14-years-old when she first sat in the tattooist's chair, and she said she did it herself with a sewing needle and ink from a pen.

Since then she's gone on to have countless tats.

Lily said: "It was a long long time ago, before the internet and in that time it wasn't that easy to buy tattoo supplies or get any information about how it's done.

"I saw this documentary about a prison and they said how they tattoo with a sewing needle and ink from a pen and that night I started inking myself."

She added: "At 15 I built a machine out of an old electric razor and at 16 I start tattooing friends as well.

"There are many very painful places on the body, the entire face, in the ears, in the palm of the hands, under the feet.

"I got ink under my fingernails, eyeballs, my tongue, and in my mouth, obviously the genitals and anus are very very painful and also the healing of the tattoos can be very painful and long as well."

Lily said she remembers it being less painful when she was younger and had less tattooed skin.

She said it feels more sensitive now to tattoo again and again, but she thinks it's more a "mental thing."

Lily shares videos about her lifestyle on YouTube, and you can view them here.