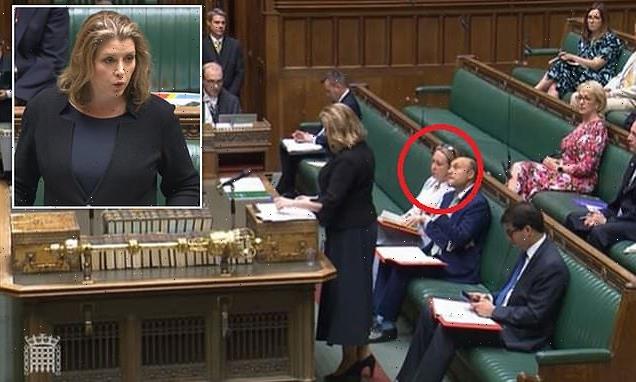 Penny Mordaunt took an extra-ordinary swipe as her Tory boss today – while sat next to her – as the fallout from the bitter Conservative leadership contest spilled over into the Commons.

Ms Mordaunt, who was ousted in the fifth round of voting yesterday, returned to her day job as an international trade minister and lashed out coldly at Anne-Marie Trevelyan.

The International Trade Secretary backed rival Liz Truss in the leadership campaign, and this week criticsed Ms Mordaunt over her work ethic.

Ms Trevelyan said that other ministers had sometimes ‘picked up the pieces’ because Mordaunt ‘hasn’t been available’.

And the comment clearly rankled. Responding to a question from her ally Andrea Leadsom at international trade questions this morning, Ms Mordaunt said: ‘I am sort of amazed to find myself here this morning given my reported work ethic. But I am here.’ 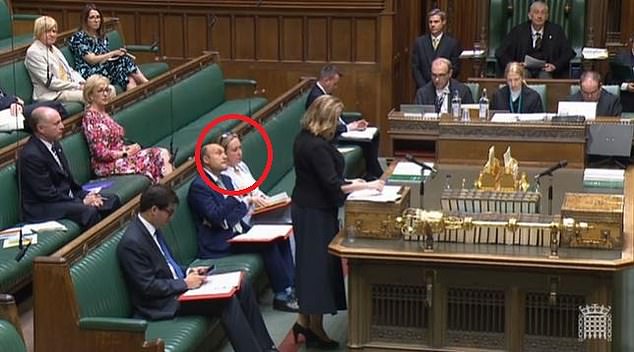 Ms Mordaunt, who was ousted in the fifth round of voting yesterday, returned to her day job as an international trade minister and lashed out coldly at Anne-Marie Trevelyan (circled). 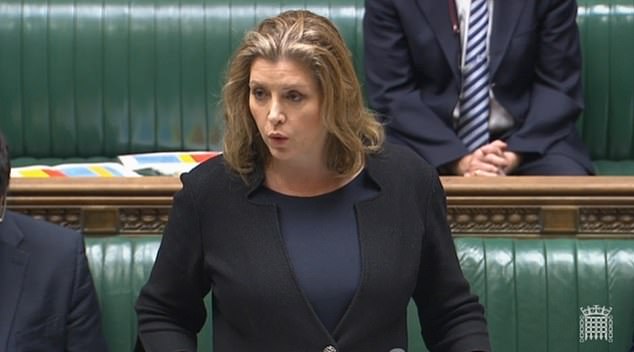 Responding to a question from her ally Andrea Leadsom at international trade questions this morning, Ms Mordaunt said: ‘I am sort of amazed to find myself here this morning given my reported work ethic. But I am here.’

Ms Mordaunt aimed a further dig at Ms Trevelyan after Labour criticised the Department for International Trade for a ‘truly shameless attempt’ to ‘dodge any form of scrutiny’ over the UK-Australia free trade agreement.

Shadow trade minister Ruth Cadbury said the department had ‘swerved’ eight invitations to attend the Commons International Trade Committee and had avoided holding a vote on the deal ahead of its ratification.

Ms Trevelyan was accused earlier this week of having ‘bottled’ appearing before MPs to discuss the deal.

Ms Mordaunt, in her reply, said: ‘For my own part, every single time the International Trade Committee or other body of this House has asked me go before it, I have.

‘I think that’s the attitude of the ministerial team and we will continue to do that.’

Supporters of the trade minister also lavished praise on her as she returned to her frontbench duties in the House after being knocked out of the Conservative Party leadership race.

Ms Mordaunt also used trade questions to confirm the UK is negotiating with 25 of the 50 American states in a bid to agree economic pacts.

Tory former minister Dame Andrea Leadsom, a key backer of Ms Mordaunt, told the minister: ‘Can I pay tribute to my right honourable friend for a fantastic and brave and clean campaign for the leadership of the Conservative Party and to be prime minister.’

Shadow international trade secretary Nick Thomas-Symonds said: ‘I welcome the Member for Portsmouth North back after her efforts in the Tory leadership contest.

‘But the Secretary of State is far less complimentary about her efforts in the department.’

Mr Thomas-Symonds went on to read out the criticism made by Ms Trevelyan.

As Tory MPs aimed shouts of ‘shameful’ at him, he pointed out: ‘They shout ‘shameful’ at me – these are the Conservatives’ words about each other, not my words.’

Ms Trevelyan replied: ‘I have a fantastic team of ministers, which is exactly why we’re able to do all we can to make sure that our UK businesses have access to UK support and Government support to get their fantastic goods and services across the world.’

Conservative Alicia Kearns said of Ms Mordaunt: ‘I’ve always been struck by the Member for Portsmouth North’s quiet diligence in doing her job.

‘So can she please update me on the progress of signing individual deals with US states, which my farmers in Rutland and Melton are particularly interested in.’

Ms Mordaunt replied: ‘This week we have continued our negotiations with Utah, and yesterday we also signed the second state level MOU (memorandum of understanding) with North Carolina, which will be based on green growth.

‘We are currently negotiating with half of all US states.

‘The first eight deals we will sign will be covering 20 per cent of the US economy and this will open up procurement, enable mutual recognition of qualifications, and enable British businesses to take a larger share of both goods exports and also exports of services.’

Conservative former minister Tim Loughton noted Ms Mordaunt is ‘allegedly work shy’ as he praised her work with the American states, joking: ‘Think what she could achieve if her focus was on the job.’