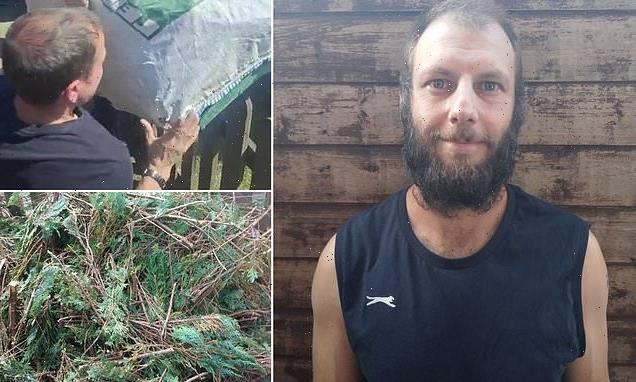 Pictured: Tree surgeon who dumped a ton of trimmings on woman’s lawn after she refused to pay £40 because her conifer resembled a ‘Christmas tree’ – as he now faces demands for compensation over his workmanship

A tree surgeon who dumped more than a quarter of a ton of trimmings onto a customers lawn has been pictured for the first time – as his client said she wanted compensation.

Footage of Jamie Young of A1 Tree Surgeons of Whitworth Lancashire and pals tipping two bulging sacks of waste over a woman known only as Chrissie’s fence made headlines yesterday.

Mr Young claimed his stunt was a message to customers who think they can avoid paying for jobs, as four days after pruning the 57-year-old’s she complained and refused to cough up the cash.

Chrissie now claims she’s seeking compensation for ‘damage done’ as the tree is ‘ruined’ and looks ‘nothing like’ the Christmas tree shape she wanted it in and more like a ‘bush’.

However, the firm have repeatedly refused to pass over their insurance details or proof of Jamie’s qualifications and even labelled her ‘desperate’ for wanting to claim on a £40 job.

After spotting the two heaps of trimmings on her lawn on Saturday, Chrissie threatened to take action again as she claimed the garden waste was ‘blocking access to her property’.

The 57-year-old has since hit back at the firm to blast their ‘arrogance’ as another reason she still hasn’t paid for the job, completed on July 11.

She insists the money was in an envelope on her table that day, but their reaction to her complaint stopped her from offering to pay 80% of the agreed £40. 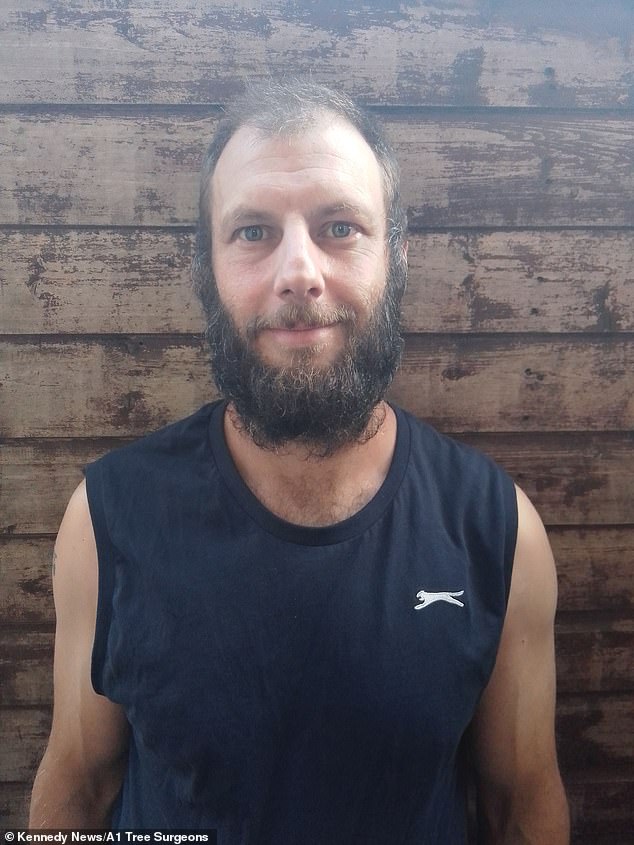 Boss of A1 Tree Surgeons Jamie Young, 37, said returning waste had been the ‘last resort’ 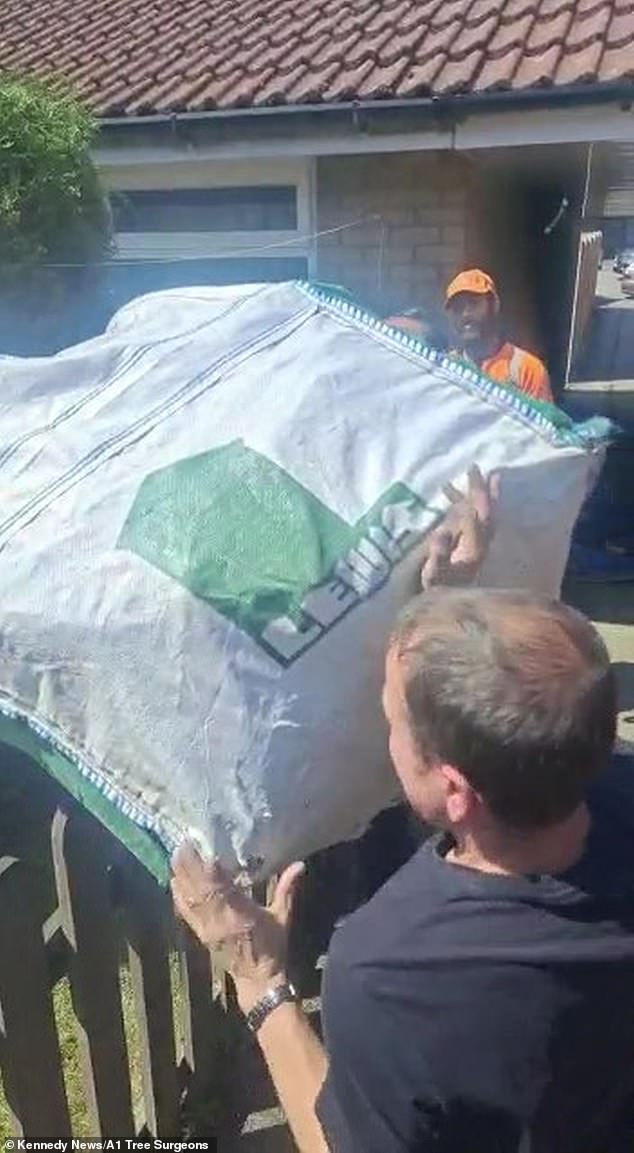 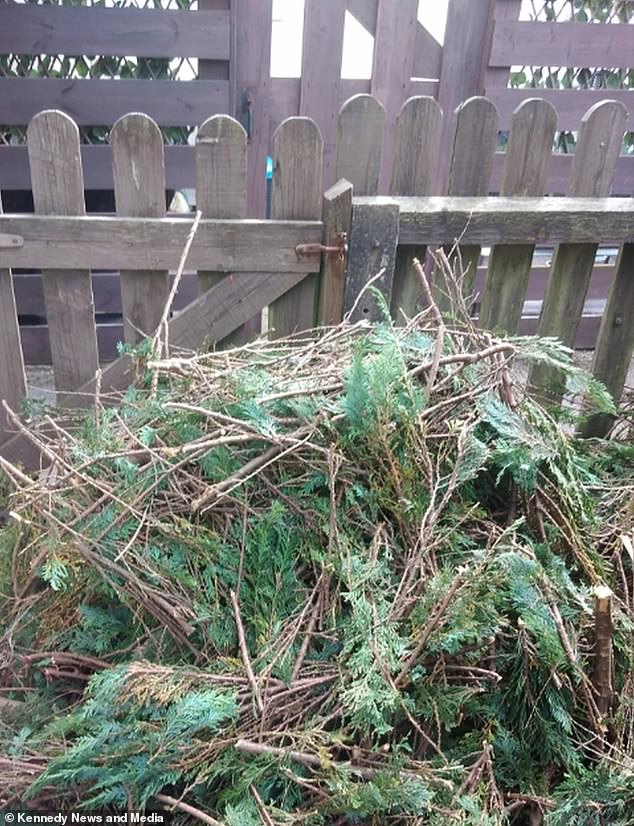 Chrissie says Jamie never warned her it could not be a tree shape and maintains ‘if he’s a fully qualified tree surgeon, he should know what shape it should be’.

Reacting to the viral video, which she finds ‘too hard to watch’, she claims Jamie ‘took things to the extreme’ and believes ‘it’s made them look worse’.

Chrissie said: ‘I just told him I wanted it trimmed back. I didn’t say I wanted it to change [shape]. If he’s a fully qualified tree surgeon he should know what shape it should be.

‘He didn’t explain he wouldn’t be able to do it like a Christmas tree because I wouldn’t have asked him to touch it if he’d have said that.

‘It’s not a hedge, it’s not a bush, It’s a conifer tree. I don’t believe I need to pay because it wasn’t the job I asked for.

‘It’s not the same tree anymore. It’s totally different. If you look you look at what that type of tree should look like, it’s like a Christmas tree. This is more like a hedge or a bush.

‘It’s a conifer but he’s cut it like a hedge or a bush. He’s not cut it like a standalone tree and he’s not done a very good job of it anyway.

‘The money was sitting in an envelope, and I was going to offer to pay 80% but then we had a conversation and they were arrogant in their messages to me. 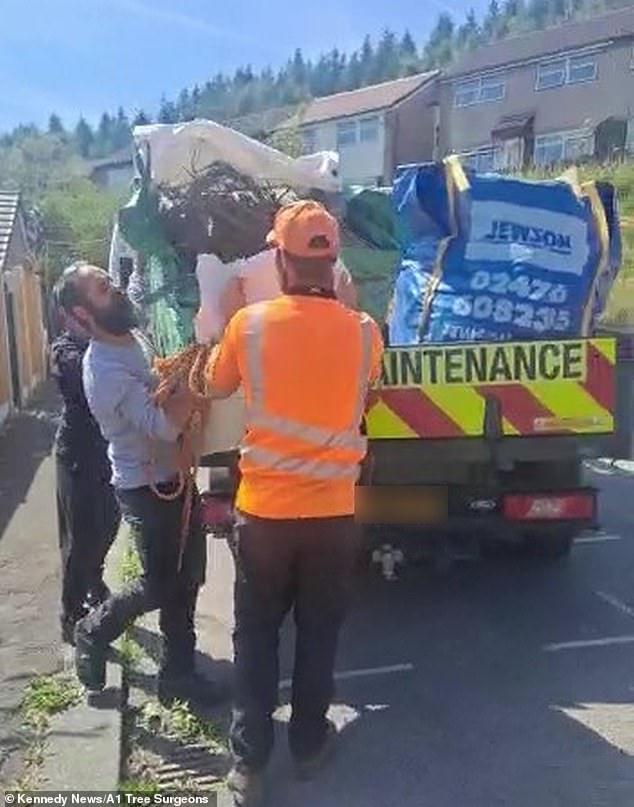 Boss of A1 Tree Surgeons Jamie Young, 37, and two helpers, can be seen in a video lugging two bulging sacks of hedge trimmings from his truck and tipping them over the customer’s fence on the outskirts of Rochdale, Manchester 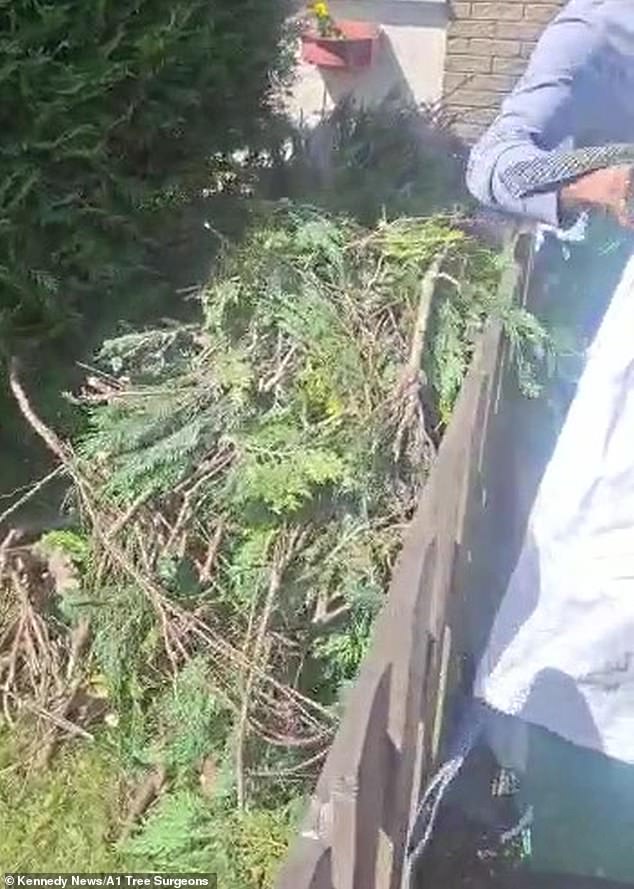 Mr Young claims the woman ‘hid in her house’ when they came to collect the cash, which she denied after the video was shared on social media, claiming the money was ‘sat waiting’ for the tradesmen

‘He’s now taken things to the extreme. It’s crazy to be honest. It blocked the access gate.

‘It’s made them look worse because it’s disgraceful. I haven’t actually watched the video. It’s been too hard to watch. I’m shocked.’

Jamie’s viral clip of him dumping the trimmings has been viewed more than 40,000 times on Facebook, with people praising the dad-of-five’s actions, claiming he’d done a ‘great job’.

He insists dumping the clippings didn’t give him any personal satisfaction, but he felt he needed to share the message that the customer’s alleged actions aren’t acceptable.

Jamie, from Lancashire, said: ‘[Tree surgery] is something I’ve been doing all my life and a few professional gardeners have told me there’s nothing up with [the tree].

‘I explained when I was quoting that you can’t have a conifer at a point when they’re pruned.

‘You can’t make something look like a Christmas tree when it doesn’t want to be because they’re all dead inside.

‘I think she thought she’d rip me off and if I kicked up a fuss it’d look bad on me – but she thought wrong. It backfired.

‘This was a last resort to get my point across that it’s not on. It lets people know it’s not on and it’ll fire back on you. I don’t think she realised how far it’d go.

‘I don’t expect a penny until people have seen the job and they’re happy with it and that’s how I’ve always worked.

‘The woman was in but didn’t come out. I thought that was weird, like she was hiding.

‘If you let one person do it then I’ll have one a week to try to do it, loads of tradesmen have said the same. It’s nothing to do with the money, it’s the principle.

‘Her attitude was all wrong, so I just thought ‘you can have your cr*p back’.’

Other texts show Chrissie’s initial complaint, where she claimed the job ‘resembles a part of someone’s hedge’ and confirms she won’t pay the £40.

The firm responds to tell her they’ll be returning trimmings to her garden, and warns that her refusal to hand over the cash means she ‘can’t complain’.

Frustrated Jamie says customers refusing to pay could ‘shut someone’s business down’ if the sum disputed is higher.

He has been a tree surgeon for 15 years and has been running A1 Tree Surgeons for the past five, yet he claims it’s the first time he’s had to resort to such drastic measures.