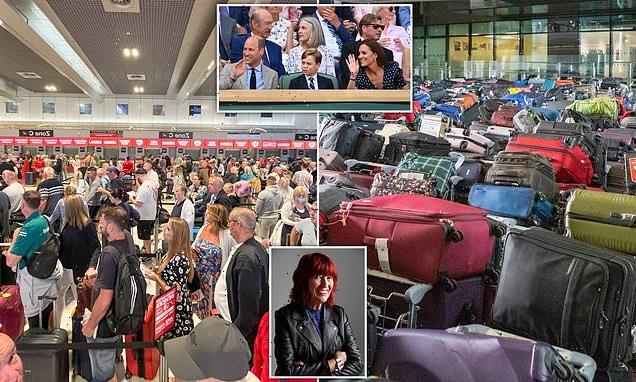 JANET STREET-PORTER: I’m a Celebrity was a piece of cake compared to Heathrow’s two-hour queue. And as William and Kate were whisked away by helicopter, my holiday had a less glamorous start – in the airport chaos that shames Britain

Yesterday, I arrived at Heathrow Airport for one of the most unpleasant experiences of my life.

Trying to leave the country on a British Airways flight.

Shortly afterwards, William and Kate, their children and the family dog were starting their holidays – crossing the back garden at Kensington Palace to hop on a privately chartered helicopter and be whisked away for a summer break.

No queues for them.

Jealous? Of course I am.

Air travel for the rest of us is dramatically different experience.

The two-and-a-half weeks I survived in I’m a Celebrity were a piece of cake compared to the misery of two-and-a-half hours shuffling in in a queue at Terminal 3 yesterday.

Travelling through Heathrow Airport is a form of torture.

The chaos, the queues, the tantrums, the lack of food and water, and the huge baggage mountain hidden from view somewhere inside the building have made news headlines all around the world.

And those scenes are mirrored all around the country as we entered the peak of the holiday season – at Gatwick, Manchester and Birmingham.

Instead of happy folk excited at the prospect of a much longed-for break, we see downtrodden, crumpled defeated souls. Forced to inch one small step at a time forward towards their goal – the departure lounge. Images being shown around the world which shame our travel business. 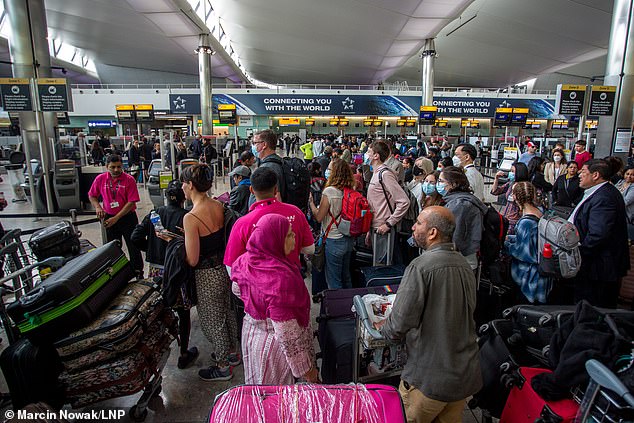 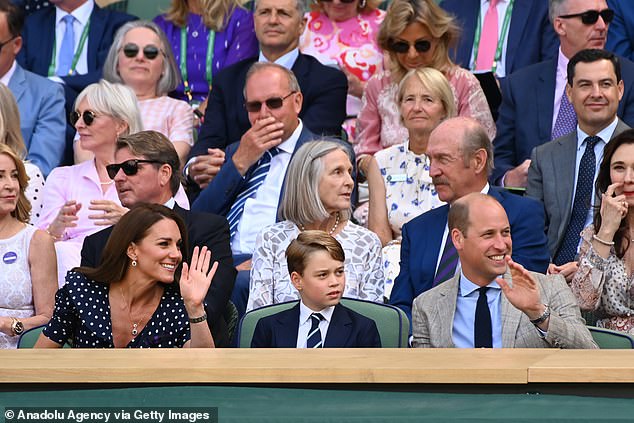 William and Kate, their children and the family dog were starting their holidays – crossing the back garden at Kensington Palace to hop on a privately chartered helicopter and be whisked away for a summer break. No queues for them

Come to Britain? Don’t make me laugh- our biggest airport looks like a tin pot destination in a fifth-world dictatorship, run by idiots who couldn’t organise a queuing system for penguins.

The queueing at Heathrow, along with the hidden thousands of unclaimed and lost bags, are terrible publicity for British tourism bosses attempting to entice foreign visitors to Britain after the ravages of Covid.

And even worse for all the plucky Brits hoping to go on long-awaited holidays as the schools break up for the summer.

While William and Kate sat back and enjoyed the view over Hyde Park, I was looking at the back of the bloke in front. My long march started two hundred yards from the outside of the terminal building, past the taxi drop-off points. Grim enough, but for some unlucky folk – brave enough to risk checking in a piece of luggage – it was the second queue of the morning.

Here’s my advice for anyone preparing to use a British airport this summer.

Listen to a contemplative app on your phone, just hoping the battery doesn’t die and with it your online boarding pass.

You will have to meditate to stop screaming abuse at the *******s responsible for your misery.

It might be 30 degrees but ration your precious bottle of water. Any lone traveller must order their body functions to partially shut down. Toilet trips rely on trusting a fellow traveller to save your slot.

When I finally inched my way into the Terminal 3, it was curiously empty.

Because it offered no services whatsoever. No help. Just staff issuing the order to join the queue outside.

Not handing out bottles of water.

Not picking out the elderly and putting them to the front.

My queue of mums and dads, children, babies, and old people were amazingly good natured, stunned into silence at the horror of what they were going to have to knuckle down and accept or miss their holiday.

We snaked up and down the length of the terminal in a mindless route devised by a simpleton. Finally, we zig-zagged into a small space where a single member of staff channelled all the exhausted passengers onto a SINGLE escalator up to the first floor, all others being blocked off. There was no end in sight.

Upstairs, the queue was divided into ‘Fast Track’ and the rest, stretching as far as the eye could see. The shops were closed.

As hilarious as ‘priority boarding’.

On reaching security, only two out of three machines were operating, although the staff were fast and efficient and pleasant.

Having got through to departures, I needed to lie down in a darkened room with a wet flannel over my eyes. Unfortunately, there was further hanging around to board the plane, which involved a bus in 30 degrees. By the time I got to my vastly overpriced seat, I needed intravenous gin, not a mini bag of nuts and second-class warm wine.

So, whose fault is this ghastly situation?

And will it get even worse by next week when all the state schools break up? 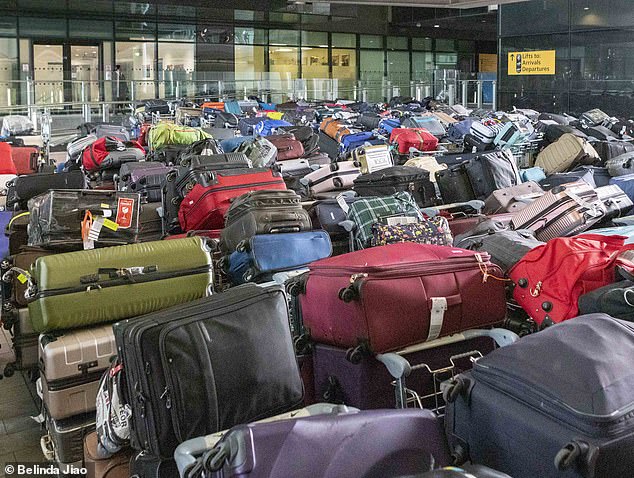 The queueing at Heathrow, along with the hidden thousands of unclaimed and lost bags, are terrible publicity for British tourism bosses

The airline industry and our major airports have lurched from one crisis to another. They laid off too many staff during Covid to cut costs. They found it hard to recruit and train new people, even though (belatedly) Grant Shapps tried to streamline the vetting process.

But it still takes three months to recruit, vet and train security staff and baggage handlers. Heathrow, Gatwick and Manchester all say they have hired 400- 500 new staff, if so, the results don’t seem evident.

Technical glitches have blighted British Airways, with dozens of flights cancelled around Easter and at peak times.

We, the passengers, are treated like dumb cattle who will put with with horrific queueing and no amenities just because we are foolish enough to want to go on holiday by air.

I had been hopelessly optimistic – I’d splashed out and upgraded to business class, naively thinking that by getting a ticket which said ‘priority boarding’ I might avoid the hours of trudging.

Earlier this week, the boss of Heathrow said they were limiting the number of passengers going through the building to 100,000 a day until September 11th and cancelling flights in order to deal with queues and delays.

This has meant dozens of flights being cancelled without warning, affecting the summer holiday plans of over 91,000 people.

And it’s not going to get better. Now, the airport is begging airlines to STOP selling tickets, as they’ve calculated that there are still 4,000 seats available each day, taking over their acceptable capacity.

Along with the prospect of queueing, now passengers must spend (as I did) 48 hours before they fly anxiously waiting to see if their flight will be cancelled. And so you arrive (having ditched check in bags) after a sleepless night, hardly in any fit state to embark on the marathon ahead.

Willie Walsh (the former boss of BA) says that Heathrow ‘got it wrong’ by failing to predict the upsurge in demand. The boss of Heathrow has apologised for his ‘difficult’ decision to cancel flights.

Only a mug would want to visit Britain at the moment.