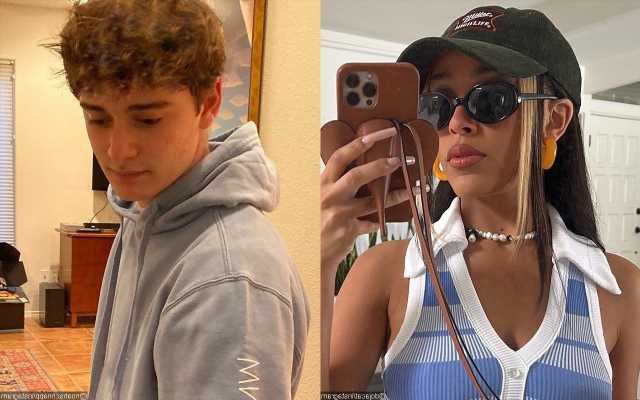 Meanwhile, things go different with the Will Byers depicter on ‘Stranger Things’ since his Instagram followers increased from 24.25 to 25.17 million in less than a week.

AceShowbiz –Doja Cat‘s drama with Noah Schnapp has cost her her social media followers. Days after slamming the “Stranger Things” star publicly for exposing her DMs about Joseph Quinn, the “You Right” singer lost around 200,000 followers on Instagram.

According to Social Blade, a social media analytics company, Doja’s initially boasted 24.34 million on the platform but it dropped to 24.14 in less than a week. Things went the other way around with Noah, whose followers increased from 24.25 to 25.17 million within that same time.

The drama between the two started after Noah shared a TikTok video in which he revealed Doja wanted to slide into Joseph’s DMs. In Doja’s first message to Noah, she wrote, “Noah can you tell Joseph to hmu?” She quickly followed up with an important question, “Wait no. Does he have a girlfriend?”

Noah then responded, “LMAOO slide into his DMs,” to which Doja replied, “I don’t know his Instagram or his Twitter. He doesn’t have a DM to slide in.” Noah then sent over Joseph’s Instagram profile to Doja. “Right here ma’am,” he added.

The clip has since gone viral, and Doja was not amused by it. Hopping on Instagram on July 7, she told her fans to not go after Noah, since he’s young and might not have understood what he was doing when he posted their DMs. “I think that, to be fair, let’s try to be chill about it,” she began. “Like Noah is a kid, but, I don’t even know how old he is, but he can’t be over — like there’s no way he’s over 21.”

Doja then changed her tone on the situation. “The fact that Noah did that, like went and posted a private conversation between me and him is so unbelievably socially unaware and wack,” the “Planet Her” artist fumed. “That’s like borderline snake s**t, that’s like weasel s**t.”

“And I’m not saying that that encapsulates his entire personality — like I don’t imagine Noah that way. Maybe he is, like a whole snake. But I didn’t see him that way,” the singer/rapper stressed. “I made an assumption that he was gonna be chill about it and he went and shared information that I didn’t feel comfortable with him sharing.”